Technical Change Control enables you to control all software and configuration changes to your IT landscape. Both SAP Cloud ALM and SAP Solution Manager support it, but differently. Understanding the difference is another aspect relevant for your decision which ALM platform to choose for your SAP S/4HANA Cloud solution. In this blog post, I will briefly explain the different technical change control concepts of SAP Cloud ALM and SAP Solution Manager. This is another component of my blog series ALM for SAP S/4HANA Cloud.

Technical changes are managed by the systems themselves. If you make a change on a development system, it will be put into a transport and moved to the quality assurance and later to the production system by transport management. However, there might be dependencies between individual changes. Technical change control helps to manage these dependencies. You can orchestrate heterogeneous transport mechanisms to accelerate the delivery process. And you can increase transparency and reliability of changes and upgrades.

In SAP Cloud ALM, so-called Features are entities for change documentation and deployment orchestration. They are containers to collect information on changes and to trigger the deployment of assigned transports throughout your system landscape. Besides a simple description, you can relate features to work streams, user stories, or project tasks for documentation purposes.

Some quality control is included in Features. Before triggering the deployment of changes in a feature, SAP Cloud ALM checks if any assigned transport is in a failed status. You must correct all transport errors before you can deploy the feature to the next stage. And deployment to the production system will only work after you have set the feature status to “Ready for Deployment”.

SAP Solution Manager uses Change Documents as equivalents to Features. A Change Document documents the activities of the users that are involved in the change process, for example developers, testers, and system administrators. A change document is created automatically by the system when a change manager or another employee responsible approves a request for change.

Traceability is crucial for technical change control. You, your colleagues, or even external auditors might want to know who has approved and who has executed the changes when.

SAP Cloud ALM has a standard workflow for features:

You can look at the history of a feature to see which user did which change at which time. This covers both content and status changes. With this, you have a kind of audit log.

It is possible to adapt these workflows to your own requirements. For example, you can include additional approval steps or electronic signatures in the workflow if this is required by regulations applying to you.

Besides orchestrating and tracing the deployment of transports, you might want to have additional quality checks to avoid disruptions through transport errors. And if you have a more complex system landscape, additional support is valuable as well.

With SAP Solution Manager and the add-on Focused Build, you have more possibilities for deployment control. 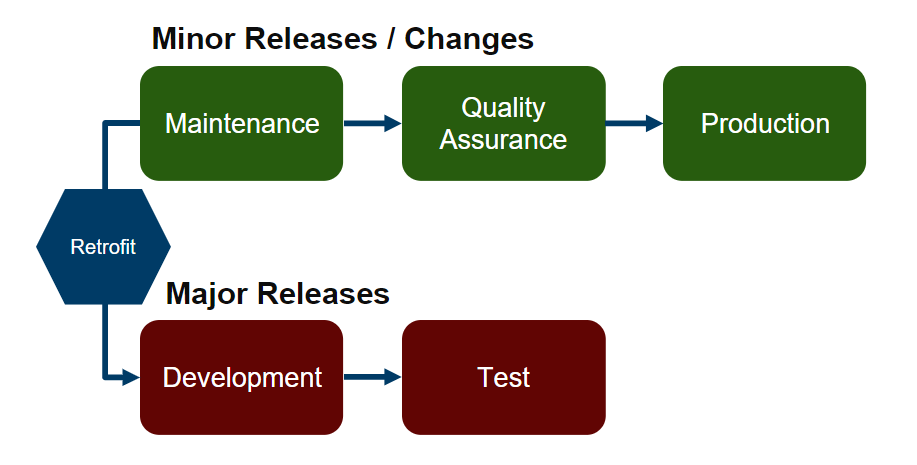 As a relatively young product, SAP Cloud ALM does not provide such additional quality control yet. And there is no additional support so far for managing more complex landscapes, like dual system landscapes. You must manage such situations directly on your SAP S/4HANA Cloud system.

Release management is another feature provided by both SAP Solution Manager and SAP Cloud ALM, but differently. It takes care of managing the successful deployment of related changes. The release sets the timeline for deploying the contained changes.

With Release Management in SAP Cloud ALM, you can assign multiple projects to one release. All projects of a release have the same timeline. Each release has one or multiple release versions. These are required for agile projects, where the project result is delivered in multiple steps.

Release Management in SAP Solution Manager is much more mature than in SAP Cloud ALM currently. It provides tight integration between Release Management and general project scheduling. And it offers additional control for all activities required to manage a release successfully. Changes within releases are covered as well, e.g., when a development needs to be shifted from one release to another due to a delay in development. With SAP Cloud ALM, you would need to handle this directly in the transport management system of SAP S/4HANA Cloud, Private Edition.

And this is just the technical change control point of view. You should align it with other aspects discussed in other blogs, like e.g., the cost of the ALM solutions.

I hope you enjoyed reading this blog post. What’s next?

Great entry! Are there any plans to have the Transport Execution Analysis migrated to Cloud ALM in the Support Services toolbox?

Hi Alexandre, thank you for your feedback. Regarding Transport Execution Analysis (TEA): This is not on our current one-year development roadmap. But we will enhance the functional scope further in the future. Which features will be first depends on customer feedback. So I can’t say when TEA will be available in SAP Cloud ALM.