Cultures@SAP: The Heart and Soul of a Global Success Story

Cultures@SAP, a grassroots Employee Network Group (ENG) within SAP, was founded back in 2006 in Walldorf with the motto “From employees for employees.”. The 40 communities that comprise Cultures@SAP have become a central contact point for anyone in the SAP world who wants to embark on or share a journey to understanding and appreciating foreign lands and diverse cultures – both in a professional and private way.

The network offers events and activities open to all employees at SAP; connecting employees (and their families and friends) with a variety of cultural backgrounds around the globe. Events such as the annual themed evening celebration, where diverse traditions and cultural highlights from home countries form the core of the event put on by Cultures@SAP Communities members on a volunteer basis.

In addition to all of these activities, it’s also about spending time together, getting to know our differences, discovering common ground – and having fun.

The greatest asset – and the heart and soul of Cultures@SAP – are our committed community members who have been involved with passion and enthusiasm, for more than 16 years now.

Cultures@SAP, a grassroots Employee Network Group (ENG) within SAP, was founded back in 2006 in Walldorf with the motto “From employees for employees.”

How It All Began …

In 2006, the newly formed Diversity Office asked Dr. Fariba Jafar Shaghaghi (Iran) to create a poster on “Cultural Diversity at SAP” to show some key facts about cultural diversity at SAP. But Fariba was of the opinion that the cultural diversity of a company that united more than 80 nations in Walldorf could be better and more broadly represented by an active network of employees. This was the birth of the idea behind “Cultures@SAP.” Fariba went in search of like-minded colleagues that were active in their international communities and was able to form a small cohort with Amogh Umbarkar (India); Amy Funderburk (USA); Jerome Monteu Nana (Africa); and Peide Wang (China). At the time, these colleagues were already informal “leads” of their national communities of fellow colleagues working in Germany, who maintained the connection to their home countries and cultures through recurring lunches, holiday celebrations, and other activities. To that end, the first communities to come together officially as “Cultures@SAP” were Africa, China, India, Iran, and the United States, representing the many thousands of “foreign” employees in Walldorf and Rot.

In 2009, Cultures@SAP received third prize in the German government’s “Diversity in the Workplace” competition. With representatives from Ford and Lufthansa (first and second place, respectively), four members of the original Cultures@SAP Core Team (along with Nadja Alber from SAP Family&Career) took part in an award trip to Berlin to meet with government representatives on the subject of diversity at work – and of course, we were also able to enjoy sightseeing of the important highlights of the federal capital. SAP was also one of the original signatories of the Diversity Charter in Germany. Since the first Multicultural Evening Celebration in 2007, the network has grown steadily in number and scope. Currently, there are already more than 40 communities (including an active German community) representing countries or regions with employees in Germany.

SAP employees, their families, and friends were invited to this event in 2007, and several hundred colleagues attended. This active engagement was the first sign of success for the network. In the decorated cafeteria in Walldorf, Germany, each participating community hosted a decorated stand with homemade (and self-financed) culinary specialties and country-specific cultural activities. A special age-appropriate program was also offered for children under 12 and has since become an integral part and highly anticipated element of Cultures@SAP events. 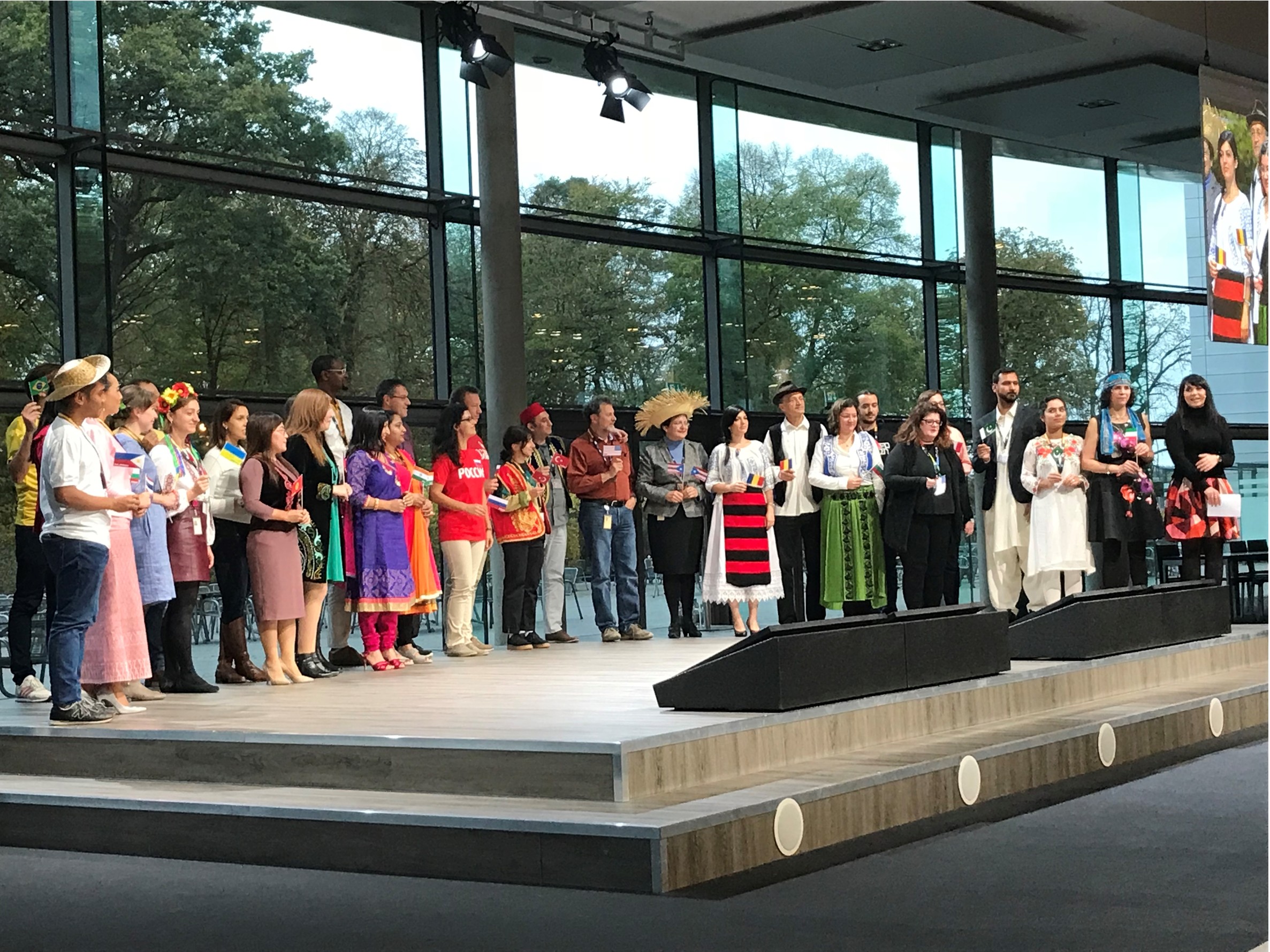 The Cultures@SAP events have gained a lot of popularity over time. In the first 10 years, SAP employees were able to invite their extended families/friends (including grandparents) to the themed Multicultural Evening Celebration. In 2015, the number of participants reached over 3,000 (including 500 children). Due to the limited capacity of the cafeteria, and for safety reasons, the number of guests has since been limited to employees and their immediate families.

In the evening events, the network community coordinators and their families and friends share their talents (such as singing, dancing, cooking, calligraphy, and much more) with the guests and present a variety of cultural highlights from their home countries. The Multicultural Evening Celebration is a trip around the globe in one shared space. In addition, countries or regions are also the focus of special themed evening events for a specific holiday or cultural highlights – such as Norouz, July 4th, Diwali, and Chinese New Year, to name a few.

To get an impression of the atmosphere at these events, take a look at this video from the Multicultural Evening Event in 2012 where the theme was “Heroes and Legends.”

In 2012, Cultures@SAP celebrated the opening of the Intercultural Lounge in building 18 in Walldorf. This space is not just a place where the coordinators of the communities meet regularly. Language courses, book club, breakfasts, tea ceremonies, and other small events are also held or hosted here. The lounge with its glass walls and showcases artifacts and cultural objects from all over the world invites visitors to linger and mingle. 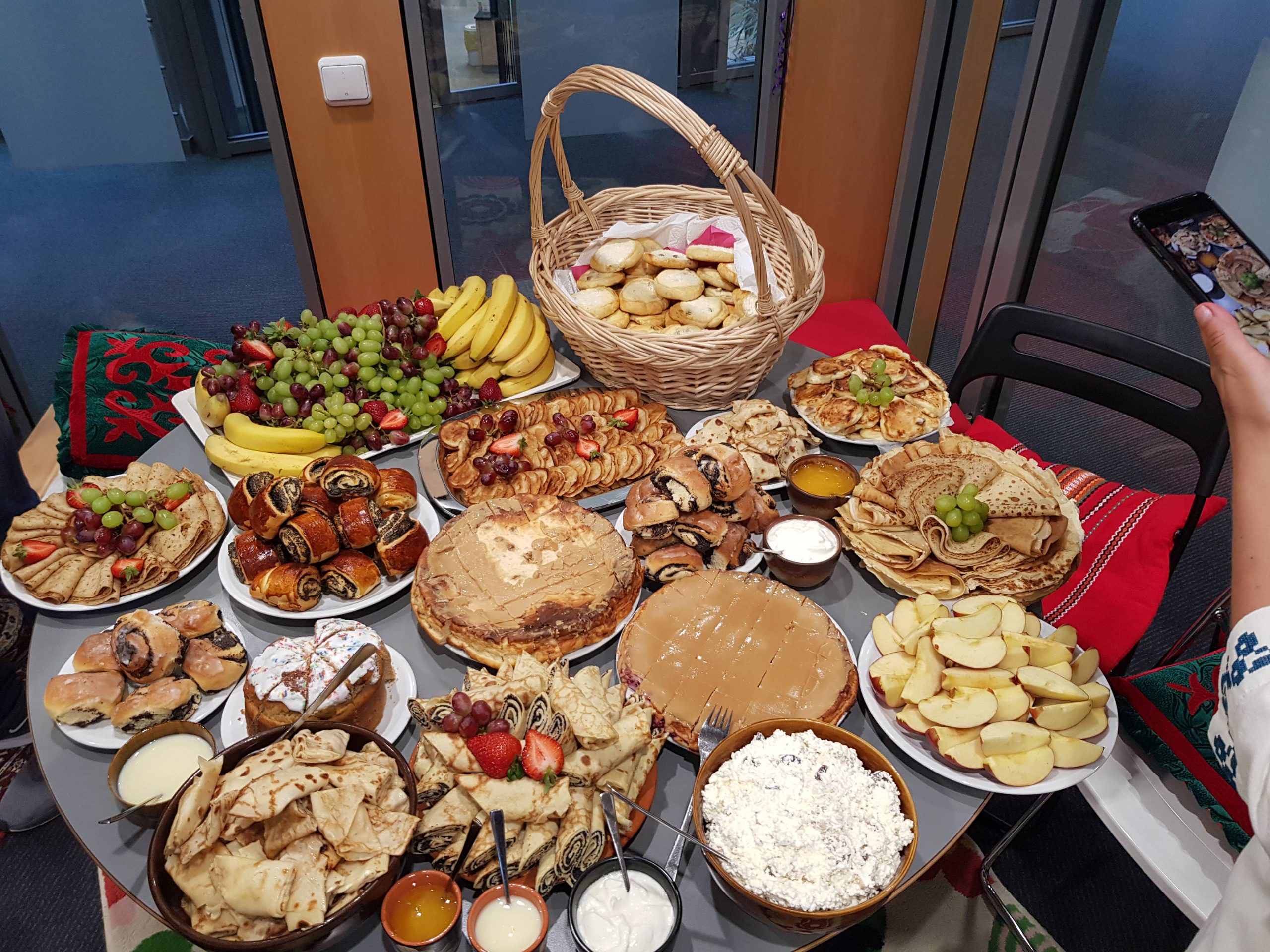 Due to the COVID-19 pandemic and restrictions on in-person events, Cultures@SAP events have been offered in the virtual format in 2020, 2021, and half of 2022. However, this “limitation” actually created the opportunity to connect these interesting events with the entire SAP workforce around the globe. Opening up the Multicultural Evening Celebration events in 2020 and 2021 with global broadcast allowed colleagues from more than 250 locations able to participate from home with their families and friends.

According to Mahin (Dr. Masoumeh Moghaddam, Iran), Cultures@SAP Core Team lead, all of the activities and events of Cultures@SAP are based on a simple but meaningful principle: Helping colleagues from different cultures feel included and welcomed at SAP. In 2017, Mahin received a Diversity Award from SAP for her activities in the Cultures@SAP network, a great recognition of the work of the entire Core Team and network of community leads.

The active Core Team members Kwame Ahiabor (Ghana), Sabrina Childress (USA), Hans-Peter Krappel (Germany), Abigail Haley (Great Britain), Ruchi Manchanda (India), Amy (USA), and Mahin (Iran) remain passionate about the purpose of the network. They continue to plan innovative events with the community coordinators that continue to be offered in online/hybrid format in 2022. Examples from the past two years are the popular English Pub Quiz Nights, a unique “African Unity Day with Japanradio.de” mashup event, the “Chinese Dragon Boat Festival” with the active participation of colleagues from China, and “Welcome Spring, Nouruz Celebration” – all which were successful, pleasing to regulars and newcomers.

Cultures@SAP is often asked to participate in various SAP campaigns and corporate activities. The network members can be seen in the #WeRunEqual video for Germany’s “Campaign Against Racism.” At SAP d-kom, the Cultures@SAP contribution received the first prize in the “SAP’s Got Talent” Competition.

Beyond the SAP Horizon

In addition, the work of Cultures@SAP has become a model for a welcoming culture in the entire Metropole Rhine-Neckar region in southern Germany. The Rhein-Neckar Welcome Club (RNWC) is a cross-company initiative that pursues similar cultural goals for cultural integration focused on companies that have a number of employees from other countries and cultures. Cultures@SAP is an active founding member of the club. Cultures@SAP is also featured in the bilingual Newcomers Guide for the Rhine-Neckar Metropolitan Region.

Grateful for the Support and Sponsoring

Luka Mucic, CFO, has been the sponsor of Cultures@SAP since 2014. Through this ongoing support, the employee network can efficiently and motivated realize its own ideas.

The work of the network enjoys great recognition at SAP, both from the workforce and the Board of Management. The support and sponsorship of Dr. Natalie Lotzmann, Jörg Staff, Claus Heinrich, Erwin Gunst, Dr. Jan Grasshoff, Peter Rasper, Dr. Werner Brandt, Wolfgang Fassnacht, and Peter David have ensured continuity in the pursuit of the network’s self-imposed goals.

The events themselves could not take place without the tremendous support of various SAP internal teams such as Catering Services – Germany (Eurest/Aramark), Global Real Estate and Facilities Services, SAP Family&Career, SAP IT, and SAP Global Security. 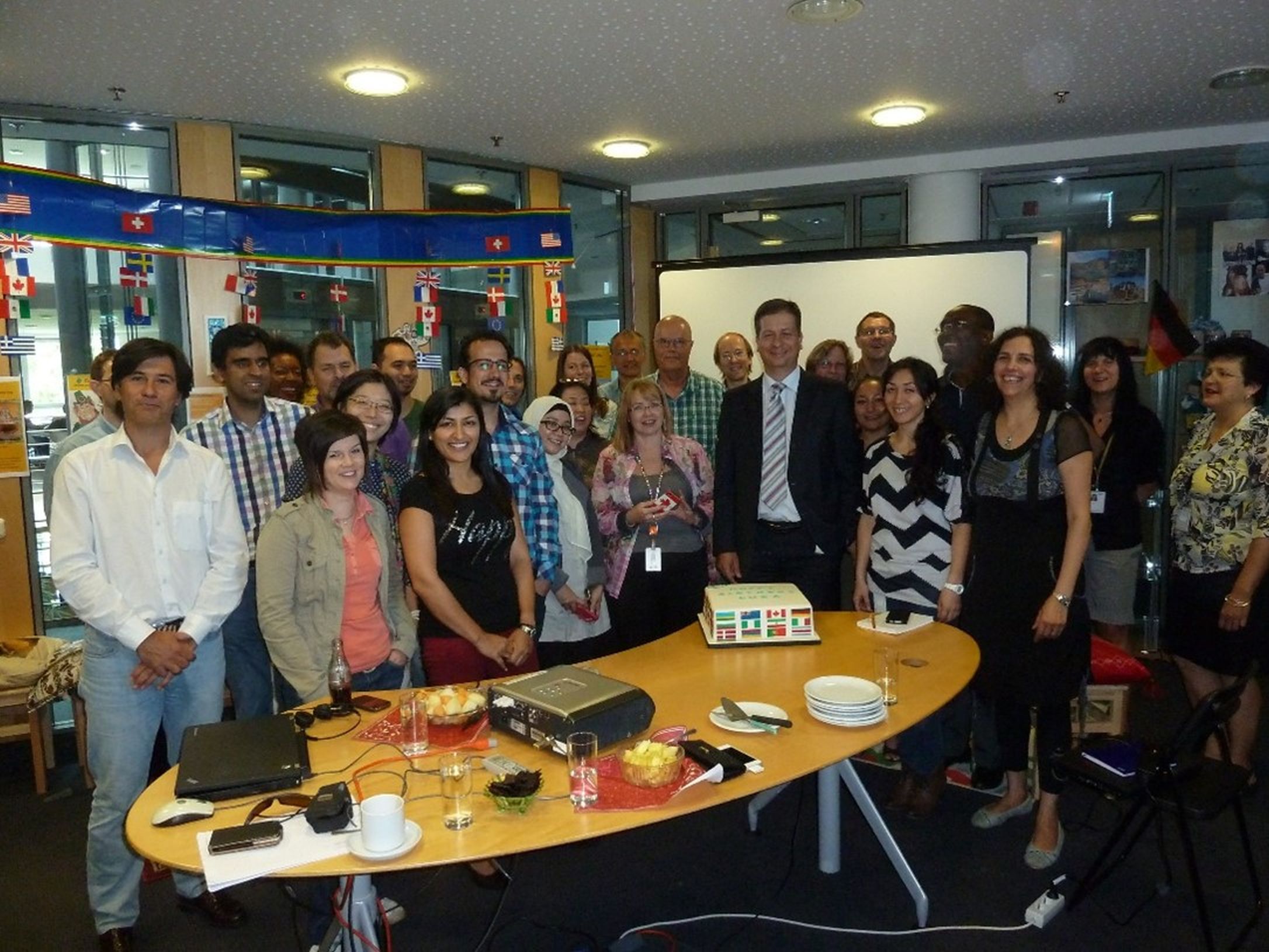 And the greatest asset of Cultures@SAP remains the committed community coordinators and their families and friends, who have been passionately and enthusiastically involved for many years. The 40 communities that comprise Cultures@SAP have become a central point of contact for anyone in the SAP world who wants to embark on or share a journey to understanding by appreciating foreign lands and diverse cultures – both in a professional and private way. In addition to these activities, Cultures@SAP is also about spending time together, getting to know our differences, discovering common ground – and having fun. 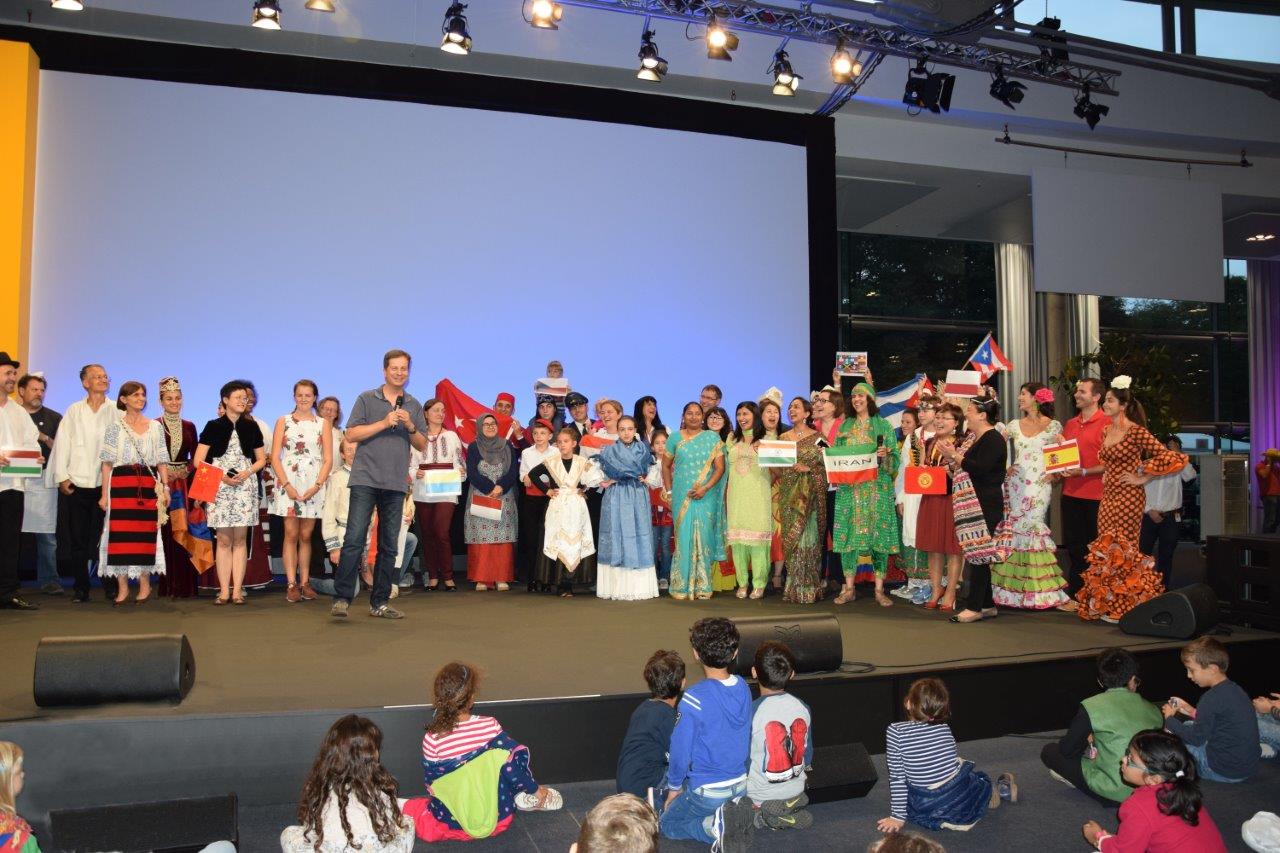 The current list of community coordinators and cultural activities is available on the Cultures@SAP page in SAP Jam, open for SAP employees. The Core Team can be reached through a dedicated Cultures@SAP mailbox.

At SAP, our commitment to Diversity and Inclusion (D&I) is critical to our success, more information regarding D&I at SAP can be found here.