My SAP Analytics Cloud User and Team Provisioning SCIM API Sample Scripts recently received an update to version 0.7. This blog post is for those that already use the samples and would like to understand what’s new and a few tips on how to update to this version from earlier version.

If you’re new to the samples, then there’s no need to read this as the main introductory blog post and the user guide have already been updated. The ‘Sample Scripts Presentation’ will be updated soon. It means everything is in one place for you, rather than having to read lots of different blog posts. Nevertheless, you might find it interesting.

You no longer need to edit code so new users have the correct user settings for things like date, time, and number formats. This version now stores these default setting in the Postman Environment. You can either update these setting manually or run a new sample script “021-U-Ue-Fcj-Update New User Default settings” to read an existing user and use that user’s settings as the default for all new users. 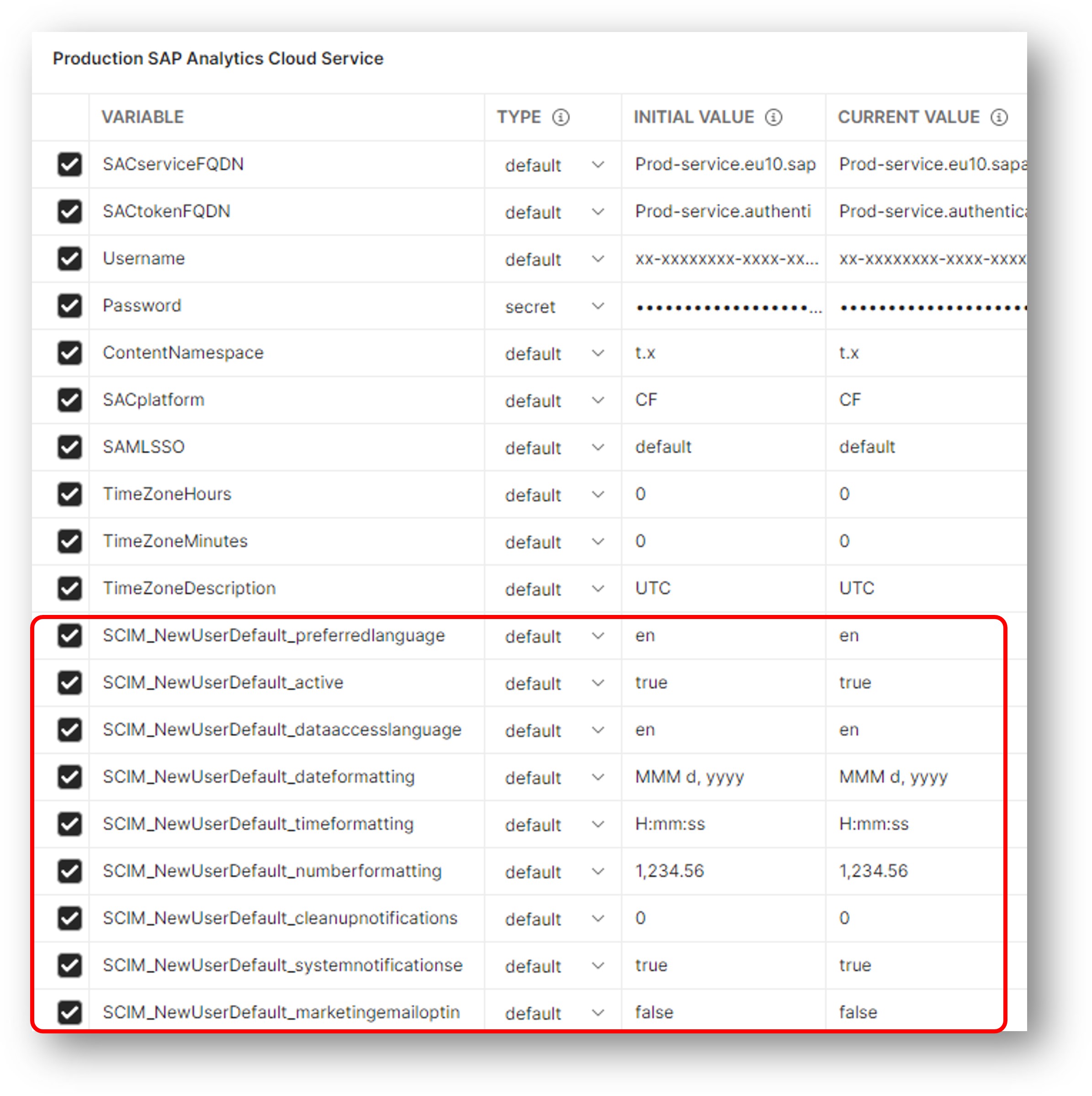 If you do have different groups of users needing different default settings, then you can either

My earlier 0.6 version introduced support so the scripts where SAMLSSO aware. This latest version extends this support specifically for the ‘custom’ option.

Now, when SAMLSSO is ‘custom’ a new field is required in the data file called ‘file_samlmapping’. This field needs to contain the value for your custom property you’re using for the subject nameid in your SAML response. (The thing you’re using to map users from your Identity Provider to SAP Analytics Cloud). For example:

Some organisations use the ‘custom’ option to map to an email address because the ‘email’ option doesn’t work for them. (The ‘email’ option requires the cAsE to be the same and has limitation on the types of characters). You can create a new user like this without any code edits and all within a single script:

Before you may have run two scripts, one to create the user and one to update the user with the custom saml property. You no longer need to do this; you can now do it all in one script and without the need to edit code.

It can be confusing to understand which sample script to use depending upon which SAMLSSO setup you have, since my samples are very all encompassing. To make it easier I’ve made things clearer in the user guide and it includes this guidance:

If you are in any doubt, then sample scripts 231, 232, 233 are always safe, just not necessarily the most efficient.

Extending the support for ‘custom’ SAMLSSO, I’ve created a number of scripts that identify users by their email address or by their SAML mapping. These will be useful for those that don’t necessarily know the userid for the user.

You could already delete users ‘by userid’ with ‘301’.

For updating the saml mapping:

You could already update ‘by userid’ with ‘408’

Updating users’ email when SAMLSSO is userid or custom

To continue the SAMLSSO support I’ve improved the checks made to update a user. When SAMLSSO is set to ‘userid’ or ‘custom’, then the email address cannot be updated. All the samples are now aware of this and means a user update may not be necessary in such cases. In turn, it could improve the throughput of updating users in such cases.

How to update to version 0.7

Regardless of the existing version of these samples you are using the update process is the same.

Run the new sample script 001 (and 011 if applicable). This will add new environment variables:

You may have already done this step if you already updated to version 0.6.

The new version of script ‘001’ will also add 9 new variables to your Postman Environment as the default settings when new users are created. The variables are:

The values will be the default values used by SAP Analytics Cloud.

Then, you can either manually update these variables, or better still just run sample “021-U-Ue-Fcj-Update New User Default settings” to read an existing user and use that user’s settings as the default for all new users. Remember to set the new userid in the sample data file to be the user you’d like the settings to be copied from.

If you have SAMLSSO set to ‘custom’ then you’ll need to add the field file_samlmapping to your data files. My sample data files provide a handy template for you to copy.

As you would expect, the user guide, has been appropriately updated.

I don’t currently plan any further improvements in the short-term to these samples, but please do expect an update once the SCIM version 2 of the API is available.