We now have an offering that targets all those developers out there that have an elementary knowledge of modern programming languages such as Java, C#, or Python and that would be interested to learn what ABAP is about, but that have so far refrained from doing so.

Get Started with ABAP Programming on SAP BTP

Though the name of the learning journey states that it is about getting started with ABAP Programming on SAP BTP the content of this learning journey can also be used and run trough in on premise systems as of SAP S/4HANA 2020.

Examples could be students that would like get a glimpse what ABAP is about or employees of companies that are using SAP but have not had the chance to get some ABAP knowledge.

Our brandnew SAP Learning Journey Get Started with ABAP Programming on SAP BTP offers 40 hours of free learning and lets you discover how to apply some of the fundamental programming techniques on SAP BTP, ABAP environment, and will be able to develop a simple, end-to-end RESTful ABAP app. 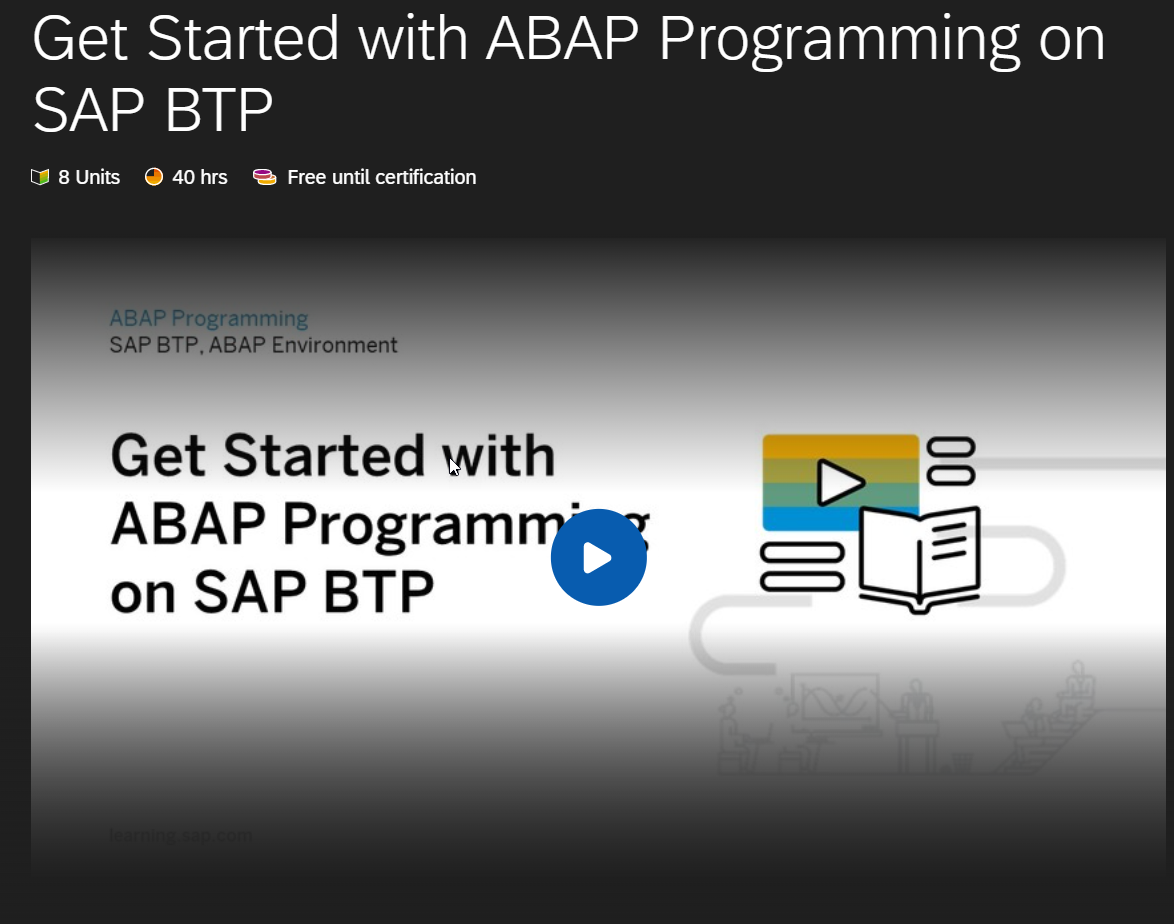 My colleagues from SAP training department have managed to create an introduction into (clean) ABAP that lets new developers concentrate on modern ABAP language without forcing them to learn language constructs that are not recommended to be used anymore in modern ABAP.

In addition they let them use the ABAP Development Tools in Eclipse rather than having to start with the SAPGUI based tooling which happens to be not that appealing to developers that are used to modern IDE’s 😉.

But this course will also be of interest for those experienced ABAP developers that did not have a chance to work with modern ABAP language constructs so far that are available in SAP S/4HANA and SAP BTP ABAP Environment.

This would be so helpful for an ABAPer like me who is trying to upskill and stay relevant 😅. Is there a certification related to this learning journey ?

Not yet. But it is planned to have one.

It's a very nice initiative. Nicely organized page for self learning.

It's also a pleasant surprise to see Jon's welcoming video with his nice accent (just had an official training with him about CDS Views last week).

Sound interesting, thanks for sharing! Andre Fischer !
Can you maybe explain (or show me, where this is already explained) how learning.sap.com compares to open.sap.com ?! Will one replace the other in the long run, maybe ?

Although it has not yet been decided how exactly this will look like, https://learning.sap.com should definitely be remembered as a URL for learning content ;-).

Not to forget SAP Learninghub.
3 options, two supported by an app.

Whoever worked on this tutorial guys thank you.... I am just loving it and can't close the browser. I wish more SAP tutorials are made like this. I find these even better than the open SAP ones.

Great work and thank you whoever worked on this.

Andre Fischer Just one point the SAP RAP PDF available on the internet does not captures some new topics like say the pre-check etc. Am I looking at wrong PDF or it is really not there any plans to update that PDF it comes very handy as a reference while working. Thanks,

i have created an Enterprise BTP account and have subscribed to the 'free' plan for the ABAP environment in my sub-account. When I try to connect with the ABAP service instance from ADT Eclipse (either via Service Key or via Cloud Foundry credentials), and click on the 'Open Logon Page in Browser', I get the message that the logon was successful but I cannot login due to missing authorizations. After reading the help documentation, I realized that this is because the SAP_BR_DEVELOPER role needs to be assigned to my user and for that I need to subscribe to the "Web Access for ABAP" service, so that from my BTP sub-account, I can login to the Fiori launchpad for ABAP environment and add this role via the 'Maintain Business Roles' Fiori tile.

However, I see that there is no "free plan" for the "Web Access for ABAP" service.

Web Access is only a technical component of Steampunk and is not settled (charged) itself, that is, no costs are incurred.

It would be great if this was made clear in the description of the service plan when adding in entitlements.