In this blog will provide you on in detailed information like , where do you check and what are transation codes which we have to on system performance issues.

SAP ABAP System performance issues identified and will categorized into below three aspects.

We have to check the below points to analaysis the System wide performance issues.

The following are important analysis views in transaction ST03:

If more than the values, we have to check the below areas to identify the issues.

Using the Global Work Process Overview screen, you can see at a glance:

Work process are long running , we must check the below areas .

any updates are failed

If the program buffer, CUA buffer, or screen buffer is too small, there will be an increase in average load time. In SAP memory configuration monitor (ST02/ST02N), if there are swaps in program buffer, CUA buffer, and screen buffer as shown in the following figure, it indicates that the buffer needs to be enlarged. The goal for a smooth-running system is to have no swaps in all Buffers except for the Program Buffer. The Program Buffer, in general, should not have more than 10,000 Swaps per day. It helps to keep in mind when the system was last restarted.

A method to resolve Swaps is to ensure that there is enough space is each Corresponding Buffer. Increase the size of the Buffers in 20% increments until the Swaps have stabilized. Please schedule a restart of the system to see effects.

In the below screenshots to see more than 10,000 swaps.

Roll in or Roll out time.

It is important to have enough extended memory, if there isn’t, SAP Work Processes would get memory from Heap Area based on SAP allocation sequence for dialog tasks. Once a Dialog is using Heap Memory, the SAP Dialog Process goes into Private Mode (PRIV mode), which means it that is reserved memory and cannot be shared.

If extended memory or roll buffer is full, the roll-in or roll-out times may increase. The maximum used should be lower than 80% of the configured memory for extended memory.

In the work load monitoring we can analysis which transation code taking high response time , based on the values we can check the perticulr transtaion code details. 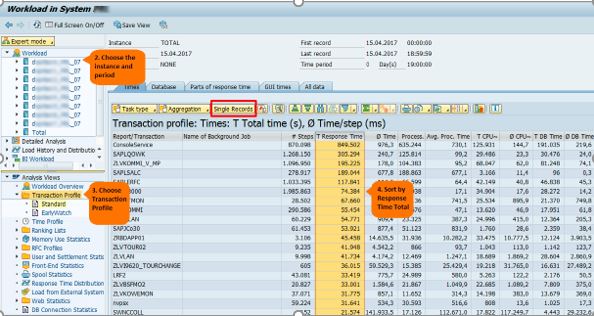 If we could see any transation consume  high avarage response time , we have to go STAD records and analssis the issue.

In the STAD records if we could see more values based on user and response time, we have to investiage what could be the issue on perticular transation code or does any sql staement causing the issue , any process consuming more CPU time.

SAP Background job performance issue. If any case multipile jobs are long running in peak hours, that could be cuasing potential bottleneck of the SAP system.

In that case what are jobs are long running and we can identifify the jobs and inform to the Funcational/Technical team to investiaget the programme/Varient issues.

And also check the sufficient background jobs avaliable in the system or not ? if not we can increase the BTC workprocess as per business need and based on hardware configuraiton in the system.

I hope this blog will help you to investiage basic SAP ABAP system performance analysis.

Very useful and thanks for sharing the content  with the detailed explanation.

thank you for sharing.