The active budget check during purchase order creation or supplier invoice creation is conducted using the ‘released budget YTP – (actuals + encumbrances)’ as a reference. To release portions of your planned budget in consecutive steps gives customers significantly more control on the spending behavior in the overhead cost area.

Example: The yearly financial plan including the overhead budget has been signed off. To avoid critical budgets being spent in the first quarters spending behavior can be controlled by releasing every quarter the necessary budget for the next quarter. The picture illustrates the case in which the customer releases the budget for the upcoming quarter shortly before the start of the quarter. 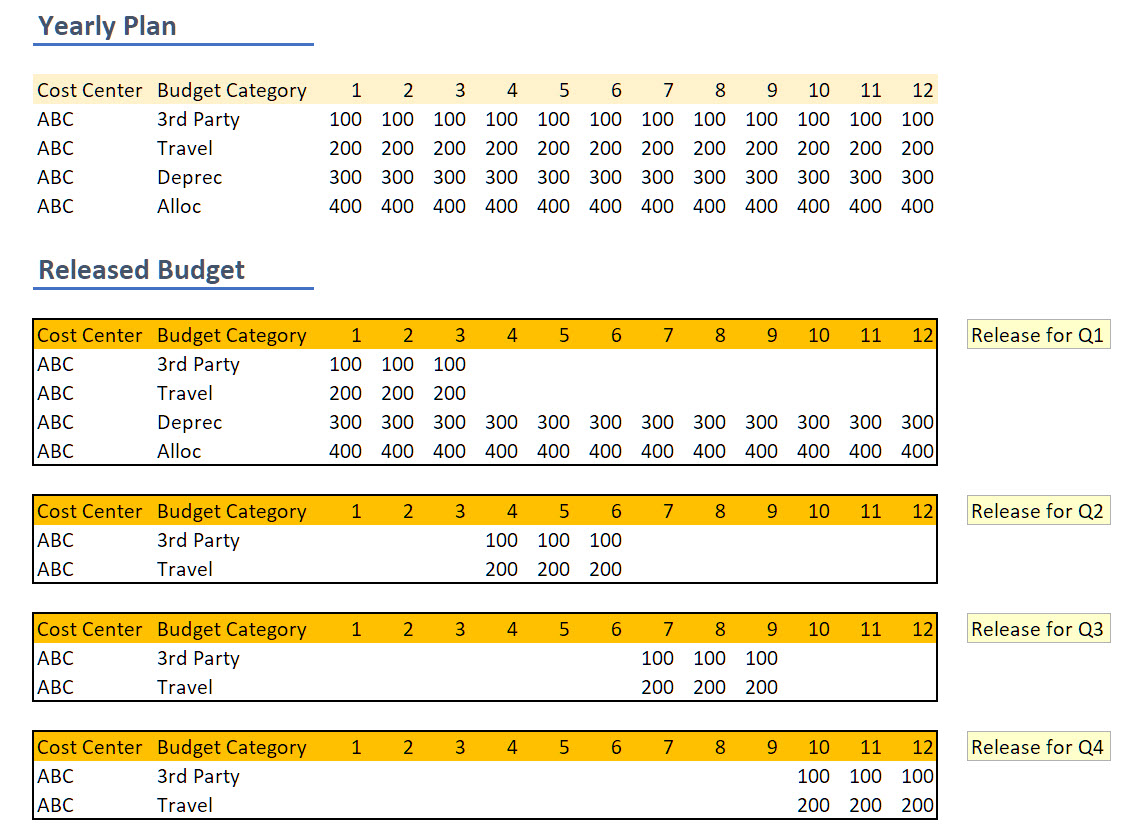 Please note that in this example depreciation and internal allocations were immediately released for the entire year. Whereas the budget categories Travel and 3rd Party are to be released in quarterly steps. Please also keep in mind that with multiple uploads the additive delta mechanism is in place. The already released budget adds up with the entries in the just uploaded budget. In this example Q1 release + Q2 released budget = available budget in Q2.

In case budget check capability is switched on, an additional work center view in the areas of cost & revenue becomes available and can be assigned to the financial accountants authorized to release budget.

To do so please use the application and user management and assign the work center view indicated below: 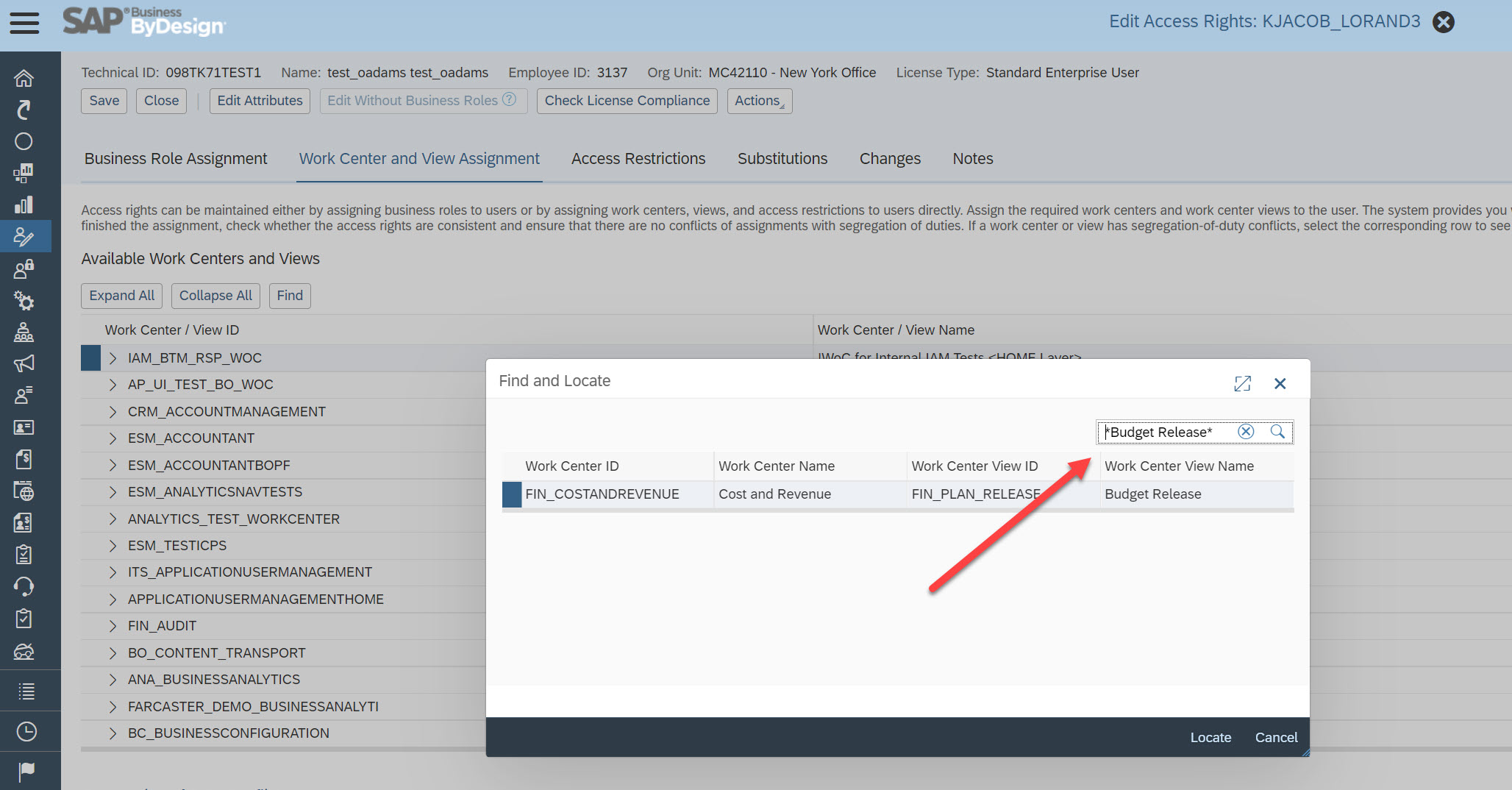 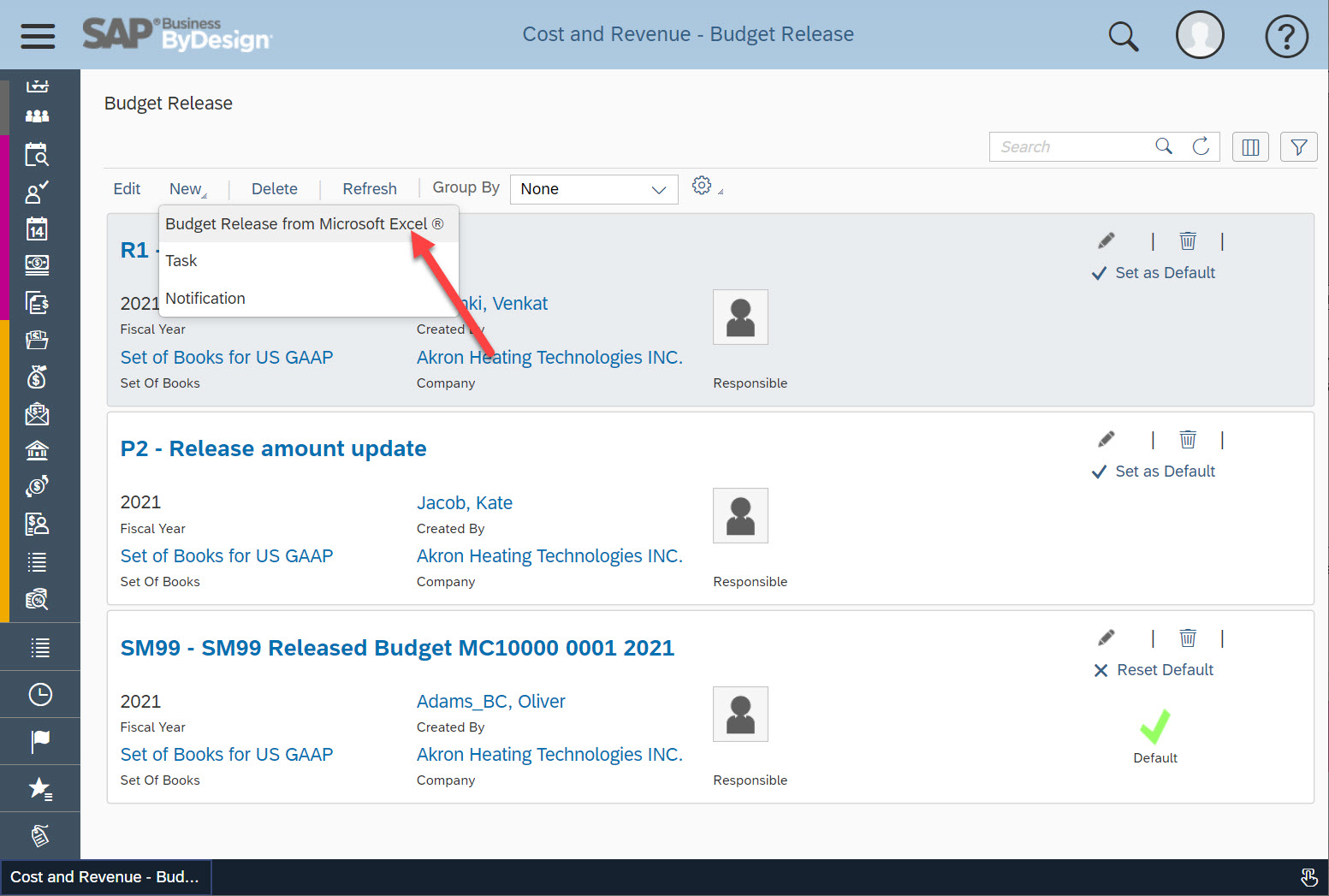 Multiple versions of released budget can be created for a company, set of books and fiscal year. I personally strongly recommend the following:

If you are familiar with plan versions, you see the individual elements again. Here you can also write notes and attach files you used to document the budget release data uploads for example. For example if you upload prior to begin of the quarter the released budget you could attach every released budget upload here to properly document the applied adjustments. 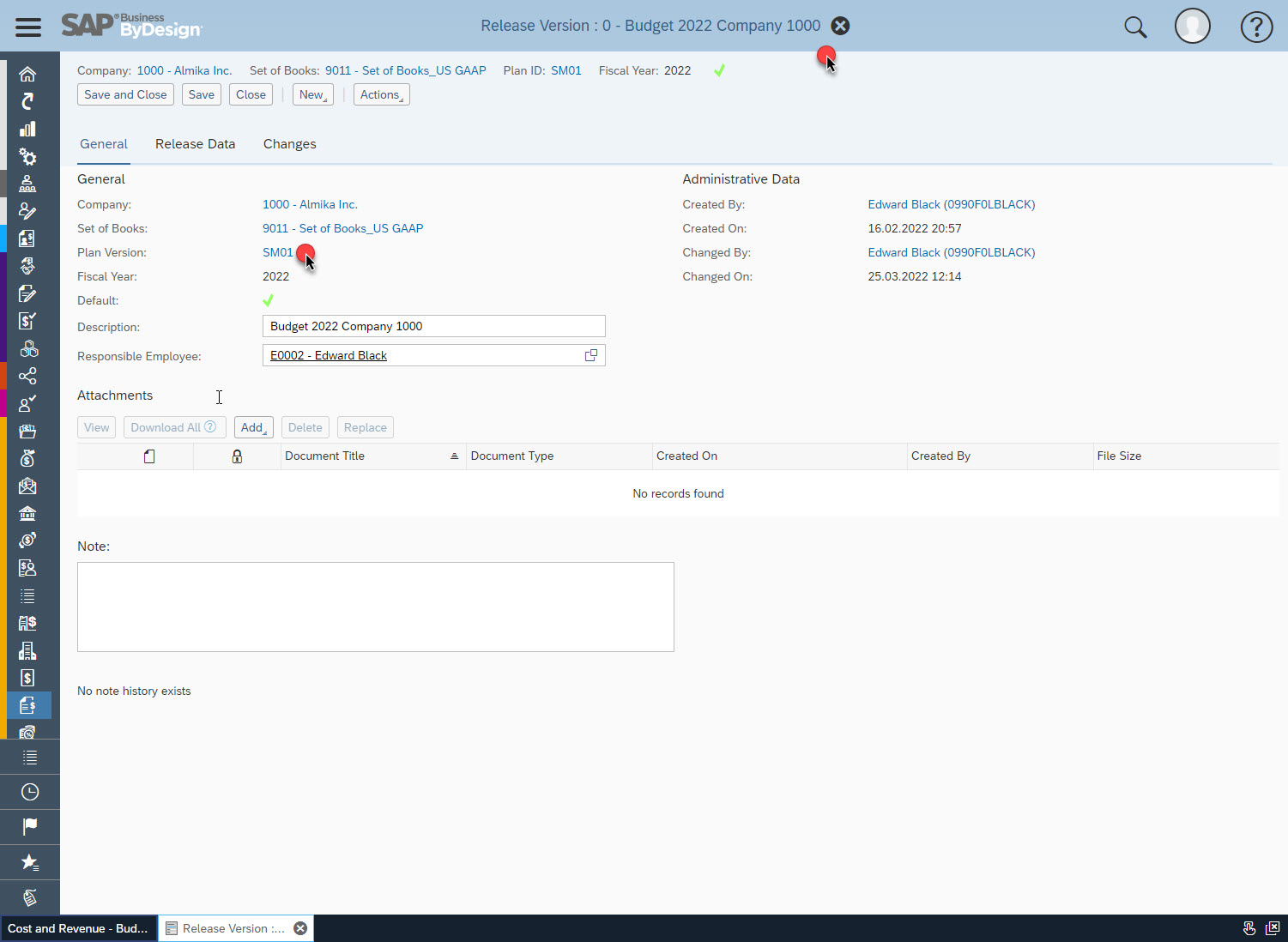 Let’s focus on a simple example in a single company, one set of books and a given fiscal year.
During creation of a new budget released version it will be automatically related to the plan version  currently defaulted valid at that point in time of creation.

Creation of a budget release version and uploading released budget

But why is this of any relevance?

The system checks some constraints during the upload of data

If one of these criteria is not fulfilled a save of the data to SAP Business ByDesign is not possible and error messages indicate the constraint violation.

The budget release amounts are by default not allowed to exceed the related year total values in the plan version. There is an option in the budget version though to control this. 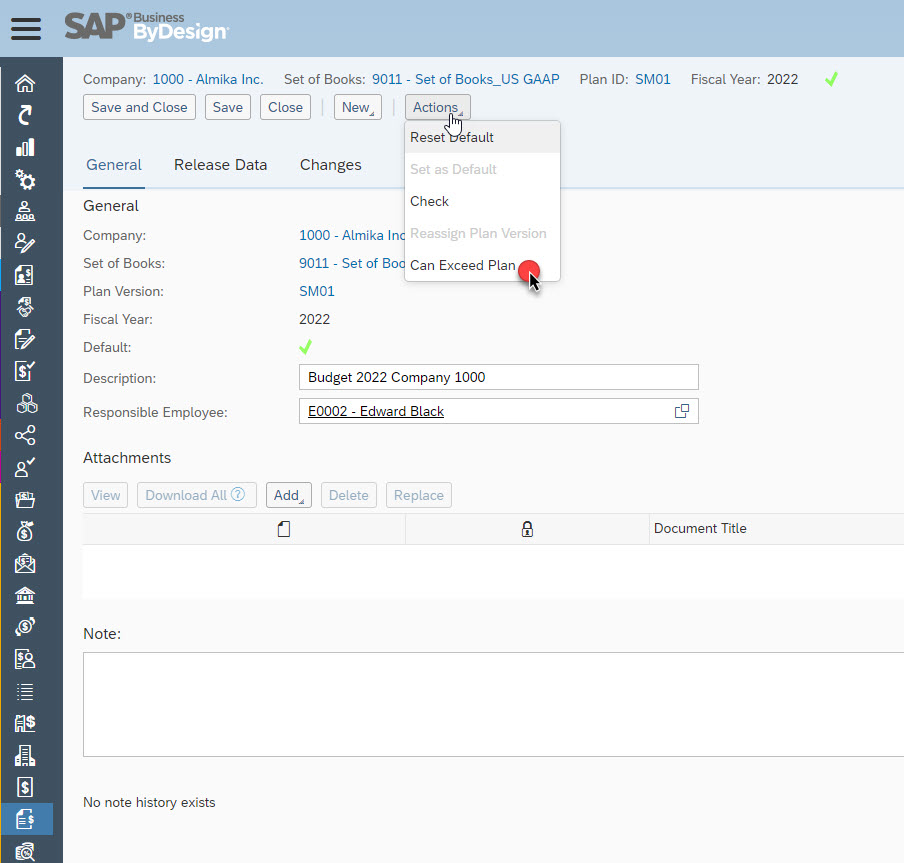 For many customers the agreed financial (yearly) plan shall not be changed due to required adjustments for spending in some selected business areas and/or budget categories. In order to assure that still required services or products can be procured an increase of budget released is possible without having to increase the plan – if this option is switched on.
In public sector usually the policy plan >= released budget has to be enforced. For other industries the capability to exceed the planned budget by increasing the released budget might be the preferred method. In the reports ‘Cost Centers – Budget Monitoring’ and ‘Projects – Budget Monitoring’ these differences can be tracked.

What does this property of the budget release version influence? There is in principle one simple rule and constraint that will be checked during the upload of the released budget amounts:

I would like to use a simple example again to illustrate what it means.

Multiple aspects can be seen in this simplified example:

Special topic: Having to adjust the released budget

Follow me on a small business story that might sound familiar to you. It is a common practice that cost center responsible might want to switch the available overall budget in one budget category to another without exceeding the overall budget of the cost center. Customers for example could establish a request workflow and if it is approved the accountant could adjust by simply uploading the deltas.

How would such an adjustment look like to an existing plan version and budget release version? I would like to use the the example illustrated before. The budget could not be released for cost center ABC because the budget category Travel exceeded the planned budget. The manager got the approval to shift 100,00 USD from 3rd Party to Travel.  The simplified illustration shows the steps an authorized accountant must make in this use case (assuming released budget is NOT to exceed planned amounts)  :

Step 3: Release of budget. Now the accountant can release the budget with reduced budget for 3rd party and increased budget for travel.

Please note: the system does not explicitly enforce any balancing checks on the plan or released budget changes. These constraints are not adequate to quickly adjust the planning or budget release of business environments changes quickly. Since the ability to change financial plans or released budgets is task of a financial accountant the customer can put other controls in place if required. In rare occasion it might be required to assign a budget release version to another plan version. Since this usually has significant implications (especially in public sector for the auditing control) the process is by purpose split into multiple steps to avoid an accidental or unwanted reassignment.

Here are the steps to conduct the change of the reassignment to another plan version. This is possible on the UI of the plan version as a dedicated action.

As a result, we now have a defaulted plan and a defaulted release version that are used in analytics and for budget check

In this blog post the relation between plan versions and released versions are explained as well as the process to release budget and fill the amounts. The similarities using the excel plugin to upload and adjust data for plan versions and released budget versions should have become clear.  The essential constraint that cumulated planned amount larger than cumulated released amount is a key constraint that needs to be considered. In addition to allow the released budget to exceed the planned amount might be an option that supports your type of business better or internal policy.
Finally it is pretty powerful to release budget in steps after reassessing the financial and spending situation on a regular basis.

Feel free to share how you would use these capabilities to your customers benefit?