Surely, some adjustments might be need as different APIs or APIs providers may have different authentication requirements and/or procedure.

As a reference, REST API as used in this example is further explained on the link below:

What Is a REST API? Examples, Uses, and Challenges | Postman Blog

Further information is vastly available on the internet.

The API supplier in this case uses a REST API based on OAUTH2 protocol for authorization. This authorization is done using two html POST requests to the API.

The first post should send the Client_ID and client_secret (Provided to the client user by the supplier) for authentication on the API and a reply should be received with a Bearer token that can be used for requesting data from the API.

The second post is for requesting the data from the API and to do so, the token replied to the first post must be inserted in this second request to authenticate. The API should reply to this second post with a JSON with the required data that will further be placed on SAP Data Warehouse Cloud.

In order to achieve the tasks to communicate with the API, an user should be added as member (or even as administrator) of this new space. That can be done in the members / Members assignment section by clicking on “Add” and setting the needed users.

This user can be name accordingly and must be configured as Enabled to Read Access (SQL) and as Enabled Write Access (SQL, DDL, &DML). Reading and write access are needed as this is the user that SAP BTP will use to access data on SAP Data Warehouse Cloud . The picture below shows how it should look with the name USERNAME on a COLOMBOTEST Space. 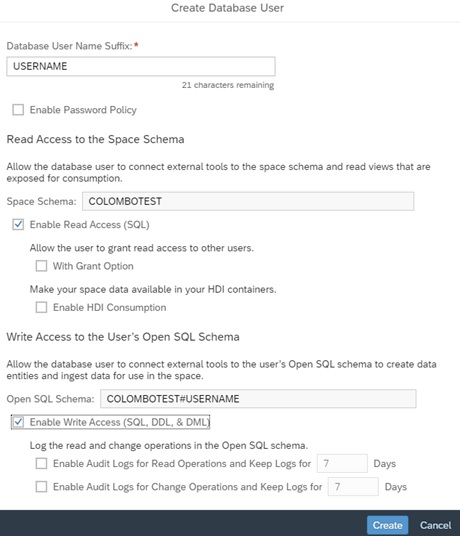 After that, the space should be deployed, and the database user details (“HOSTNAME”, “DATABASE_USERNAME”, “PASSWORD” and “OPEN SQL SCHEMA” latter called as “INTERNAL SCHEMA NAME”) copied as it will be needed in the SAP BTP Service configuration. This can be done by clicking on the “i” icon shown below:

After that, the tables can be created by accessing the Database explorer:

Hana Database Explorer should open in a new tab and the created database can be added by clicking on + symbol on left upper corner. The database type should be kept as SAP Hana Database and the Host, Port, User and Password filled as it was on the SAP Data Warehouse Cloud. The Display Name can be shortened for convenience.

The SQL console (icon on the top left corner) is used to manage the tables. We are using tables for two different purposes:

In both cases, the tables were designed according to the purpose and needs for each specific solution.

For this purpose and API supplier, it was convenient to create a single configuration table to manage all the reports the API could provide. In this table were stored report numbers, column names in SAP Data Warehouse Cloud , column names in the API file and the data type. For each report a data table was created to store the data. The column names and data types must match the information brought by the API, otherwise the data could be misplaced, or errors could occur in the SQL sentences.

For security purpose, it is not recommended to expose credentials on the code. In order to enable SAP BTP to access both the SAP Data Warehouse Cloud and the API two services were configured to store those credentials on Cloud Foundry environment variables (i.e., VCAP Services). 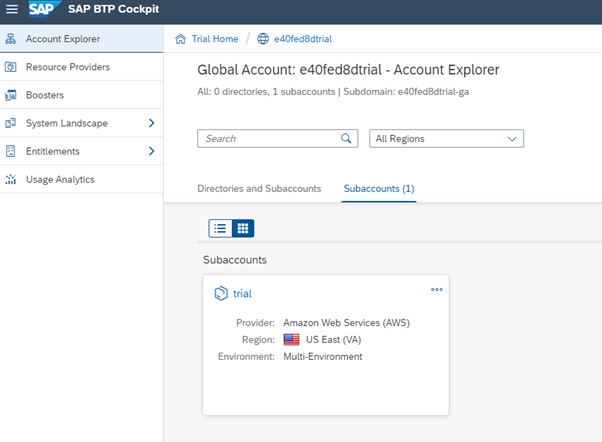 And on Cloud Foundry Environment click on 0 that appears under Service Instances:

Next, on the top right corner we click on the arrow next to “Create Instance” and on “User-Provided Service instance

Note that “HOSTNAME”, “DATABASE_USERNAME”, “PASSWORD” and “INTERNAL SCHEMA NAME” should be replaced with the correct values that were configured on the SAP Data Warehouse Cloud.

In our case, some adjustments were needed. First, the url was changed to the right API endpoint. Then, instead of using an API Key, the API supplier used a user_id and a user_secret to authenticate. This could be done in several ways, but we chose to create a second item inside “keys” and rename both. As a result, we came to the JSON above:

For basics functionalities, those two services are enough and will enable SAP BTP to access the Data Warehouse Cloud and provide to the micro-service the needed information to connect to the API.

The mini service provided by Christoph blog through GitHub can be divide in 5 main tasks:

As mentioned, in order to access our supplier API, a different approach is needed:

As last seen, some adjustments were needed in order to perform the connection between our supplier API and the SAP Data Warehouse Cloud.

Please note that the first step of this code is calling the get token function we reviewed in the previous topic.

This code will return an array of objects with a single key named Column_Name. This format is not very friendly, so it was worked out to be a simpler array of strings of the column names. This was done by the code below:

To solve the inside quotes problem, it is been replaced by two single quotes as an escape character.

To solve the undefined data in the API, it is replaced by a NULL value and for normal data it is just inserting quotes before and after the value to compose the SQL statement.

Remark that for this to work the SAP Data Warehouse Cloud tables should have a standardized name, in this case “WS_REPORT_” followed by the report number. This is also valid for the column headers reading and is key to have the connection working for more than one report.

The main functionality is described above, and it enables basic connection. Yet, some more specific treatment was needed for the project with some more little sets of codes. Below follow a list of the most significant ones:

As described, this mini service solution has some versatility but also have its limitations. Some of them are noted below:

This entire procedure can be improved by reducing or eliminating its limitations mentioned above or adding new features to the solution as required for each case.

Some of these limitations are related to the environment it runs, but some “workaround” might be useful.

In this tutorial we have implemented an example of extracting data from a third-party API into Data Warehouse Cloud using a micro-service on SAP Business Technology Platform. This enables Analytics to be extended to external data in synergy with other internal data. Unfortunately, the data flow is not the fastest one but if this functionality is integrated to SAP Data Warehouse Cloud, it would probably be enhanced in that matter too.

As mentioned, this blog post was based on Christoph Christophersen’s one and surely could not be done without this input. Yet, besides Christoph, I would like to thanks:

Thank you for the post, exactly what I was looking for. Could you please share more about how and where you parse the JSON?

The structure of data we got from the API was more complex than expected with arrays and objects inside each other. Ensure the functionality, the JSON replied from the API was flattened and the column names adjusted to match these conditions.

We are exploring an option to consume SAC Restful API in DWC
SAC Docu.: help.sap.com/docs/SAP_ANALYTICS_CLOUD/1...&q=rest%20api (GET request with additional headers and OAuth 2.0, the JSON is a nested structure so it would need to be parsed in DWC ?Data Flow / understood by DWC)

Happy to hear it helped.

The JSON we received from the API contained objects and arrays, so first I had a routine to flatten this JSON so every value could be reached directly in the JSON. Then every value could be placed on the correct column by checking the column name and placing the value properly.

All of that is done in JS before loading this data in DWC.

For sure this approach is not unique and it fit our case, but depending on how your data is provided by the API and how your DWC tables are constructed, some adjustments may be need.