SAP Customer Checkout 2.0 FP13 was released recently with a bunch of new features for users and consultants. But also developers will see some changes within the ENV.jar to develop fantastic plugins for the product.

So what did change exactly?

The fat jar is dead

Prior to FP13 the ENV.jar was distributed as a “fat” JAR file, meaning all dependencies SAP Customer Checkout was using, were included in this JAR. This made development pretty easy as you could use these dependencies (e.g. Apaches Commons libraries) right away without worrying about the correct version to use.

You may have recognized the new folder “envLib” in your cco folder? 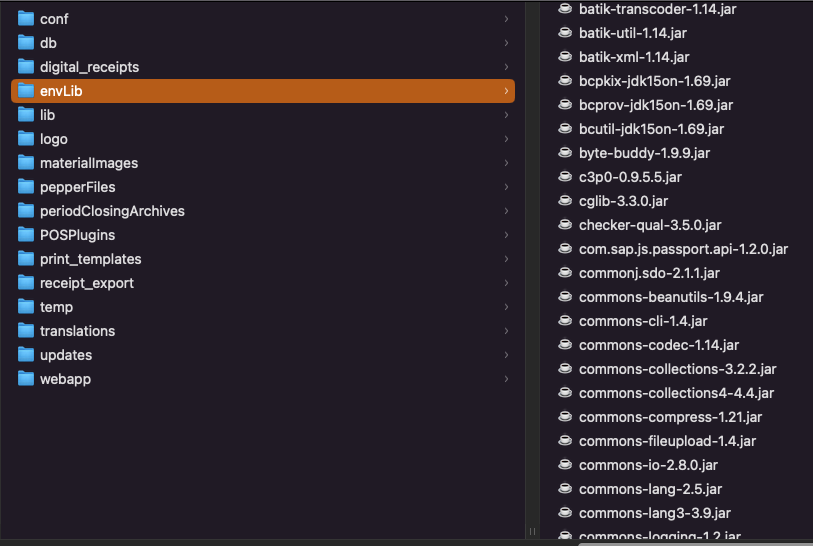 Furthermore the ENV.jar became much smaller than in previous releases!

Looking at these screenshots it may already dawn on you.

YES! The ENV.jar in FP13 does not have the dependencies included. This will lead, if not handled correctly by the developer to some confusions and strange behavior while runtime.

Imaging the situation, you want to use the Apache commons IO package in Version 2.8.1 because you encountered a bug in 2.8.0. You can include this dependency in your plugin via e.g. maven and on compile time everything looks fine.

You load up your CCO FP13 and realize your plugin is still affected by the bug in 2.8.0! Why?

Because CCO FP13 (see screenshot from the envLib folder) still uses 2.8.0 and because CCO will load before your plugin loads, your plugin will show unwanted behavior.

So how can we have the ENV.jar with all dependencies like we used to?

With the release of FP13 SAP will provide a pom.xml which only holds information about the dependencies. 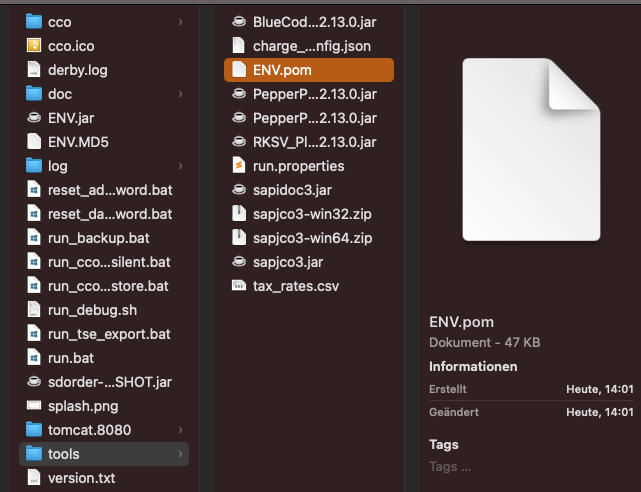 So how do we do that?

Open the command line tool of your choice. As I use macOs I will use iTerm2, on windows you can use CMD. To make this more convenient, I like to copy the jar and the pom files into one directory and navigate into this directory.

Now we install the artifact (the jar + pom) to our local maven repository. The command is fairly easy.

Install the ENV.jar into your local maven repository

That’s it! We can now go to our CCO plugin pom.xml and use the ENV.jar as dependency. 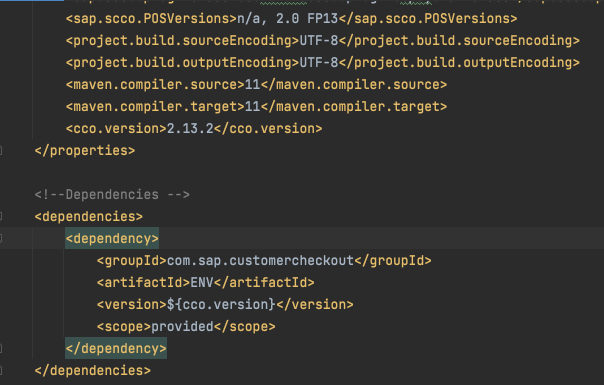 But wait, there are still some errors?

So maven tries to retrieve all dependencies mentioned in the ENV.pom from public maven repositories, but as I already mentioned, some packages CCO uses, are not publicly available.

Therefore we install them like we installed the ENV.jar with one difference:

We do not have a pom xml for them, so we need to explicitly set the groupId, artifactId and version of the package. All of the three missing packages should be available in the envLib folder.

We need to determine the groupId, artifactId and version of this packages. ArtifactId is fairly easy. It is e.g. Likey. Version is also easy e.g. 1.0.0. But what is the groupId?

Open the ENV.pom and search for e.g. Likey.

Now we have all necessary information available to install these missing packages into our local repository.

Now proceed with the two missing packages in the same way.

When we go back to our IDE and try to import the dependencies again, everything should run smoothly.

That is all. You are now able to develop like you used to prior FP13 and will have all packages available Customer Checkout is using.

If you have any further questions, please leave a comment. If you liked this short guide, feel free to like and share as it may help others.