We recently started a project to create a new UI5 gui for one of our main products. We tried to reuse as much of the existing ABAP code and use a typescript application to make it easier to consume from the UI. As a bonus we’ll get a comprehensive rest API with an openAPI definition.

All development is versioned in git with a nearly full CI/CD pipeline, and we have a pretty decent test coverage.

I say nearly full because ABAP changes are distributed to the relevant SAP instances with transports,  and this doesn’t trigger any pipeline.

We do merge them in the main repo with pull requests, like the rest of the code, and that does trigger a pipeline, but runs against the ABAP dev environment, not the main branch.

Also the CD part delivers to QA  and a demo environment, not production, so it’s not a real CD even if technically similar.

Until recently we had a big gap on integration tests. The application requires a relatively complex landscape, as one of its main jobs is to move transports: 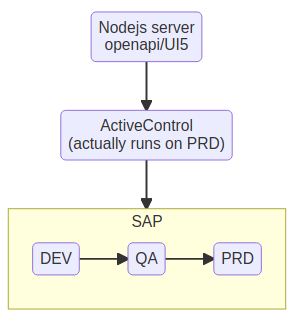 Ideally we want to:

To achieve this, we created a docker container for each of the SAP instances and one for the node server, and an orchestrator service to easily backup/restore/replicate them.

Each test engineer has a playground which is a copy of the main landscape, where they do most of their work.

These can be recreated restoring a backup of the template with a simple command line utility, in about 15 minutes.

They also create test data in the template, and whenever they see fit they take a new snapshot with the same utility. This takes about 50 minutes, during which the template is not available. 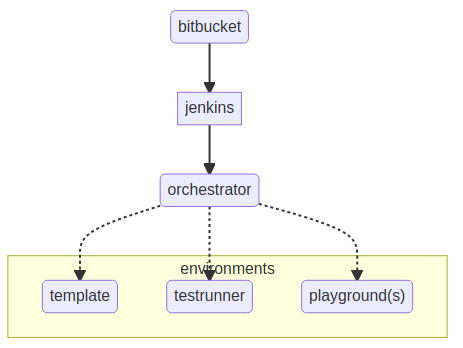 Whenever some code is merged on the main branch, bitbucket will trigger a jenkins build which will:

A note about ABAP

For updating the ABAP code we still rely on transports, imported in the template with manual supervision. Would be possible to do it directly in the test runner with abapGit, but is tricky to handle the customizing part and a bit less reliable. Would also be possible to automate transport imports: we can cross reference transports with commits via bitbucket, jira and activecontrol.

But we decided it wasn’t worth the hassle as new ABAP is probably 3 to 5% of the development effort for this project.

Good blog post: one hint, it is git not GIT. Many people think that git is an acrynom for something, like SAP. It is not ...

Thanks, I'm well aware of it but still mispelled 🙁

Mercurial is thus named in Larry's honor. I do not know if the same is true of Git.