Within the time frame of 2022 QRC1, several new calculation view features have been released in SAP HANA Cloud that can be used with SAP Business Application Studio beginning of April 2022. Some of these features are highlighted below.

In the past, data preview queries were executed automatically, when starting a data preview. In case of expensive queries this can be unwanted given that typically only a reduced query is of interest.

With the new option it is possible to only execute the data preview query on request. Therefore, the query can be adapted, e.g., filters added, columns removed, before executing the query.

To switch between the different behaviors go to the Preferences and search for the term “manual refresh”. Choose to either automatically execute the query or to only execute the data preview query on explicit request (e.g., after the query has been modified): New option can be found in Preferences

Choose between manual or automatic refresh

It is now possible to show hierarchies during data preview. This can be used to validate the hierarchy.

The data preview option is only available for SQL hierarchies. These type of hierarchies are generated when choosing either the Hierarchy Type “Auto” or “SQL hierarchy views” in the View Properties 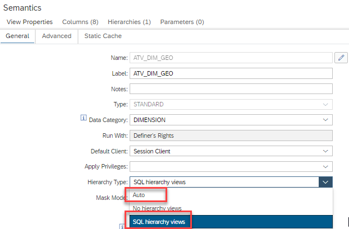 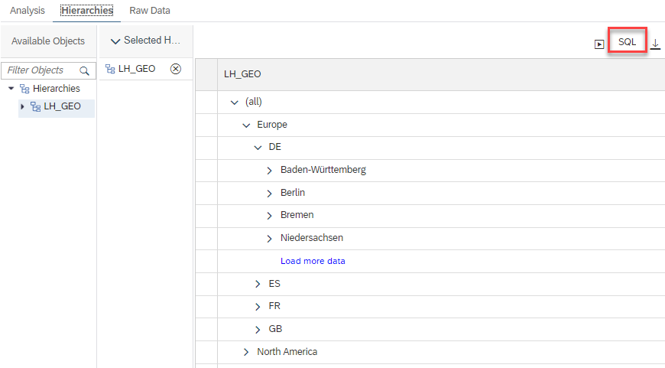 Using the button “SQL” the SQL query behind the hierarchy display is shown. This can be used as a starting point to create own SQL navigation queries or to generate a tabular format of the current hierarchy drill-down.

A new option is available to map these input parameters also to parameters of remote SQL and Calculation Views. With this it is, for example, easier to control at what processing stage and how a filter is applied:

Mapping of an input parameter to remote views

Several Union Pruning techniques exist that help to exclude early the processing of data sources of union nodes. Excluding data sources early can have a huge effect in terms of query runtime and memory reduction. For an overview of the different pruning techniques, see the SAP HANA Performance Guide for Developers.

This pruning technique can be used, for example, if an analysis is focusing only on data sources that contribute to a measure of interest. In this situation the measure can be defined as a Focus Column. 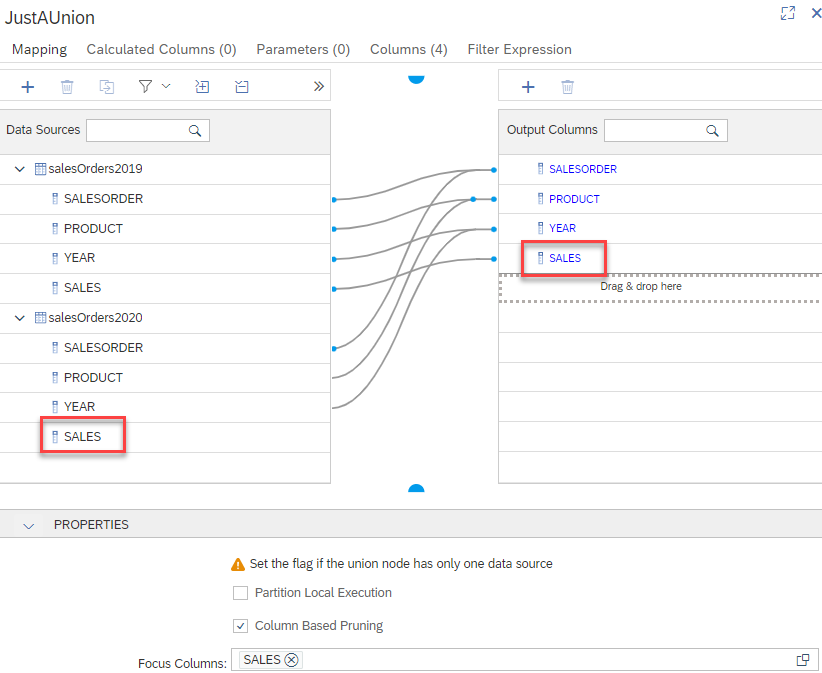 Mapping in Union: Measure “SALES” is only mapped from the first data source

As a consequence, data source “salesOrders2020” will be pruned because it does not deliver values for the Focus Column “SALES”. This means that the result will only contain entries with year “2019”:

Only values from data source “SalesOrders2019” appear in the result

If column based pruning is switched off,

Column based pruning is switched off

records of both sources are delivered:

A Where Used button is now available that lists all places where elements like input parameters, calculated columns or restricted columns are used within the current model.

This information can be helpful e.g., during refactoring steps or during debugging of a view.