What does it take for your team to be a high-performing team? 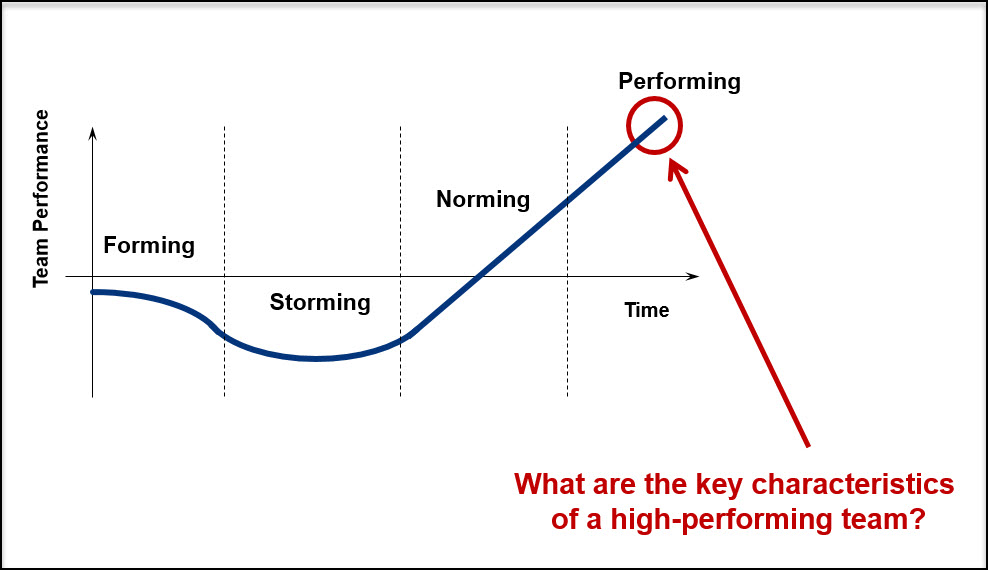 I have been a people manager at SAP for 20+ years, working with ABAP development teams on solutions for insurance (SAP Claims Management) and logistics (Project Manufacturing Management and Optimization (PMMMO), PMMO blog posts). Since I also like to understand the rules that govern how things happen (maybe because I am a former physicist*), I spent some time learning about the “rules” that govern teams: How they form, grow, and – ideally – turn into a high-performing team (HPT). All of us are in a team of some kind and we all interact with teams, so this topic seems to be relevant and worth spending 4 minutes. And just to clarify: When I write a about HPTs I am referring to teams that perform at a level that exceeds what can be expected by “adding” their individuals’ skills. These teams often feel special, get a lot of things done and seem to have a lot fun. So much so, that one can get envious not to be part of them.

Let’s start with the principles of how teams develop:  According to Tuckman, a newly set-up team will live through several stages that are all necessary for a group of people to grow together to a team:

When looking at this sequence it becomes clear that the team members need to develop a shared sense of team identity and need to give up part of their individuality. That’s a challenge and some team member will not be able or willing to commit to that mental change.

Now, let’s turn our attention to HPTs:  What are the characteristics of HPTs and how can one trigger their formation?

So, back to my initial remarks: It seems that there are indeed some commonly agreed upon “rules” that need to be met in order to be a high-performing team: They definitely need to have a purpose and a strong sense of (superior?!) identity.  The team’s chemistry (trust, accountability, conflict handling skills, sense of community) shall be good and they must enjoy themselves at work.

What do you think?  Which characteristic of a HPT is missing?  Have you been part of a HPT and, if so, how was your experience?

*In the 1990s, when I joined SAP, the acronym SAP in German also stood for “Sammelstelle Arbeitsloser Physiker” = “gathering place of unemployed physicists”.

Note that an earlier version of this post first appeared in my personal blog at https://managepeople.wordpress.com/team-development-and-high-performance/.

Having lead ABAP and technical teams (mostly introverted unemployed physicists) for many years, after reading this (as the most extroverted-introvert I know) all I can say is Brilliant! I can only imagine how your code looks 😉

My view on HPT's is, once the Forming, Storming and Norming phases have occurred, it's critical to recognize and accept that certain sense of individuality, quirks, idiosyncrasies etc. should be allowed to return with the various high performing team members. Examples of such: certain team members might want time-off during the work day for religious reasons, or for an extended period to join a pilgrimage, others might not be morning folk and only get to the office later than the norm...etc.

Accepting a certain degree of the need to return to the "given up part of their individuality" is important during the Performing phase. It not only strengthens trust, resolves conflict easier, holds everyone accountable but it allows for lots of fun, banter, camaraderie and solidifies the "special" identity that is laser focused and always aligned to the delivery of the common goals, purpose and objectives of the team.

Just my 50 cent, but I have seen so-called "managers" destroy HPT's, through micro-management of individual team members, instead of leading and allowing for the peculiarity of those individuals outperforming the rest!

To all the execs/managers out there "managing" vs. Leading High Performing Teams:

“If You Think It’s Expensive To Hire A Professional To Do The Job, Wait Until You Hire An Amateur.”

Thanks for your kind words, Anthony. And yes, I full agree. Individuality is critical and it is important to feel safe at work and being who you are. The mental energy that unnecessarily flows into pretense cannot be used for creating software that delights our customers 😉