SAP Data Warehouse Cloud is a cloud-native data warehouse which specifically targets business users. It does so by focusing on superior ease of use, super-simple data collaboration within an organization, its ecosystem as well as third parties. It lets users seamlessly integrate data from both SAP and non-SAP sources and easily visualize their data with SAP Analytics Cloud.

SAP Data Warehouse Cloud’s market place enables new use cases such as joining data internal to your organization with external data in a few clicks, such as joining your supplier inventory with your inventory, comparing your salary offerings with those typical in the job market for comparable roles, comparing own business performance with external economic indicators, enriching one’s business partner data with external ratings or economic performance and many others.

It is fully clear though that the challenge of data integration does not end once the data is brought from SAP Data Marketplace or custom source systems into your workspace.
Joining one’s own data with newly acquired data sources is a challenge in its own right: unless all involved data is clean, any straightforward join between two datasets that belong together “in principle” regularly suffers of some or even many exceptions – be it special characters, typos, duplicates, fuzziness in the data, leading zeros, spelling differences or many more. For these exceptions, decisions need to made by subject matter experts in the business (since they know the data) without the overhead of complex SQL code or long transformation in ETL logic.
Dealing with these exceptions often causes most of the effort and data integration costs.

This blog by Jan Fetzer inspired me to try using Intelligent Lookup in my language, Japanese, to test its capabilities with a non-latin language.

Why traditional joins fail to solve my issue

My goal is to reproduce a situation which often happens in customer organizations. I want to create a report which lists the sales amount by product and by customer. However, my company operates over 2 separate channels :

The customer and sales data are registered in two different databases : This means that I need to work with 2 disparate datasets which DO NOT share a common key to create my sales report.

The first dataset ERP_Customers holds the customer master data maintained within my central ERP system. It contains a CUSTOMERID field, as well as the name of my customers in kanji, their gender, age and contact information.

The second dataset EC_Customers holds the customer master data from my E-Commerce website.
The EC_ID does NOT match with the ERP CUSTOMERID field.
I also have the name of my customers in kanji, their gender, age and contact information.

Traditional joins based on e-mail, customer name and other attributes will match some customers. However they will leave thousands of customers which need to be matched manually or cannot be matched at all.

Solving the problem with Intelligent Lookup

Intelligent Lookup solves the problem with an entirely new approach by iteratively building up a match table in the background that keeps track of entries in the input table matches to entries in the lookup table.

Intelligent Lookup is a standard operator in SAP Data Warehouse Cloud which creates an artefact that can subsequently be used for modelling, similarly to a Graphical or SQL View.
After creating a new Intelligent Lookup, users see a template canvas that they need to fill with life. 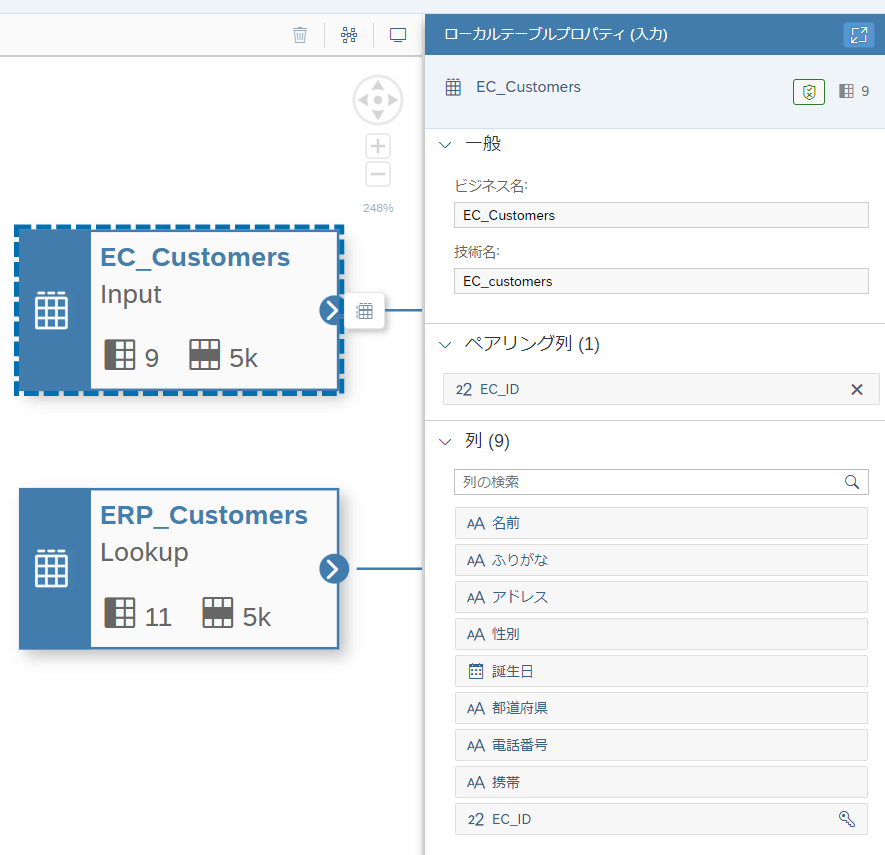 EC_Customers is the input table. EC_ID is the pairing column 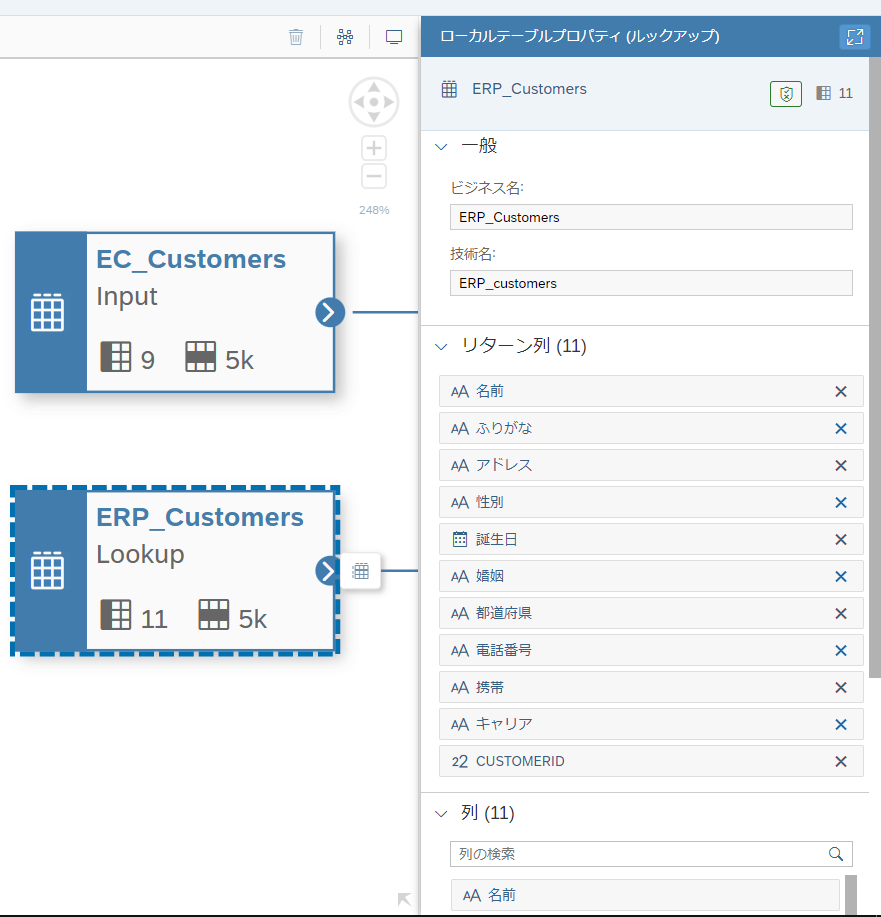 ERP_Customers is the lookup table. 11 columns are returned

When the input and lookup tables are defined, the user can start adding matching rules : choose the match strategy (exact or fuzzy) and choose the participating columns.

I defined my first matching rule as an Exact match on E-mail. Then, I deployed and ran the operator. In the background, Intelligent Lookup deploys the pairing table, the respective code snippets that do the match logic as well as the output table which joins over input table, pairing table and lookup table.

After deployment, here are the results : 70% matched. The rule could identify 70% of my 5000 E-Commerce customers which are referenced in my ERP by their e-mail. 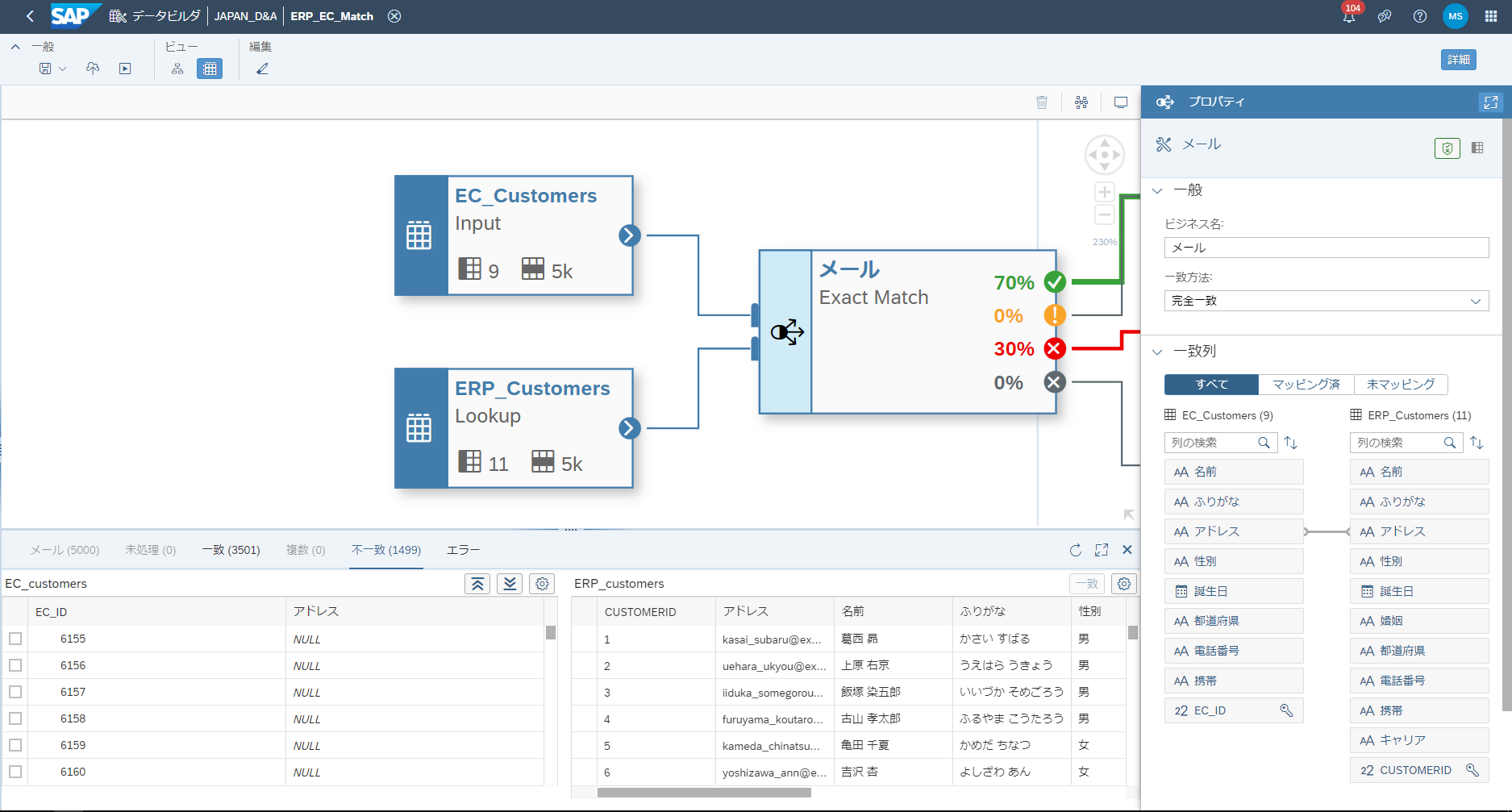 The intelligent lookup lets me run those 30% unmatched records through another match.This time I set up a fuzzy match on name(kanji), name(furigana) and gender.

23% of my 5000 E-Commerce customers are automatically matched with a customer in the ERP based on their names and gender. 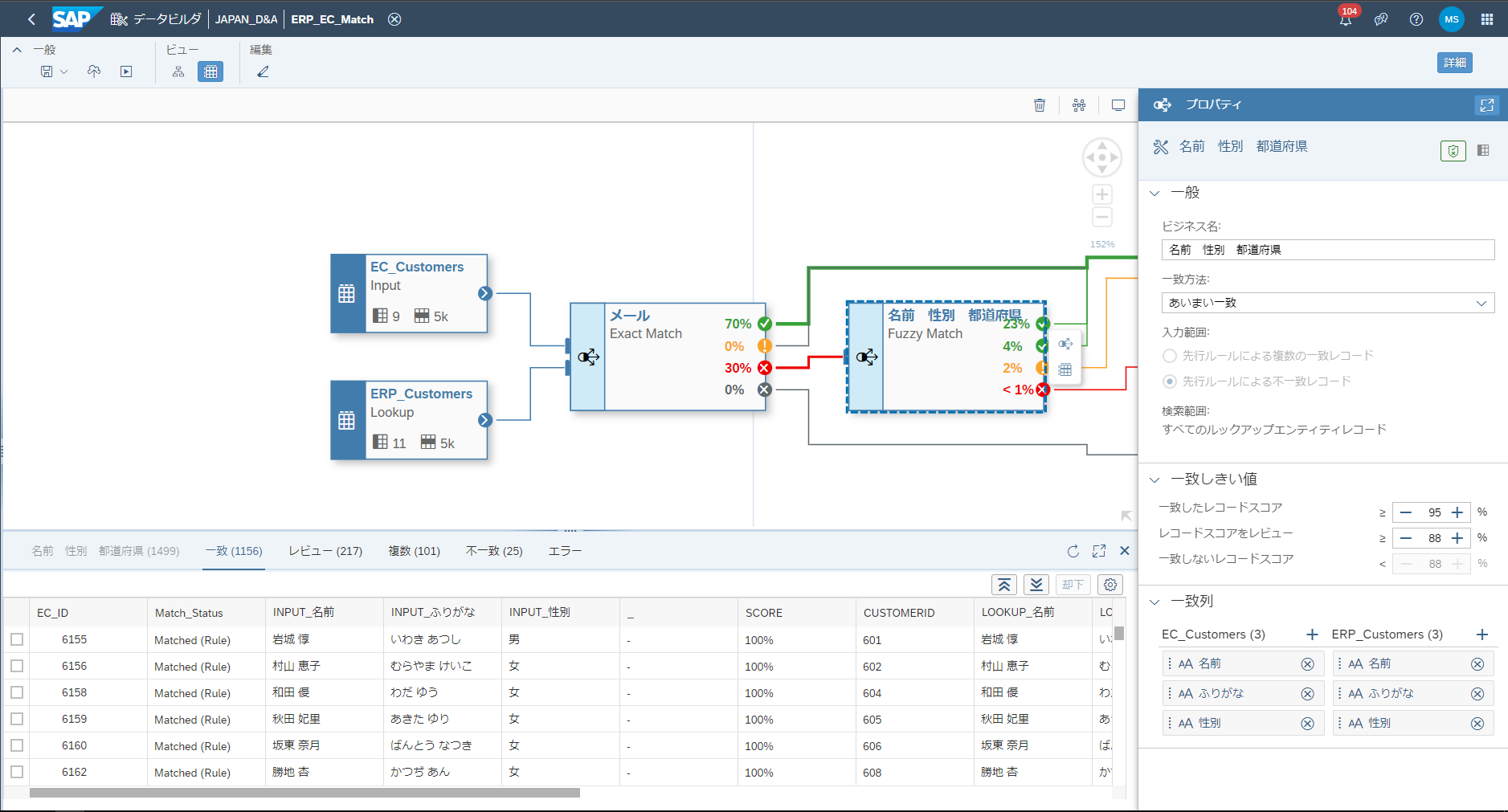 By switching to the review tab, you can review the 4% of records which need approval.
I could click on each record and decide whether or not to accept the suggested match. 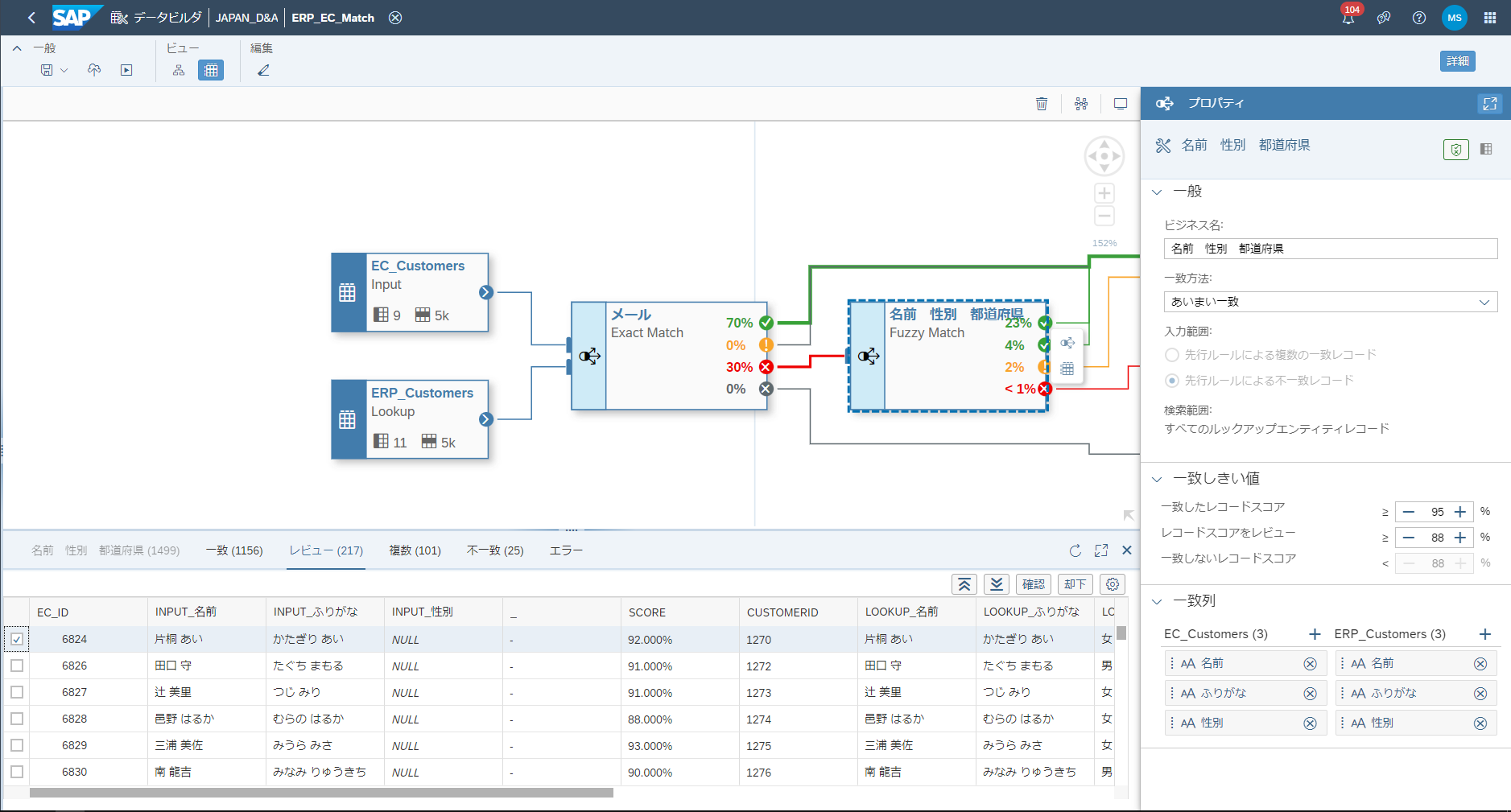 Within the ‘multiple matches’ tab, I can manually match each record which has more than 1 match above the review threshold.

Kaoru Sakakibara is an interesting example, two people in my ERP customer list share that same name. Therefore they both have a match score of 100%, this shows the limit of matching customers based only on their names. Fortunately, they live in different prefectures and have a different phone number. So I could manually match them based on that information. 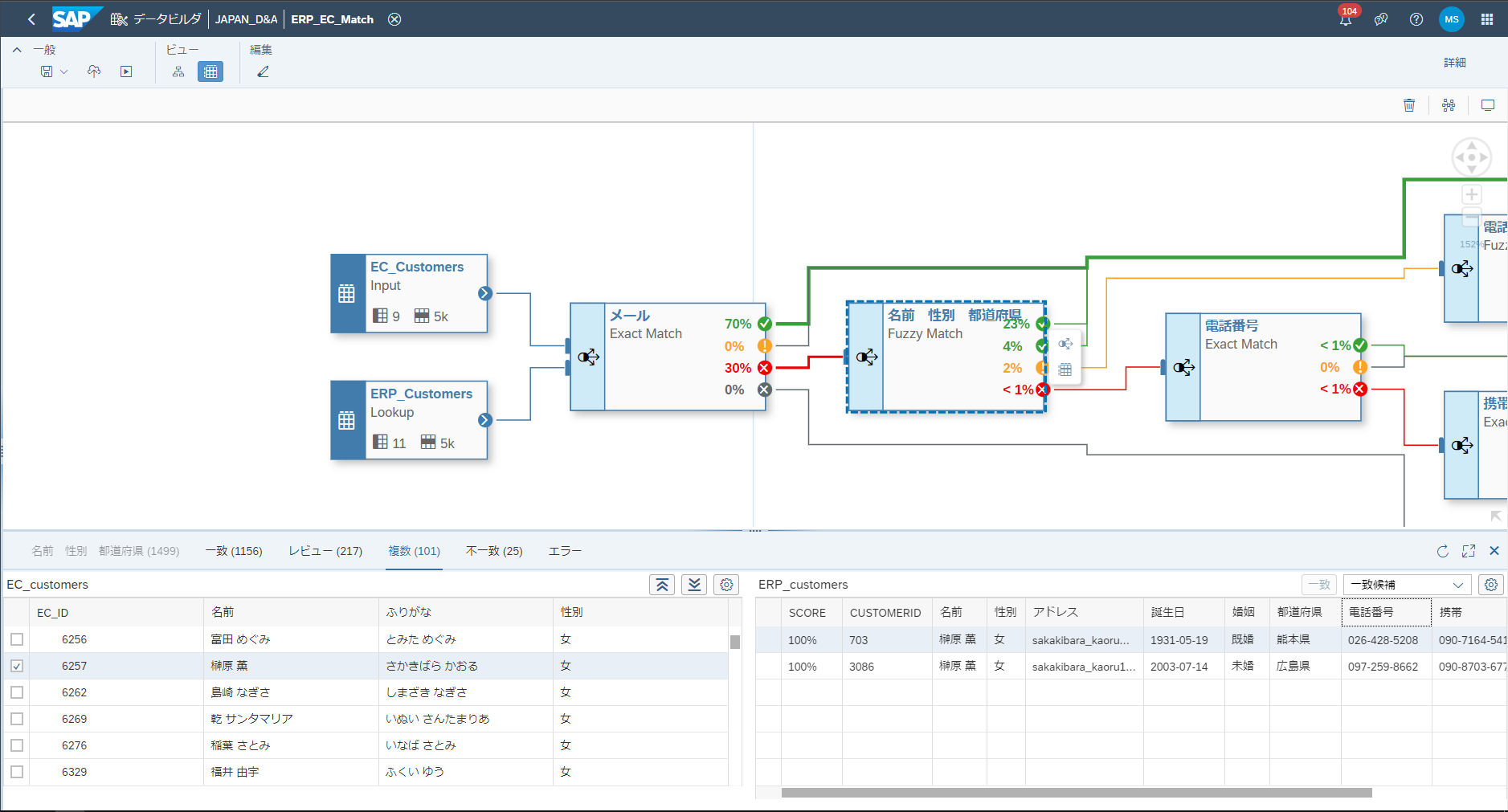 101 records have multiple matches. Some customers share the same name.

Finally, 25 records could not be matched based on their names and genders. 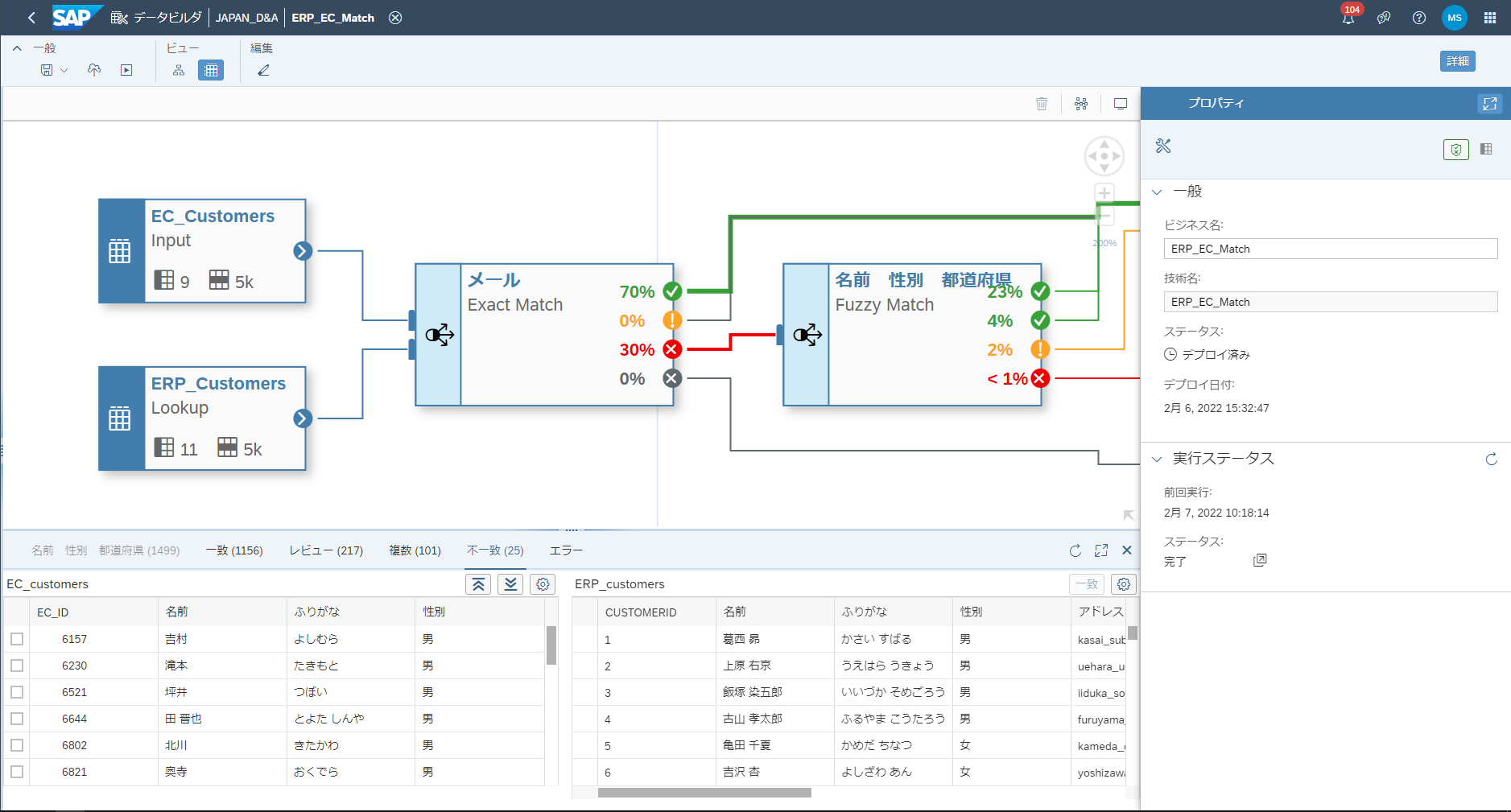 By taking the unmatched records from the previous step through two exact matches, on fixed phone and mobile phone, I managed to reduce the number of unmatched records to 2. These records lack any usable information to be matched and will need to be excluded from the analysis. 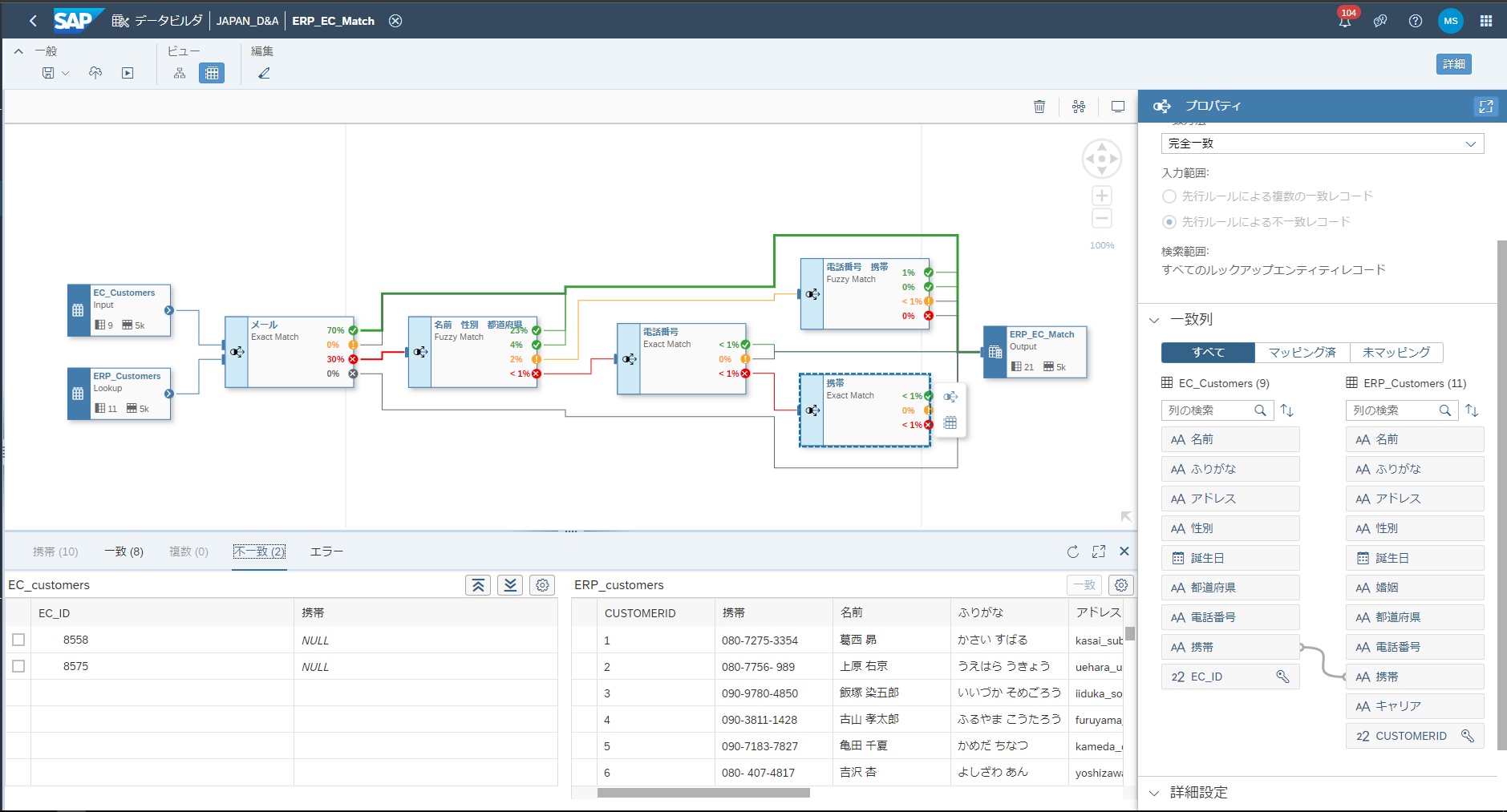 As for the “multiple matches” records, I ran them through another fuzzy match, adding the prefecture, landline phone number and mobile phone number.
Out of 101 records, 66 get automatically matched and 35 still have multiple matches, which need to be manually confirmed. 35 records still have multiple matches, which need to be confirmed manually

In a few minutes, I reduced the numbers of records which need to be manually processed from 5.000 to less than 100. We still need to work through some match candidates if we so choose, or we leave it at that. In the output view configuration, we can now decide how we continue from here: 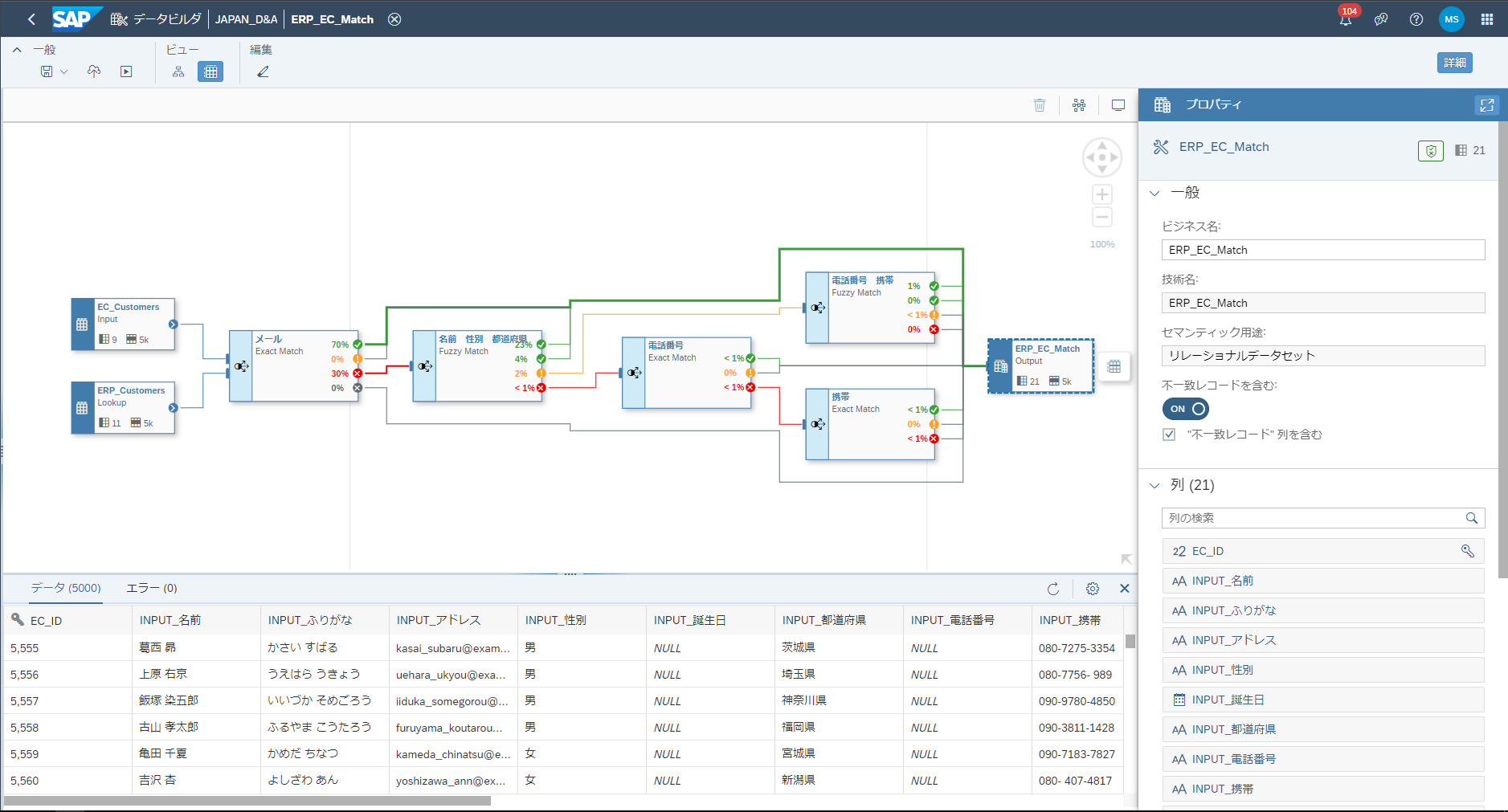 Output of an Intelligent lookup

Building a view based on an Intelligent Lookup

Based on the results of the intelligent lookup ERP_EC_Match, I joined all sales orders & sales orders items from my two channels(In-store sales and E-commerce sales) in the graphical view ERP_EC_GraphView

I assigned the semantic type “Analytics dataset” to the view so that it is exposed to analytics. 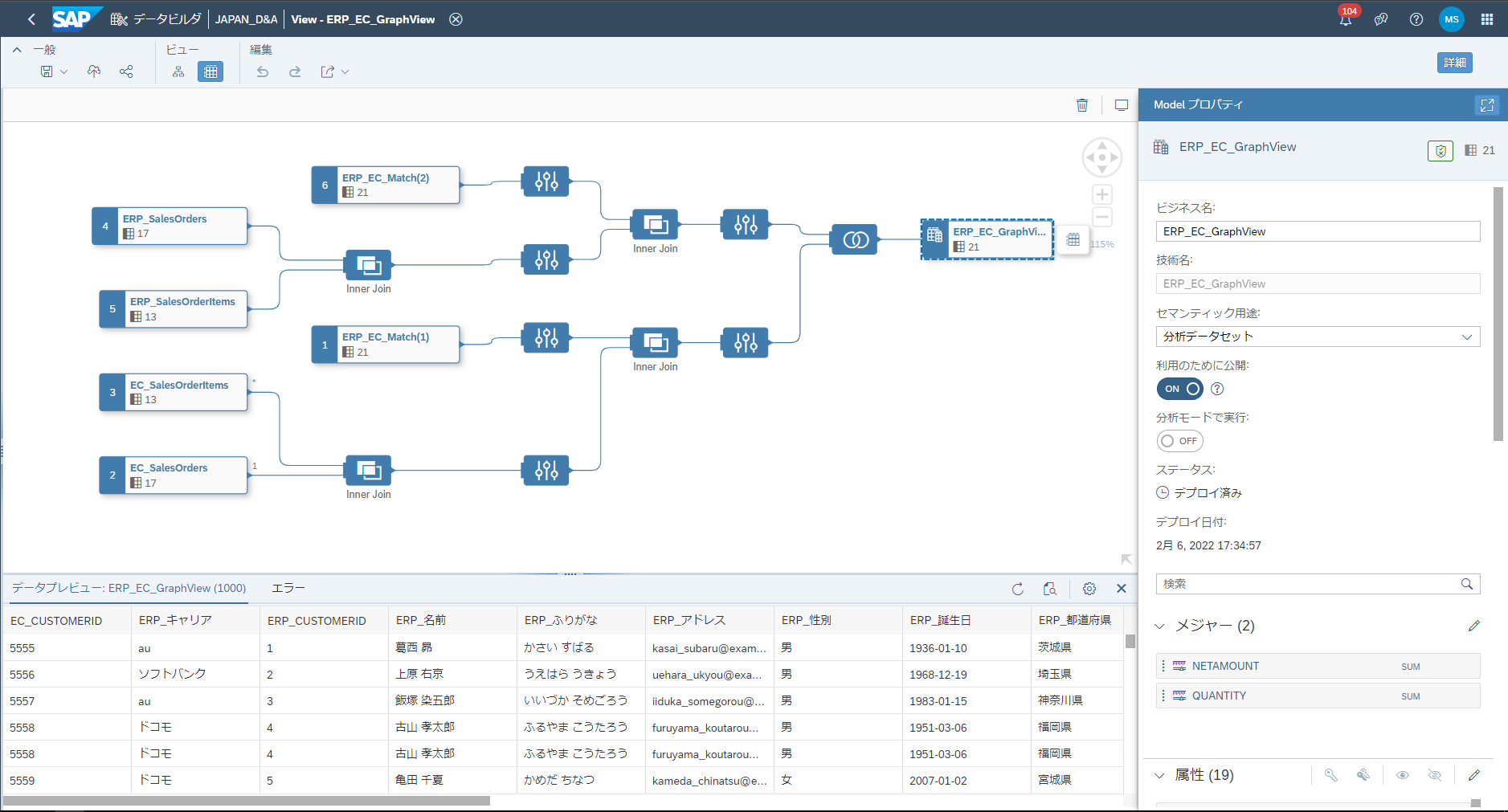 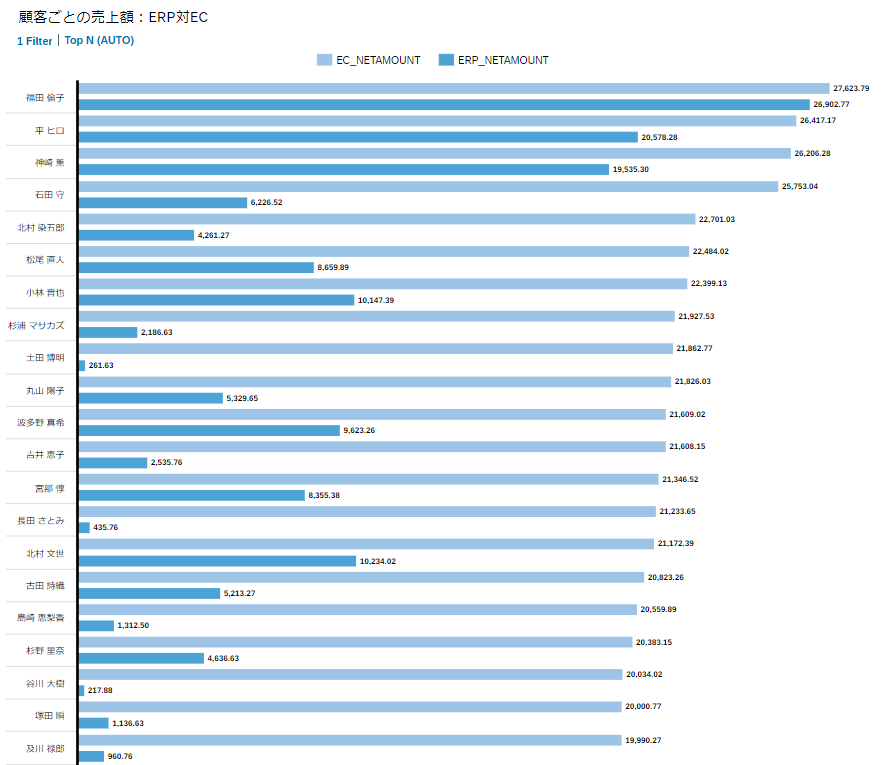 Highest sales by customer, for ERP and EC 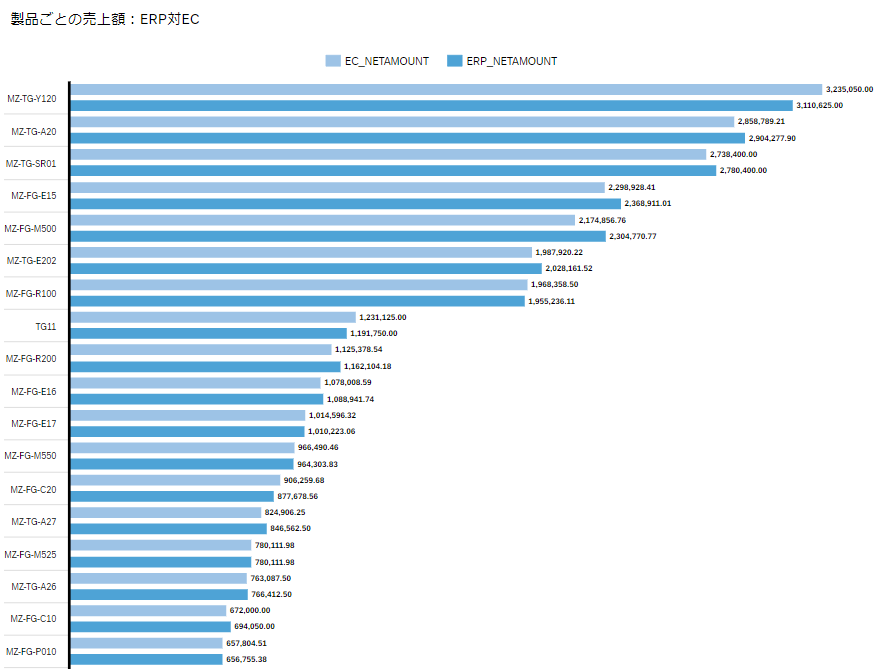 Highest sales by product, for ERP and EC

Intelligent Lookup is a new way of solving a painful problem in data integration: bringing data together that semantically fits, but doesn’t share a common key.

By allowing users to design matching rules that either automatically match the records or allow users to take a final match decision, Intelligent Lookup strikes a clever balance between automation and end-user-centric decision making.

Of course, when new data is loaded into the transaction tables, all these matches will automatically be reused without any further user intervention. This match will now be used automatically when data comes in, and update my data on SAP Analytics Cloud. This means that we just created a re-usable entity whose value grows over time. Benefit from subject matter experts decisions and don’t ask them again for the same match making.

Thank you for reading,