Manage your hierarchies in FIORI 1/3

In this blog post series, I will provide an overview of the functionalities available for managing hierarchies in SAP S/4HANA. I will also discuss some of the interesting features and limitations of the FIORI apps supporting hierarchies.

Blog 3/3: Detailed features of other FIORI app to manage hierarchies

In SAP S/4HANA hierarchies are used in reporting data and in processes like allocations.

Like the concept of Universal Journal for finance transactions, SAP has transitioned to Global Hierarchies as a single tool for managing hierarchies. In the pre-HANA world, hierarchies were maintained using multitude of apps and transactions. Managing hierarchies were time consuming to maintain and were prone to errors. Each hierarchy was housed within its own app. Any creation/ change to the underlying object does not automatically reflect in all relevant hierarchies. Maintaining hierarchies was an extensively manual task. If new hierarchies like Financial Statement Version are required, then a customising request will be required to transport the hierarchy from development environment to production.

Global and Flexible Hierarchies have the following features and advantages (source: SAP).

In this blog, we will review the above key features available in these apps. We will explore the feature limitations of these apps. The blog will also explain how to set up and use these apps to best suit your requirements.

In this FIORI app, Hierarchies can be created in one of 2 ways:

If you wish to re-use hierarchies created in SAP S/4HANA in FIORI, you can import the hierarchy rather than create it afresh using the F2918 app. It is recommended that once Hierarchy is imported into FIORI, we should not use or update the hierarchies in S/4HANA. All future maintenance of that hierarchy should be done in FIORI app F2918.

The two types of hierarchies are not compatible.

“The hierarchy IDs from Fiori app F2918 won’t be offered by OB58 (transaction or app). There are several options to get “Financial Statement Versions” that were saved at table T011, to introduce them at “Hierarchy Runtime Representation Persistence” (HRRP*) tables, so that they can be used in reporting apps. There is no option in the other direction (to replicate entries from HRRP tables to “classic” master data tables).” (SAP note 3064994 – requires SAP S-User ID).

In S/4HANA 2020, only the below hierarchy types can be imported:

Financial Statement Version can be imported as below.

Step 1: The hierarchy should be activated in SAP S/4HANA. In edit mode, when you save any changes to the hierarchy, the system will prompt you to activate the hierarchy. This activation will replicate the hierarchy in FIORI. This replication to real time hierarchy allows it to be available for use in FIORI reports and in this app F2918 for import. 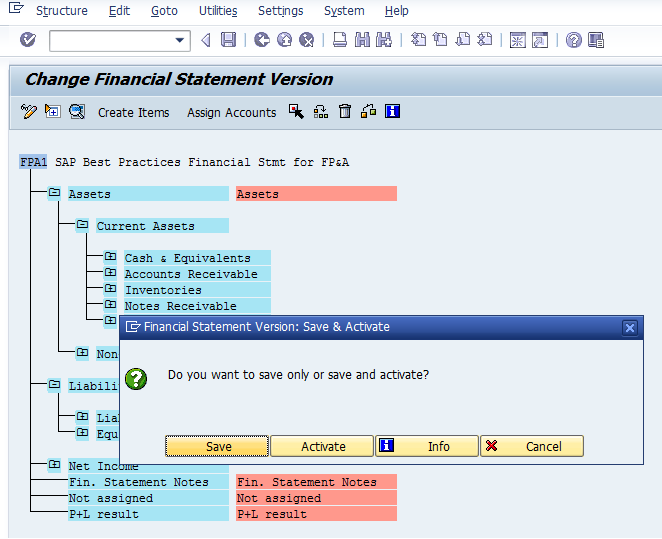 Step 2: If hierarchy is not active, you can manually activate the hierarchy.

Step 2.2: This will make it available for replication using HRRP_REP 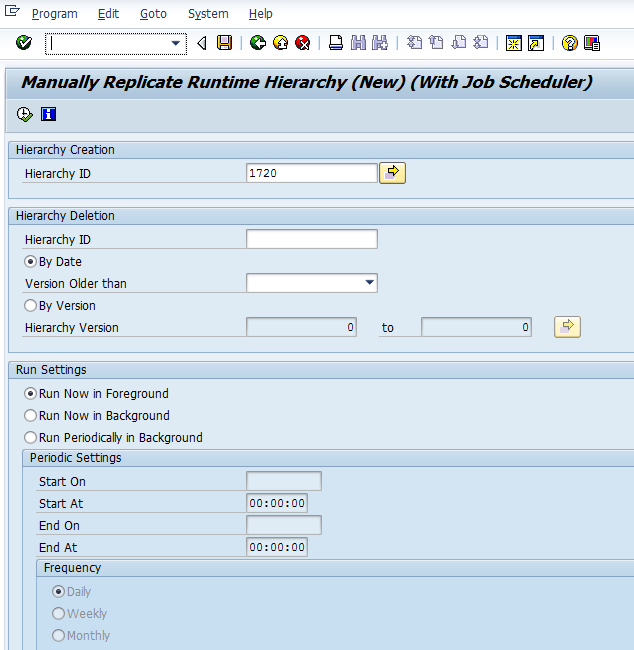 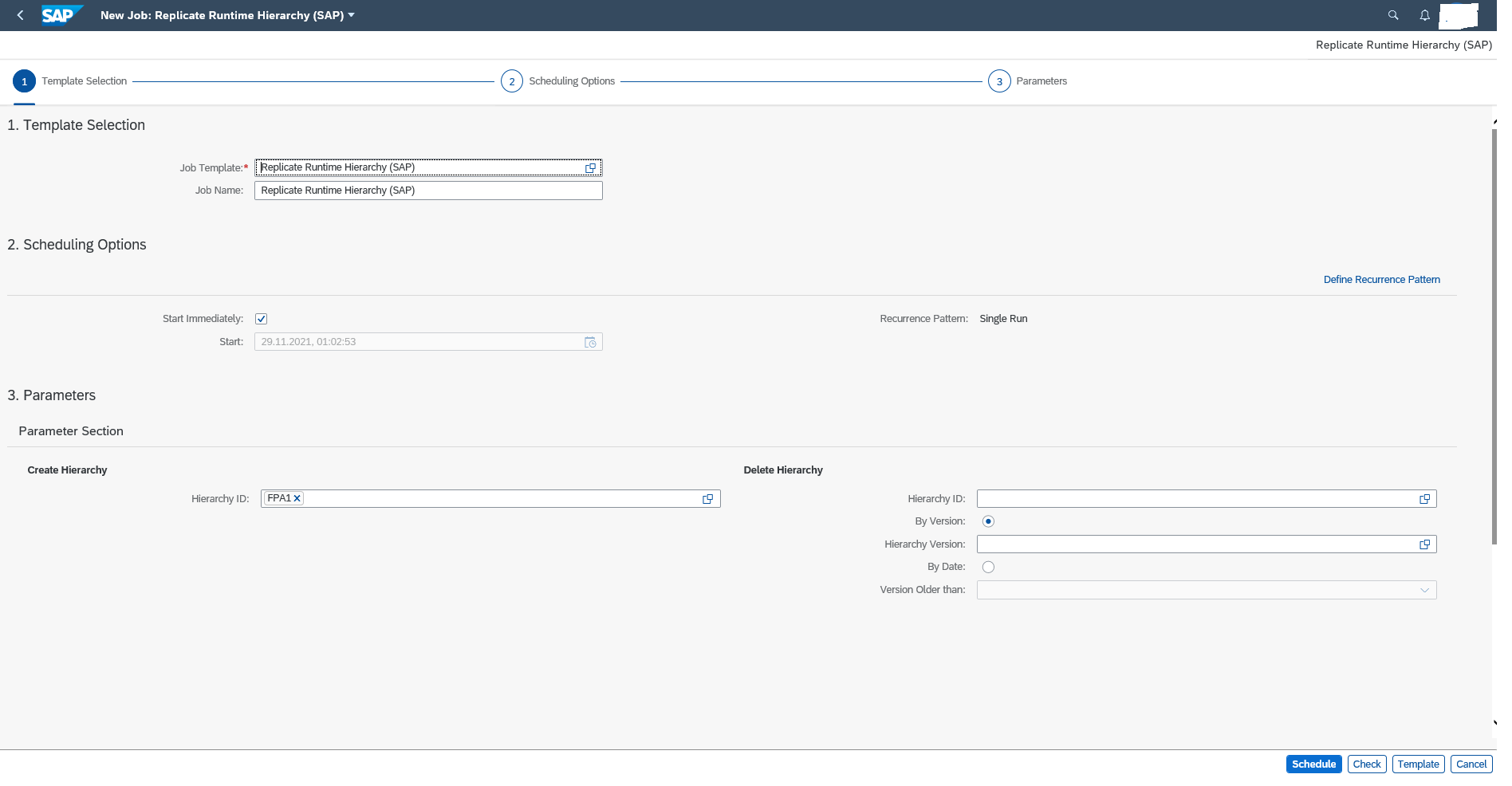 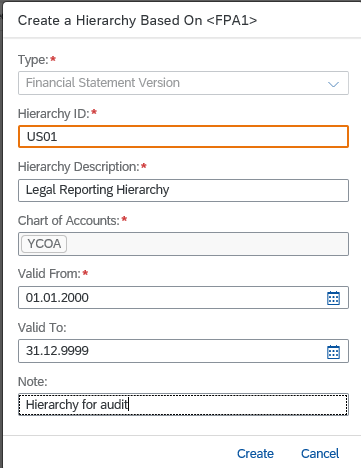 Steps to import other hierarchies

To import any of the other hierarchies, there is no need to activate the hierarchy in SAP S/4HANA. Flexible hierarchies exist only in FIORI.

SAP S/4HANA has some standard hierarchy types delivered. Hierarchies can be created for Funds, Grant, Consolidation, Company Code, Functional Area, Product, Segment, Universal Allocation and WBS (hierarchy types that can be imported can also be created).

Customers can create their own hierarchy types based on pre-delivered dimensions. We will discuss this separately in “F3553 Manage Custom Hierarchy Type” section in Blog 3/3.

Hierarchies not available in F2918

Hierarchy: some points to keep in mind

FSV from GUI available in FIORI

SAP help documentation on Global hierarchies is below:

In the next blog post, I will elaborate on the functionalities available in FIORI app F2918.

Please leave feedback in the comment section of this blog post. You can ask questions to the SAP community in the Q&A S/4HANA Finance Area. 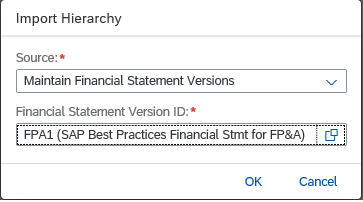 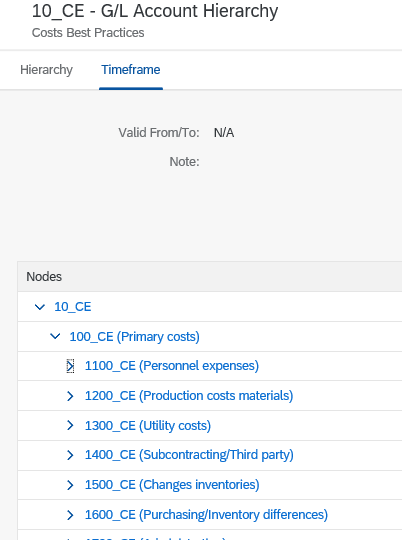 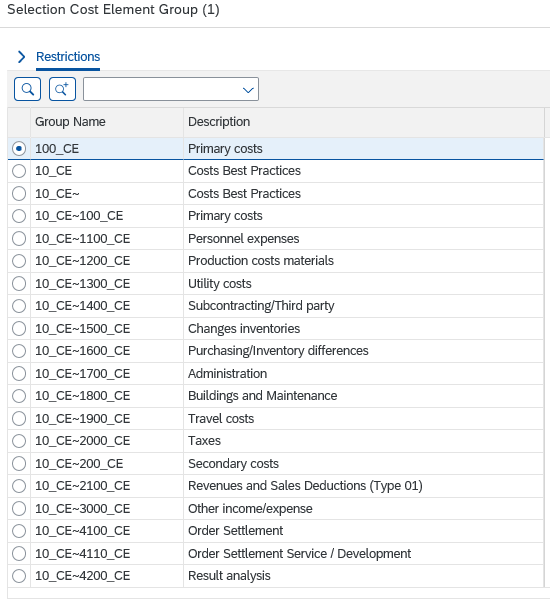 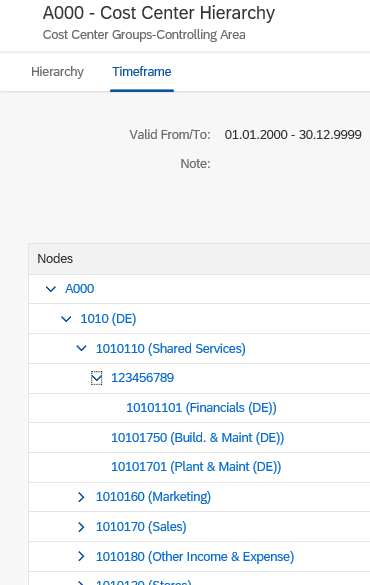 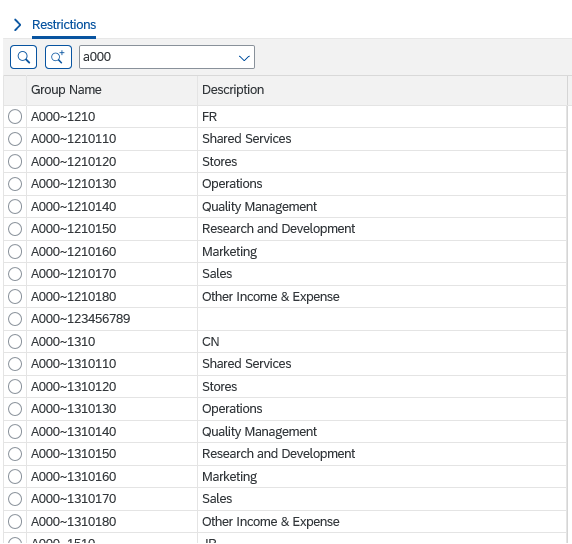 Hi Rajesh, thank you for providing an overview of the functionalities available for managing hierarchies in SAP S/4HANA. Quite a change from the ECC world!

Question: Does SAP provide an app or utility to convert standard SAP (parent-child) hierarchies into so-called "attribute" hierarchies (e.g., Profit Center X, Level1 Key, Level 2 Key ... up to, say, Level 10 Key).  Reason: We use Power BI for analytics and Power BI requires hierarchies in "attribute" format. It would be great if there was such an app.

I do not have an answer for you right now. Data is stored in HRRP_NODE table as a parent-child relationship where you can identify the root node/ leaf. Would that help in consuming data into PowerBI and build the hierarchies. Do you connect PowerBI to HANA database or trying to consume as a flat-file?

Since you have challenged me, I will connect our PowerBI to HANA and try this myself. I revert to you, if at all this is possible. I will need some time though. Thanks

We are implementing S/4 HANA  version 2020. Can the flexible hierarchy be used as an alternative to the standard hierarchy? The client has given a structure with repetitive nodes - e.g. Marketing under each company code of the controlling area. The standard hierarchy is not allowing duplicate entries. Can we manage this by creating a company code specific hierarchy using FIORI app? Please confirm.

Flexible hierarchy is a self-generated hierarchy based on cost centre attributes. You are not allowed to edit it.

Standard Hierarchy should represent the legal organisational structure grouped by region or company code. Node descriptions can repeat, node ID cannot. Not sure if this answers your question.

is it possible to extract the new Global Hierarchies to BW? I mean, is a new SAP standard extractor available? Or do the "old" extractors still work? Extractors like 0GL_ACCOUNT_T011_HIER_2, 0PROFIT_CTR_0106_HIER, 0COSTCENTER_0101_HIER, ...

Any news on that?

Thanks for you explanation. Do you know if it's possible to have an automatic up date from the noddle in the standard hierarchy from cost centers for example ?

Thanks for you help.