It has been a while since the usage of UI5 Web Components inside OpenUI5 has been shown as part of the UI5ers live episode 6 in March 2021. Finally, it’s time for an update.

Web Components are the browsers` built-in UI element framework. It comes with a 0kB of footprint and is available in all major browsers as of today. Web Components enhance the browsers standard vocabulary by custom HTML tags which encapsulate the content (HTML), presentation (CSS) and behavior (JS). Web Components are built on top of the following web platform APIs: Custom Elements, Shadow DOM, ES Module and HTML Templates. As Web Components rely on web standards support by all modern browsers, their benefit is to work with most of the HTML-based web UI frameworks out-of-the-box.

Besides that, UI5 Web Components already provide a comprehensive set of UI elements for your application development, and they are available for free as Open-Source under the Apache 2.0 license.

And what about OpenUI5 and SAPUI5?

Also, OpenUI5/SAPUI5 doesn’t support Web Components natively. The reason for that is that it abstracts HTML/CSS from developers. Instead of working with HTML/CSS directly, the developers are working with UI5 controls when creating their user interface.

UI5 controls are the link between the HTML/CSS world, the framework, and the programming model. When embedding 3rd party controls, such as Chart.js, ACE, or TinyMCE, best is to write a custom UI5 control to manage the rendering and properly connect to the rendering lifecycle.

For Web Components the framework has been extended by adding special base classes which take care for the rendering of the custom tag, managing the properties, assigning the aggregations to slots, and registering the custom events. Every Web Component which should be used in OpenUI5/SAPUI5 needs to be wrapped by such a so-called wrapper UI5 control.

The Web Components have been added as additional UI5 libraries. The central UI5 library for the enablement is sap.ui.webc.common which provides the base classes. The most important module is sap.ui.webc.common.WebComponent. It extends sap.ui.core.Control and is the wrapper UI5 control providing the glue code to integrate Web Components into the programming model. This wrapper control takes care to propagate the properties, the aggregation, and the events. It also ensures to render the control and put the aggregated controls in the dedicated slots of the Web Component.

These libraries are optional and can be added on-demand. But with the availability of these libraries in OpenUI5, some controls are redundant. There is i.e., a sap.m.Button and a sap.ui.webc.main.Button. The question now is: which UI5 control should I use?

Before we start to make our hands dirty, I would like to mention the performance topic. Performance is always key and is related to the number of bytes being loaded. Here, UI5 Web Components have a benefit compared to the classic UI5 controls. UI5 Web Components are atomic and provide their content (HTML), presentation (CSS) and behavior (JS) individually. UI5 controls just provide their content (HTML) and behavior (JS) individually but the presentation (CSS) is managed as part of the UI5 library. This is a big difference as the CSS per library grows with the number of controls being included in the library. So, using just a few UI5 Web Components vs. classic UI5 controls will require less bytes to be loaded. In future, we will see what is possible with this benefit – let’s wait for UI5con ON AIR in July 2022! 😉

Right now, the UI5 Web Components enablement is only available in OpenUI5. Still, there are a few things missing. The API documentation needs to be reviewed and proper sample pages need to be created. Right now, we are also checking the usage of the wrapper UI5 controls in combination with the classic UI5 controls. Another reason for this is that we want to get some feedback first before we finally submit the enablement in SAPUI5 because once it is submitted in SAPUI5, we need to stay compatible forever! But there might be the possibility to release them even earlier in SAPUI5 by marking them experimental.

The fastest way to get started with OpenUI5 and the UI5 Web Components enablement layer is to use a very simple JSBin example: https://jsbin.com/peqaxet/1/edit?html,output. This sample is loading OpenUI5 from CDN and is directly using a sap/ui/webc/main/Button and put it into the body:

This looks exactly like using the sap/m/Button within a UI5 application and if you run the application you will see the UI5 Web Components Button integrated as UI5 control.

Now, we will use the Yeoman generator easy-ui5 to kick-start your TypeScript UI5 application. Here you can see how all different pieces play well together: the Easy-UI5 generator, the UI5 Community templates, the OpenUI5 programming model, TypeScript, and most important here the UI5 Web Components inside OpenUI5. 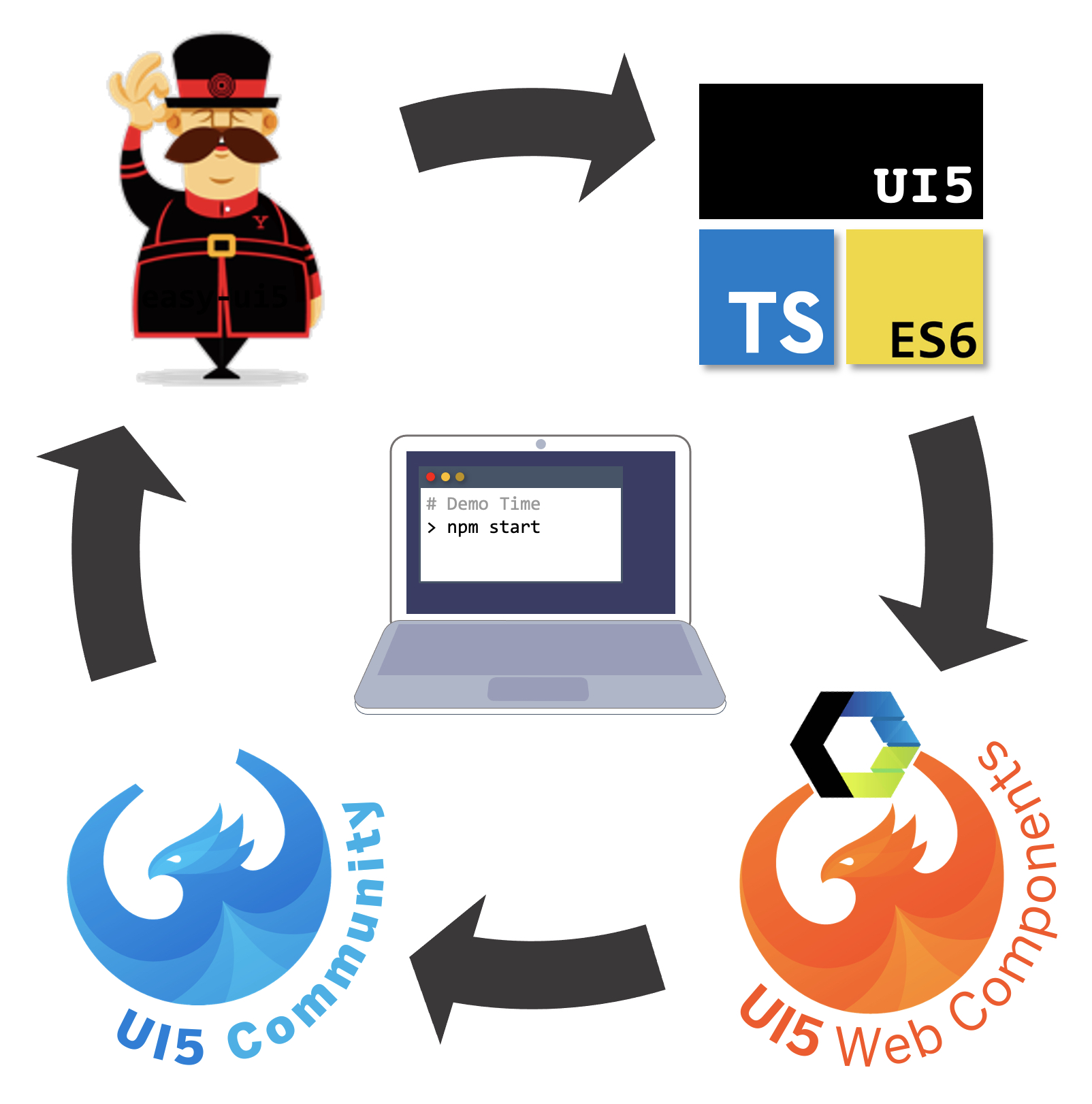 To get started, please follow the instructions here. The repository which hosts the state of the example below can be cloned from here (the state has been tagged as “blogpost”):

The example will also be enhanced in future…

To get started, you need to ensure that you have a recent Node.js version 14 or higher installed on your machine.

As a next step, you should install Yeoman and the easy-ui5 generator:

To verify, that the installation was successful, just run the following command:

Make sure you see the “easy-ui5” generator listed.

!! To verify the version of the installed generator-easy-ui5 you can run the following command:

The version should be at least 3.3.0 to be able to consume the templates from the UI5 Community GitHub organization listed here.

Now, you can start to create your first UI5 TypeScript application project by running the following command:

This directly calls the ts-app sub-generator of easy-ui5 which creates the project for the UI5 TypeScript application based on e.g. the following parameters:

After entering the parameters, easy-ui5 already runs npm install to ensure that you can immediately start working in your new project. If this fails, just re-run the npm install command again.

More details about the project, the project structure and how to use this project can be found in the project root in the README.md. As the project template is based on the ui5-typescript-helloworld project, you can also read the following README.md online.

To get an impression about the project and what it finally provides, just run your project in the development mode with the following command:

Now a browser window should appear which runs the UI5 application.

Before we can start to use the sap.ui.webc.main.Button in an XMLView we need to prepare the UI5 application.

1) Add the dependency to the sap.ui.webc.main library:

In the project root execute the following command:

The UI5 tooling is adding the sap.ui.webc.main library as dependency to the ui5.yaml. After that you can run your project again.

In the manifest.json, we replace the sap.m library with the sap.ui.webc.main library and remove the sap.ui5/routing section.

This is how the manifest.json should look like now.

3) Disable the router in the Component.ts:

In the Component.ts file, you need to comment the line which initializes the router:

4) Use UI5 Web Components wrapper controls in an XMLView:

Open the App.view.xml and replace the content of the view with the following one:

Open the App.controller.ts and replace the content of the controller with the following one:

In the controller we add the onClick event handler which refers to the Button from the event and looks up the Input and Toast by their ids. The toast will be finally used to display the text of the Button and the value of the Input.

When you add the code step by step on your own, you will notice that you get a lot of code completion support and assistance by your editor. TypeScript is automatically supported also for the UI5 Web Components wrapper controls as they also provide their control metadata and JSDoc which is used to generate the type definitions.

If you want to learn more about the TypeScript support for UI5, you can also follow the tutorial here: https://github.com/SAP-samples/ui5-typescript-tutorial.

The (UI5) Web Components enablement for OpenUI5 is already in a good shape. Besides the missing samples and improving the API documentation, there is already a good foundation to start playing around with the UI5 Web Components wrapper controls and develop UI5 applications using them. They play well in the whole UI5 ecosystem. If you are brave enough to do some experiments with the UI5 Web Components wrapper controls, we would highly appreciate to get your feedback. Enjoy working with the evolution of the UI elements in OpenUI5!

Time is ready for Web Components: now even more! 😉 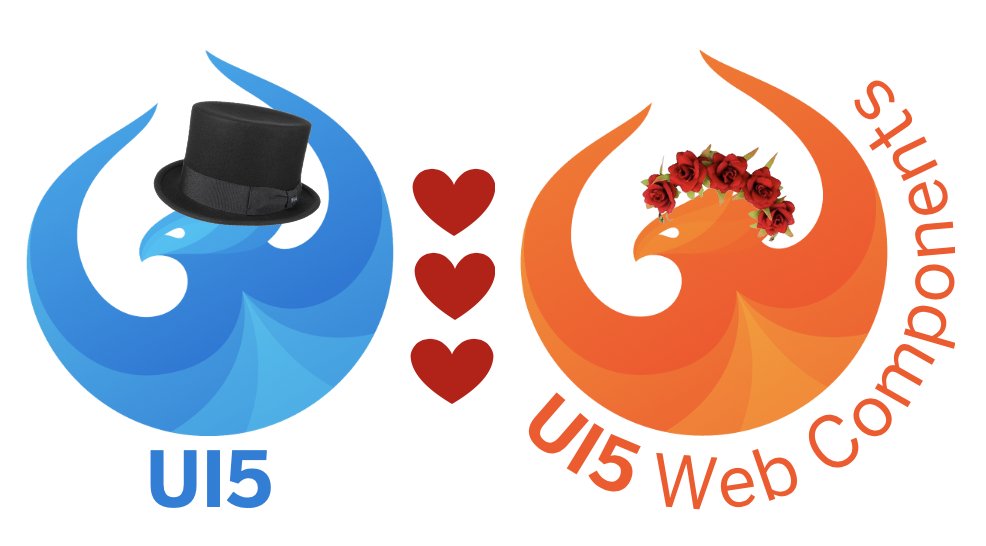 Fantastic news and a great walkthrough! Especially excited to hear that new controls in the future will be implemented as UI5 Webcomponents first. Overall, I think this is a great step towards streamlining all of SAP's UI offerings.

Great News and a great Blog post! I fell in love with what Web Components offer the Web Development space and It is really great seeing this being integrated into UI5. Good & smart decision to go Web Components first. Keep on killing it 🤟

great technical overview, how SAP will integrate WC into UI5.

I think, from the long perspective, maybe the current sap.m controls will be replaced by wc main, like the former desktop controls got deprecated.

But anyhow, SAP would only need to maintain one main lib.

Still waiting to get my hands on it.

thank you for your nice feedback. With OpenUI5 you can already start to make your hands dirty... 😉

Regarding one main lib: yes this is true. Migrating the sap.m Controls is unfortunately not possible due to compatibility. This was my initial thought that we could do so but we need to keep the existing applications using the Controls running. But we are working on unifying the foundation of the main UI elements in Web Components and Controls. This means that we ensure the max. possible reuse across both stacks. But as written in the blog post, the future goal is the build most of the new UI elements as Web Components. Most probably on the long perspective, the Web Components based wrapper controls will be used for application development. It's an evolution, unless there is no meteorite impact, it may take a while...

Dimo Uzunov
May 19, 2022 at 12:34 pm
Hello Peter,
Great blog post! Thank you for the detailed explanation and roadmap overview.
I have one more specific question regarding deployment of Apps build with SAP Web Components. We have a lot of clients which have SAP backend. Based on ABAP or BTP.
Is it possible to deploy Web Components apps to ABAP based repository?
If yes, how? In their core nature Web Components simply build a client side application but ABAP structure is a bit complicated and usually Web - IDE or BAS handles this structure to avoid problems.
I was thinking about creating a "shell" BSP app inside a package and deploy my code there via npm nwabap upload or via BAS directly. Even if that experiment works I'm not certain that's the right approach. Could you please advice ?
Regards,
Dimo