There are three levels of duties that you can manage in a single project: Person, Role and Team.

First, as you might already assume, Person is the one who is actually going to do a certain task. In other words, an individual member of a project is the Person, and in SAP Cloud ALM world, we call it “Assignee” or “User”.

Next, when you create a Project in CALM, it comes with a pre-delivered set of Roles. The Roles we are talking about here are Project Roles such as Project Lead and Business Process Expert. You can create a new custom Role in case you cannot find a proper one from the default list of Project roles. All of these default Project and custom Roles are termed as “Assigned Role” in SAP Cloud ALM in the Task Management screen. The difference from the Person is that multiple users can perform the same Role.

Lastly, a Team is a group of the Roles or Persons. How to organize a Team completely depends on project characteristics and your needs. You can utilize the “PMO team” only which is created by default, or you can create multiple teams to track various areas of work differently. Just remember that “PMO team” is special as

Now, let us see briefly how we can see all these levels easily in the Task List page. It’s simple. You can click Setting

at the top right side of the Task List page, and add these three levels in your filter. You can also create and save this view to access this view conveniently. 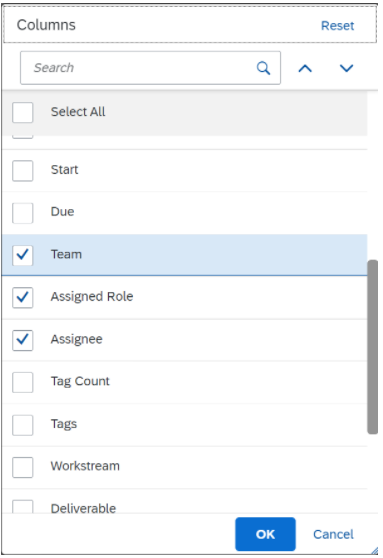 2. Recommendations on how to work with Person, Role and Team

As we learned above, you, as a Project Lead, can assign different Person, Role and Team to each task to manage your project efficiently. This could be done in multiple ways depending on your specific strategy, but you can also think about some fundamental questions as follows.

Keeping these questions in your mind, let us go over some specific user scenarios to give you some ideas to utilize this function.

First, suppose that you are a project lead of one small development project. You know every single member of the project and what they are doing. In this case, you don’t need many different teams. You can simply have one PMO team and include all roles and members in this team. Furthermore, it would be easy to assign a certain task to a certain individual.

In the other scenario, let’s say that you are a project lead of a very big scale project. You can create different teams and roles according to their functions and assign them at a rather high level instead of an individual level. For example, you can assign a set of tasks to a Development Team and allocate to each Role, without assigning a specific person.

3. Instructions to assign / re-assign Team, Role and Person to Task

Here, let us see step by step how to assign and re-assign the Team, Role and Person to each task.

Assigning a team to a certain task is simply done by clicking the drop-down menu of Team column in the Task List view. It can also be done in a detail view of each task. 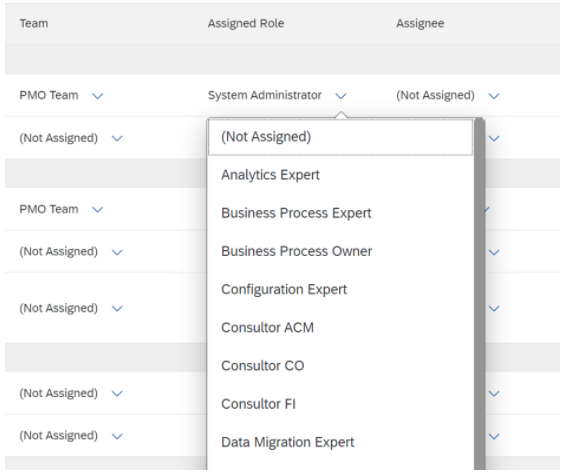 Assigning a specific person to a task can also be done in the same way we have learned so far. Different from the team and role that you can only choose from the closed list (default or custom), you can assign any person in your organization by searching function as below. 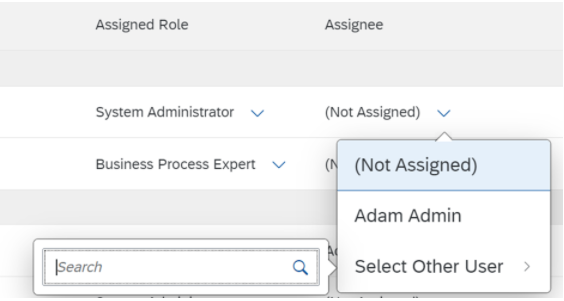 You can always easily re-assign Team, Role and Person which have been already assigned. You can basically repeat what you have done before. However, there are some rules for re-assignment that would be useful for you to be aware of.

Let’s say you have a project and set the Teams, Roles, and Assignees as you can see below from the table. You are Agatha, a Project Lead.

Similarly, let’s see what happen when you re-assign all of the tasks to “PMO team”. Then, the second task assigned to “Business Process Expert” and Rachel remains same, because both the Role and the Person belong to PMO team. However, the Assignee is cleared for the third task, since Bob does not belong to PMO team.

From this posting, you have learned what Person, Role and Team are in SAP Cloud ALM and how to assign and re-assign them to tasks. Furthermore, some recommendations to utilize this function are provided for you to make the best of this function.

In case you have further questions, you can always search Q&A in the community or post your own question with SAP Cloud ALM tag.

Hope you found this information useful. As an extension of the assignment function, you can also learn how to see Upcoming Tasks assigned to you and your role and how to check Task Distribution from this post.

Please feel free to reach out to us if you are looking for more information. We would love to hear from you!