In this blogpost you will learn how to create an SAP BTP development CI/CD pipeline integrated with Azure DevOps – allowing you to run pipelines on Azure DevOps that continuously deploy new features to SAP BTP, Cloud Foundry environment while still being able to benefit from complementing DevOps-related SAP BTP services, such as around transport, alerting and technical ops automation. With this, you get an example of how you can perform agile development on SAP BTP using a third-party CI/CD infrastructure – complementing the option to start simple by using SAP Continuous Integration and Delivery, where no separate CI/CD infrastructure would be required.

Let`s assume that you have for example an SAP Fiori application in a GitHub repository, SAP BTP QA and PROD subaccounts and execute some automated tests. This would give us the opportunity to verify the application, fix any inconsistencies and retrigger the pipeline, without interfering with the productive version. At the same time, we want to receive alerts whenever there is a change in the status of the pipeline.

To make the complete picture, we will add several SAP BTP services as: 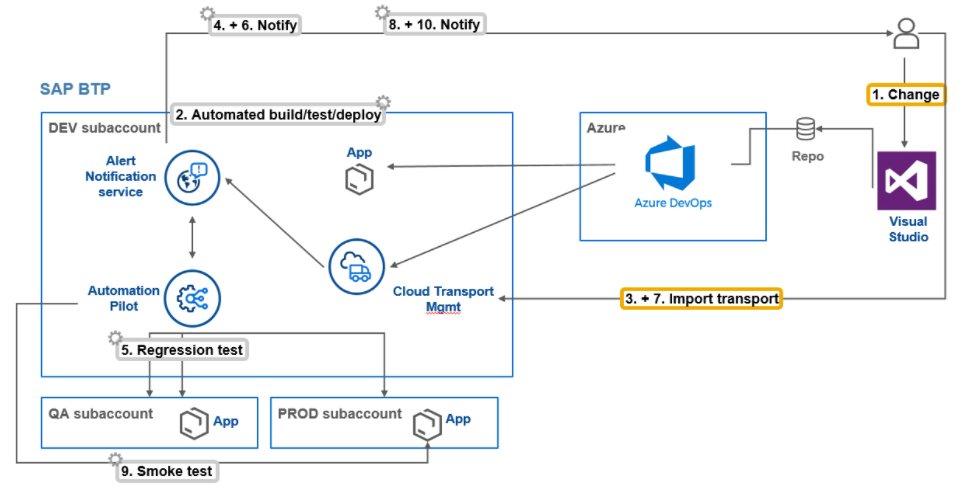 In order to complete the setup, you will need the following:

We will start the configuration with providing all the SAP BTP DevOps services that have to be enabled, to get the whole process working. For detail information and examples how the services must be configured, follow this blog post: https://blogs.sap.com/2021/11/24/establish-an-automated-continuous-end-to-end-development-process-on-sap-business-technology-platform/

In CTMS, you have to create and configure the nodes which are needed for the route. You need to enable the alerts and create the needed destinations in the SAP BTP subaccount. As described in the blogpost above, follow steps 9 and 10.

The following configuration part is only about the required steps in the Azure DevOps and how you can setup the pipeline with SAP BTP services. After you have all the SAP BTP services configured and setup, you can follow the steps that are described here:

In order to start with Azure DevOps, you should have an Azure account and navigate to the DevOps organization. Create an organization if you don`t have one and create a project:

6. In this step we have to create our .yml file or so called later “script” for the pipeline. I have modified a template provided in this blog

Code snippet of my extension for the deploy to CF and Upload to CTMS:

Note: There are some adjustments in the bash lines that have to be done under “Upload to CTMS” stage, in order to get the working script for you, so fill the <> with the required fields:

Once you have all the configuration steps completed, let`s see if the process is working as expected.

First, for that reason, we should make a change in the code using the Code Editor and push it to the central GitHub repository.

Second, open Pipelines in the Azure DevOps. You should see the running pipeline with the corresponding commit id and the master branch. You can observe the different stages while the process is running.

Third, after the “Deploy to CF” phase is finished, your application should be running on the SAP BTP Dev subaccount.

Fourth, after the “Upload to CTMS” phase is completed, a new commit should show up in CTMS on the QA Node, which is waiting for the import.

Fifth, start the import in CTMS and wait for the success status. Also, you will get a notification in the configured channel when the import is started and finished.

When the import is finished, the application with the new changes should be running on the SAP BTP QA subaccount. At the same time in CTMS on the Prod node, the new commit should show up, waiting for its import.

This are the notifications you will receive from Alert Notification for staring and finishing the execution:

Automation Pilot will send alerts, whenever there is a status change of the execution, so we expect  two more alerts:

Note: The following notifications will be delivered only if you configured the Automation Pilot

The last step is to trigger the import into the Prod node and after it`s finished to check that the new application version is running in the SAP BTP Prod subaccount. Again, we expect to get 4 notifications when the second import is started.

Try it out on your own using the explained configurations or play around, so it can match your landscape specifics.

interesting post. It would be great to learn why you favor TMS over zero-down-time deployments such as blue-green or canary. Have a look here on my perspective.

Looking forward to the thought exchange.

thanks a lot for your immediate feedback 😊

I think we are talking about two different use cases here: when it comes to real blue-green deployment like you describe in your great blog post (where two versions of the application exist in one environment and can tested against each other), the approach described by Angel does not work because SAP Cloud Transport Management (currently) only supports a limited version of blue-green deployment. Here we immediately switch to the new version after deployment, thus minimizing the application downtime, but without the testing option.

However, CTMS has some features which might be required in other use cases. Just to name a few:

I think it is not so much a question of using blue-green deployment OR SAP Cloud Transport Management, but rather when to use what.

Therefore, it is great that Angel Tonchev  has shown that it is possible to combine Azure DevOps with CTMS and the other tools mentioned in his blog post.

you made some interesting points. A couple additional thoughts:

Orchestrating the release process through CF CLI from Jenkins, Azure DevOps or GitHub Actions gets you also a fine level of granularity to restrict access, auditing capabilities and a nice visual where your artifacts went (dev, staging, prod etc). I described deploying to prod only, because that is the cloud native way of things 😉 No one is keeping you from applying the process to staging approaches too.

The other bullet points are SAP opinionated and create tight coupling with SAP tooling. It is up to the customer to consider ease of use with SAP native software over vendor lock-in.

I can't really follow your argumentation about vendor lock-in. On the contrary I see this blog post as a very good example how to overcome vendor lock-in by combining tools from two different vendors using open APIs...

For the orchestration part yes. That is a good step forward to highlight different integration patterns.

My argument was about the dependency on CTMS and ChaRM being required to move artifacts in an consistent way. It could be addressed for instance with "shadow-releases", to avoid the need to move backend changes in sequence and synchronously with frontend. Especially because backend changes are very often much slower and less frequent. Any thoughts on that?