The following image shows the role of CDS analytical projection views in designing an analytical application. 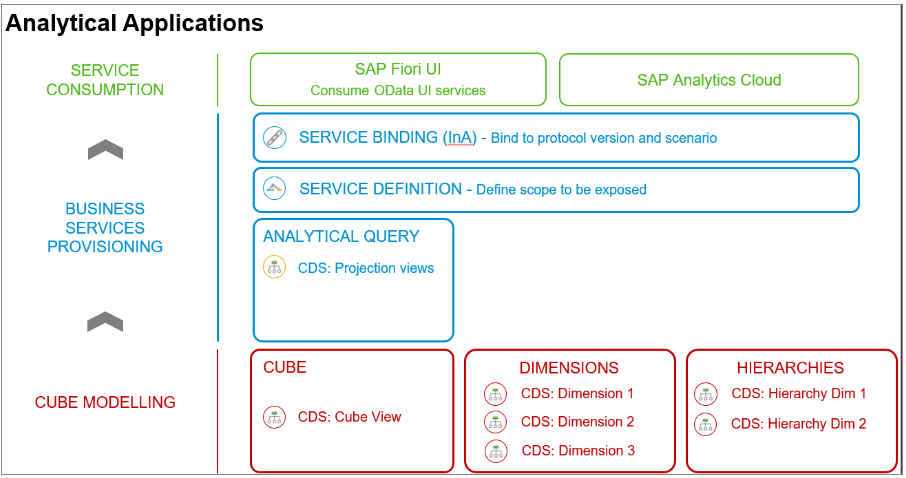 Before we look at the syntax of CDS analytical projection views, we need to understand the underlying analytical data model. Analytical models are recommended for reporting purposes when you need to aggregate data to expose results across different areas (for example by location, time, and product type). These models are conceived over Facts and Dimensions and these views contain the basic data used to conduct detailed analyses and derive business values.

Imagine as an example a sales report that provides results based on product category, date, and location. The Fact is the product itself and it holds values that we can measure (for example number of sales and total amount of sales). The filters by location, time, and type are the Dimensions and these dimensions can have Attributes or Texts attached (for example address and product description). Each dimension can also have a Hierarchy to map hierarchical structures such as region, country, state, county, and city. These hierarchies allow for roll-up and drill down of aggregated data, for example Toronto and Vancouver can be rolled up as Canada. When we connect all dimensions and hierarchies together, we have a Cube and consequently an analytical model ready for consumption. 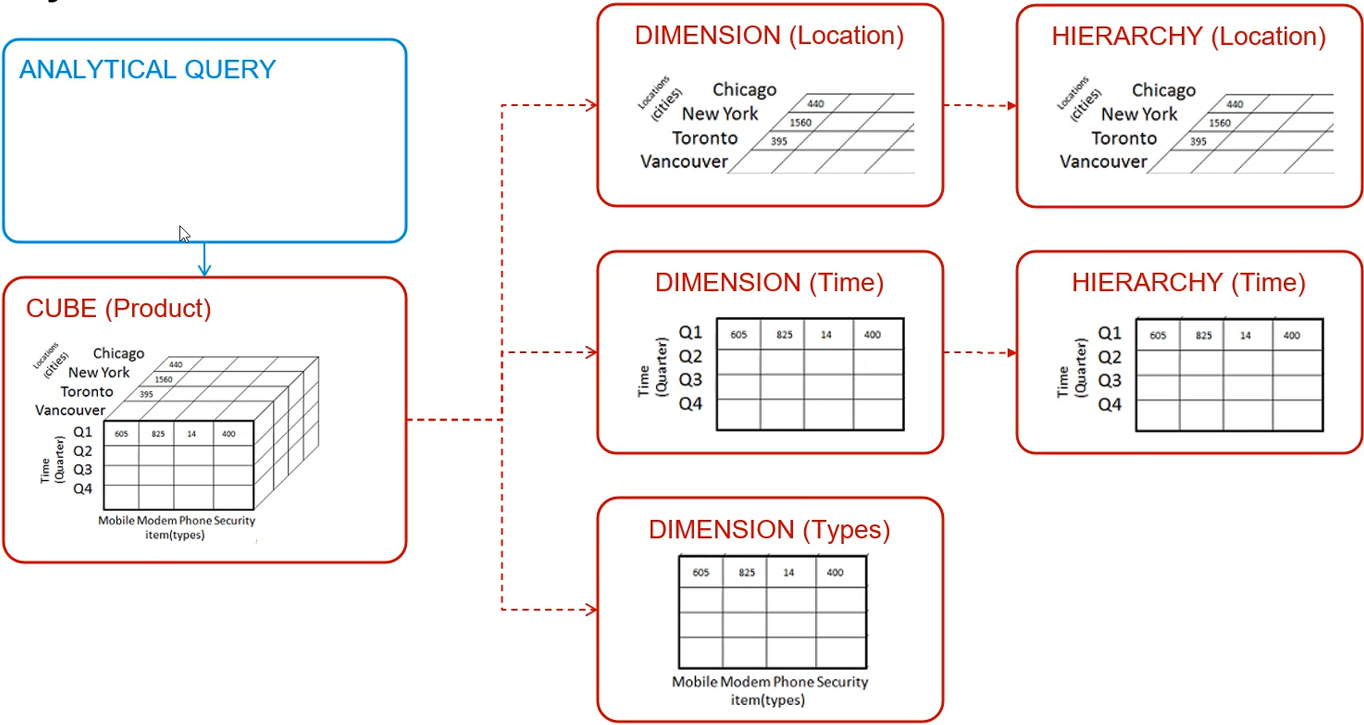 Analytical data models can be multi-dimensional and are often called Star schema.

The fields of an analytical cube view are Analytical Measures and Analytical Dimensions.

An Analytical Measure is a field of an analytical cube view that contains quantifiable data that can be calculated and aggregated, for example, the total price of all sales orders.  Measures can have a reference to a unit key or currency key.

An Analytical Dimension describes a characteristic of the view’s subject that can be used for grouping or filtering. For example, if a view describes a sales order, the following columns can be dimensions: customer, date, region. Dimensions can have a foreign key association to a dimension view.

The following blog post provides an example for how to design an analytical data model in ABAP CDS:  Create an analytical model based on ABAP CDS views | SAP Blogs.

Language dependencies are implemented using the keyword LOCALIZED. The annotation @ObjectModel.text.element: ‘<text_element>’ defines the relationship between identifier elements and the respective text. The text is automatically filtered to the current logon language.

An example for a language-dependent text element is provided in the listing above:

For more details on how to get language-dependent text in CDS projection views, see the development guide for the ABAP RESTful Application programming Model Getting Language-Dependent Text in Projection Views – SAP Help Portal.

Temporal dependencies in CDS analytical projection views are implemented in the following format:

1. Defining a restricted measure in an analytical projection view

A restricted measure allows you to further filter an analytical measure and limit the result set along a certain dimension. In the example above, the cube view defines the field amount_sum as an aggregation of all sales orders:

The restricted measure in the analytical projection view filters this measure to aggregate only sales orders with the lifecycle status set to a value between A and B.

A restricted measure must always have the following structure:

CASE
WHEN cds_cond
THEN result
END …

There must be exactly one WHEN branch; no ELSE branch is allowed.

result specified after THEN must be a field of the underlying cube view specified as an analytical measure, or a literal of a measure-like data type. A literal is allowed only if the element is annotated with AnalyticsDetails.query.onCharacteristicStructure: true and when this annotation is used, a literal is mandatory.

2. Defining a formula-related case expression in an analytical projection view

A formula-related case expression allows you to further process an analytical measure. It must always be structured as follows:

@Aggregation.default: #FORMULA
CASE
WHEN cds_cond
THEN result1
ELSE result2
END …

There must be exactly one WHEN branch, one THEN branch, and one ELSE branch. The annotation @Aggregation.default: #FORMULA is mandatory for formula-related case expressions.

The listing above shows an example for a formula- related case expression:

Calculated units and calculated quantities are now handled natively in ABAP Core Data Services. In an analytical projection view, a calculated unit must be specified using the keyword VIRTUAL, as shown in the example above. The example uses the DDIC data element DD_CDS_CALCULATED_UNIT for typing, but this is not mandatory:

A calculated quantity is always the result type of a calculation. The annotation @Aggregation.default: #FORMULA is mandatory, and a reference to a calculated unit field must be defined via the annotation @Semantics.quantity.unitOfMeasure.

Note: In an analytical projection view, the annotation @ObjectModel.virtualElementCalculatedBy, which connects the virtual element to an ABAP class that calculates a value at runtime, is not supported.

If you have questions, please feel free to leave a comment.