With Hybrid cloud and on-premises architecture, look after your internet bandwidth!

Hybrid architectures are quite common, companies are not moving to the cloud in with a single giant leap forward for instance.

To expose and on-premise database or application to another running in the SAP BTP cloud, an agent is installed inside the network as shown in this picture: 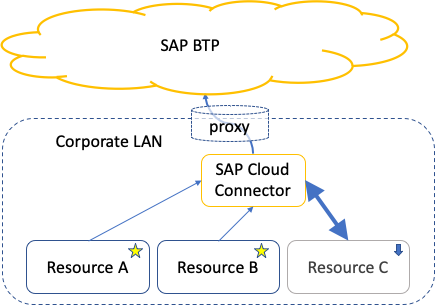 Hybrid Architecture with on prem and BTP

The picture mentions the Cloud Connector, but other situations require a Data Provisionning Agent, or a SAP Analytics Cloud Agent.

The bandwidth between the two data center can be 10-100 Mbit with 1% average utlization, but during peaks, traffic congestion affects all resources.

If resource A and B provide information to a customer portal hosted in BTP, then we should ensure that customer experience is’t slowed down because of heavy traffic caused by a the less important  resource C.

A corporate proxy might have quality of service features, but in this situation all traffic comes from the cloud connector and the proxy cannot distinguish traffic from A, B and C.

One quick fix is to define route priorities or bandwidth limits on the cloud connector. The cloud connector software doesn’t allow such configuration but all linux systems do! Operating system privileges are required to configure traffic rules.

The linux module is called “tc“, which stands for Traffic Control. For a network interface, a basic configuration is set, then traffic classes are defined with priorities or limits, and lastly classes are linked with IP addresses.

Setting a bandwidth limit means there is potentially unused capacity, but it is a solution with little configuration, only 4 lines that can be executed without interruption.

Why throttle the bandwidth?

There was a situation were a large table needed to be transferred and the time was longer than required. We were not certain if the bottleneck was the bandwidth, the database connection or some other resource. We applied various limits on the bandwidth and measured the transfer time.

We concluded that the time to transfer a table from an on-premise database over the data provisioning agent onto HANA Cloud decreases linearly when the bandwidth limit is raised (until the bandwidth is saturated): 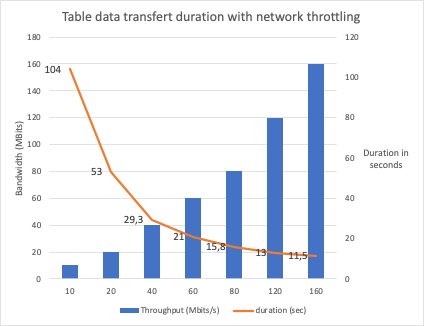 To conclude, even though bandwidth from a corporate network to a public cloud is almost always sufficient, it is important to keep an eye on it and mitigate the impacts of a network link saturation by applying limits or priority classes.