With this blog, I would like to respond to questions and comments to my blog about AIF licensing as well as other requests wrt SAP Application Interface (AIF) licensing that I receive from time to time. I have to admit that the topic of AIF licensing is not easy to grasp, and hence I try to shed some light on it.

First of all, when do I need to license AIF?

You need to license AIF if you need to create an own AIF interface in your own AIF namespace because you either like to carry out additional checks or mappings when posting your data or you like to use AIF to monitor your interface.

And in which cases can I use AIF without need of an additional AIF license?

Whenever SAP delivers an AIF interface in SAP-specific namespaces (those starting with a slash /), you can use the AIF interface without need of licensing AIF.

Do you have some examples?

Sure, SAP Central Finance (CFIN) heavily uses AIF to monitor the exchange of financial documents. A lot of AIF interfaces are actually shipped within CFIN. The usage of AIF in the context of the SAP delivered CFIN interfaces is already included in the CFIN license.

Also, SAP S/4HANA ships a couple of AIF interfaces, see below. For those, you do not need to license AIF.

Is AIF always free of charge within CFIN?

No. Only for the SAP delivered AIF interfaces within CFIN, an AIF license is not required. If you need to create own AIF interfaces to monitor the exchange of messages or data where SAP does not deliver an AIF interface, even in CFIN, you are charged.

Find out in About Error Handling which pre-delivered AIF content is shipped with Central Finance. 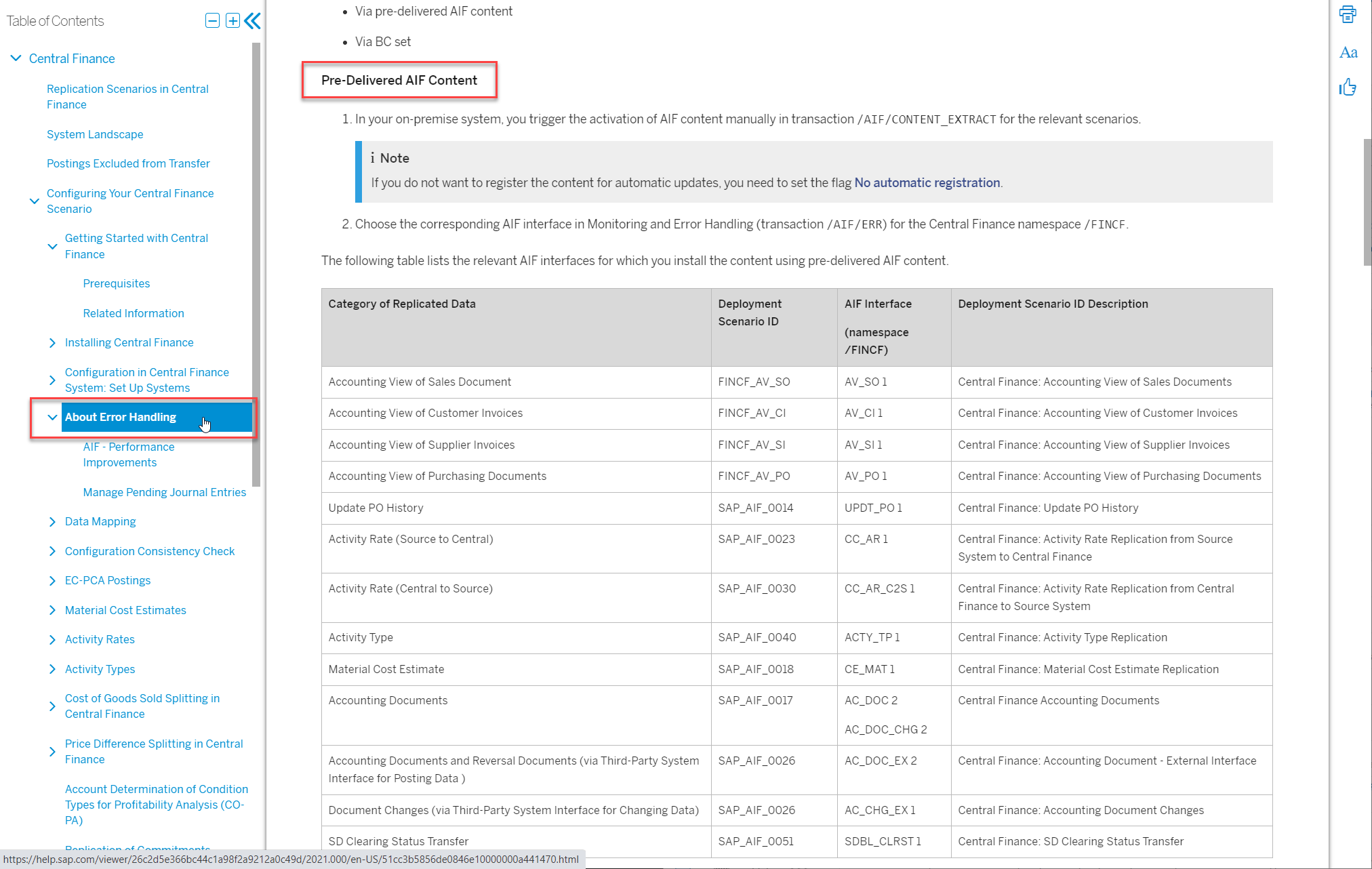 AIF is shipped with SAP S/4HANA. So, is it always free of charge?

No, although AIF is part of the Basis component of SAP S/4HANA, its usage is not necessarily included in the SAP S/4HANA license. As said, if you can use SAP delivered AIF interfaces, then no additional AIF license is required. Otherwise, if for your interface no standard AIF interface exists and you need to create an own interface in your own namespace, then you need to license AIF.

How can I find out if an interface/API in SAP S/4HANA delivers an AIF interface and hence won’t require an AIF license?

Unfortunately, there is no central place where this information can be gathered. Depending on your particular scenario, you need to check out the configuration guide / scenario documentation to find out whether an AIF interface is shipped or not.

Let me show you how to proceed.

Starting point is the SAP S/4HANA documentation on help.sap.com.

Navigate to Areas in SAP S/4HANA.

Let’s assume that you are looking for interfaces in the area of Sales. So, click on the Sales box in the figure, and then on Sales in the description. As an example, within the API section, I now navigate to the Sales Order – Replicate (A2A) API. If you scroll down to the Message Monitoring and Error Handling chapter, you find the information of how to extract the SAP delivered AIF interfaces. 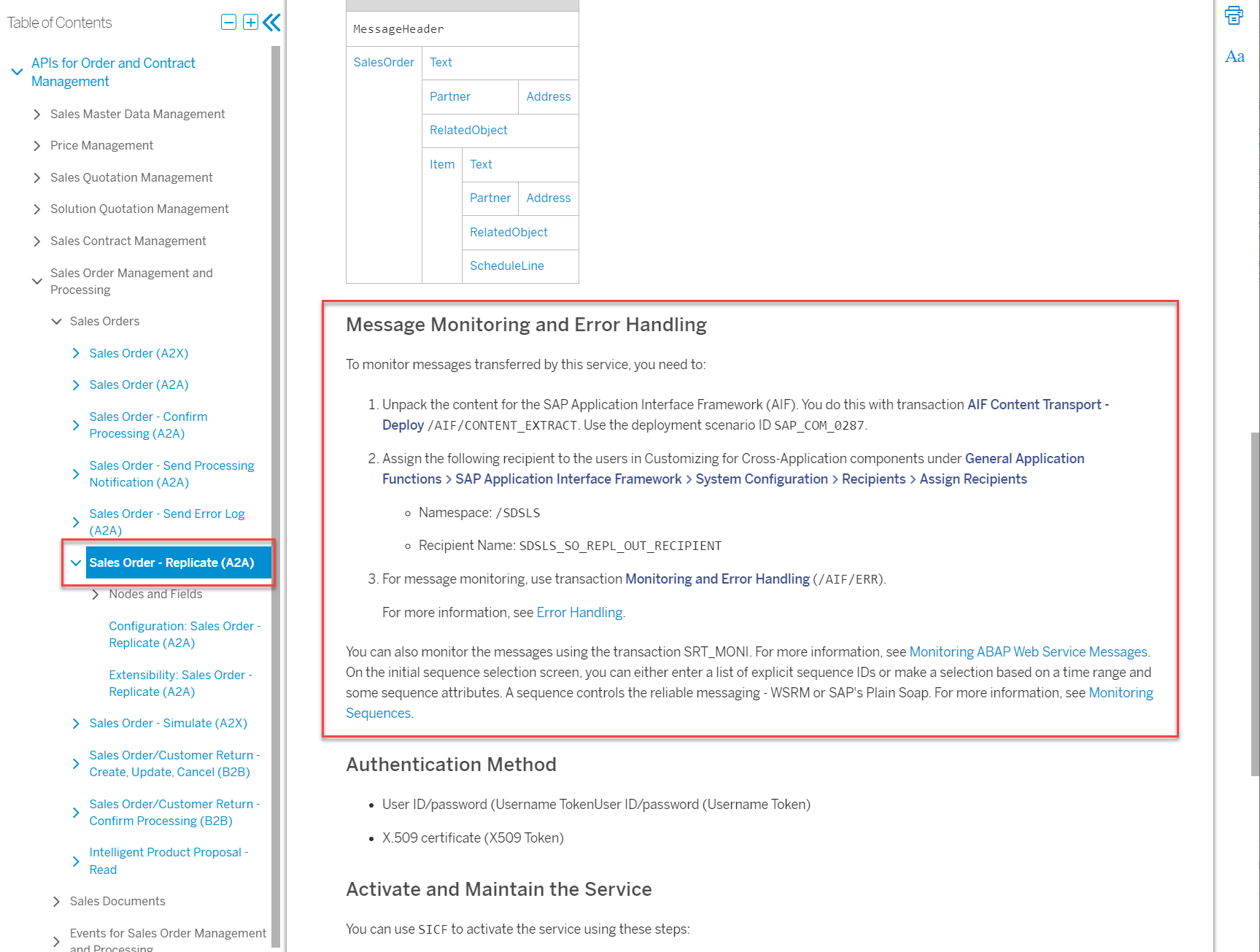 As you can see, the AIF interface is shipped within the namespace /SDSLS. Since this starts with a slash /, an AIF license to monitor this particular interface is not required.

Another example would be Inbound Delivery – Create (B2B) below the APIs for Delivery and Transportation. Here, the namespace is /LEEDI. 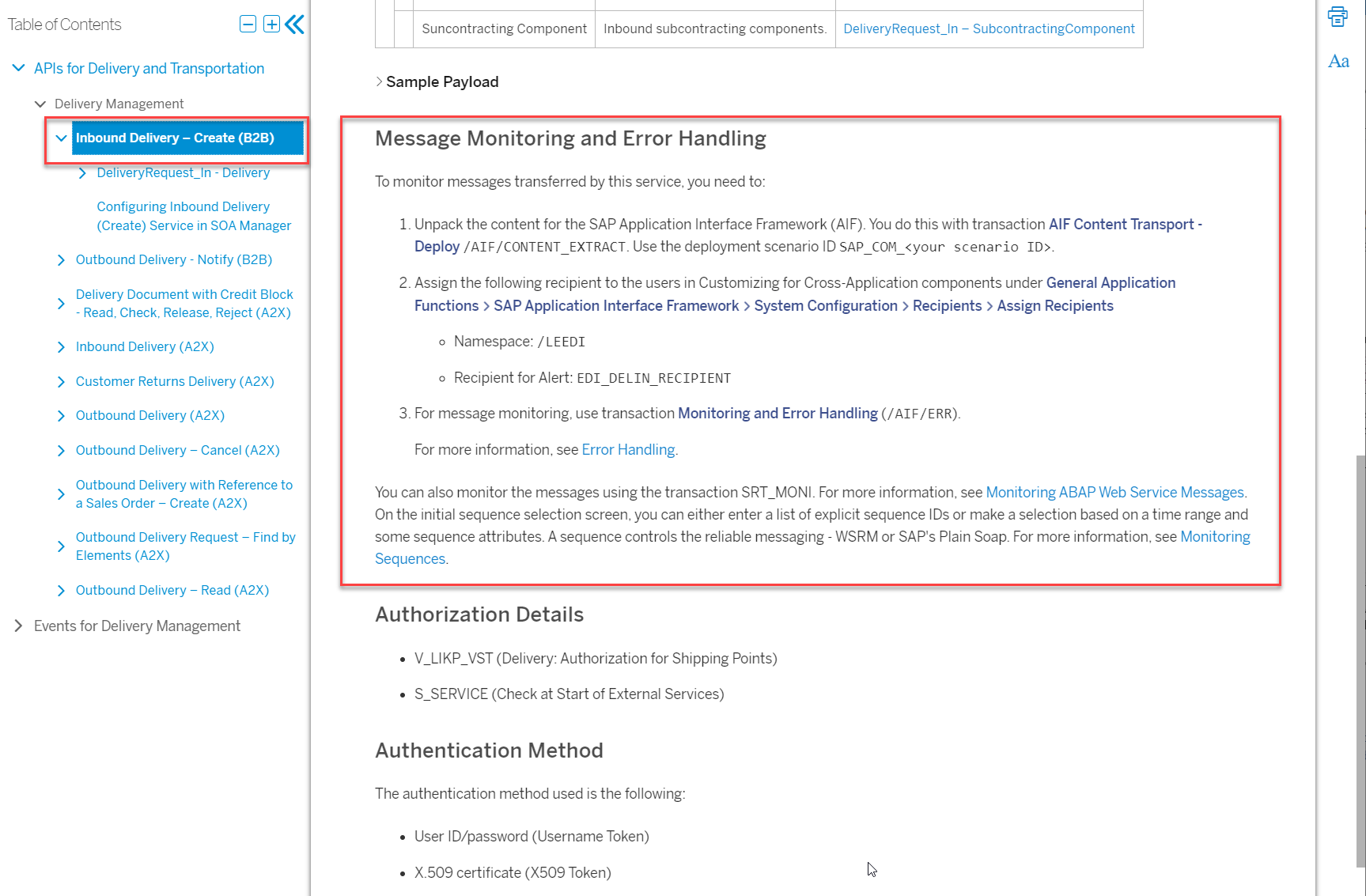 What if I use both SAP delivered and custom AIF interfaces?

The AIF license metric is actually based on number of transactions or messages. Only those messages count that belong to a custom AIF interface. If you have licensed a specific number of blocks of 1 Million AIF messages per year, the messages running through the SAP-delivered AIF interfaces won’t eat up from your contingent.

What about custom extensions?

if you have to extend the pre-delivered AIF interfaces with own checks, business logic, actions, there is the concept of variants, see the Interface Variants with AIF blog. First of all, you need to create an own AIF namespace, and then create the variant below your own AIF namespace. This is actually also supported without an AIF license. So, for extending a pre-delivered AIF interface, no AIF license is required.