In this blog post, I want to describe the scope and usage of the new generation 2 ABAP operator “Read Data from SAP System” as part of ABAP Integration starting with SAP Data Intelligence 3.2 and SAP Data Intelligence Cloud 2110 . To demonstrate the functionality of the generation 2 operator, I will create a sample graph that is  based on a real-world example that will be published in a separate blog post later.

*Minimum DMIS 2011 SP17 / DMIS 2018 SP02 depending on NetWeaver release, but it is highly recommended to use latest SP-level.
**Considering the SLT version dependency in the SLT installation guide: Link

The main scope of Generation 1 ABAP Integration looks as follows:

Overview of ABAP Integration with generation 2 in SAP Data Intelligence

In contrast, the figure below describes the current scope of the generation 2 “Read Data from SAP System” operator: It lists the systems that can be integrated with this operator and provides a summary of the high-level prerequisites in terms of minimum versions of the connected SAP ABAP source systems that I will further describe in the next paragraph below.

Detailed view on requirements for SAP ABAP systems to use generation 2 Operator:

Out of these SAP Notes, we can derive the following prerequisites for using generation 2:

Note: Please always check the general SAP Release Note for each system as mentioned in the previous paragraph to learn about all latest SAP Notes that might be required in addition.

Use Case: Extracting data out of CDS views with Generation 2 “Read Data from SAP System”

For extracting CDS Views with the new generation 2 operator, the CDS Views need to be extraction enabled as well as enabled for change data capturing via the respective analytics annotations similar to the Generation 1 CDS Reader operator.

If you plan to use an SAP S/4HANA system (on-premise), you can not only use standard CDS Views that are extraction enabled, but you can also create custom CDS Views with the required analytics annotations and consume them with this operator as well. More information about the required analytics annotations is available in the following documentation and blog posts: https://help.sap.com/viewer/3a65df0ce7cd40d3a61225b7d3c86703/Cloud/en-US/55b2a17f987744cba62903e97dd99aae.html & the following block posts from Simon Kranig and Martin Boeckling : https://blogs.sap.com/2019/12/16/cds-based-data-extraction-part-ii-delta-handling/ & https://blogs.sap.com/2021/01/21/abap-cds-replication-in-data-intelligence/  .

In addition, you may also check the latest SAP Note that includes the necessary security settings including roles & authorizations for the generation 2 operator: 3100673 .

Use Case: Extracting data out of tables with generation 2 “Read Data from SAP System”

If you want to perform table-based extraction, there are generally two different ways of extracting data similar to generation 1 operators leveraging SLT functionality via the DMIS add-on:

The main prerequisite on the source SAP system is the creation of the SLT configuration. When setting up an SLT configuration, you need to specify a newly introduced target system called “SAP Data Intelligence (Generation 2 Operators)” in order to consume tables in the generation 2 operator:

This new target system or target scenario is available in addition to the existing scenario  “SAP Data Intelligence“ , which can still be used with the generation 1 operators.

The below figure provides a more granular view on which kind of data sets (CDS View or table) can be extracted from different SAP systems via direct ingestion or via dedicated SLT server in case of table-based extraction to SAP Data Intelligence using the Generation 2 operator Read Data from SAP System:

As already briefly mentioned in the footnote of some diagrams above, if you use a dedicated SLT server it is important that you consider the SLT version dependency between the DMIS version of the connected SAP source system and the dedicated SLT server. More information can be found in the SLT installation guide here:

Now we want to take a closer look on the generation 2 operator Read Data from SAP System by describing the main functionality as well as necessary configuration parameters. 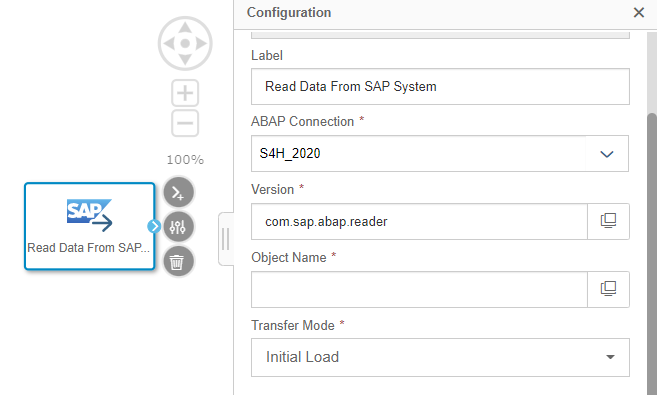 The connection created in the SAP Data Intelligence Connection Management (using connection type ABAP) against your SAP source system that meets the necessary prerequisites mentioned in the beginning of this blog post.

Version – Browsing of operator in the source SAP system

Similar to the generation 1 operators like SLT Connector, CDS Reader, and ODP Reader, the generation 2 operator is technically running in the connected SAP source system as part of the ABAP Pipeline Engine (APE). The APE provides the technical foundation for connecting your SAP system with SAP Data Intelligence. This means that the operator in SAP Data Intelligence is acting like a shell, which is pointing to the actual operator that is located in the SAP source system.

Before moving on to the sample scenario, I would like to briefly describe two aspects that may be of interest to users who have worked   with generation 1 operators:

First, in contrast to the generation 1 operators, the generation 2 operator currently does not allow for customization of the package size / records per roundtrip. Instead,  it uses a default value of ~ 10 Mb (depending on the individual source data set, there may be differences in the actual size).

Second, it is no longer necessary f or an SAP Data Intelligence user to specify a Subscription ID, as this feature has been replaced with an optimized one that is now part of the snapshot feature in generation 2:  When a user starts a graph with snapshots using the generation 2 operator “Read Data from SAP System”, the system automatically takes care of the subscription-related aspects in the background. We will see later what this looks like in an SAP Data Intelligence graph based on a sample scenario.

Now that’s it for Part 1 of my blog series. I hope I could give you some useful information about the overview of the topic of ABAP integration with SAP Data Intelligence using generation 2 operators.

In part 2 of this blog series, I will show you a concrete example scenario to better illustrate how this could be realized in generation 1 and generation 2, including some of the new features in generation 2, such as the pipeline resiliency feature.

Please feel free to add your feedback and question in the comments section of this blog.

Daniel, I appreciate the blog and explanations behind each of the scenarios. Very helpful!

One observation with your blog and many others on this topic is that the ODP_SAPI Datasource scenarios are never discussed. It's either SLT Tables or straight to ABAP CDS Views for the different ways to replicate data out of an SAP Source System. Are ODP_SAPI Datasources still a recommended scenario to replicate data from S/4 into Data Intelligence using the ABAP Reader operator?

ODP integration is definitively also an important topic, especially in the context of SAP Business Warehouse but also in SAP Business Suite systems via SAPI. Please check our roadmap explorer for SAP Data Intelligence regarding any news in this area.

Regarding the availability of ODP_SAPI or general ODP integration in SAP S/4HANA I can't directly comment on this, but you can find some information in the knowledge base about the usage of extractors in SAP S/4HANA.