I was recently posed with a problem that needed a new solution for our planned S4 migration in a few weeks.  How to get the configuration domain text data to an external database to retain some existing reporting capabilities?  I’m betting that a lot of folks work in heterogenous landscapes and sometimes it requires getting creative with how to tackle a problem.  I have seen a couple of approaches in the past and have to admit that I’m not a fan of either, but I’ll let you decide for yourself which one is least preferred.  First example – two synchronous ABAP Proxies of megalith proportions statically defined to return data on several dozen configuration domains based on daily or weekly frequency.  The second – several recurring job instances throughout the day (four or five maybe) that extract the data whenever change pointers are detected on dependent business objects, and saved as files on the application server, which requires some other process to fetch the data and load it.  Is a many times daily, daily, or weekly cadence appropriate given the relatively infrequency that configuration tables are updated in a productive environment?

What if there were an event that could push the data for a pit stop into Integration Suite for some transformation before reaching its final destination in the external database?  I spent a few hours pondering the question and came up with the following: Implement BADI CTS_IMPORT_FEEDBACK along with BRF+ to evaluate customizing requests and push table names to Integration Suite.  Start with an iterating splitter, and sprinkle a little graphical mapping, content enricher via OData, and XSL transform and arrive at XML that can be processed by the JDBC adapter to initiate stored procedures for UPSERT.  What follows is the culmination of a day and a half of build, learning, and experimentation with a couple of gotchas along the way.

The original intent was to execute the entirety of ABAP within this BADI method, but after I had completed the full service layer in Integration Suite and worked backward into this method, I discovered that it executes in client 000, and received a ST22 dump when the BRF+ application could not execute.  The BRF+ code was pushed into the RFC function module.  Consequently, after working in SAP software for 14 years and having never logged in to client 000, I have for the first time (SM59 destination), and doubtful I ever would again.  You may also wonder why I wouldn’t simply read keys and use a combination of RTTS and web services to push the data to Integration Suite.  Beyond avoiding the megalith mentioned above, dealing with situations where some columns are ignored for certain tables, and determining appropriate structure, it certainly wouldn’t be blog worthy and you wouldn’t be reading this!  After following the remaining steps I think it will be clear why I decided to go with the chosen route.

Originally, this RFC was only intended to be a shell for my enterprise service consumer proxy generation (we do not have an ESR), but after experiencing the client 000 problem it became a suitable surrogate to execute the BRF+ application in the appropriate client, as well as the ABAP proxy.

I find BRF+ to be an often underutilized gem in the system.   If I have a simple question for the system to answer, pass the necessary input and let it determine the outcome.  The true beauty is that I can add or remove a table for this scenario without writing a single line of ABAP!! 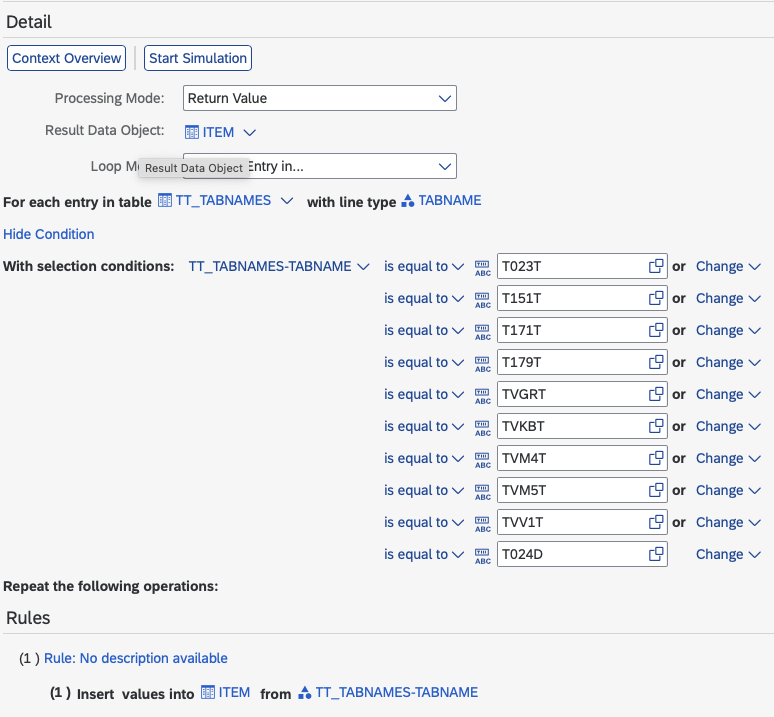 The first two steps of the flow are setup steps to determine the backend OData host and split the incoming message by each table.  The last three steps will be presented in more detail below.

This mapping serves the purpose of mapping a backend table name into four corresponding bits of data… stored procedure, OData service name, resource, and query using a combination of the fixValues function and a couple of simple Groovy scripts.  Folks could be wondering why not use value mapping, but I feel like that is a lot of overkill to maintain several input fields instead of simple 1:1 mappings with fixValues.  Also, note the use of the query parameter is used because for one table we don’t want the full field list.  If we use $select query options for one table in the OData adapter we must maintain it for all (Tried the empty string and it did not work).  This leaves me with a choice dilemma:

Option 1 – Add a query parameter, which is more stuff to maintain in the graphical mapping

Since I’d rather not select fields and transport extra data over the network that is of no consequence, I went with the first option. 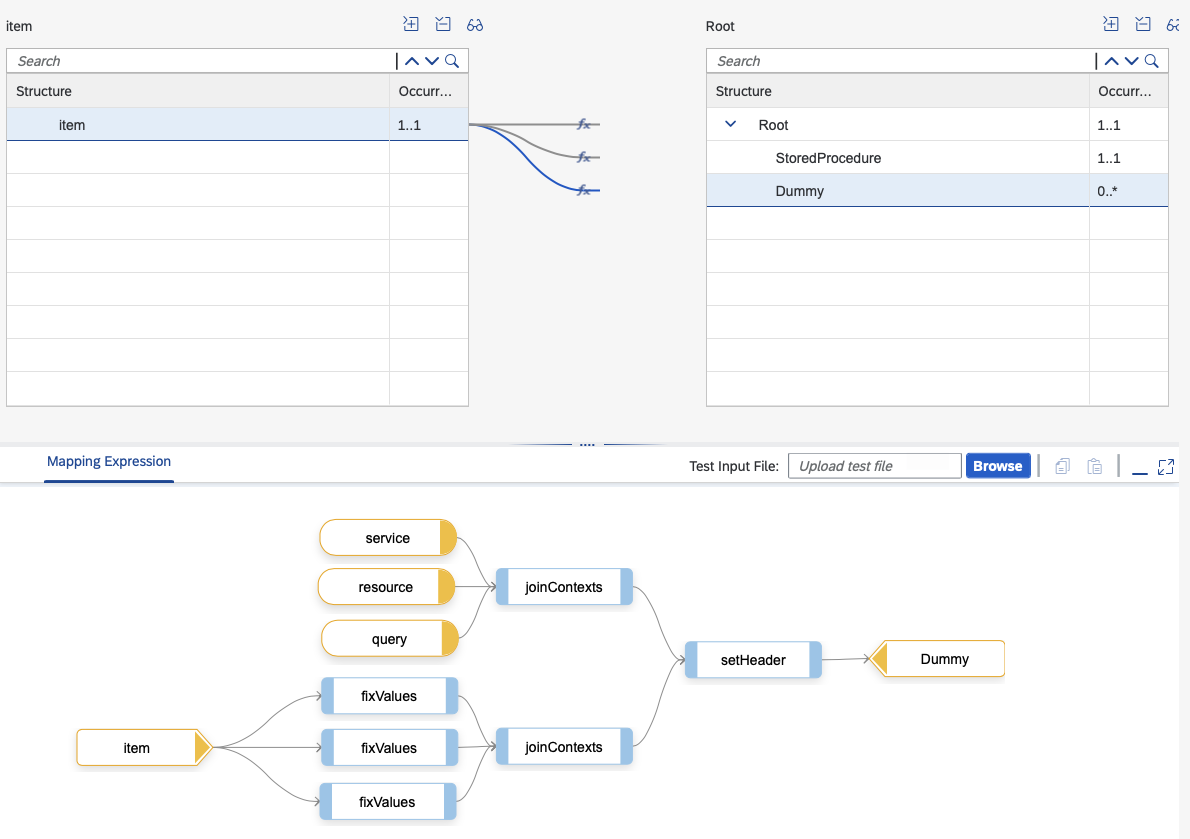 The setHeader function should be self explanatory, but the joinContexts function is to establish a queue like some of the older PI/PO functions.  I could not find an equivalent in Integration Suite, so I constructed my own (Feel free to share if there is some out of the box option that I could not find).

The first image includes basic host and service metadata that is handled in the first step, and the graphical mapping step.  I was unsure if externalized parameters and headers would be concatenated like two headers, so I went with this option.  If externalized parameters do work in this way, then I could eliminate the first step in the flow.  The second image shows the processing tab with the other metadata required for the OData service call.  You may be wondering at this point… what about V2 vs. V4?  For the 10 tables I need to push, I was able to identify 2 services that are both V2.  If I have to cross that bridge in the future, I can manage with the addition of a version metadata field in the graphical mapping and an appropriate routing step. 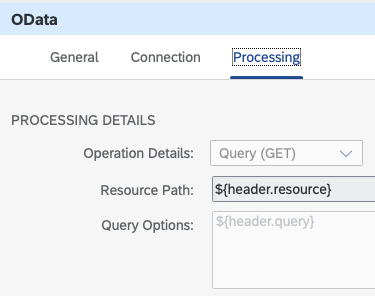 The following XML is the result after the content enricher via OData using the combine algorithm.  The nice feature/outcome being that I did not have to statically define any table structures or field types anywhere in the solution.

For the sake of brevity, I have included a truncated XSL transform that only includes 3 tables despite my requirement being 10 tables.  If you happen to be a savvy XSL veteran, and find my work to be rudimentary, keep in mind that this is my first XSL transform after spending 30 minutes reading and learning on W3Schools.  I did implement the XSL transform in such a way that empty string key records would be removed from the stream.

Disclaimer: This part has not actually been tested, but instead the above XML was dumped to an FTP site for extraction during unit testing.

Once the DB admins are able to create the necessary stored procedures I will include an editorial update.  In the past, I have used the JDBC adapter in PI/PO where we can do bulk inserts, but I did stumble upon some blog/answer posts, and an OSS note indicating that bulk inserts are not supported in Integration Suite unless using a splitter in batch mode.  I referred to the following blog on the topic of using stored procedures, which I had used in the past in PI/PO – Stored procedure as XML Type  I opted not to split an already split message, along with the fact that this approach fares far better from a performance perspective.

After reaching a point where I can successfully unit test the full solution outside of of the JDBC handling, I’m pleased with the outcome.  For future’s sake, if I need to add a new table in the future the process is quite simple:

Hope folks can get something useful out of this… enjoy!