This feature is available with January 2022 release and with com.sap.cloud.adk.build.archive plugin 1.38.0 or above.

If you are not familiar with ADK and how to develop a custom adapter, you can have a look at this article. This blog assumes that you already developed a custom adapter project. We are going to look at how to version this adapter.

Before we begin, let us first understand what do we mean by versioning a custom adapter. CPI runtime does not support multiple runtime of a component. Which means, you cannot deploy two adapters at the same time. So, when we say adapter versioning, we refer to the component metadata version. You can create multiple versions of the component metadata and hence support multiple UI at the same time. The advantage is that, the existing integration scenarios will continue to have the older UI and the newer integration scenarios can get the newer UI.

It is the responsibility of the adapter developer to maintain the backward compatibility of the runtime in order to support the existing integration scenarios.

So, it is important to follow certain versioning rules.

There are three different components in a version string. 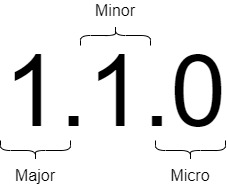 In CPI, we support only minor and micro version increments. Following are the rules to be followed while incrementing a version.

How to do Versioning

Ok, lets put the above theory into practice and see how we can version a custom adapter. For this, I am going to use the sample adapter that is getting generated when we create a new adapter project.

Following is how the UI looks like when I consume the sample greetings adapter in an integration flow.

Let’s say, I would like to update the label ‘Greetings Message’ to something like ‘Greet Here’. Since, we are not adding any new feature to our adapter, I am going with the micro version update (from 1.0.0 to 1.0.1).

I will open the metadata.xml in adapter project and navigate to AttributeMetadata section. I will update the label to ‘Greet Here’ as shown below.

Next step is to update the micro version of the metadata to 1.0.1. This needs to be done both at the component and variant level as shown below.

Finally, we also need to update the version in config.adk as shown below. 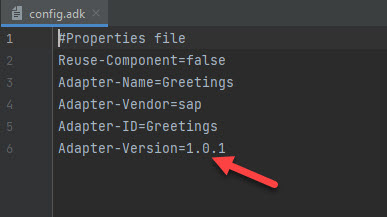 That’s all we need to do for the micro version increment. Let’s build the esa and import the same in web-ui. We can see that the label in the existing scenario is changed to the updated value.

If you see the execution of the existing scenario, following is the message we see in exchange. I have enabled tracing to view the output.

In order to introduce a new field, first we need to modify the metadata. Since, we are introducing a new feature, we have to introduce a minor version for this (From 1.0.1 to 1.1.0).

Let’s copy our metadata.xml to a new file named ‘metadataV1.xml’. We should not have more than one variant in a versioned file. Hence, I am retaining only the receiver variant and removing the sender variant from the new file.

Important note to remember: We should not have more than one variant in a versioned metadata file. If you want to introduce version to both sender and receiver variants, you have to create separate metadata files for each of these variants.

Introduce the new field called ‘formatter’ in the new metadata file and provide the version (component and variant levels) as 1.1.0.

Let’s also increment the version in config.adk. We need to increment it to 1.1.0. 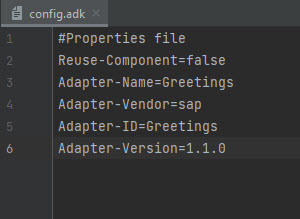 Now, this can be consumed in our producer to format our output. We always should remember to make the runtime backward compatible. Let’s add the below code at the end of process method in GreetingsProducer.java before we set the exchange body.

The adapter can now be built and let’s import it onto web-UI. We also need to deploy the adapter.

When we open the existing scenario, we can notice that it still has the older UI. This is because, we have increased the minor version. Existing scenarios are not affected.

So, we will create a new scenario and consume the adapter. we can now notice the new field ‘Formatter’.

Once we run the scenario, trace will show the new formatted output as below.

In summary, we have seen what are the different versioning rules to be followed. Also we have incremented both micro and minor version of our sample adapter.