What is Behavior Driven Development?

First off, ‘Behavior Driven Development is such a mouthful, I shall henceforth refer to it as BDD.

BDD is an evolution and refinement of Test Driven Development (TDD). In TDD, software unit tests are written that test a specific aspect of a program. The typical process of TDD is:

TDD focuses on code functionality at a fairly technical level; as such, it requires a certain amount of technical familiarity to understand what the tests are actually doing.

BDD on the other hand is more concerned with describing features of the software in a way that can be understood by people with different skill sets, such as business experts, testers, developers etc. The way that this is done is by standardizing on a natural language description of how the software is behaving (by natural language I mean any language that has evolved naturally in humans). The advantages of this are:

My work with CPI has meant that I have had to invest time and effort in working with Groovy, somehow that led me to investigating test tools; Spock is a BDD framework written in Groovy, and has some very nice features that take advantage of the Groovy language that I will subsequently describe.

Firstly, each test method can be written as natural language text in quotes, for example:

In Spock terminology, this is known as a feature method, which describes a property of the system under specification. In this way, you can specify exactly the purpose of the test in a way that is broadly understandable.

Blocks assist in organising these phases

So without explaining any more, see if this makes intuitive sense to you:

In the above example, given, when and then are examples of blocks: ‘given’ is equivalent to a setup method, ‘when’ contains the stimulus, and ‘then’ the expected response. These are not the only blocks, but are most commonly used.

Thirdly, Spock makes parametric testing a breeze and so much easier that with JUnit for example. If one wishes to repeat the same test using different values of input data and expected response, one can use the ‘where’ block with a number of different data input methods. One of the easiest is to use data tables, which contain parameter names in the header and a row for each test case and expected result:

(The ‘||’ separates input fields from output. In this case, because we have no expected output because in this simple test we are testing for non-null output, Spock requires the ‘_’ to be placed in the output field).

In this case, Spock will iterate through each row of the table, replacing the variables in the column headers with the values specified in the test code.

When such a Feature method is run, the following output is produced in my IDE: 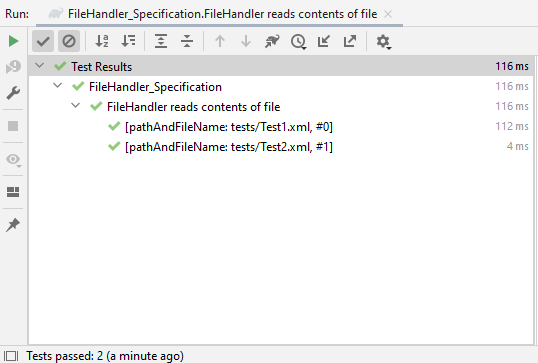 Hopefully, this has given you some idea of some of the power and elegance of Spock.

Before we can get to testing our Transforms with Spock, we need to do some refactoring. The motivation for this is:

Let’s consider a very simple integration flow, in which we have an XSL Transform followed by a Message Mapping:

Notice that there are three steps to the mapping: a Content Modifier that sets parameters used in the XSL mapping, an XSL Transform, and a Message Mapping. Other steps are superfluous from the point of view of message transformation, and all three steps need to be available to test as a transformational unit.

These are the refactoring steps:

Those are the three steps mentioned above in this example.

Step 2: Isolate the transformation actions into a Local Integration Process

Here, we take those 3 steps and encapsulate them in their own Local Integration process:

Connect the http adapter to its own process, and call the Transform Local Integration Process from it:

Overall, the refactored integration flow now looks like this:

Having refactored the process:

Setting up your IDE for use with Spock

I won’t repeat what has already been published in some excellent articles, so I refer you to these:

Here is what I have done; firstly, I have written a couple of very simple helper classes to make the code a little cleaner.

The FileHandler.groovy class uses the utility of Groovy to extract the contents of a file:

The HTTPConnectionHandler is a wrapper around the Java URL class and uses the Apache Commons IOUtils class to make things succinct:

Having defined these, they are used in our Spock Test Class.

Here is how I did it in IntelliJ IDEA:

First, I set up the ‘given‘ block:

where urlAddress is the url of the endpoint of the HTTP adapter used in your integration flow and user and password are the clientid and client secret taken from a credential of the Process Integration Runtime: 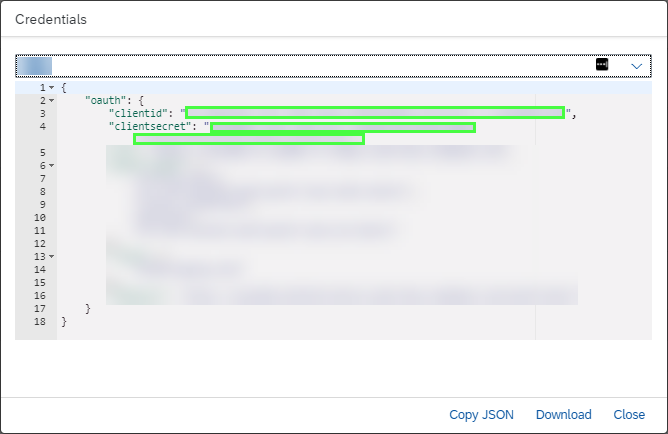 This code creates a FileHandler, reads the contents of the file passed to it, then sets that as the body of the HTTP POST call that will be made into the iFlow. Note that we haven’t specified yet what the parameter pathAndFileName is set to. This is important.

Next, the ‘when‘ stimulus block is set up:

All I do here is get the HTTP Response back from the HTTP call to the Integration Flow, then create a new Groovy XmlSlurper instance to handle querying the content of the response.

Next, the ‘then‘ block. These are the actual tests you want to do on the response to make sure the transform did what you expected:

The XmlSlurper class uses a syntax similar to XPath when specifying a path to an XML element; this is well documented online.

Note that each line is an assertion written in a concise way that does not require the use of the ‘assert’ keyword as in JUnit tests, making the tests easier to read. Also note that there are 3 variables on the right side of the ‘==’ operators which also haven’t been defined yet.

Finally the ‘where‘ block is added:

This is one of the really nice features of Spock testing. This is an example of a Datatable, and is how parameterized testing is performed. Note that:

Each row is a test; the table is iterated through a line at a time, and the ‘given‘, ‘when‘ and ‘then‘ blocks are executed for each row of the table.

So this is effectively what is happening with our tests: 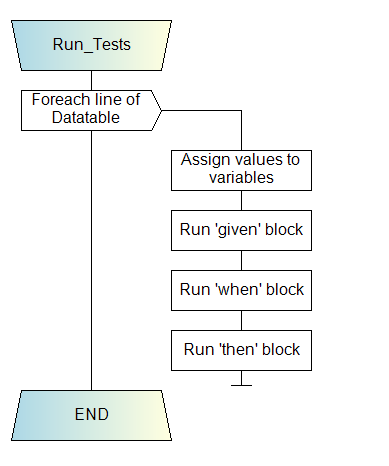 When I run this test, if all goes well, this is what I see:

Nice; each test has its own line along with the parameters used.

What if one of the tests fails? How much useful information do I get? Let’s force a failure by changing the second line of the Datatable:

Now, when this is run we get the following error message:

Notice that we are told what test failed, and we can see exactly where the falsehood that caused the test to fail occurred. This is very useful in cases of complex logic.

So how easy is it to write a new test? Really easy! You can add new test cases or add new tests to existing test cases just by extending the datatable.

To do this, just add a new line to the Datatable:

Now when you re-run the tests, the new line is automatically evaluated:

To do this, add a new parameter to the database (in this case gewei) and include it in the ‘then’ block as another check:

Now, when this is run, the new parameter is picked up and the check performed:

One thing I haven’t touched on is the issue with using a Mock adapter to replace calls to external systems. I have been thinking that a way to do this would be to extend the standard adapters to make them mockable. As far as I can tell, CPI Adapters are based on OSGi,  which, to my understanding is open source and hence the source code should be available, at least in theory. Unfortunately, I have posted a question regarding this in the SAP Community, but have had no clarification, so I’m a bit stuck on this.

Thank you for taking the time to read this! I hope it was useful and easy to understand.

I’d like to thank my colleague Jukka Saralehto for mulling this idea over with me and providing the final missing piece to the puzzle; to my ex-colleague Antti Kurkinen for kindly enduring my endless inane questions, and to Eng Swee Yeoh’s for his excellent and inspiring articles! Finally, to all of you for being part of the community 🙂

It's always a joy to see how others (like yourself) are building upon the groundwork that Vadim Klimov and myself have laid.

I just wanted to point out that my blog post that you referenced were from an early adventure with Spock using Eclipse, and since then there is another post showing the more-or-less equivalent for IntelliJ IDEA (which is my current favourite for Groovy development) BUT the most comprehensive coverage would be in our E-Bite as we deal with not just the IDE setup but identifying and using the right versions of Java, Groovy and Spock to ensure the scripts that are developed are compatible with Cloud Integration.

Back to your point, I love Spock, and whenever I develop any Groovy script that has significant logic, there is always an accompanying Spock specification.

Your idea of using a separate Integration Process to enable testing of a chain of steps is interesting - that's great out-of-the-box thinking 🙂 Another approach that I use for testing a chain of steps is using the Simulation Testing functionality that I have built into FlashPipe. There are a few classes provided by FlashPipe that helps to ease testing such chains with Spock. However, this is currently only available in Neo, and hopefully this will change when SAP releases a public API for execution of simulations (expected later this year).

Keep up the good work, and I'd love to see more interesting content coming from you 🙂

Thank you for your suggestions 🙂 I will be looking at FlashPipe as soon as time permits - it looks very useful!

I did indeed run into some problems installing Spock on IntelliJ IDEA; took me a couple of evenings to figure out, so sounds like your E-Bite would be worth the investment.

As an aside, would you happen to know the status of the standard CPI adapters? Are they licensed under open source? The reason I ask is as alluded to in my blog post - I'd like to investigate the possibility of extending them to build in mock functionality. However, I can't do that if I cannot obtain the source code.

CPI adapters are not under an open source license. Even though CPI uses open source products (Camel, Karaf), these are under the Apache License 2.0 which is a permissive license that allows SAP to redistribute it under different terms and without source code.

Even if you can get your hands on the source code, getting your changes/extension back into the CPI tenant would not be straightforward. SAP wouldn't like you hacking into their system and changing it, and they may even void the support.

Thanks for the clarification! Scratch that idea then...I'll try to think of something else.