I believe there is a bit of a boomerang effect when talking about development.   The titles – well I don’t really care about them.  <Gasp>  Just doing my job well.   (Project Manager, Developer, ABAPer, Analyst, Jr/Sr 2010…   They all mean different things to different people.

I happen to love to learn new things.  I like to keep them in my back pocket.  Then when discussing a project, I have a lot of different “things” I draw from.  I know that I could develop this using xyz, it would work, and the benefits.  So it really gets me down when I have one of those months where I just can’t seem to get it.   And yes, I develop a block.   Kubernetes is my personal block right now.

So instead of thinking about all the reasons why I can’t possibly learn Kubernetes.   I started thinking – and of course stepped a way from it a bit.  I do in fact have regular project work.  It’s a bit of a balancing act.

My first real job was on an IBM System 36 using RPG and a command language.  We had to put code in certain places on the line and…   Well anyway, the best way to code was to write selects so that you pulled minimal data to the system.

Then along came a spider called ABAP.  We wanted to pull almost everything into internal tables.  We even ran SE30 to make sure we used more ABAP processing than database.  And we added foreign keys to get the data via a key.

This would be considered bad.   Too much database power being used.  Move it up to the application layer.

That blew our mind.   It seemed counter intuitive.   Why would we want to bring in TOO much data?  It just didn’t make sense.  But our programs ran better when we did.   Who were we to argue with results.  Don’t get be wrong, there were other factors.  We did use the table keys.  We did set up extra indices.  But for the most part the idea was to pull it all into your program.

Next came the tarantula called S/4 Hana.  Now we had to move down to the database.   Yes, database???!!!!   I Think, I Believe, yes, it was the database we were told not to program at this level.  Blew my mind?  Nope.  It all made sense again.   Send as little as possible to the program.  Yes, again there are other things I look for too.   Nothing solves all issues.  But let me tell you, my mind is not blown anymore.   YES!

So now like a “normal” program I am watching how many records are pulled from the database, trying to minimize while balancing….   Well you get it.  It’s what you do on a daily / hourly timeframe.

Now let’s look at configuration, development, process management, workflow, BPM, Odata, business knowledge, testing…   And everything else.   There is a lot more isn’t there?

Green screen programming = frontend, backend, interface, the whole thing!  The exception was EDI. No – gasp – internet. Dot printers.    Had to have more than one application.

Welcome the new world – Windows – SAP = frontend, backend programming, EDI, XI/PI, flat files For the most part the directive was to defend why it wouldn’t work in SAP prior to purchasing ANOTHER package.

Windows + Hana  + on-cloud = backend, frontend, cloud, EDI (less of this), flat files (rarely), APIs – we have a winner, MANY languages, open development.  Back to best of breed.

Well this doesn’t look like a boomerang.  Right?   Wrong.   Lets look at early programming – Machine language.  Very hard to learn.  Now we have so many different things to learn – and not enough time.  Back to VERY hard.   Can one person learn it all?  Uh…  Maybe?

What is my point in this blog that doesn’t seem to flow?   My point is although “change is constant”.  You have to pick what you want to learn, and when you get overwhelmed with this new thing or that new thing.   Take a deep breath.   Take a trip down memory lane.  “The more things change, the more they stay the same”.  And of course “Knowledge is power”.   So never stop learning, but don’t feel like it is too much or not enough.  “History always repeats itself”.  See all those sayings do have meaning.

My anxiety is dialed back.  I’m now also thinking about all the other things that I have learned.  So I KNOW I can do it.  It will take time, and actually using “the new thing” in a project.  But yes, I still have a block.  I just don’t feel like it is as big of a deal anymore.

What about you?  Any suggestions to stop your learning anxiety back?  Thing to “trick” your brain?  Are you able to give up the need to know everything that comes into the SAP realm? 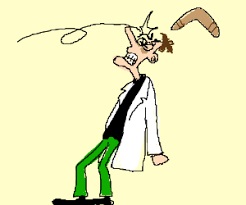 good topic. 🙂 I think there is always a lot to learn - from my perspective there is too much to be able to learn everything...if that makes sense. So I try to focus on the things which are relevant for me, my work, and also on things that I believe are to stay. There are so many new things coming from SAP...some are even not new, just got a different name...others are new but never make it to the "relevance" status...at the end - at least for me - each topic or feature has it own time...one day it isn't (yet) the time to learn about it and suddenly there is the day when it becomes relevant and I start digging into it.

Things I touched in the last 2 years are ADT, GitHub, abapGit...and currently, I am busy with gCTS. As we are facing a S/4HANA implementation project (not a conversion), there will come a lot of others soonish, for sure! CDS, the new data model in SD and MM, new output management / BRF+, to just name a few of the buzz words on my to-learn list!