In this three-part series I outline and demonstrate an approach to help newcomers get started more quickly with our tutorials, by describing and providing an environment with all the prerequisite tools installed ready to go. This is part one, where I describe the challenge and the base solution I’m going to go with.

See also the next posts in this three-part series:

I’m a big fan of learning-by-doing, in fact it’s in my regular reminder tweets about upcoming Hands-on SAP Dev live stream episodes, like this one: 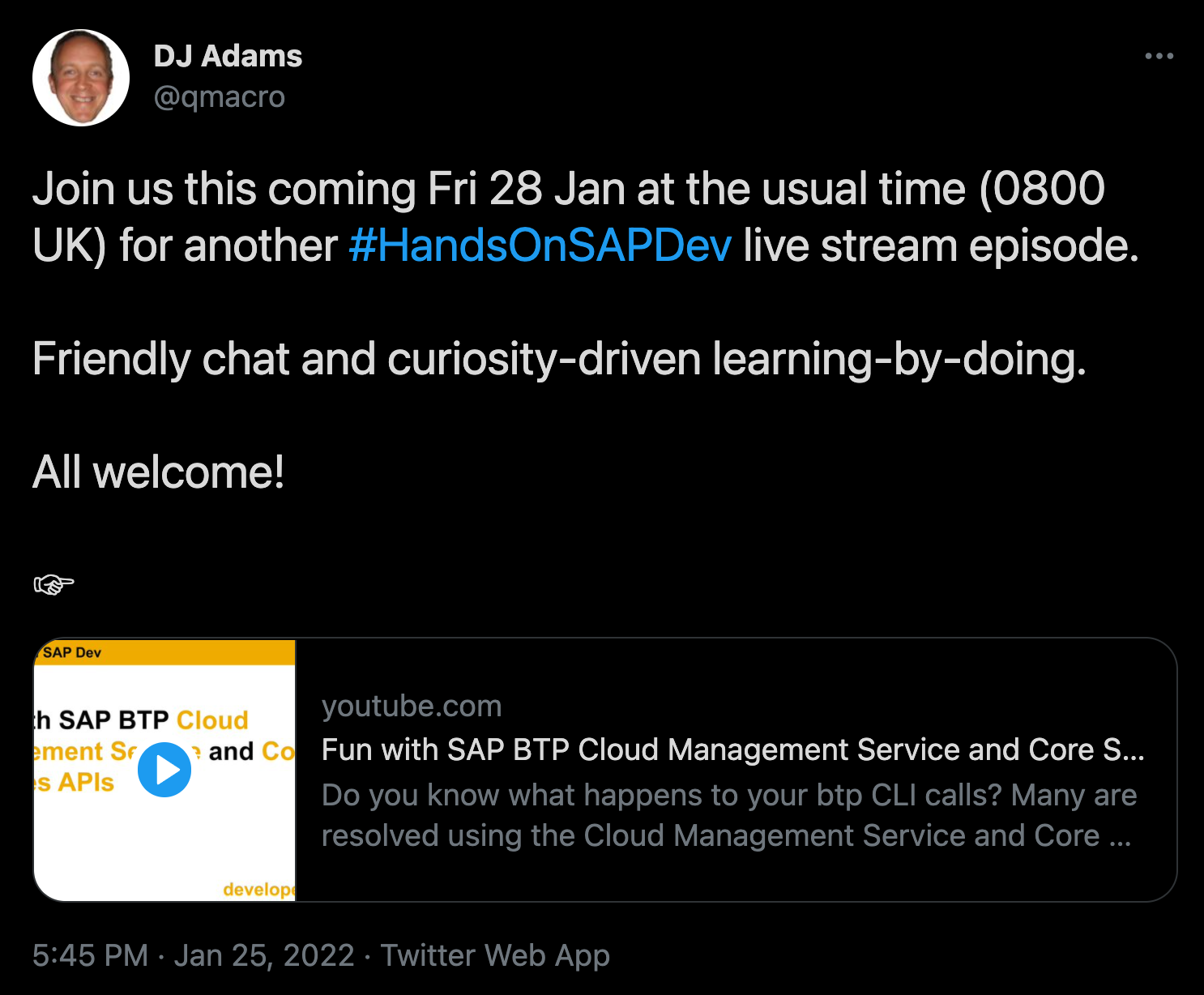 The challenge and a possible solution

But sometimes I want to fast forward through the prerequisites, and quickly get to the topic at hand, the actual subject matter of the tutorial I want to follow.

I’ve been experimenting over the past year with containers (as popularised by the Docker initiative). Containers are small, portable self-contained environments, similar to but much smaller and far more efficient (with far fewer resource requirements) than, say, a virtual machine. For a great intro to containers, you should check out Witalij Rudnicki ‘s series on Understanding Containers, see the Further Reading section at the end of this post.

Most of the time, including the time I spend with you in the Hands-on SAP Dev live streams, I live and work in the terminal. Not just any terminal, mind you – a terminal inside a container. It’s a container that I create from an image that I’ve defined over the months, that’s based on Debian and contains all the tools I need to work comfortably and efficiently. 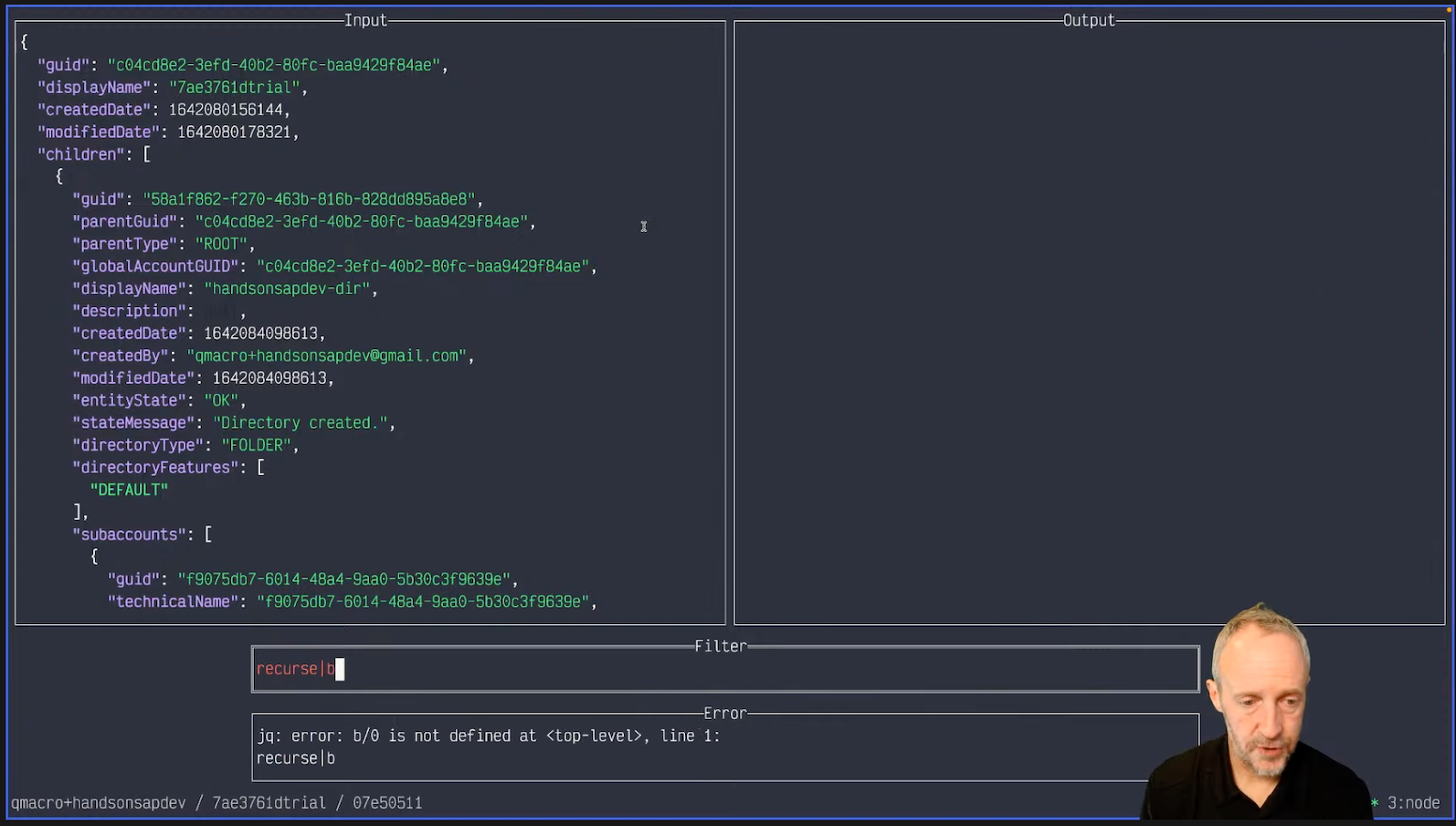 It gives me independence from the underlying operating system of my local machine (sometimes I even run it on a remote Docker engine), allows me to throw the environment away and start again nice and clean, and stops me from polluting my host operating systems with layers of software that are hard to remove.

So it occurred to me that, especially with the advent of VS Code’s support for remote development in containers, it would be an interesting experiment to see if the two worlds could complement each other.

In other words – could I use containers to help those, who want to get directly to the actual learning content of a tutorial, get there quicker?

Testing the solution out on a tutorial

I’m a fan of CAP development, and the tutorials on this in our Tutorial Navigator are great. For this experiment, I decided to focus on one particular tutorial: Set Up Local Development Using VS Code. 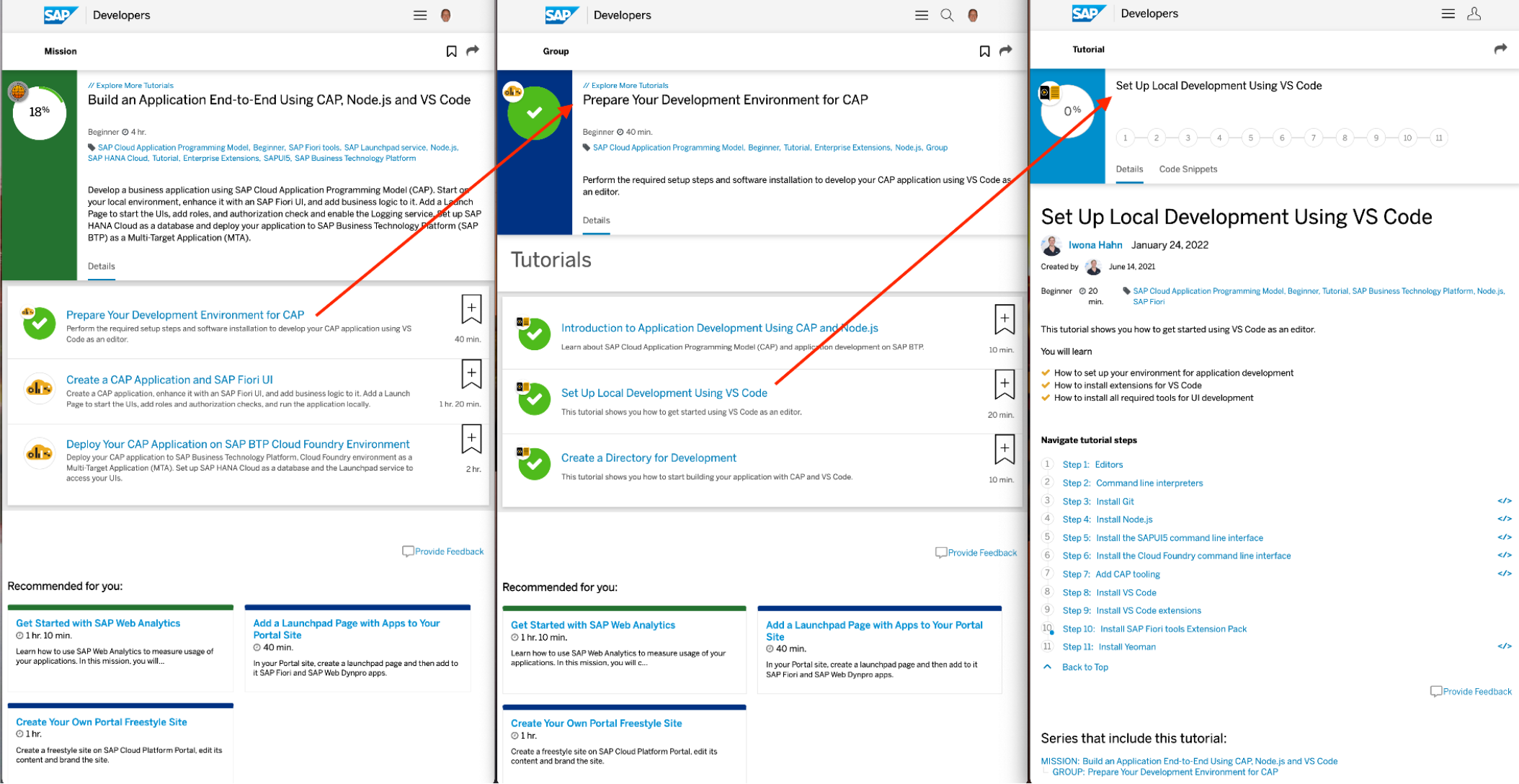 The screenshot shows 11 steps in the “Set Up Local Development Using VS Code” tutorial on the right hand side that help you get set up and ready to be able to work through the learning content in the actual mission (building an application end-to-end).

Software development today, especially of full stack applications with multiple systems and services, in the cloud, involves lots of different tools and skills, and this is reflected in the prerequisites.

I would encourage anyone and everyone to work their own way through the steps in this this setup tutorial; it’s a rich source of information and helps you understand what’s required. It also helps you think about your own development environment, what you need, and what you might want.

But I also want to encourage you to think about how to streamline such an environment, and what the next level of developer workflow and productivity might look like.

So in this short series of posts, I’ll work through defining and building a development container that has all the prerequisites for this mission set up for you. Not only that, this container will be relevant for you regardless of your actual local machine, whether that’s a PC or a laptop, whether that’s running macOS, some distribution of Linux, Chrome OS, or even Windows. All that’s needed is a Docker engine, such as Docker Desktop or something similar such as Podman and VS Code itself.

A brief note on terminology

A container is what you work with, what you connect to or even jump into to use the tools within it and carry out your development work. A container is created from an image; you could say that it’s an “instance” of an image. To talk of defining a container is really to talk about defining an image.

The goal here is to define an image that:

Let’s work through the tutorial steps and see what we need to do. Note that this flow is based on the version of the tutorial today, which is at commit ea9e51a in the source repository.

Before we start, we should decide on a base image upon which to build our definition. As we’ll be connecting to it with VS Code it makes sense to start with one in that context; in fact, as we can see from the tutorial, it’s a Node.js CAP application that we’ll be building.

There’s a set of base Dockerfile definitions available in the vscode-dev-containers repository, and after a little reading we see that this base.Dockerfile definition suits our needs. It contains Node.js, but also a complete environment that is based on the Debian Linux distribution.

Looking at the reference page, we see that the published image name is mcr.microsoft.com/vscode/devcontainers/javascript-node and there are various image variants available:

We’ll go for the 16-buster variant – Node.js v16, which is the active Long Term Support  (LTS) version, based on one of my favourite recent stable Debian releases, buster.

Before continuing, we can actually test this base image quite easily, and it will give us a feel for what we are using.

Now what happens when we run it without passing any parameters?

Nice! We get a Node.js prompt.

But we can also dig in a little further, and ask for a shell:

Even nicer! Access to a Bash shell (The One True Shell™️) is super useful, and there’s even zsh available if you’re that way inclined.

So that’s the base upon which we are to build. A good start. We have Node.js and a command line environment. These are the two essential ingredients for this tutorial. A Node.js runtime for our app, and a command line environment within which to work and where we can install and use other tools and utilities, both SAP-specific and more general too.

While we can use this image reference mcr.microsoft.com/vscode/devcontainers/javascript-node directly, we should really start our own definition file, our own Dockerfile – which is the recipe, the definition, for the image we want to build.

So let’s start with a very simple Dockerfile that uses this image reference as a base (note that the standard name is just “Dockerfile” with no extension – beware any Windows tools that insist on being “helpful” by adding one):

Here we’ve split off the variant part of the image reference to be the value of an ARG, so we can more easily modify it in future. Implicitly this also teaches us a couple of things about the Dockerfile syntax:

So unless we specify something explicitly on the command line when we run the build for this Dockerfile (with –build-arg VARIANT=something-else), the image that will be used as the base will be mcr.microsoft.com/vscode/devcontainers/javascript-node:16-buster.

OK. What else do we need? Well, to answer that, let’s take a look through the steps of the prerequisite tutorial itself. But we’ll do that in part 2:

This a great content to follow it and keep improving the sapdeveloper skills that to learn how to work into container #docker #vscode to building an application end-to-end.

Glad it resonates with you, Luis Benavides Andrade !

between my saturday afternoon run and the following shower I found some time to read your first blog post. Great content as always. I'm eager to read the second part after the shower or maybe tomorrow 🙂

Thanks Helmut! Hope your run went well, and that you enjoy part 2. I'd love to hear your thoughts on this topic, too. Cheers!

Would like to mention a blog post about dev containers and CAP development I wrote about two years ago. It's not as detailed as this series but gives some more reasons and explanations why to use dev containers in every project.

Excellent, thanks Helmut - I've added it to a new Further Reading section at the end of this post.

For everyone who is a docker-newbie like me, this is how I built my image from the dockerfile (being in the directory of the docker file):

And this is how I ran a container from the image with a shell session:

Hope this helps someone 🙂

Excellent, nice one Nicolai Geburek - I like readers who are eager to press ahead! 🙂 The build is covered in part 2 (look for the section "Giving the image a spin" for details) 🚀