with the latest incremental release of SAP S/4HANA Cloud for advanced financial closing on January 23, 2022, the access management abilities of the solution were massively enhanced.

Background of this update

Segregation of duties is a central requirement when it comes to authorization control. It ensures that an individual user doesn’t have the authorization to execute a process end-to-end. Instead, you rather want to distribute the respective authorizations across several people responsible for specific parts of the process.

In the context of financial closing, the requirements regarding access controls are very diverse and vary depending on the organizational and process setup of each customer. The enhanced access management abilities provide a flexible basis for granting access by providing fine-granular access levels that can be combined into roles as required. In this blog post, I will introduce you to the new access management features of SAP S/4HANA Cloud for advanced financial closing and give you tips on how to prepare for the switch to the new user role maintenance.

The Manage User Roles app within the configuration of SAP S/4HANA Cloud for advanced financial closing now allows you to create so-called “Scoped User Roles”. This means that each user role you create is applied to actions within a specific part or process step of the financial close, allowing for a clean and built-in separation of authorizations between design time and run time of closing task lists. We distinguish between two distinct scopes here:

User role for the setup and maintenance phase of task lists and their respective templates. Access rights are applied in the following apps: 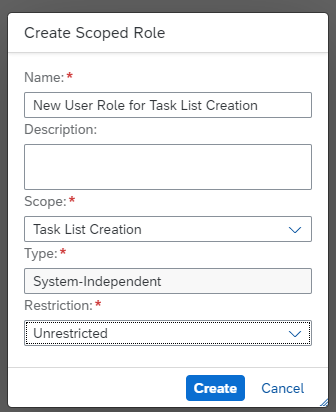 User role for the execution phase of closing tasks and their monitoring. Access rights are applied in the following apps: 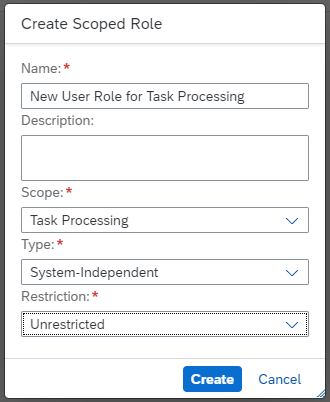 Feedback from our customers has shown that a mere distinction between read and write access is not enough to meet all the requirements for a complex setup of closing responsibilities in large multinational organizations. Therefore, the new user role maintenance comes with a much more fine-granular set of access levels. On the one hand, this allows for a strict segregation of duties. On the other hand, roles can also be combined into a collection of access levels within one user role, depending on the needs of the respective organization. 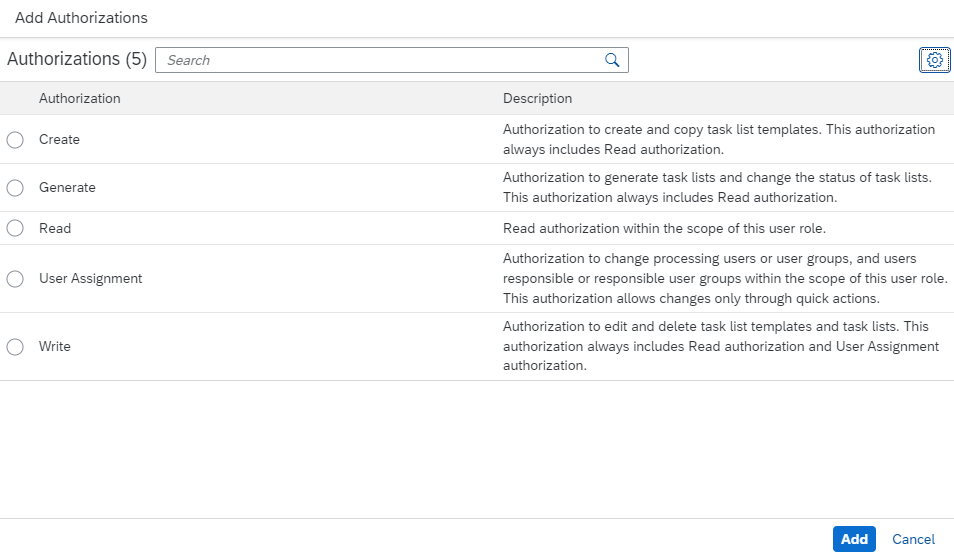 The scoped user roles including the new fine-granular access levels are planned to be released in January 2022 as an addition to the existing user roles. This gives you the chance to get familiar with the new maintenance UI and set up and test user roles along the new access levels. All new roles should be set up as scoped user roles from now on since the new user role maintenance will replace the old UI which is planned to be set to read only in May 2022. An adjustment to the default authorizations attached to the direct assignment of users as owner, user responsible, and processing user is planned to follow in August 2022, concluding the switch to the new authorization concept.

As of the January release, we recommend the following actions:

Authorization to create new task list templates and to copy existing ones must now be granted explicitly.

What you need to do: 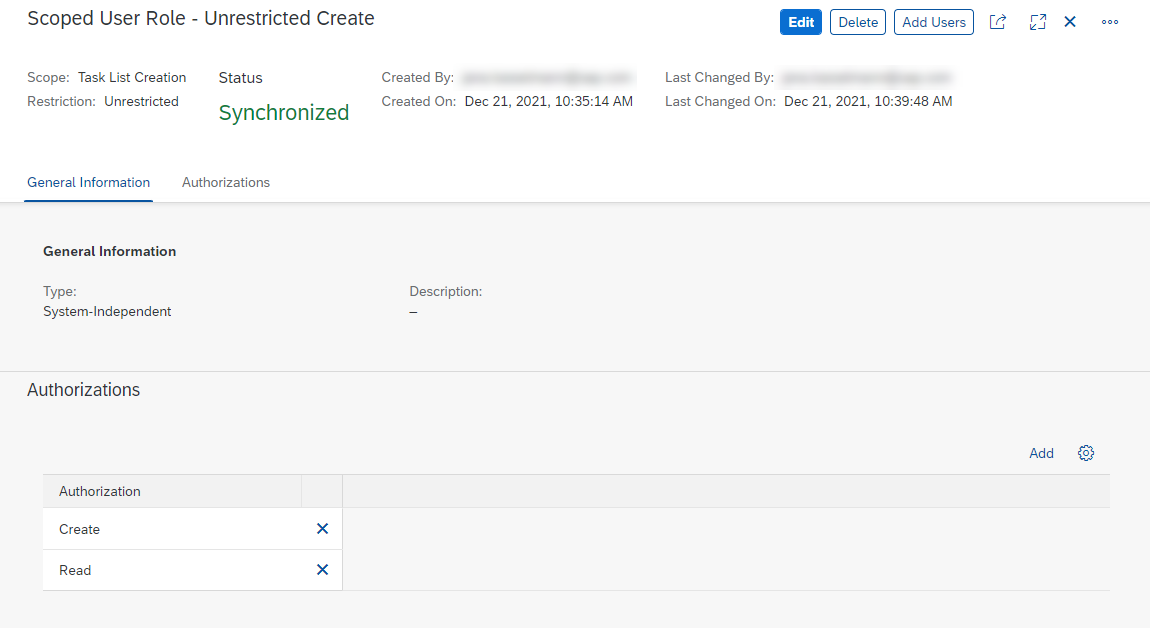 Review who should own a template or task list and is responsible for its setup and maintenance. This person or group must be maintained in the “Owner” field and not in the “User Responsible” field. Owners have edit rights in the Manage Closing Task Lists app and don’t need an additional role unless they need further authorization such as generating task lists out of templates.

Decide how to model the roles along the new access levels

While your existing user roles can still be used, the new access levels give you more options than a mere distinction between read and write access.

If you want a stricter segregation of duties, for instance, you can create separate user roles to grant authorization for editing templates on the one hand and generating task lists and changing task list status on the other hand.

When you assign scoped user roles to users, make sure to remove the existing roles as the new authorizations always apply in addition to the existing ones.

The current read authorization also includes some processing-related actions. The scoped user roles now allow you to grant clean read access to users who shall only be able to observe the task processing. 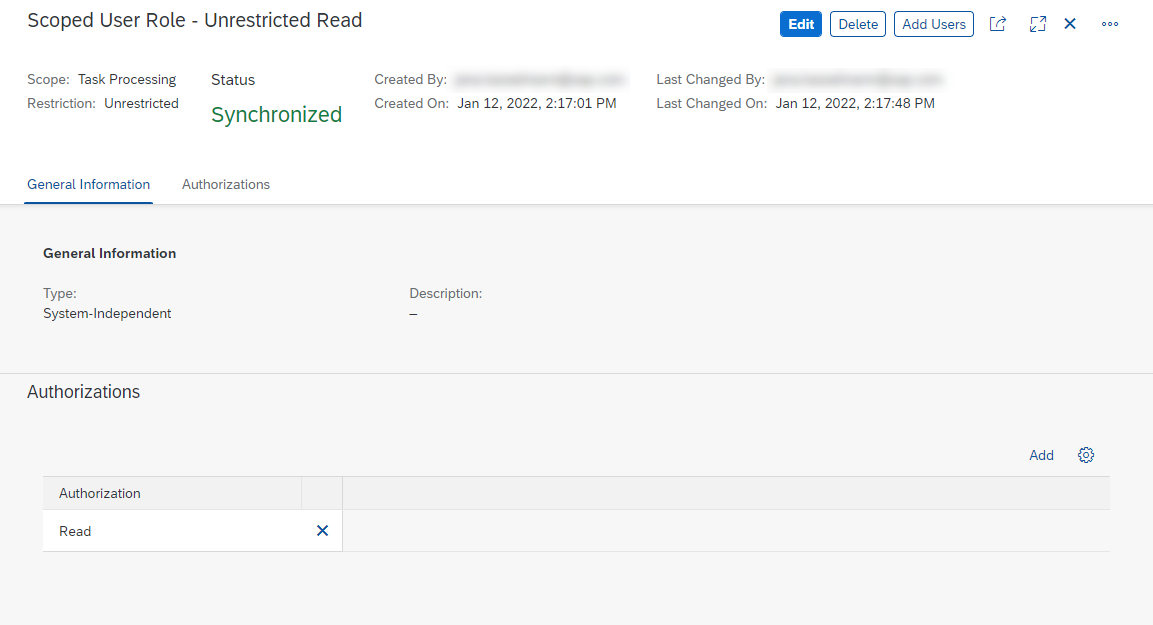 Decide how to model the roles along the new access levels

While your existing user roles can still be used, the new access management gives you a higher granularity in defining and bundling access levels.

If you want a stricter segregation of duties or a different bundling of access levels, you can create separate user roles to grant authorization for processing or editing tasks.

If you want to keep the current role setup, we also recommend here that you already familiarize yourself with the new user roles and access levels and create scoped user roles.

When you assign scoped user roles to users, make sure to remove the existing roles as the new authorizations always apply in addition to the existing ones.

The enhanced access management abilities provide you with greater flexibility and more options when it comes to ensuring segregation of duties and bundling access levels according to your organization’s requirements. The parallel availability of both access management concepts allows you to smoothly transition to the scoped user roles.

For more information on SAP S/4HANA Cloud for advanced financial closing, check out the following links:

Follow us via @SAP and #AdvancedFinancialClosing, or myself via Jana Kasselmann.

Please note that SAP S/4HANA Cloud for advanced financial closing gets frequent updates and enhancements. Therefore, the current features and functions may not be exactly as described here. For the latest information, you can refer to the product documentation on the SAP Help Portal.

I appreciate the new authorization concept in AFC for ensuring that only those authorization is granted, which is needed for work.

At a first glance I'm missing the possibility to create a role based on the property object owner, which was available in AFC S/4HANA. 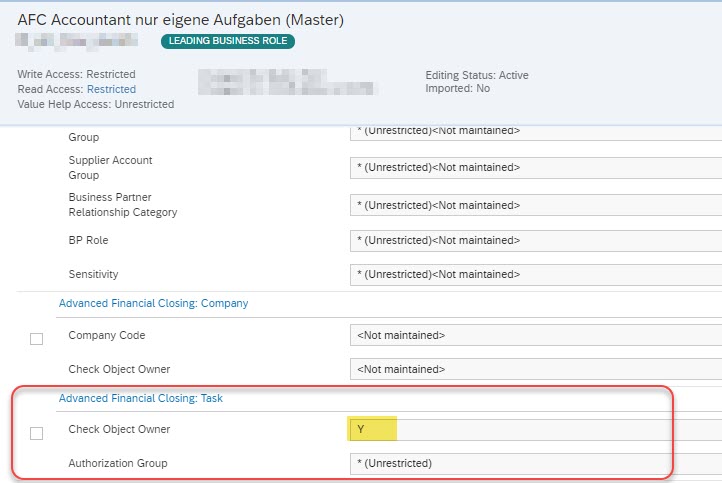 The usage of that authorization object grants access only to those tasks, for which the user was assigned as processing user or responsible user.

Is there a possibility to ensure such a restriction in the new concept?

From audit point of view it is essential having such a restriction ("principle of least authorization") - e.g. an accountant for accounts payable shouldn't have access to spool lists of a general ledger task (task type job).

Thank you very much for your feedback.

Thank you for your question and your interest in the new concept!

To cover your use case, you can make use of the following means within the enhanced access management options:

With this, you can control access to specific tasks in detail and grant only the minimum required authorization.

thank you for the additional information - that sounds pretty fine.

I will check the recommended chapters in the admin guide and will do a retest.