SAP AppGyver: Our Philosophy, Latest Updates and the Road Ahead

SAP AppGyver is now available for developers and organizations everywhere to begin harnessing the power of no-code. I had the honor of appearing onstage for the recent SAP TechEd Executive Keynote alongside Chief Technology Officer Juergen Mueller, where we shared how SAP AppGyver is pushing the limits of what no-code can do. So how exactly do our capabilities give superpowers to developers? And what kind of plans do we have to evolve the no-code ecosystem and take it beyond regular programming?

The philosophy behind our platform

SAP AppGyver allows you to craft whole applications from components through the drag-and-drop interface, which is typical in the industry and the process similar to creating a presentation in a presentation tool. However, behind the looks SAP AppGyver is a completely different beast from the rest of the no-code tools. What drives SAP AppGyver’s differentiation from the rest mainly comes down to our philosophy and mission for the kind of tool we have set out to build.

In SAP AppGyver you can start out quickly using larger components and create something that looks about right. From there you can always go deeper and explode every single component and change even the smallest details about them, how they look and how they function. We’ve taken this same approach across the entire platform, from the user interface to behavior and logic. This means that you’re not limited by the bigger building blocks we provide, but can instead control the exact behavior and looks of your application in the lowest level, just as with coding.

We’ve also taken other aspects of software development very seriously in the product, such as debugging capabilities that allow you to understand exactly what is happening inside your application as you’re building it. We’ve enabled the right kind of diagnostics to help you understand what you’re doing wrong or where the error might be. With this approach, we’ve created a no-code platform that is not just suitable for baby apps or prototypes, but for professional, mission critical software. We will continue to invest into these areas such as diagnostics, version control and performance optimization with the vision of providing even better – especially more intuitive – tools than what we’re used to in the regular coding environment. 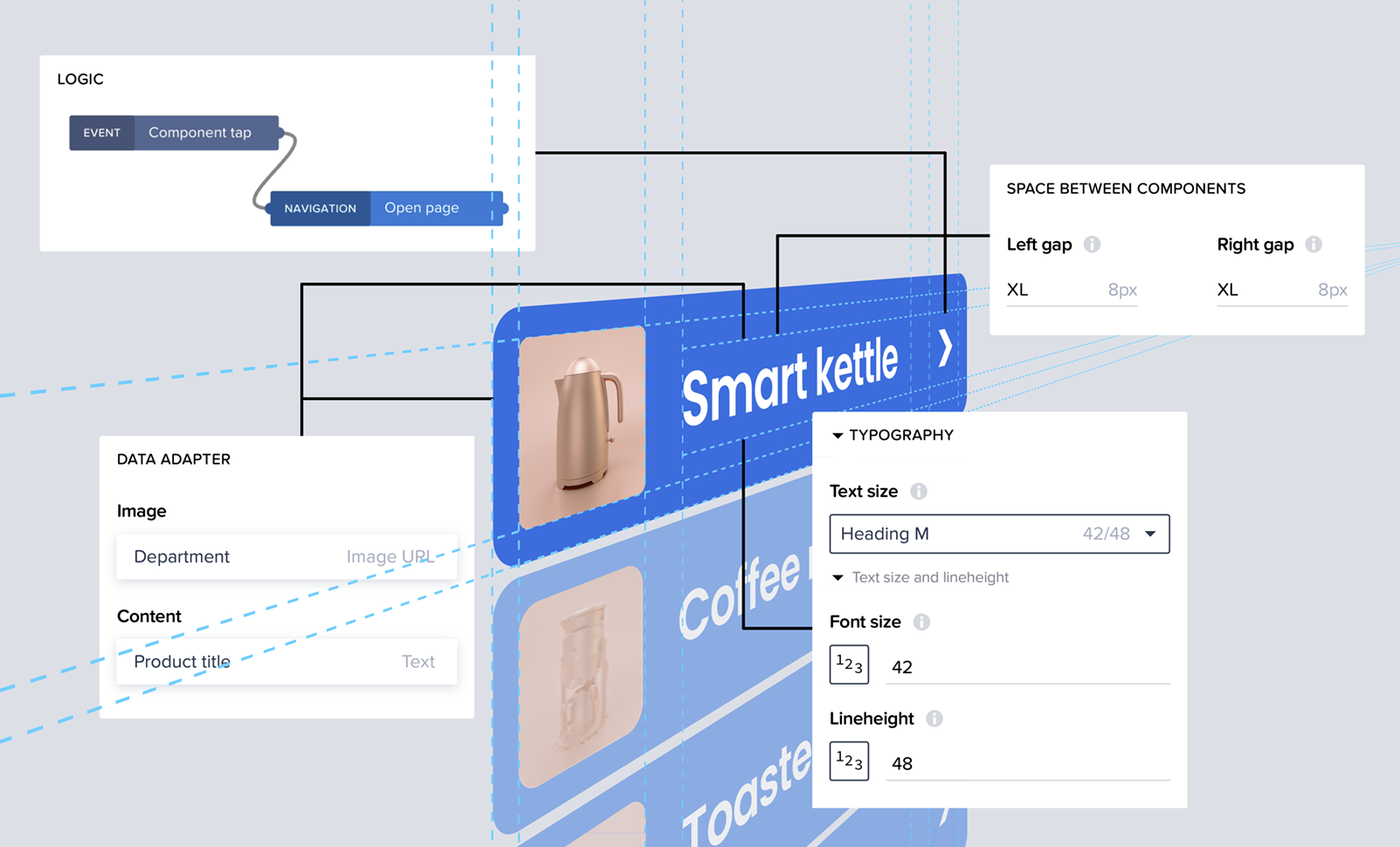 One of the most important things for us has always been to make sure that applications look and feel great. Previously, styling an app required modifying every single piece of the UI individually. With our latest release of the Universal Theme System, we have introduced a major upgrade that lets users coordinate styles and themes across the entire app in a controlled way.

Now when you’re building your application, you can define once how you want it to look based on your company’s brand or the design guidelines of your project. When you decide to change the main theme, all the components that you’ve used will automatically adapt and follow the guidelines, down to the color system, typography, backgrounds, and more. It allows you to create an entire design system for your no-code applications.

For some this may sound like a basic feature, but with the number of components provided in the marketplace and the depth of theming capabilities, you’ll see that it is truly magical. I encourage you to test it out and see how powerful it can be to adapt your designs across different themes. Even with this major update, we’re only getting started with the theming capabilities – you can expect a lot of enhancements going forward, such as adaptive design capabilities and component state support in themes.

What lies ahead? Extensibility, marketplace, and more

From the beginning, one of the main goals in building our product has been to make sure that you would never hit the brick wall. We have always wanted to avoid the moment where you can’t build what you wanted, and where you would have to be satisfied with less than what you could build with a code. It was not very easy to create a product that can truly be as powerful in expression as traditional programming languages, but in most aspects we’re already there.

The big area where we need to improve to reach that goal – and what we’re working on right now – is to enable further extensibility, for example with the ability to bring in your own native mobile capabilities. These will be packageable as reusable primitive components that then further work as building blocks in no-code world. This will open a new level in the ecosystem we’re building around no-code. Another concept that for us has been sort of the “Holy Grail of software development” has been the ability to reuse and share what you have built. This rarely happens in coding because it typically requires a lot of discipline to be able to abstract classes of code and turn it into usable libraries.

When you’re building something, you might have an afterthought that you could reuse that piece later. In SAP AppGyver we’ve already built the reuse aspect into the platform itself and tried to make it intuitive so that you have a quick path to package anything you’ve created into a larger component. This can range from a card view with a couple of images inside, a full algorithm with sequential logic, or even something very complex like a chat or comment feature.

However, the aspect of sharing your components with the rest of the world is not yet there, and that’s one of the major features we’re working on in near future. We want to make it possible that you can share what you’ve created with the entire SAP AppGyver ecosystem, so we are planning to open our component marketplace to everybody. Currently sharing components is only possible for our internal team and a couple of trusted partners, but it is in the core of our vision that our ever-growing developer community can add to the marketplace. Think of it as an open-source repository of components of all kinds and sizes. Until today, most of the components have been provided by our team, so opening the marketplace to everyone will mean much larger library of pre-built components, which is very exciting. Similarly with every other aspect of the product, we’ll be applying the same philosophy and enabling our users to contribute to the platform, from being able to package your own formulas, native development kits, custom themes, and more. With this approach, we plan to build an entire ecosystem of no-code developers, and we’re welcoming you to join us on this journey!

How no-code will take us beyond regular programming

This is just scratching the surface. As I’ve stated before, for us, no-code can and should be used to create sophisticated software. No-code should be used to take on the most ambitious projects in software development, and in 5 years from now, most software in the world should be built with no-code. Many other players in the industry have tried to remove the programming away from no-code and allow you only to build very simplistic applications. We have removed writing code, but we embrace the programming aspect – as part of our visual programming model – knowing that people want the same power of expression where they can be in control and truly make the application look and feel the way they want. Putting visual programming at the core of no-code is what really makes us different. And it’s the only way for no-code to truly replace code.

In SAP AppGyver, the attention to detail and level of control you can have over individual components will – in some ways – take you even further than regular programming. Design teams, for example, can now create a sophisticated design system once and apply it across all aspects of an application faster than ever before. Our design philosophy is to enable people to do things with the intuitiveness and speed never seen before, and to skip all the boiler plate code, and allow you to focus fully on the unique aspects of your app.

For SAP enterprise customers we are now supporting the OData format that allows easy integration with existing SAP data endpoints, and we’re not stopping there. We are step-by-step adding deeper integrations for many SAP products with the vision that you should also be able to integrate with any real production data in matter of minutes, which is the true power of applications in a business setting. In addition, as stated on our public roadmap, there are exciting new features upcoming with regards to no-code approach of building cloud services, sophisticated integrations and more. This will open a whole new chapter in what kind of applications you can build with no-code.

If you’re considering which no-code platform to use, ask yourself this: do you want to utilize a product that sees no-code as something to create only simple apps? Or do you want to invest into a platform that strives to be easy and fast to use, while at the same time taking the development process as seriously as real programming and providing the full power of expression? Our promise is that if you can build this software with the current programming languages, you will be able to build it with SAP AppGyver as well, but this time without coding. In our community we’re enabling everybody on the same platform, from eight-year-old kids to publicly listed companies building mission critical software, and this is something you’ll want to be a part of.

To see what’s ahead, check out SAP AppGyver’s public roadmap.

thanks for this article. I'm really eager to build my first SAP customer applications with AppGyver. But what I miss in your article and in the roadmap is the possibility to use Fiori Components, aka SAP UI5 Web Components. I need to develop apps that exactly look and behave like other Fiori apps.

So will there be a fast and easy way to integrate UI5 Web Components into AppGyver or have all the components to be rebuild from scratch?

Thanks and regards
Helmut

SAP AppGyver is supporting the Fiori theme and expanding our collection of UI5-equivalent components, but “native” support for UI5 directly is not planned, due to the fundamentally different nature of how AppGyver apps are built compared to traditional HTML-based ones.

thank you for the answer. Is there a roadmap available for UI5-equivalent components?

If AppGyver would support Web Components somehow, which is a standard meanwhile, it would also support UI5 components.