What problem is Intelligent Lookup trying to solve?

Intelligent Lookup lets users harmonize datasets that share no common identifier. This is oftentimes the case when two datasets stem from different origins like internal data vs. external data or data provider A vs. data provider B. A typical example is when suppliers try to make leverage sales data that they receive from a retailer selling their products. Very often, the retailer will not reliably share the supplier’s own ID back to them, but rather use their own, proprietary product ID. Even if they do share it back, this might not be true for 100% of the cases, leaving the supplier no choice but to use other columns like product description, product category, attributes, price etc. to map the sales data back to the supplier’s own product master

Another typical case is that of region data, where special characters, abbreviations and place names in different languages make the data integrator’s life pretty difficult

In their blog post & video, SAP partner Nagarro ES are going over a case of web orders that customers places as either guest or as existing customer. Orders thus might have a customer ID included, but many guest orders can actually be traced back to customers who did indeed order as guest, but whose name, address or email could help identify them as known customer, thus giving the retailer a 360 degree view on customer behaviour despite incomplete order data

In this video, the SAP Data Marketplace team is trying to assess influence of tourism on a country’s CO2 footprint, by harmonizing a Data Marketplace asset on CO2 emissions with one on tourism turnover. Unluckily, spelling differences between country names like “Democratic Republic of Congo” and “CONGO, DEMOCRATIC REPUBLIC” prohibits them from using a standard database join. Luckily for them, Intelligent Lookup takes no more than 5min to solve the case

We foresee a lot of such mix & match problems particularly when using SAP Data Marketplace assets with SAP source data from S/4, BW, Ariba, Concur etc., simply because data governance is handled differently between different sources. This is why Intelligent Lookup is of great help in the context of SAP Data Marketplace, but subject matter experts know plenty of other cases in other domains also, where data matches semantically and not technically

How does Intelligent Lookup solve the data harmonization problem?

Intelligent Lookup addresses the matching problem through a series of user-designed matching rules that can be chained to arbitrary length. Each rule is either doing an exact comparison of field values or a fuzzy comparison of string values. Rules can be chained such that insufficient or failed matches from one rule can be piped into another rule for trying another strategy.

In the example of this blog and highlighted in this video, the tries to find geo coordinates & continent of web orders that have been placed on those same cities. Four rules that look at city, region and country in an exact and also in a fuzzy way allow to solve a problem that looked enormous (81% failed matches) to a small & manageable one (<2% failed; some match candidates to review & confirm) in small amount of time.

Users can take decisions on individual cases in a work area that makes concrete match proposals and that was designed primarily with end-user efficiency in mind.

Matches made by rule or through human decision-making are persisted in a “pairing table”. This table represents the missing link between the two tables, i.e. it contains the identifiers & their match status that users were so dearly missing originally when they only had those two datasets. The pairing table is Intelligent Lookup’s secret sauce and is ultimately what is being used at runtime when data is being requested from an Intelligent Lookup’s output view. That output view is essentially a three-table join over the input table, the pairing table & the lookup table. Depending on configuration, the records currently in status multiple match & unmatched are either included or not. Including them is the default, but obviously no value for the requested return columns can be identified, thus leaving them null

The basic relationship for the output is depicted in the join diagram above, though the inner workings of Intelligent Lookup are somewhat more complex to e.g. leverage match status & default value for the return column values.

In essence, Intelligent Lookup is therefore a clever way to design & fill this pairing table. Once a match has been made, its value is stored in the pairing table and subsequently used without consulting the rules themselves anymore. This captures the business knowledge that users put into designing the rules & taking match decisions, honors the time-investment made by the user and thus creates a reusable data asset over time.

What is a pairing column? How do I choose it?

A pairing column can be thought of in different ways:

The following ground rules apply for choosing the pairing column:

Some final notes before closing this topic:

What about those different workarea tabs – matched, in review, multiple, unmatched?

Intelligent Lookup uses rules to triage records into 4 separate buckets that reflect the confidence that the system has on the results and how it intends to treat them in the output. To that end the system applies the rule on all relevant records to get their respective match bucket:

As written above, buckets for multiple matches and unmatched records are very different:

For b), the issue is about finding matches or at least match candidates. So users who “Add Rule for Unmatched Records” need to come up with a strategy about what to compare between between input record and lookup records so as to suggest a match. All records in the lookup entity are potential candidates. Because of the entirely independent nature of the rule, we sometimes also talk about a “new” rule, because it is new and independent of its predecessor rule. Logically, it forms an OR condition with its predecessor rule.

The Intelligent Lookup UI distinguishes between both rule types by introducing the terms input scope and lookup scope. 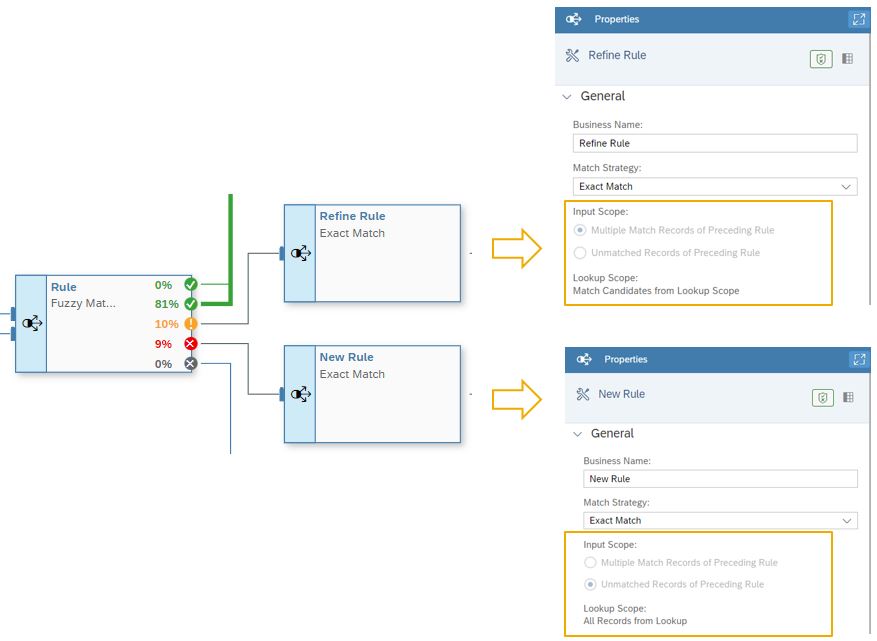 While this might sound opaque at first, the concept is really straightforward. This blog post & video show a worked end-to-end example that uses both types of rules and should make things a lot clearer, if you still have questions around this.

How does Intelligent Lookup deal with changing data?

Intelligent Lookup deals with changing data by cleverly using the existing matches where available and reverting back to Intelligent Lookup’s rule graph where matches don’t yet exist. This will be the topic of an own blog post, but let us give the short answer here:

What happens now, when 150 new records are loaded into the input dataset? What will the output view contain? In essence, this is really simple because for each and every record of the updated table, the system asks itself the following questions:

Note that this decision tree is done in the output view of the Intelligent Lookup operator itself and esp. do not need the Intelligent Lookup to be run. In the above-mentioned sales example, this means that if new sales transactions are received, then all transactions on known & matched retailer products IDs are automatically matched to their respective supplier product ID. The same is essentially true for multiple matches or unmatched products that are still in the works: any new transaction on the same products will also be counted into that respective bucket and be itself a multiple match or unmatched records. Only genuinely new, never-encountered retailer producht IDs count into the unprocessed bucket and need a new execution of the Intelligent Lookup. If we are lucky and the rules are well designed, then those rules will automatically identify the respective supplier product and match them. Whatever the outcome the rule on concrete products, eventually all IDs, also the new ones will end up in one of our famous buckets: matched, in review, multiple match and unmatched.

What about slowly changing or time-dependent dimensions?

Intelligent Lookup today persists all the matches it can find and automatically uses these at data retrieval time. While we do envisage a concept for time-dependent dimensions and entirely acknowledge its importance in practice, users can already today cleverly use Intelligent Lookup’s existing features to handle time-dependency

Where can I learn more? What resources exist?