ABAP Platform 2021 is not shipped as a standalone product. ABAP Platform 2021 consists of the AS ABAP, the ABAP Development Tools (ADT) in Eclipse and several additional technology components which are required to run SAP S/4HANA.

One of the major investment areas in the ABAP Platform is the ABAP RESTful Application Programming Model (RAP). RAP comprises essential extensions of the ABAP language, ABAP Core Data Services (CDS), development tools, and frameworks which enable the efficient end-to-end development of intrinsically SAP HANA-optimized SAP Fiori applications and web services on the AS ABAP. The feature scope of the ABAP RESTful application programming model has been further enhanced with the ABAP Platform 2021. Just to name a few of the delivered enhancements, RAP now supports the implementation of the unmanaged early numbering in managed and unmanaged business objects. Business objects supporting multi-inline editing on an SAP Fiori UI can now be implemented. SAP Information Access (InA) and SQL based services can now be created with the service binding editor to support respectively analytical scenarios with live data connection and data integration scenarios with ODBC based clients. Various enhancements have also been delivered for determinations, actions, validations, the feature control, the authorization control, and the projection layer.

ABAP Development Tools in Eclipse in ABAP Platform 2021 deliver various enhancements for RAP, ABAP CDS and ABAP for SAP HANA developments like, for example, preview analytical queries app, creation of service consumption model for RFC, service binding editor for OData V4 services or quick fixes for creating behavior implementations. ABAP Cross Trace was designed for ABAP developers who build OData services or other ABAP functionality related to the RAP and provides root cause analysis of RAP based applications incl. processing of OData requests, for example, in SAP Fiori apps. Further implementation efforts were applied for the extension of the feature scope like new ADT editors for Text Elements, Application Log objects and ATC check variants. Enhancements in the documentability capabilities and ADT basics tutorial for beginners and tips and tricks are targeted to make your daily work with the ABAP Development Tools in Eclipse easier.

The Custom Code Migration App in ABAP Platform 2021 was extended to support replatforming projects especially for custom code transformation to SAP BTP ABAP Environment. Dependency analysis enables customers and partners to set up the dashboards to track down dependency of custom code with SAP standard based on calls to SAP application APIs or DB accesses to SAP tables. Dependency analysis provides input for the decision making for custom code transformation to the SAP BTP ABAP Environment.

Further enhancements were done in the areas of connectivity, integration, and security like, for example, creation and consumption of proxies to trigger operations on remote SOAP and RFC services​, OAuth authentication for SOAP, HTTP​. Specially for better logging and for auditing purposes new apps were delivered to display static system information or security events. In addition, the scope and coverage of secure by default settings were extended in SAP S/4HANA 2021. 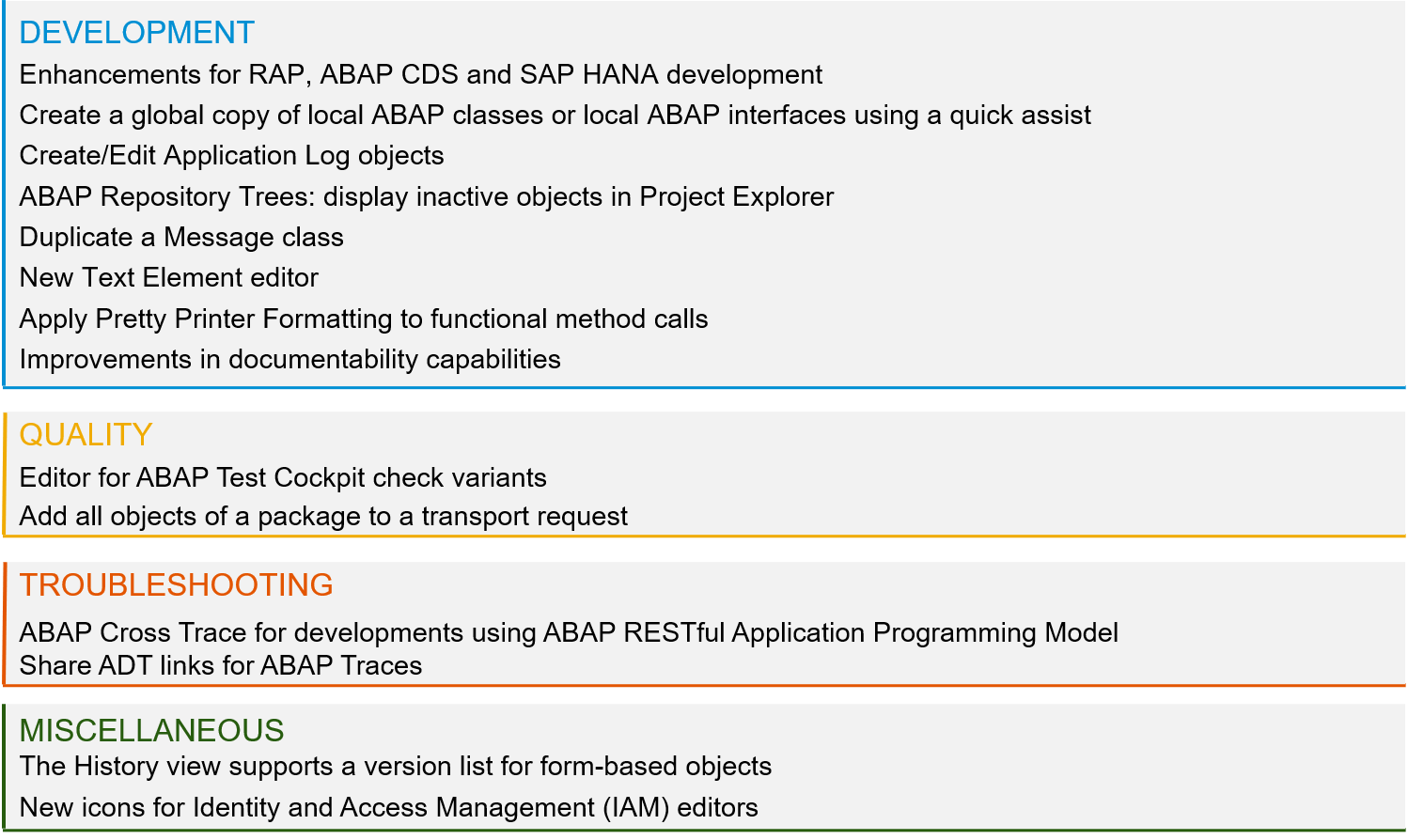 This presentation provides the official slide deck, just click on it to view: 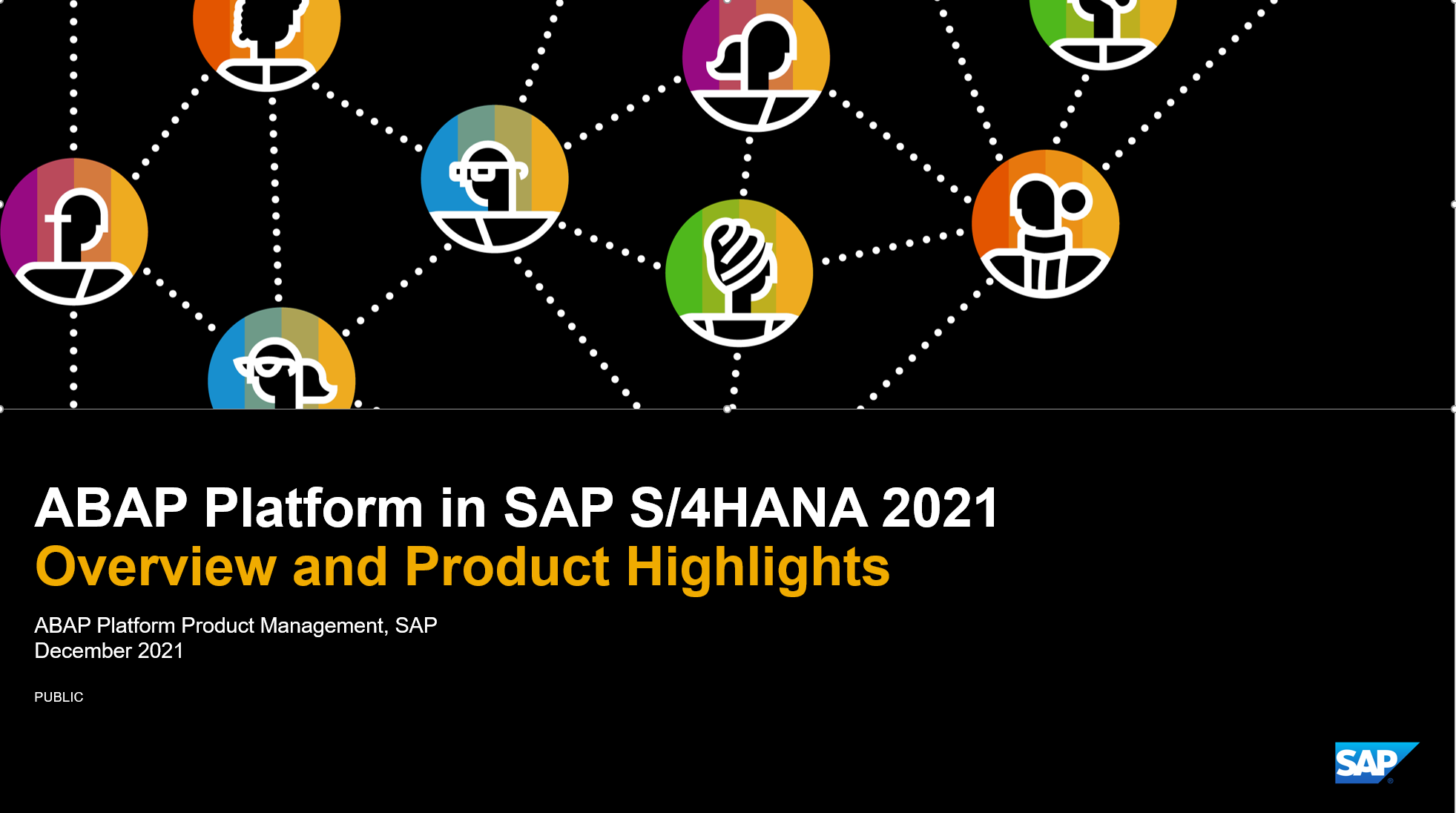 Working with Hierarchies in ABAP SQL

Getting Helpful Tips & Tricks When Working with ADT

How Do You Learn Best ABAP CDS Development Using ADT?

How to backup custom code with gCTS

The story resumes – Secure By Default for SAP S/4HANA 2021

ABAP Sessions at SAP TechEd in 2021

*New ABAP layer 😅. Thanks for the blog btw.

Thank you Olga , great to have a good summary of the new features!

Thank you Olga for wrapping-up the 2021 related news in such a short time from the release date.

This blog is a great launchpad for the exciting ABAP 2021 learning journey.

A small curiosity: I can see a lot of improvements to ADT and I am wondering to know its adoption level. Is 2021 the milestone for ADT to win against /nSE80 or the competition will still last lot of years (with focus only on S/4) ?

thank you for your nice feedback!

The adaption of ADT in Eclipse is going its way ahead. In all our ABAP customers workshops the hands-on exercises have ADT in Eclipse as a prerequisite, and many people already know it well. Of course there are still some areas, where SE80 is sufficient (like for example maintenance tasks on old releases), and for people doing this work there is no need to switch to the ADT. Therefore I would not see ADT and SE80 in a competition. Of course the adaption of SAP S/4HANA drives adaption of ADT in Eclipse, but many people use it also already on ERP.

SAP Information Access (InA) and SQL based services can now be created with the service binding editor to support respectively analytical scenarios with live data connection and data integration scenarios with ODBC based clients.

Does this mean that InA-based OData services can be generated for consumption by custom analytical UI5 apps?  If so, are you able to point me to any documentation that would provide technical information about using this capability?

The InA-based services can be consumed in SAP Analytics Cloud to build apps – e.g. to build stories like explained here. UI5 controls do not yet support the InA protocol.