What Are The Secrets Of Santa’s Supply Chain? 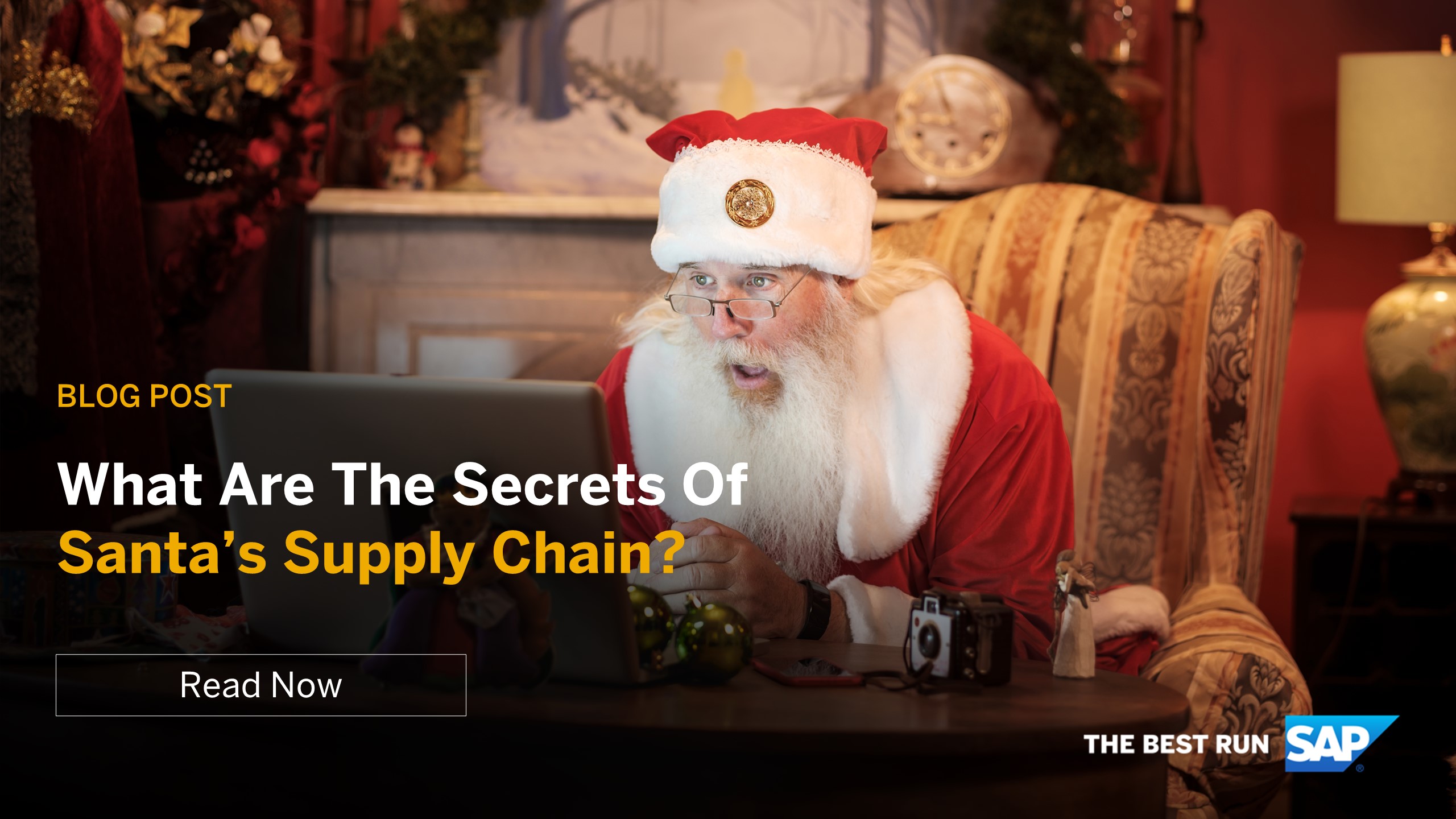 To get Santa in front of the microphone is like winning big in the lottery. So, when we, Richard and me, had the chance to get on-line with him while he was working from home at an undisclosed location somewhere near the North Pole, we jumped at the chance. We discussed the upcoming Christmas season, and the challenges of keeping his adoring customers happy this, somewhat unusual holiday season also on Forbes.

So, what are some of the secrets of Santa’s supply chain?
Well, settle down by the fire, with a hot cup of cocoa and read on….

How does Santa get an accurate view of demand?

Obviously, due to the pandemic Santa’s historical approach to demand sensing – face-to-face meetings in Santa’s Grottoes around the world – has been cut back drastically over the past 2 years. He is now embracing digital technologies such as virtual meetings, e-commerce orders, emails, and texts.

As his target market (children of all ages) are moving over to use social media more often, Santa has done so too, to improve and to get the true 360 view of his customers. That’s right girls and boys, if you still don’t know, you can “friend” Santa on Facebook and follow him on Twitter, @Santa or reach him via C2S (Child2Santa) at: santa@santaclaus.com.

But if you prefer the more nostalgic way to send Santa your wish lists, feel free to use the digital postal service or send him your “wish list” via the traditional letter (your parents may remember these).

Unlike many other companies, Santa does not see a major change to his delivery model due to the increase in e-commerce orders, as he has been perfecting his D2C (Direct to Chimney) delivery model for hundreds of years. He really was ahead of his time in that respect.

How does Santa manage his Naughty and Nice list?

When it comes to Santa’s customer segmentation, he has a laser focus on customer centricity and always strives to deliver everything on everyone’s Christmas list. And of course, Santa is using the latest technology to segment his customers into his two traditional groups: Naughty or Nice.

Santa’s customer database has over 7.8 billion records and growing, so you would think it would take a lot of time to segment and analyze. But by leveraging real-time visibility (often from his band of “Elves on the Shelf”), and predictive analytics, on a cloud-based solution, he can do his customer segmentation within in seconds. Hence, be aware that Santa always knows “if you’ve been bad or good, so be good for goodness’s sake.”

How has the pandemic affected Santa’s supply chain?

The latest supply chain issues caused by the pandemic have affected many businesses. Even Santa noticed some disruption in the supply chain but as he started to put risk mitigation strategies in place to ensure he has a resilient supply chain.

And that means, Santa has

What precautions have been put in place at the North Pole Manufacturing centre?

Santa has had to put several EH&S (Elf Health and Safety) initiatives in place to ensure the safety of his “little helpers”. He is very proud of the vaccination rate amongst the elves, which is at 99.9%. He has also incorporated IoT enabled sensors into the elf’s uniforms which triggers the bell on their hat to jingle if they are too close to a co-worker.

Taking a deeper look into Santa’s manufacturing and distribution facility, at first glance the North Pole location does not look ideal from a logistical perspective.  But Santa has total control of his manufacturing and achieves tremendous economies of scale in production by having a single manufacturing facility – Santa’s Workshop.

In what is probably the largest single manufacturing plant in the world, he and his workforce (Santa’s little helpers) have to produce 10’s of millions of presents every day of the year. And as a result, inventory of billions of end products is built up towards the peak season (Christmas Eve), creating the ultimate warehouse management challenge.

What are the logistics of delivering to the world in 24 hours?

Actually, due to his “follow the moon” approach, Santa has 31 hours to deliver all the goods. This still means that he must plan a transportation route of around 822 homes every second, so Santa cannot afford to have any disruptions or transportation bottlenecks.

Santa is in a lucky position when it comes to the logistics of delivering the gifts, as he has his own logistical fleet of “a sleigh and eight tiny reindeer,” which means that he was not significantly affected by the recent container ship crisis. This unique mode of transport is very carbon conscious as has zero emissions (well, almost!)

The weight of gifts on the sleigh has always been a concern as if you estimate one gift per customer at an average weight of two pounds, Santa’s sleigh tips the scales at 7.4 million tons. In recent years, new IoT enabled weight sensors have been installed to ensure the sleigh isn’t overloaded or out of balance.

Although Santa assures us that he is fully vaccinated, and has had his booster shot, he is constantly having to re-plan his transportation route based on the latest country COVID guidelines, which are changing daily.

How does Santa ensure his sleigh is in perfect working order?

This is another area where Santa has embraced technology. He has kitted out his sleigh with sensors that can track how it is performing during his marathon journey around the world. If, for example, one of the runners is starting to rattle and come loose, the digital twin starts flashing in mission control, and an alert is sent to one of the crack elf maintenance teams located around the world, with instructions on what parts and tools are needed, and where to meet Santa to perform the maintenance whilst he is busy dropping gifts off at the foot of a Christmas tree.

As we move into the “most wonderful time of the year”, Santa’s has assured us that the runners are sharpened, the reindeer are at peak fitness, Rudolf’s nose is shining bright, and manufacturing is at full production. He closed by saying “Merry Christmas to all, and to all a good night.”

To learn more about how you can put processes in place to enable a resilient supply chain, download this recent Oxford Economics study.