I just completed my first Tech Byte as a Developer Advocate!! 😀

SAP Conversational AI is really cool, and you can see how to create chatbots with both basic and advanced features in these tutorials. Still, I wanted to start working on more SAP scenarios, like:

So I started with a simple case:

You can see me do it in the following video:

And if you want to do it yourself, instructions are included in this tutorial (from SAP Tutorial Navigator): 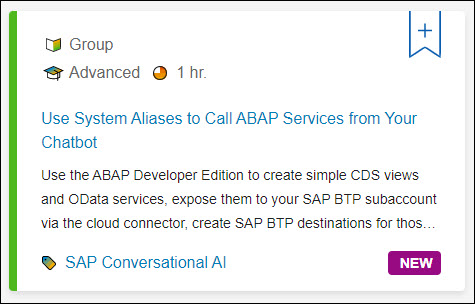 Why the Tutorial/Video Is Cool?

First, I always wanted to learn what it was like on the for those on the ABAP side of the house. So I got to learn how to install the ABAP developer edition, use Docker, create CDS views, and expose them as OData services. This was surprisingly easy – I could create the CDS views and service definitions and service bindings, then delete them, then re-create them, and I never had a problem. Special thanks to Mamikee Kanneh and her video series, including Getting Started with ABAP Development – Part 1.

Second, it forced me to not be afraid of the Cloud Connector (though do be careful using it).

Third, I learned how to use destinations in SAP Conversational AI Enterprise Edition, one of the key SAP BTP integration features.

Fourth, I got a chance to create chatbot versions and environments, and better understood how they relate to each other. More importantly, I learned about system aliases, how they enable the consumption of SAP BTP destinations, and let you assign different backend systems to different chatbot versions/environments.

SAP Tech Bytes is an initiative to bring you bite-sized information on all manner of topics, in video and written format. Enjoy!