Function that is specified in front of the definition of a window in an ABAP SQL window expression and evaluates the rows of the window, is known as window function. Such a function performs analytic operations over a set of input table rows that are somehow related to the current row and help us to solve complex query challenges in easy ways. Window functions are aimed for writing a single query which shows grouped information AND individual information in a query. You might say, it is also possible to use the GROUP BY clause to show grouped information. But the GROUP BY query has its limitation, in that it won’t show you individual data as well.

The addition OVER designates a function as a window function. If you’d like to narrow the window from the entire dataset to individual groups within the dataset, you can use PARTITION BY to do so. You can use the ORDER BY clause as well in defining a window function. It simply orders by the designated column(s) the same way the ORDER BY clause would, except that it treats every partition as separate. The ORDER and PARTITION define what is referred to as the “window”, the ordered subset of data over which calculations are made. Detailed explanation on the windowing syntax and related additions can be found in this blog about Window Expressions in ABAP SQL.

Window functions can be divided in three main groups:

Many of these functions are already known to the ABAP community. From release 7.54 ABAP SQL supports the following new window functions in window expressions as well:

The window functions LEAD or LAG are suitable for calculations, such as determining the difference between values in the current row and values of the preceding or following rows.

If diff is not specified, the value 1 is used implicitly. If the row determined by diff is not in the current window, the result is the null value by default. If the optional SQL expression sql_exp2 is specified, it is evaluated and returned for the current row in cases where the row does not exist.

SELECT statement with the window functions LEAD and LAG as operands of an arithmetic expression. The addition PARTITION is not specified, which means there is only one window with all rows of the result set. Both LEAD and LAG have only one argument each, which means that the difference between the values of the column NUM1 is calculated using the directly following or preceding row, and any nonexistent rows produce null values. The latter are defined using a null indicator. The program DEMO_SELECT_OVER_LEAD_LAG_DIFF uses this SELECT statement :

and, when executed, the program displays the result, as partly shown below. 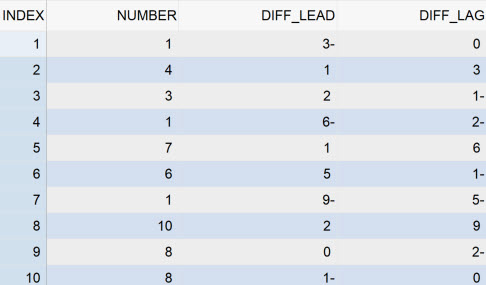 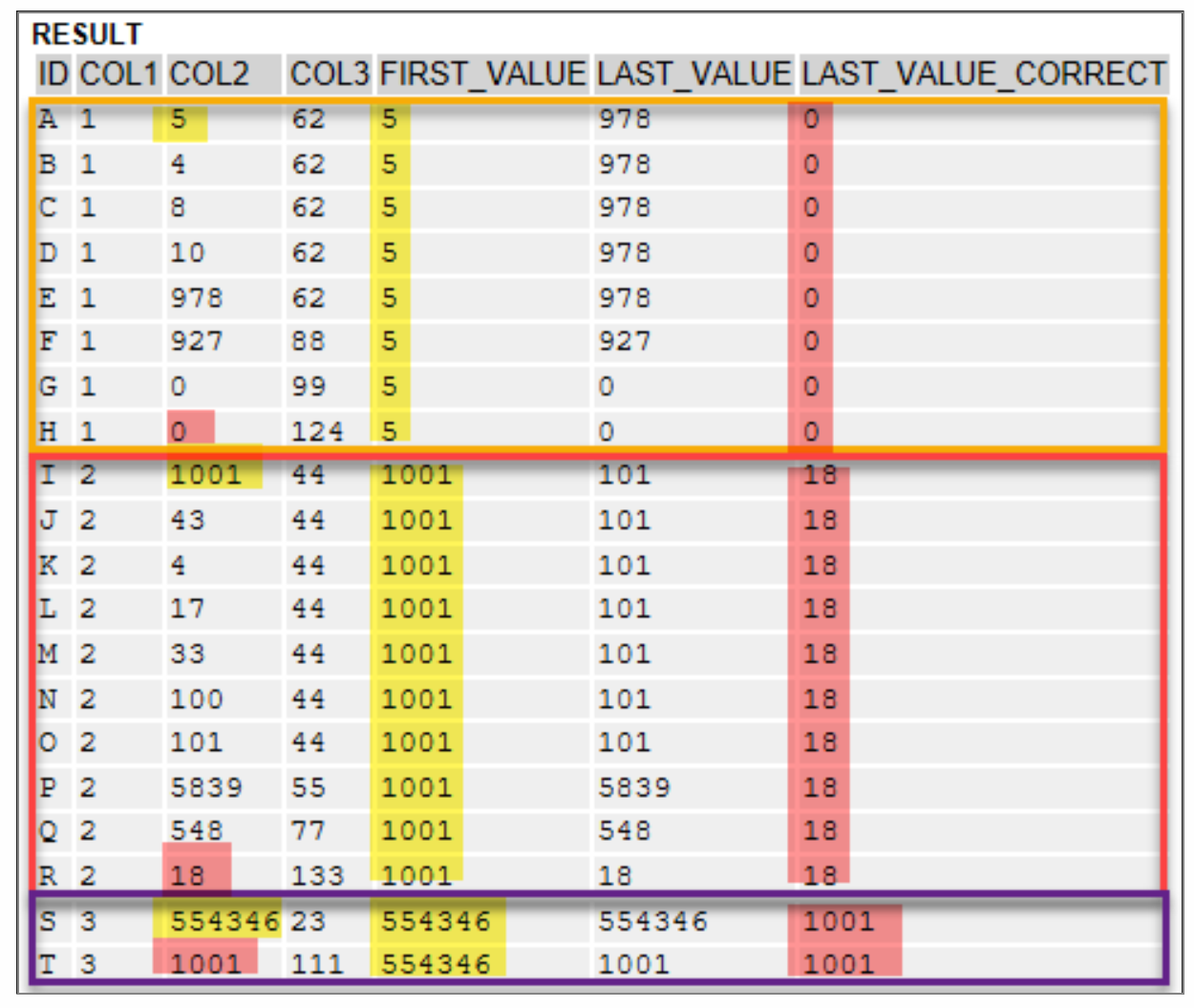 In this example, col3 has multiple duplicate values. The key field – here the field ID – is used to sort rows with the same value.

This window function divides the rows of a window into n buckets. The goal is to fill all buckets with the same number of rows by following the rule specified after ORDER BY. If the number of rows of the window m cannot be distributed equally between the number of buckets n, the remainder r is distributed in such a way that the first (m MOD n) buckets each contain one element more. The buckets are numbered starting with the start value 1 and the result of the NTILE function is the number of the bucket a particular row belongs to. The syntax is

n must be host variable, a host expression, or a literal of type b, s,i, or int8 which represents a positive integer. The OVER-clause including ORDER BY is mandatory.

If n is negative, for literals and host constants, a syntax error occurs. If n is a variable or an expression, instead of a syntax error, a database error and its respective exception CX_SY_OPEN_SQL_DB can occur. The result of the NTILE function is always of type INT8.

Since the maximum number of rows in a bucket can vary by 1, rows with the same value can also be in different buckets.

Sorting of all employees listed in table DEMO_EMPLOYEES by their salary and distributes them into five salary groups.

Group 1 has one entry more, as the number of employees (11) cannot be distributed into five groups of equal size. 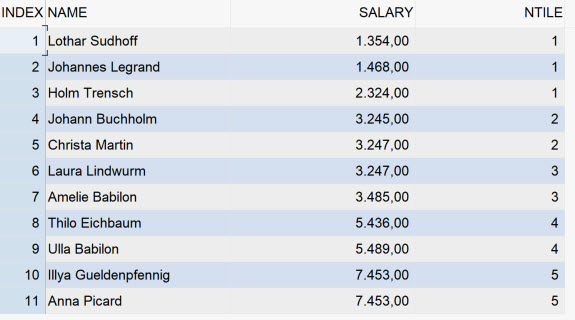 You can check out a complete list of ABAP window functions in ABAP Keyword Documentation.

Is the sql windows expression available in ABAP CDS on S/4 HANA 2021 too?

Thanks Christian for your interest. as far as i know, SQL functions like LEAD, LAG, NTILE and other are still not supported in CDS views. But maybe this blog could help 🙂

nice blog and very good explanation, many thanks!

Hello Safa, thanks for bringing another very useful blog.

you're welcome 🙂 nice that you follow the blog chain 🙂

3. The blog (linked in the comments above) is dated 2017 and it already mentions LEAD, LAG, NTILE. So, which of the functions are actually new? It's totally fine to mention functions that existed before (I'm sure many readers never heard of them anyway), but when the blog title says "new", I feel the availability needs to be noted better.

And I understand this is more of a philosophical question but I still want to ask:
4. Why can't these just be supported by the CDS views? These are SQL functions, why do we have to go through a table function to get this functionality? Aggregate functions work with CDS, why not these?

Thanks for your interest. As it said in the very first sentences here:
Function that is specified in front of the definition of a window in an ABAP SQL  window expression and evaluates the rows of the window, is known as window function.....  Also the meaning of 'window is explained in the linked blog as well as here in the text: the ordered subset of data over which calculations are made. So I believe it must be clear with the meaning of a window function! Though it doesn't harm to search more

also some times would be good to read twice 😀

As it is ALSO said in the text, this aggregation functions can be used in a window expression and in ABAP we consider them as one of the three types of window function.

The functions lead, lag, ntitle and... already existed as a SQL function, what is new is their usage in ABAP SQL which is just possible from release 7.54 & 7.55 (2019-2020). The blog you shared says : 'Currently SQL functions like LEAD, LAG, NTILE and other are not supported  in CDS views.' and try to define a way to use those functionalities in other ways...