With a lot of searches in Google and trial and error you will reach your goal certainly. This is also how it worked out for me. This blog should help you to save some time to find the suitable solution for your challenges. I picked some standard use cases that the most implementer will come across when creating an Analytic Application.

Each part of this blog will cope with the following cases:

In my use case, I want to create an application, where the user can enter their steps and activities they did per day and compare to other users. This will be a kind of activity challenge in the end. In this part, I will shorty explain how to read and change the properties of a dimension in SAC. This is needed right at the beginning to identify the user, which is opening the Application.

If you have an SAP BW background as I do, the requirement to read the master data of a dimension sounds rather easy. And it is even easy, if you know which objects you need to create in your Analytic Application as for example a Planning Model and if you are familiar with the syntax.

The Team is used for a Hierarchy which is called H1 and the Technical Name equals the System User.

As I know the system user of the user currently running the Analytic Application, I want to get the Member ID for this user to filter my charts on this specific user.

1.2.    Create a Planning Model in the Analytic Application

Of course, we could also use a local variable in the script. However, I chose a global Variable to reuse it in Analytic Application. Once it is filled, it will have the same value during runtime.

In the Outline go to the section “Script Variables” and add a new Variable of type string. 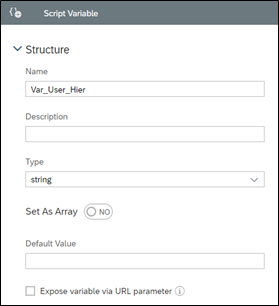 As I am filtering on the User, I want to do it right in the beginning of running the Analytic Application. To do so, I add the coding onInitialization of the Canvas.

Here, I add the following coding:

//get the system user

//get Properties of Dimension “User”

//set the filter on User

When initializing the Analytic Application now, the System User is taken, the respective ID is derived and the Chart_1 is filtered on the derived User.

Now that we know how to read the Master Data, I am going to explain how to change it from the Analytic Application with the help of scripting.

Next to the ID, the description, the Team and Technical Name the Dimension also has a property which is called ‘Target Steps per Day’ (TargetSteps).

In the Analytic Application I would like to enable the user to change the number of steps, which is saved there, on their own. To do so, the Planning Model as introduced in 1.2. is reused again.

A new Popup can be created by clicking on the Plus symbol right next to “Popups” in the Outline.

On the Popup, I added an InputField which is called Input_ NewTarSteps.

I also enable the Buttons ‘OK’ and ‘Cancel’ on the Popup.

I want the Target Steps, that are entered in the Input Field to be saved, when the user clicks on ‘OK’ in the Popup.

Before adding the script, I also created a variable, which is called g_properties and which is of type ‘PlanningModelMember’.

Now, I add the coding as OnClick for the Popup.

//only execute script if the user clicks on OK

If the user enters Target Steps in the Input Field and presses the OK button, the Dimension ‘User’ will be updated in the background.

Now I can easily filter the Charts and Input Fields in my Application to enable the user to enter his/her steps and activities and to set user relevant information as for example the target steps for themselves. In the next part I will shortly explain how to hand over parameters from an application to a Data Action. 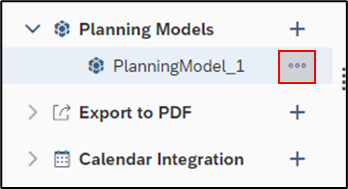 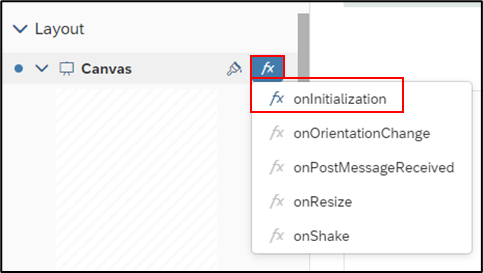 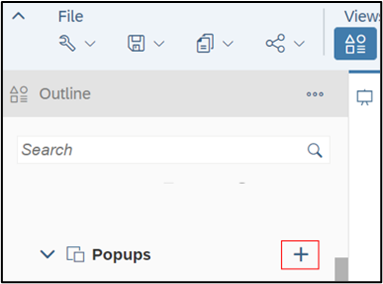 Just one point to note is that the getMembers method only returns the first 200 members for a dimension by default. In your example with only 3 records this will of course work fine, but as soon as you exceeded 200 members you would need to increase the threshold. You will however begin to notice a degradation in performance. Also as the number of members increases your loop will logically also take longer to execute.

As mentioned in the SAC Developer Handbook, it is suggested to use getResultSet() instead of getMembers for performance, however this then assumes that the value you are looking for is in fact in the current result set.

Taking this approach, you could include a hidden table in your application, containing just a single measure and the required dimensions in the drill state.

For the example script below I have used a standard BW Live model (not a planning model) based on a query essentially over 0EMPLOYEE in BW. Field references are adapted accordingly. This assumes a 1:1 relationship for the Username > Employee record. Script would be as follows:

The benefit is that there is no record limit to this approach as there will always be for getMembers. The data is being first filtered by BW with setDimensionFilter and the result set will only include the matching records. This has a secondary benefit in that you then don't need to loop through all the members to find your match.

Finally, you can potentially add further small performance gains by changing the Data Refresh property on the working table to 'Refresh Active Widgets Only'. This will still refresh the data when you call the getResultSet method on the table, but most other story interactions should not cause a data refresh / server roundtrip.