With another SAP TechEd in the books, many (back channel) conversations I participated in and podcasts I listened to turned into controversial discussions about the No-Code/Low-Code news. Especially among the veteran techies in the space…

So, in today’s post, I’d like to do a bit of “myth-busting” and address some of the common misconceptions out there. But before we jump at the topic, maybe a bit of a disclaimer: I’m not gonna talk about technologies or pros & cons of individual platforms or toolsets today, but rather on more general topics. Still with me? Then Let’s get to it… 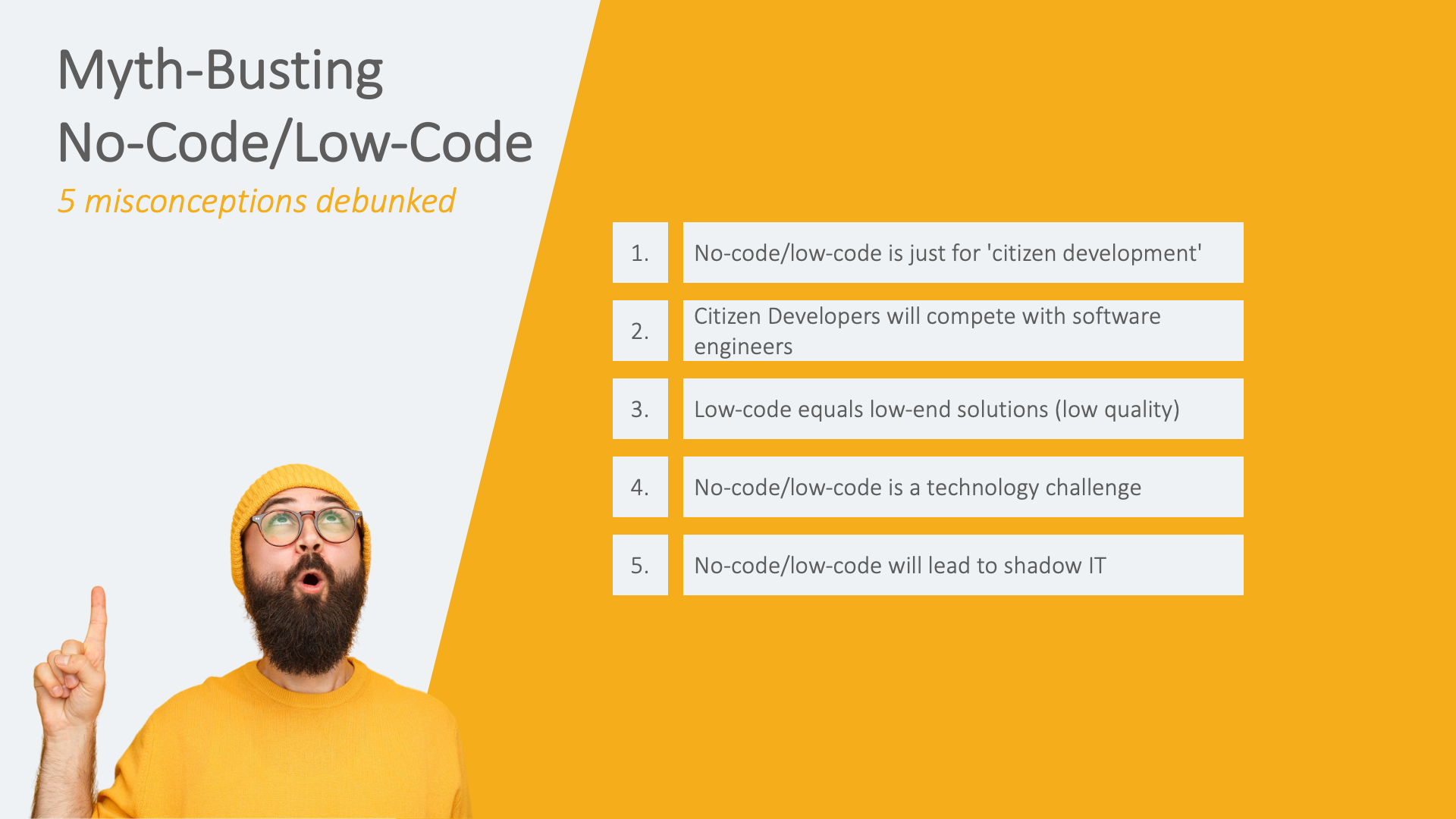 No-code/low-code is just for ‘citizen development’

One widespread misconception is that No-Code/Low-Code tools only address ‘citizen developers’, a term that refers to tech-savvy business professionals without an engineering background. You know, typically those power-users who have profound knowledge about business processes and don’t shy away from using tools to ease their lives – e.g., creating complex excels etc.

In recent times, marketing campaigns driven by enterprise vendors may be more focused on this aspect. Still, we could equally well just use the “rapid app development” label, which may not be en-vogue anymore, but is actually closer to the actual value proposition such platforms provide: quicker development cycles -> faster time-to-value.

And, let’s be frank: developers always face ambitious timelines, so every added productivity gain is welcome, no? So, the critical question is: how can such platforms make (professional) developers’ lives easier without constraining them? It needs to be done with empathy for the mindset of software engineers and with a profound understanding of how developers tick: by giving them tools they actually want to use, made by enterprise developers for enterprise developers.

We all know the 3 virtues of developers: laziness, impatience, hubris. A good rapid app development platform caters to this by making repetitive and dull tasks easier (or even obsolete) and allowing developers to focus on the interesting, may I say value-adding, aspects.

The idea that citizen developers with the right platform can replace professional developers is nothing but non-sense and probably the #1 reason why many senior people in IT simply call the whole thing out as marketing BS. So, let’s be clear… the types of applications composed by business users with no-code tools are different from what professional developers develop.

Let me give you an analogy: if you want to build a house from scratch, you’re well-advised to hire professionals. Yet, many skilled people will be able to set up a drywall or fix a broken kitchen sink themselves – with a bit of craftsmanship and the right tools. And with the shortage of handymen, those that can handle a bit of DIY will not have to wait or pay a premium fee.

The same is true for citizen development. In many enterprises, there’s the need for fit-for-purpose apps to be used day-by-day by individuals or teams. Yet, IT is constantly overloaded and focused on priority #1 topics (oh, and continuous system consolidation, etc.). The consequence: many valuable apps never see the light of day. This is the space where no-code/low-code platforms can be: with the right platform and a proper governance model in place, citizen developers can scratch their own itch without depending on IT and without creating shadow IT (more on that later!)

The 3rd misconception is that no-code/low-code toolsets produce solutions of lesser quality or introduce more technical debt. The opposite. The next-gen of said platforms primarily boost developer productivity by offering re-usable, modular components or application building blocks (avoiding the need to reinvent the wheel and providing guardrails). That leads to more consistency – both technically (stack) and visually (digital experience, branding).

Simply put, an excellent rapid app development platform facilitates the industrialization of app development based on a platform and a stricter governance model. Looking at the automotive industry, such an approach results in higher(!) quality and improves a companies’ ability to scale production. Now, great platforms do not only provide UX or app templates for well-known app archetypes, but even use templates by reference (meaning you can adapt the underlying template, and all apps using it are automatically updated as well.)

An important aspect is that no-code/low-code platforms that cater to enterprise software developers should not introduce new technologies or development paradigms but must be fully aligned with the technology strategy of the ecosystem they target. That’s often done wrong, and well… forcing developers to use disruptive, obtrusive tech is not a good strategy for mass adoption or keeping a low TCO.

No-code/low-code is a technology challenge

In my experience, technology is hardly the problem when it comes to adopting new innovative ideas. Usually, people’s mindsets and corporate culture are much harder to change. All the misconceptions about the maturity level and target use-cases for no-code/low-code platforms – especially among the techies – need to be addressed in a constructive dialogue.

So, for no-code/low-code development to fully maximize its potential, the role of IT department needs to change: from gatekeeper to enabler. Let’s be frank, the whole purpose of such platforms is to reduce the load of IT and to reduce the LOBs’ dependency on IT.

Ultimately, the whole topic of introducing a ‘citizen developer’ practice requires a rethinking of how software is developed. We learned that separating development from operation was a bad idea, which led to DevOps. Now, how about the idea to staff cross-disciplinary teams, including the business experts (!), instead of dismissing them after the initial design thinking phase. (By the way, Gartner is heavily promoting this idea, referring to it as “Fusion Teams”.) I believe that this makes perfect sense, and is well-aligned with the thinking around microservices and the team owning a service/module/product across the entire life-cycle.

No-code/low-code will lead to shadow IT

Introducing such a platform without involving IT will only result in shadow IT: increasing technical debt, TCO, and ultimately it will fail. IT needs to provide the application building blocks to be used by non-engineers in a business in a meaningful context (e.g., translating technical things such API endpoints into data sources with business semantics). IT needs to provide a catalog or marketplace where people can discover all the components they can use. And most importantly, IT needs to introduce and cultivate a collaboration & governance model to ensure that

a) all the non-functional requirements are met (such as information security, data privacy, archiving, etc.) and

I’m looking back at 20+ years in this industry and spent more than 17 years at SAP: the first decade as a software architect leading custom development projects that combined SAP and open-source technologies, and the other seven years as an early member of the original SAP Cloud Platform team (nowadays called SAP Business Technology Platform).

I’m a software engineer by trade who moved into a product management role. Nowadays, I’m working for Neptune Software, an SAP partner and customer that provides an SAP-centric no-code/low-code platform.

Nice one Matthias Steiner - really like the points you raise here and would also be good to discuss the scenarios where Low-Code/No-Code would be better off being used as opposed to custom development however as you state in the first myth buster seasoned developers could use the tools as well to skip the more mundane repeatable aspects of software development. I daresay the tools could be used in every case! In my experience developers do like to feel in control of their code and actually enjoy writing it so will be interesting to see the intersection of this ideal with the low-code/no-code tooling.

The topics around governance are really key here - IT and Business groups should look at this as extending the overall IT function with the goal of meeting more business requirements. IT are typically called out for not getting to all of the items businesses generally want. Collaborating on low-code/no-code tooling may be a way of bringing IT and Business a lot closer together which would potentially boost productivity and efficiency from both groups. Would be good to see this happen generally across the board!

Thanks again for your insight and definitely an interesting topic!

Thanks Phil for chiming in and happy to hear you seem to be on the same lines as me. Let's keep the conversation alive to bridge business and IT!