Getting BTP resource GUIDs with the btp CLI – part 1

Learn how to use the btp CLI to determine resource GUIDs in your global account. This post is part 1, covering the bgu mechanism.

Update: the second blog post in this series is now also available: Getting BTP resource GUIDs with the btp CLI – part 2 – JSON and jq.

In the Developer Keynote during SAP TechEd, specifically in the Command Line Magic section, I used a little mechanism I called bgu (for “btp GUID”), to determine the GUIDs for various resources (a subaccount, and later, a directory) in my global account. Here you can see bgu in action:

In case you’re interested in re-watching this section of the Developer Keynote, there’s a link in the Further reading and viewing section later.

In this post I explain what this bgu mechanism is and how it works, because it may be useful to you too. Moreover, the background information and context should provide you with some extra knowledge about BTP and the command line interface tool, btp.

Starting at a high level

The bgu mechanism is actually a function in my shell environment, which calls a script called btpguid. This in turn uses the btp CLI to examine the global account’s resource hierarchy and pick information out of it – specifically the GUID for a given resource name. Let’s break that down.

We can ask what bgu is with the Bash shell’s type builtin. This itself is an opportunity for us to enjoy a little bit of meta before we start, by asking what the type of type is:

Anyway, enough of that, let’s ask what bgu is:

So there we are, bgu is a function that I’ve defined and made available in my shell. All it does is call btpguid with all of the arguments that were passed:

Then, depending on circumstances, it calls another script (btpctx) to write some info to a status file. This is not relevant here (it’s related to my tmux-based status line in my terminal) so let’s just focus on the call to btpguid.

So what is btpguid? Let’s find out:

So btpguid is a script. Great, let’s have a look at it!

Hopefully the comments provide the general idea – given the name of a resource, say “trial” or “techedhouse”, this script will find and return that resource’s GUID. In addition, if the --target option is specified, it will also set the default command context, but we’ll leave that for another time.

An overview of structure in BTP

Before we dig in to some of the details of the script, let’s just spend a few moments thinking about subaccounts and the hierarchies that can be built using directories.

Basically, within a global account, you can create subaccounts, and you can set up those subaccounts using directories. This is a flexible and simple way to organise resources, assignments, adminstrative access and more using a well understood paradigm.

You can read more about this on the SAP Help Portal in Account Models With Directories and Subaccounts [Feature Set B].

Let’s look at an example. The structure that existed at the end of the Command Line Magic section of the Developer Keynote looked like this:

We saw, very briefly, a representation of this structure in the BTP cockpit too, right at the end of this section of the keynote:

Staring at this structure for a few seconds, we see that it’s made up of directories and subaccounts; the “messaging” subaccount sits within the “techedhouse” directory, which itself sits alongside (at the same level as) the default “trial” subaccount that was set up automatically for me when my global account was created.

When managing these subaccount and directory resources, GUIDs are used. We saw multiple examples where GUIDs are required – here are three of them. However, note that each time, instead of finding and specifying a GUID manually, a command substitution (they look like this: $(...)) is used, to make things easier:

In each case, instead of manually looking up the GUID for a resource, and then copy-pasting that in for the value to use with --to-subaccount, --to-directory and --directory above, the bgu mechanism was used to do that for us. As the manual section on command substitution says:

In other words, when you see something like this (taken from the first example above):

then what happens is that the command bgu trial is executed, and the output is then substituted as the value for the --to-subaccount parameter.

Now that we understand the structure of resources in BTP accounts, we can turn our attention to the heart of the btpguid script. This incarnation of the script, which was used in the Developer Keynote, invokes a btp CLI command (which we’ll see shortly), and parses some of its output:

Let’s break that down so we understand what’s going on.

The first line executes the gethier function which is defined earlier in the script.

In case you’re wondering about the rest of the first line, this is to deal with the situation where you’re not yet (or no longer) logged in with btp, and if that’s the case, you’re guided to log in first, and then the call is re-tried.

I’m redirecting standard error (with 2>) to /dev/null, to get rid of anything printed there. Currently the btp CLI outputs an “OK” to standard error, and I don’t want to see that anywhere.

The --show-hierarchy parameter is responsible for the lovely detail that you saw earlier. Let’s look at an example of that detail before diving into the second line, so we know what we’re dealing with. This example is from the script’s comments above:

Right, so what is the second line doing? From a high level, it’s looking for lines in this output starting with either “subaccount” or “directory”, grabbing the GUID and resource type on the line that’s found, and assigning them to two variables, guid and subtype respectively:

It looks a little complex, but if you stare at it for a few minutes, this pattern emerges:

A couple of “here strings” in the form of the <<< construct are used (see section 3.6.7 of the Bash manual section on redirections). Such “here strings” allow us to supply the value of a variable as input data to a command or builtin that would normally expect to read from standard input (STDIN). If you’re interested in understanding here strings and how they fit in, have a look at Input/output redirection, here documents and here strings.

Knowing this, we can break the line down into parts. The first part is this, inside the command substitution construct $(...):

Here are some notes to help you interpret this:

With that in mind, let’s look again at the pattern, in quotes:

If the displayname variable contains “techedhouse”, then, after parameter substitution within these double quotes (i.e. at the shell level), we have this as the actual pattern:

* those non-whitespace characters will be the GUID

Let’s test this out manually, to see what happens. Let’s assume that we’re looking for the GUID of a resource with a display name of “techedhouse”:

Note that the whitespace and “techedhouse” inside the positive lookahead assertion (i.e. (?=\s+techedhouse)) is not captured and therefore we don’t see it as a third value in the output.

we can better understand what’s happening with the read builtin; let’s substitute the output to see it in action:

In case you’re wondering about the -r option to the read builtin, it’s to stop any backslashes in the input being interpreted inappropriately. I wrote about this in a recent post on my Autodidactics blog – see The read command section of Exploring fff part 2 – get_ls_colors.

Wrapping up this part

We can see how the power of the Unix Philosophy helps us prepare, run, and handle output of executables on the command line. Here we put together just a few lines to help us level up and be even more efficient, by allowing us to determine our SAP Business Technology Platform account’s resource GUIDs with zero effort, and use those determined GUIDs in the context of other commands.

In part 2 we’ll learn a little bit more about the Unix Philosophy and then examine alternative output formats for complex data structures and relationships; formats that are more predictable and – with the right tools – more reliably parseable.

Here’s a quick list of resources that you may wish to consume, relating to what you’ve read in this post:

The second blog post in this series is now also available: Getting BTP resource GUIDs with the btp CLI – part 2 – JSON and jq. 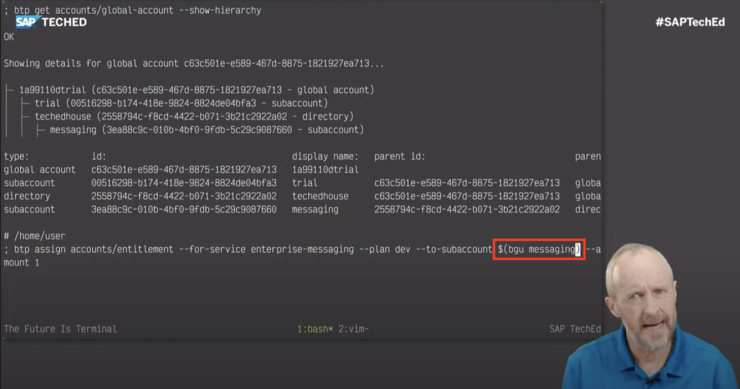 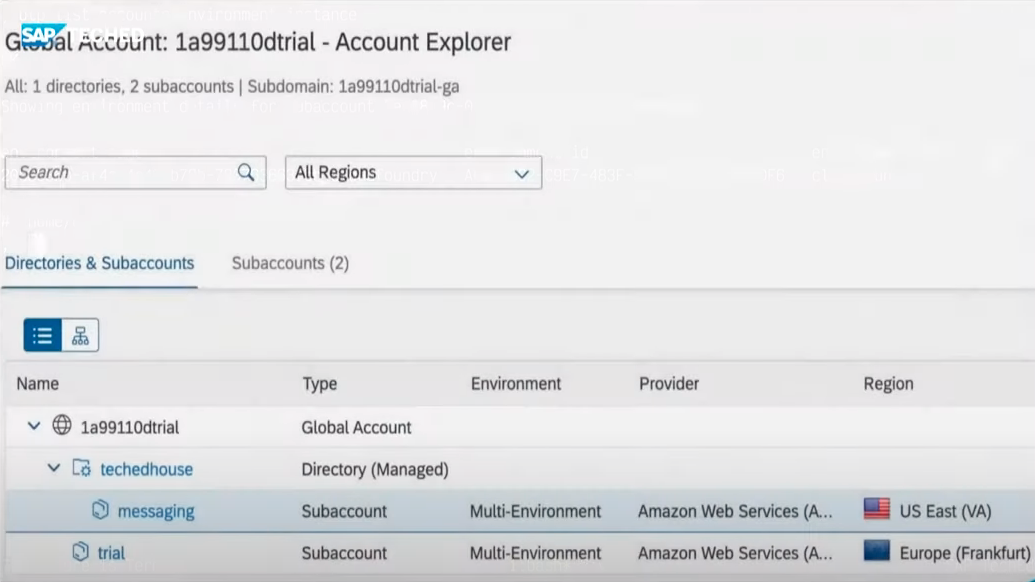 Thanks DJ for this wonderful explanation of your bash script. I learn so much from you 🙂

You're welcome, Helmut! It makes me happy that folks like you are discovering things here.

Out of habit, I would normally also comment out the blank lines between sections in a long multi-line comment, but looking at your btpguid script, I actually quite like the look of not doing it.

Thanks Morten, I love the attention to detail in this comment! I've always wondered about whether I should or not, but I agree with you, not doing it makes the sections stand out a little better.

We have a requirement where in  when the Business Partner  is getting created we need to default some fields to some constant value .

In earlier days we used to implement Badis and User Exits .

Now most of the blogs speak how to add extension logic on BTP  , that consume the event  after the Business Partner has been created or changed .

But if we want to write the logic in BTP  which would be execute during  the Business partner is getting created (not after rthe Buisness Partner is  created .

Can we achieve this kind of functionality using BTP .