How to use Early Numbering with Semantic Keys – RAP Managed BO

In my previous blog post, I discussed how to use Late Numbering in RAP Unmanaged Business Object.

If you are new to RESTful Application Programming (RAP) model, then this blog post by Carine Tchoutouo Djomo is a great starting place.

For this post, I assume you have some knowledge of RAP, Core Data Services (CDS) views and so on.

Source code for all artifacts including tables and CDS views are available in this GitHub repository.

If your Business Object has GUID based keys, then you can use managed early numbering. It is managed because RAP runtime engine generates and assigns values to primary key fields.

In this post, I am going to discuss unmanaged early numbering.  It is unmanaged because:

This demo business object, called the “Document”, named so for the lack of any kind of creativity on my part, has 3 tables:

Here are the CDS view entities where ZDH_MngdDocumentHeader is the root entity:

When you generate the BDEF, it would look like this initially: 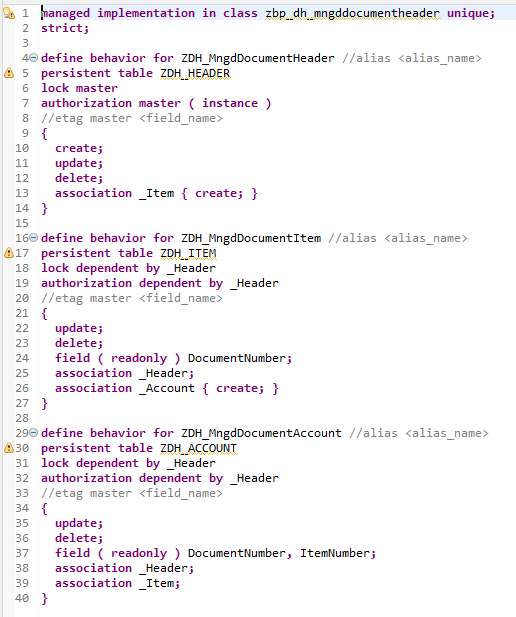 Let’s add some more details to this BDEF such as “alias” for each entity, authorization, etag and lock.

This is done by adding the keywords early numbering for each entity that needs to implement this.  Notice the highlighted lines in the BDEF below: 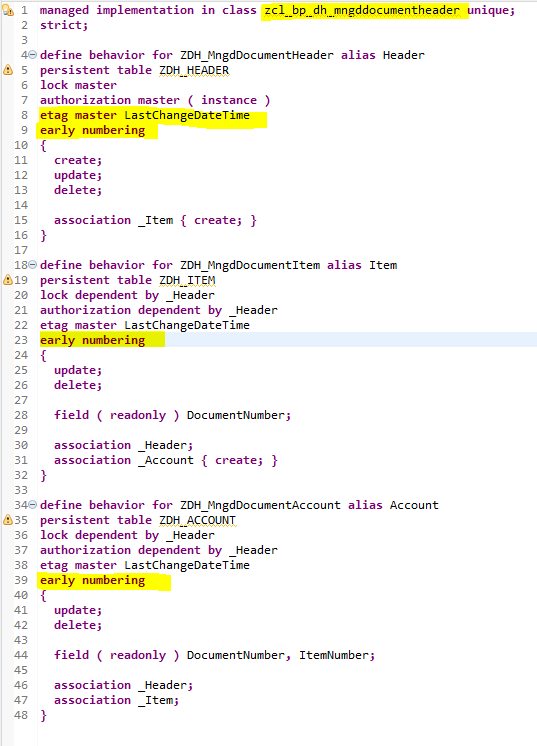 Since, field names in tables and respective CDS views are different, you also need to add mapping for each entity.  It looks like something like below.  Refer to GitHub folder for complete listing.  This is not required for early numbering, per se. 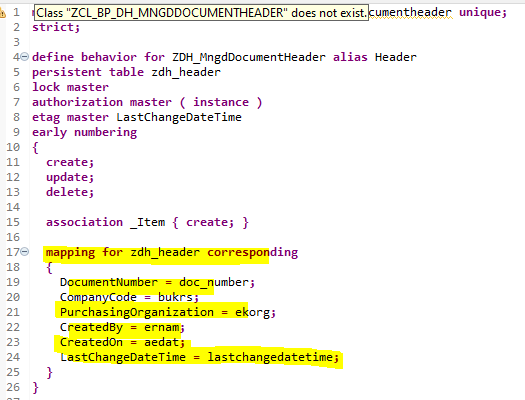 Activate BDEF and then use quick help to generate the BIL class.  It should look something like this: 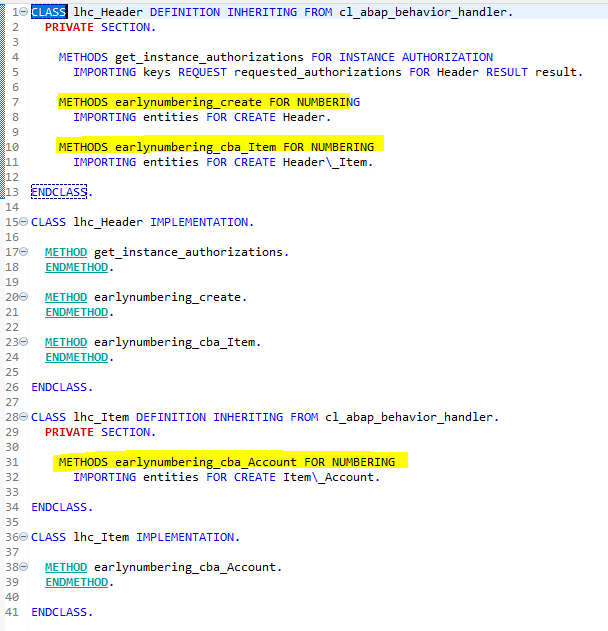 Notice the highlighted methods – for each entity that has early numbering defined, there is a method generated. Notice the FOR NUMBERING in the method definition.

Our goal is to add some lines of code here to generate the keys for each entity instances.

This post is for educational purpose only.  It is to demonstrate “how” to implement early numbering. Therefore, numbers are generated in a very simplistic manner.  In a productive implementation, you will want to draw these numbers from Number Range object.  How to do that is not in the scope of this post.

Also, note that, when keys are generated early in the interaction phase, validation failures in the later phase may cause gaps in the numbering.  Therefore, if gap-less numbering is important or numbers need to be sequential, take extra caution while using this method!

I created this class ZCL_DH_MNGD_DOCUMENT_HANDLER which has 3 methods:

In EARLYNUMBERING_ methods of BIL class, for each created instance (%CID), generate a new number and then fill “mapped” parameter.

These methods are called before any determination ... on modify { create; } are called

In EARLYNUMBERING_CBA_ITEM method, we are filling MAPPED-ITEM by calling GET_NEXT_ITEM_NUMBER() method.  Notice that we are passing the DocumentNumber to this method which is available in the importing parameter entities:

Similar logic is implemented in method EARLYNUMBERING_CBA_ACCOUNT as well.

Apart from this, we have also added a determination for each entity in our BDEF named Defaults to fill administrative fields such as CreatedBy, CreatedOn.  Complete listing of BIL class as well as ZCL_DH_MNGD_DOCUMENT_HANDLER is available on the GitHub repo.

Let’s test it by writing an EML test.

Below EML will create 1 document with 1 item and 1 account line. Use valid company code, purchase organization and cost center depending on in which system you are writing this:

You can find complete test implemented as A Unit on GitHub repo.  This listing should go into “local test classes” of our BIL class.

That’s it for this post.  I hope this was helpful.  Let me know in the comments how I could improve this post.

Thanks, it helped me a lot!

I cannot use early numbering in my managed behavior , i do not know why .

using early numbering and strict is possibel only on BTP (cloud) ... for on-premise systems it is not allowed ...