Last year’s TechEd was a complete miss for me (for reasons obviously private/irrelevant); this year’s SAP event was unlike any other for me. The virtual reality of it reflects the world state.

With access granted to me by the SAP Community Champions program, and a little work on my part, I was able to attend a few sessions of widely divergent character. Along with others identified as influencers, I watched both keynotes via a Zoom meeting (figure 1).

I felt some gratification when I saw Rich Heilman join the TechEd keynote, when I recalled he and others had been set adrift in an unfortunate but shortly remedied restructuring. In contrast to the ever-ebullient Thomas Jung, Rich sets a serious tone, from the gravity of what he presents to the drollness of the code. “Steampunk?” OK, fine, whatever titles or tags need to be assigned to the works underway.

I also heard during the keynote a litany of timely major global challenges from climate to health to equity. Were there further details on solutions to these problems? I didn’t hear much in the few sessions I attended, a tiny fraction of the whole, so I would not presume to be a definitive no. Below, I will try to analyze the implications of one example of “the internet of things” relative to biological, chemical or similar environmental metrics. Alas, only reading the numbers doesn’t fix a runaway system.

You might notice a large orange and white rectangle below the screenshot of the two-person keynoters. The fine print says “Invalid Attendee Code” with no other context except an alphanumeric string and an arrow pointing to the right. Was I supposed to click that? Of course I didn’t, expecting some sort of rogue code had snuck into the data stream. Bad, bad error trapping and recovery for users. Unpleasant?

In figure 4, the orange box continues. I was logged in, I certainly thought, because above that in nearly illegible dark blue font on a black background is a message saying “LOG OUT”. The session was quite interesting, and the missing feedback/live authentication was minimally distracting.

In Figure 5, we get to one of my highlights, a process diagram starting with a measurement apparatus, data feeds with integration and other transfers, along with the requisite bucket-load of iconic (literally) buzzwords, like CloudFoundry Runtime, Cloud Integration, SAP Analytics Cloud, and, there it is ,SAP IoT.

For DBAs and data scientist types, below that there are virtual tables, stored procedures, calculation views, and even further below, in the underground invisible infrastructure is identity authentication and identity providers (out feeds, not in feeds?)

Zooming in to the left side, in Figure 6, I’m showing 2 physical devices, in comparison to the other flows and containers being shown more virtualized, these are low-rez images of meters and analytical devices

Figure 7, the data lake presentation. I tried to multi-stream along with “channel 1”. It’s much harder to present to a camera eye than many human eyes, even after these long months of isolation. How much did I learn about HANA data lakes this way? I probably retained less than half of what I might compared to a an in-person session. However, I was fascinated by the coverage of what I believe they called “SQL data files”, which I take to mean an entire database in a single file, much like the classic dBASE II (and descendents) DBF and more current relatives like the SQLite found under apps like Beet, UNIX man page indexes, etc.

Figures 8 – 11 are my workshop experiences. To be candid, I shot myself in the foot scheduling this heavy tech session late at night, and going for a meal prior. Be that as it may, I’ll comment on how I did, knowing other workshoppers perspective will likely be different. I’m not current on SAP “new products” as I’m not in a large IT shop, and not too interested in trying all of the available online courses and trial options.

Provisioning student sandbox environments has been evolving from on-premise, to virtual systems, to cloud-based, just as the enterprise products also evolved. But a student typically would just be presented with a logon string and password pattern, so the initial setup in class was seamless, sometimes happening before that first cup of coffee was even cold.

This year, I was instructed to go sign up for a cloud-based personal trial software application environment. As with every other “new” account provisioning I’ve ever seen, you navigate new screens you may never see again, as a gatekeeper to getting on to learn about the course content (which is data governance, not instance provisioning).

Was I at the end of the class in speed and understanding? Probably. And I didn’t care to ask for help, as I might have been able to do in person with another attendee. Just a simple hand-raise was more daunting online than it would be to wave in person. Again, for me.

I put a couple messages into the text; in on case I went off the rails from the available menus. I was quickly and politely checked. The main presenter had virtual help, as would happen in a conference setting. Much of the help was around scope more than technical issues, though if someone went into a private chat room for the latter we may not know. I didn’t feel a big need to take up the help time, so didn’t. Glad to know that was an option. If I had been more awake (the class ended at midnight for me; I don’t know how those in Germany made it) I would have tried the “desk share” attempt. My internet connection is pretty good, but my personal laptop is beyond its useful lifespan for multiple screen work.

The lockout of my class instance was pretty spectacular; I did hear that I wasn’t the only one. I can’t take 100% of the fault for the user identity role provisioning not working. It did lead to a frustrating start to the class, cause delays, and since I didn’t bother the team to get around my mistake, I could not manage the remainder of the exercises. I could watch the tutor, and review the chat for where things were tricky.

I believe I have access to the trial set-up for a month, and this could be extended on request, maybe.

One positive feature of the online workshop was the availability of documentation through github. In the past, you’d get a paper showing screenshots and detailed step-by-step instructions. Then in an effort to reduce paper waste, the documents were distributed digitally but available in the session room context only. With a virtual room, the documents were there outside the online session, yet easily found with the correct link. Someone saved us from having to type the URL from the onscreen display by dropping the link in the chat.

For developers tuned into the contest, the drum roll and winner announcement was probably exciting. For the rest of us, not so much. I guess the video/photo flashbacks were all we could expect from a virtual conference. I had heard a flash mob SAP jam band was being considered, which might have been a hoot.

With the last screenshot, I can see what the ominous orange rectangles should have been showing me, namely, a place to enter questions and see answers to others’ questions. 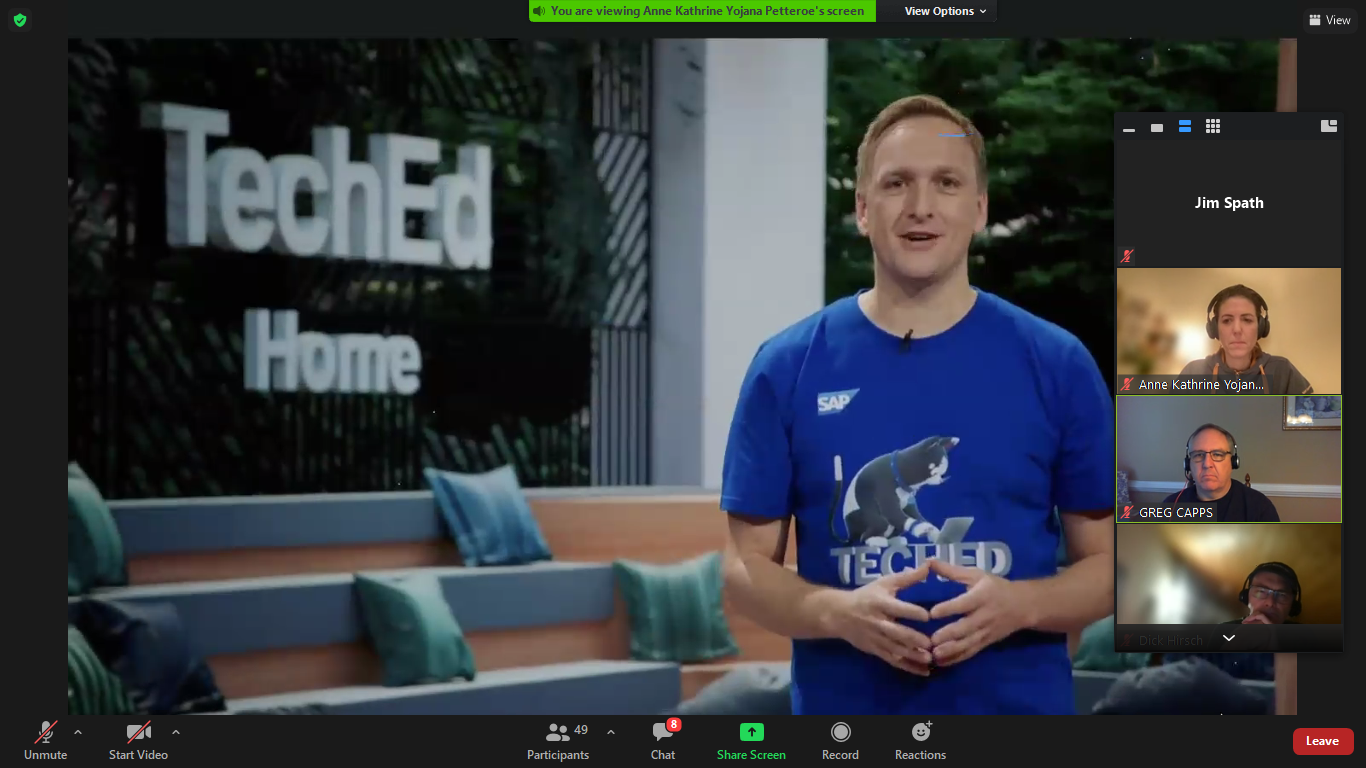 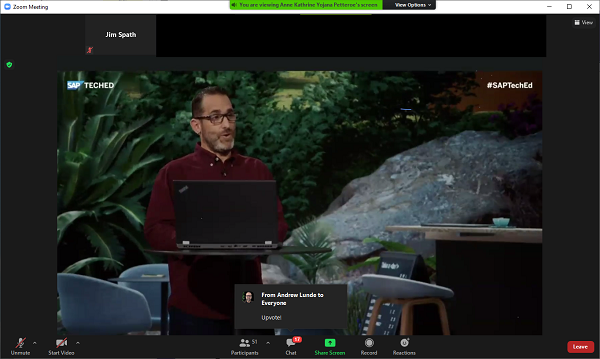 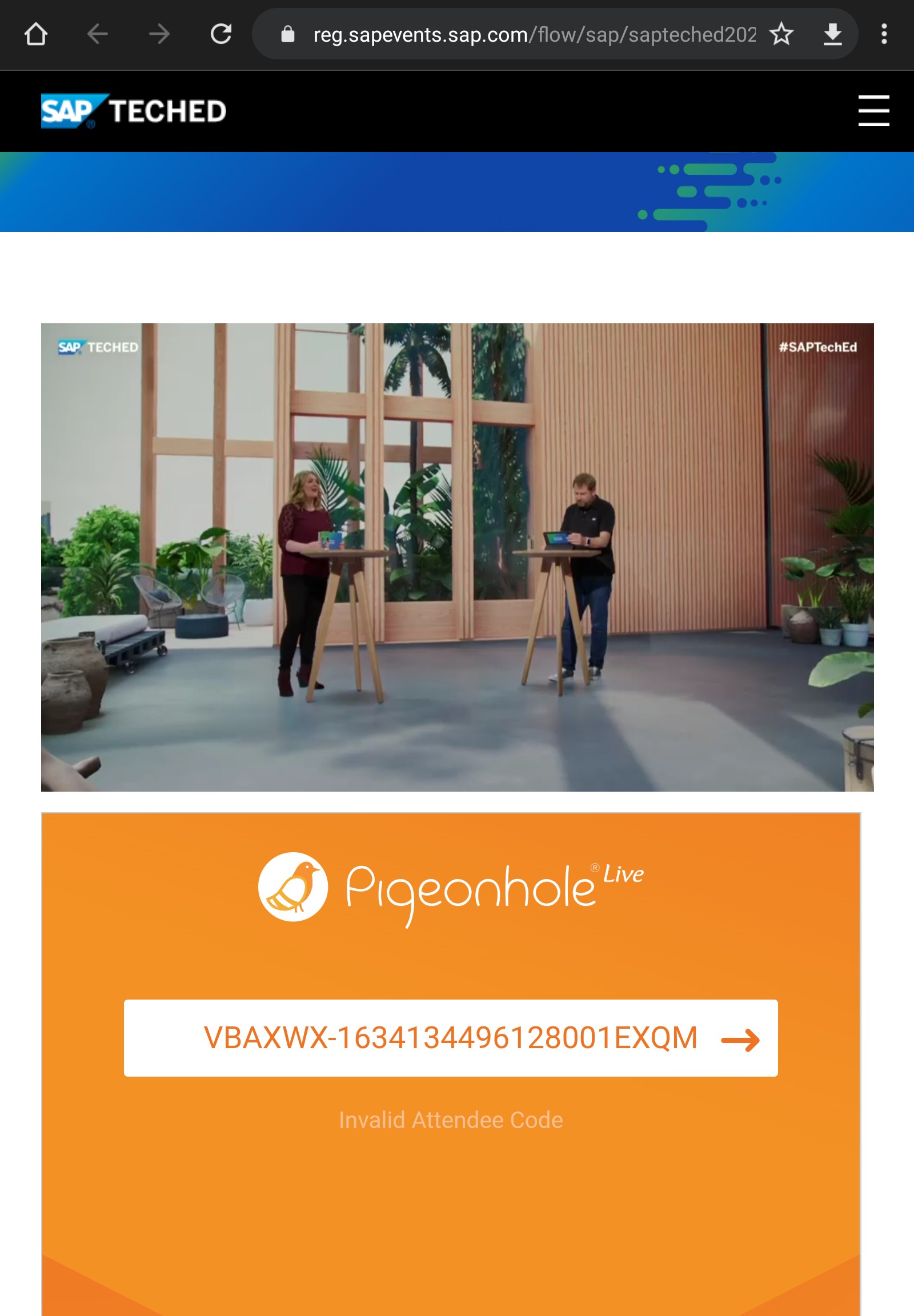 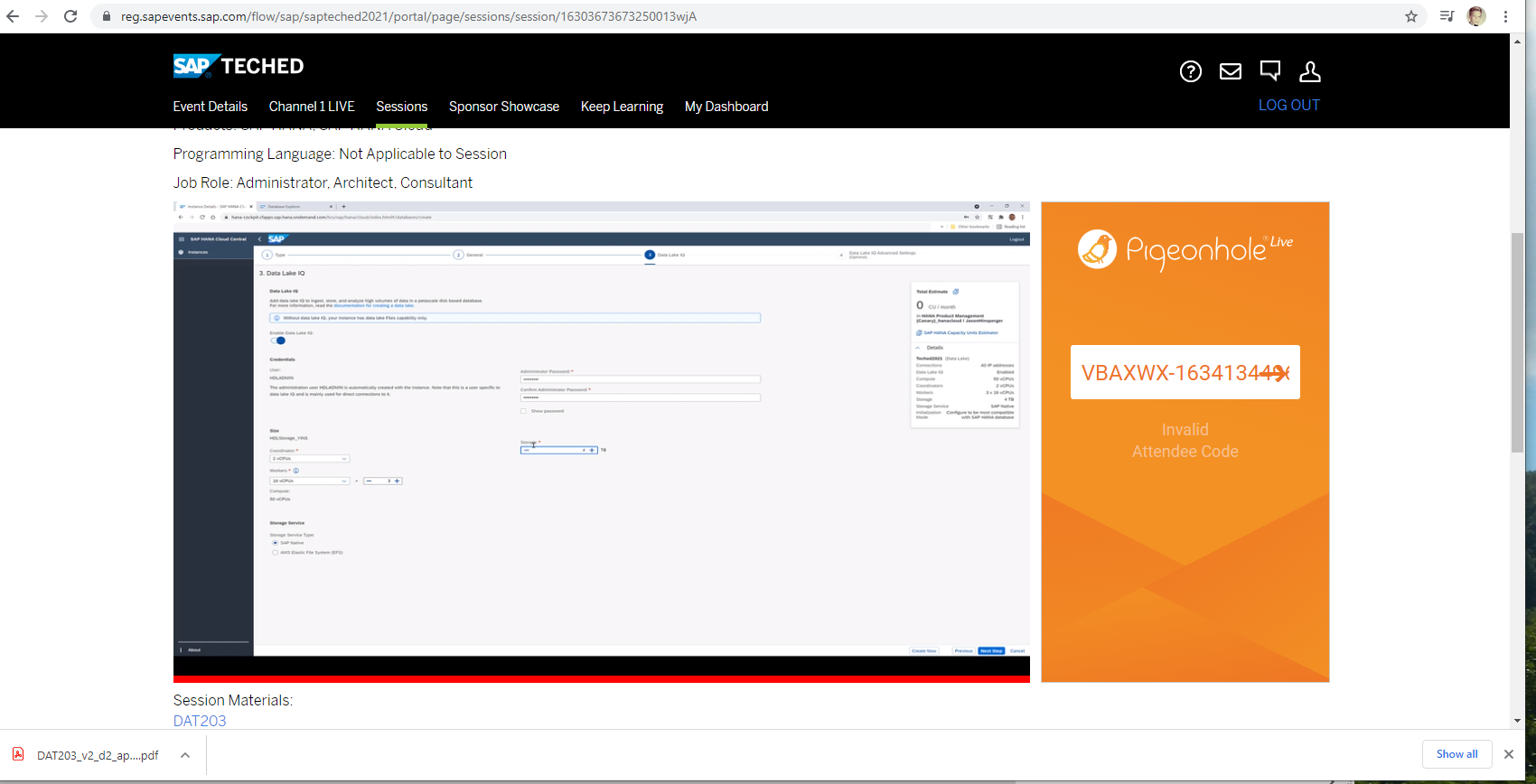 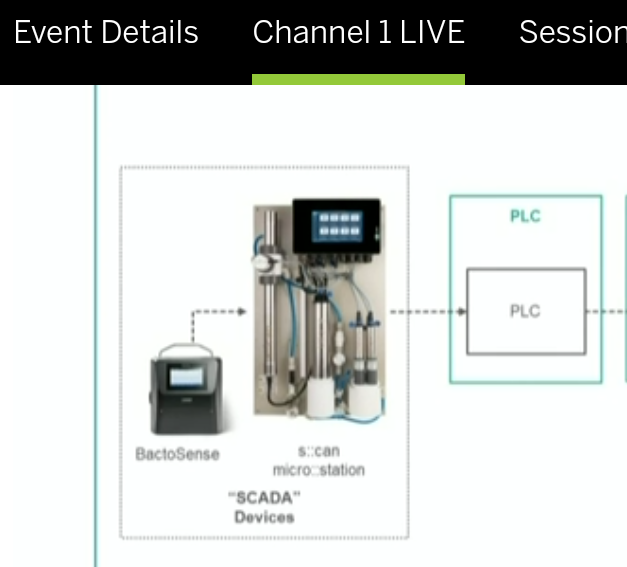 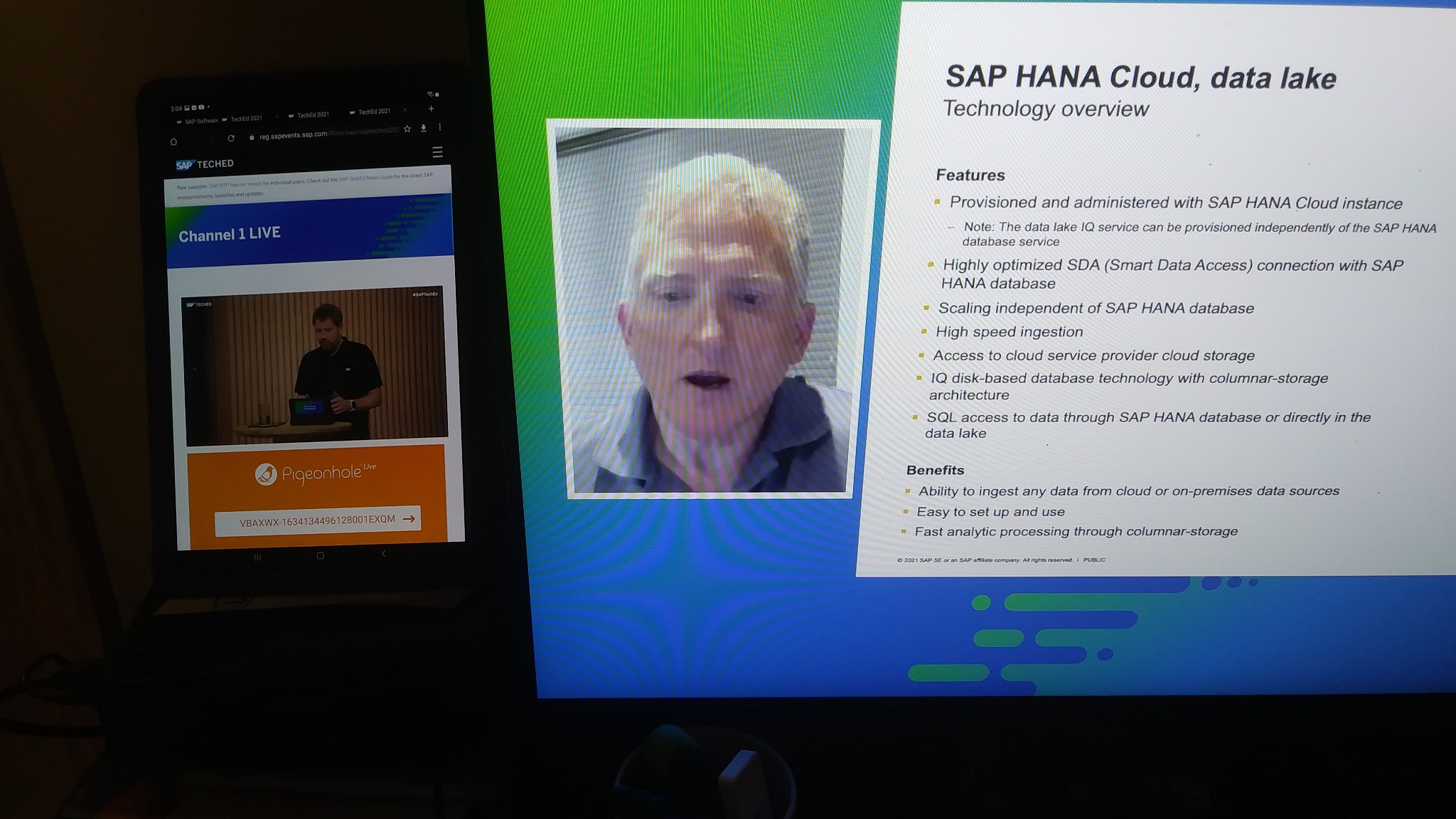 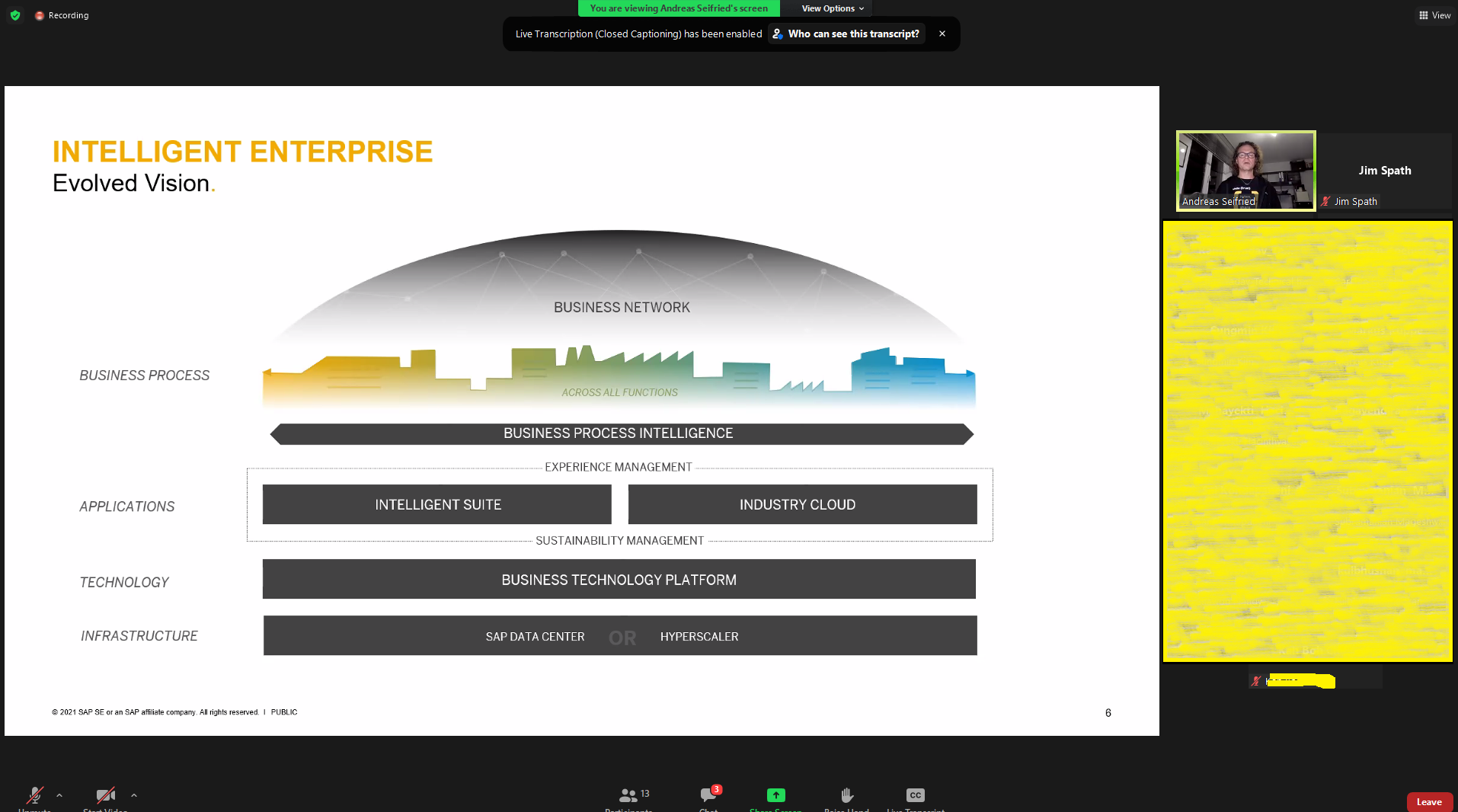 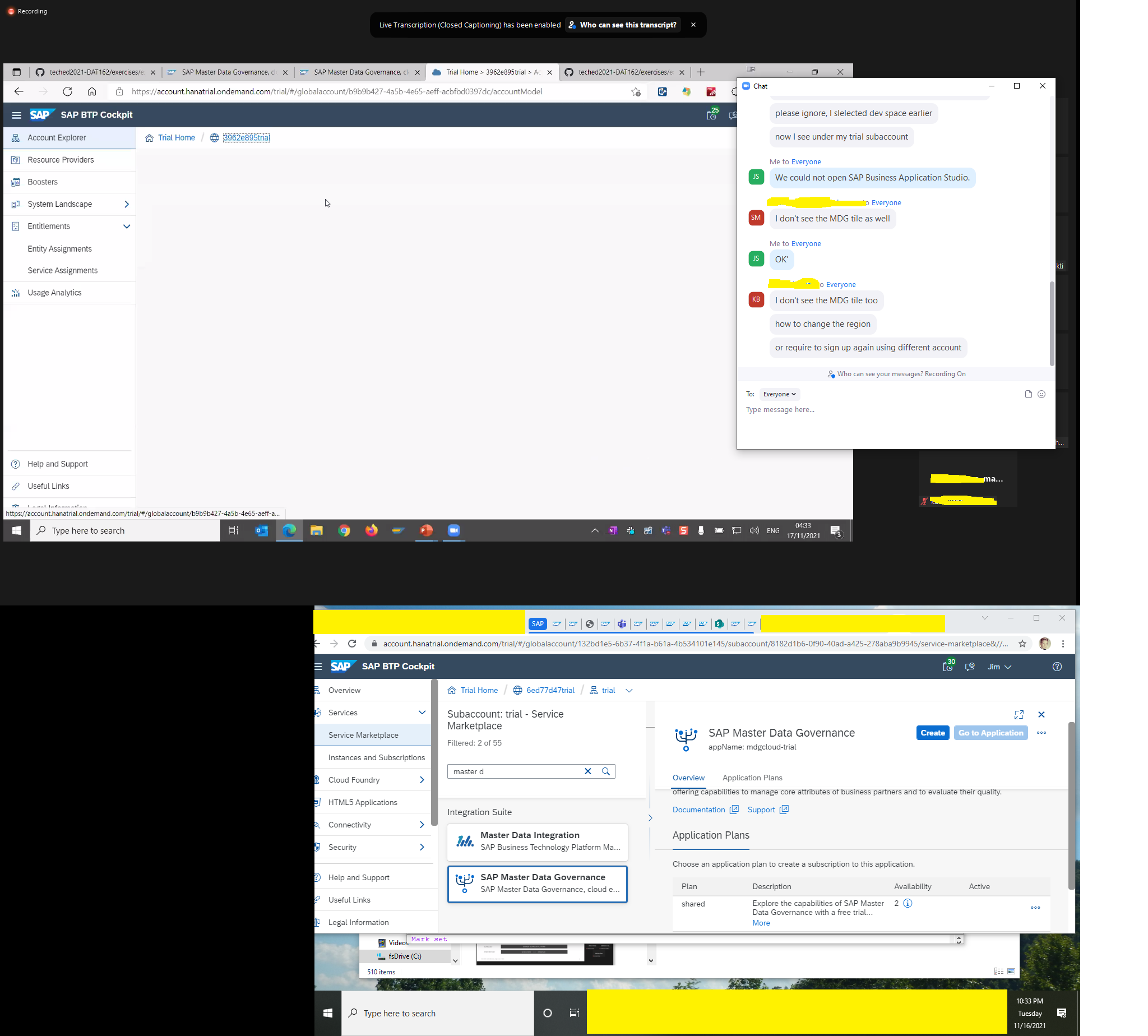 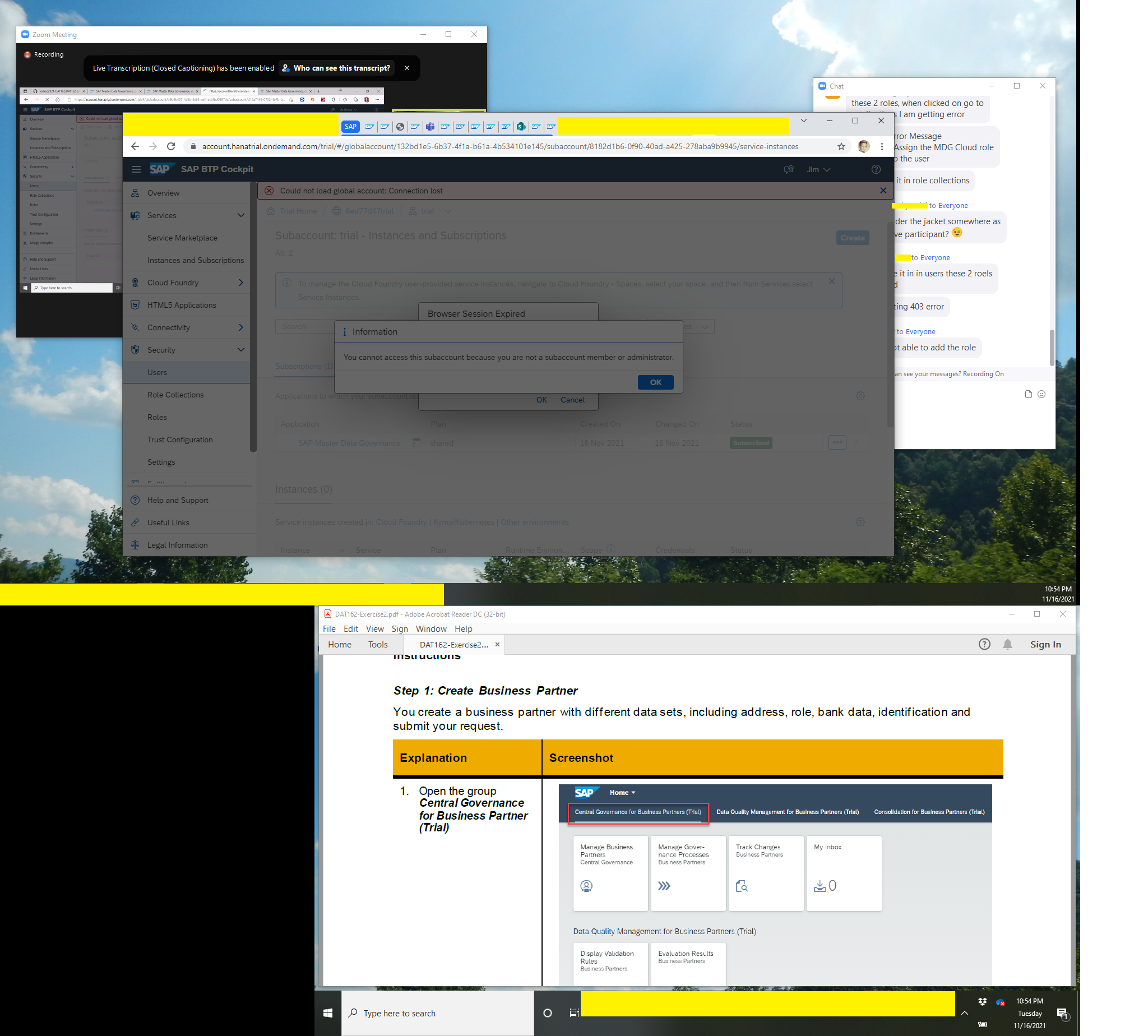 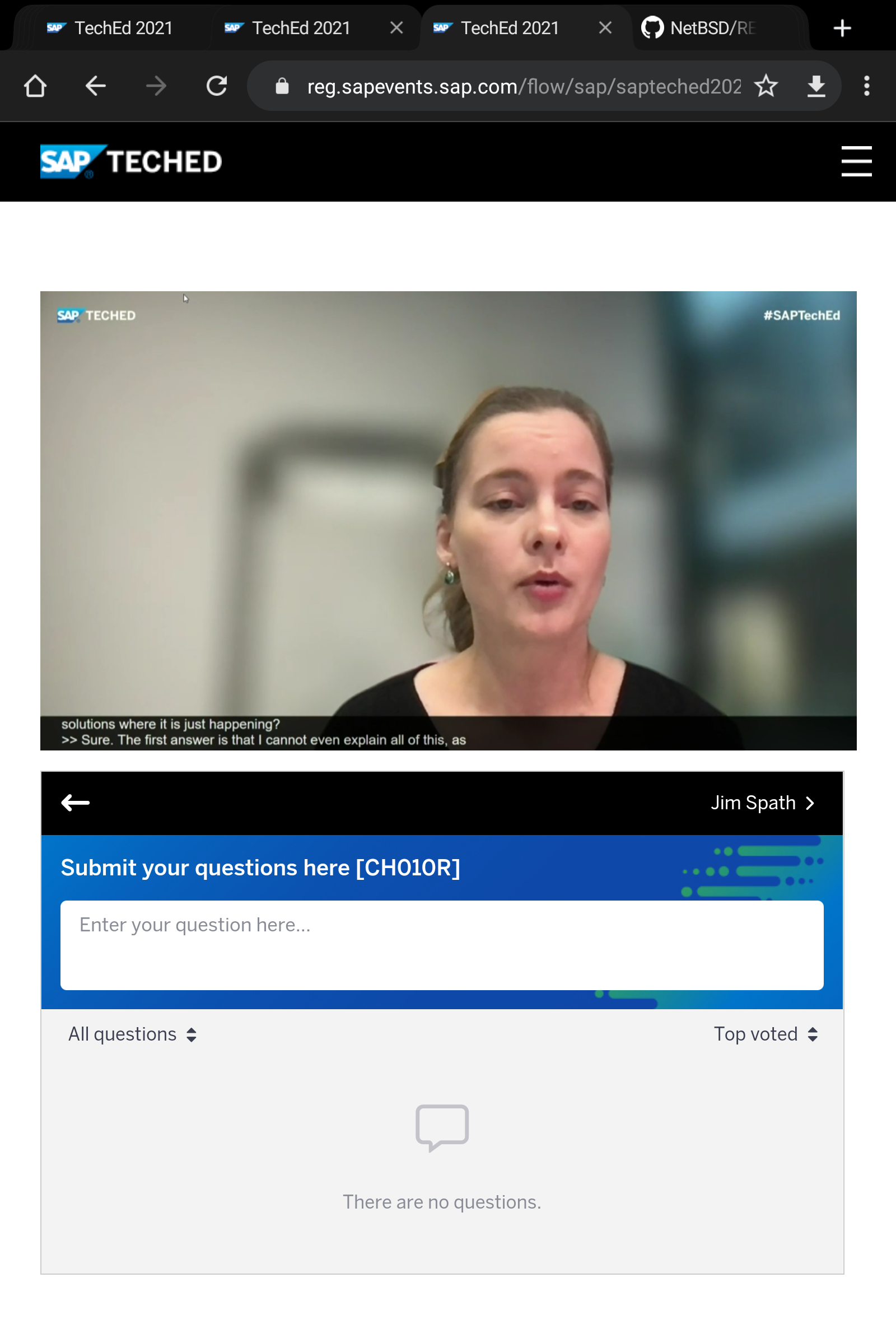