I can see ABAP Moon Rising – Part One of Eight

NARRATOR: There are two horrible crime’s about to be committed. One is murder most foul, the other the release of a new ABAP related book and associated musical. It is difficult to say which is worse but this series of blogs will help you decide whilst singing and dancing and solving a crime and thus winning prizes. PDH: SAP Community Rules are very clear – you cannot use blogs to “sell” anything so if – hypothetically – there was a new SAP Press book about ABAP that I had written – and that book was getting released on the 23/11/2021 then I could not write a series of eight blogs, one a week, promoting it.

What I am allowed to write about however is the mechanics of writing such a book and any funny stories about strange events that happened during the course of the construction and publication of the book.

As you may recall it is quite lucrative to write a book for SAP Press. In fact the reason that Elon Musk is the richest man in the world is nothing to do with Tesla or SpaceX or any of that. The reason he is worth a Trillion Dollars is because he once wrote the SAP Press book “SAP Service and Support“ many years back under a non de plume. That book will feature in the forthcoming murder mystery.

The high spot of any new SAP Press book is the gala party on the night of its publication which is packed full of A list celebrities, and just like the annual Met Gala in New York City tickets cost one million dollars a shot.  Though if for some reason you don’t have one million dollars lying round in your sock drawer the organizers will accept payment in the form of a Non Fungible Token of your right big toenail. NFT’s are generally worth a million dollars, no matter what they represent.

Again you may recall that Baron Frankenstein and his monsters attended the gala party for “ABAP to the Future Part 3 – Fifty Shades of ABAP“ and he was so impressed that he offered to host the party for the fourth edition in his own castle as and when that book was published. As it transpires the publication date is 23/11/2021 and thus on that day time portals were set up at various points around the world to take the rich guests to the party at Castle Frankenstein on 23/11/1792.

NARRATOR: But what nobody knew was that on that – fateful – night, there were to be assorted gatecrashers of a most unusual nature….

PDH: When I wrote the first edition of “ABAP to the Future“ I thought I would struggle to find enough new topics to have a meaningful number of chapters. So i wrote a four by four grid and in each square wrote a new technology like BOPF or UI5. I struggled at first but then kept remembering new goodies and before I knew it I was scribbling around the edges of the filled grid, and the problem became choosing what to keep.

With every subsequent edition the question becomes – do any new chapters need to be added, and if so so what needs to be dropped to make way for them?

In this case the “delta“ between the chapter lists of Edition 3 and Edition 4 was as follows:

PDH: There are two types of chapter in the book – the first six deal with what i call “enabling“ technologies such as ABAP, abapGit, database programming etc. The remaining chapters are “transactional“ and deal with business logic and the UI.

In the original downloadable code the first chapters just had programs which were a list of examples of how to solve various problems using the new technologies, and had little relation to the applications in the transactional section.

I always wanted to tie the two together i.e. in the first half you would see how a particular business problem was solved using a new ABAP construct (or whatever) and then later on you would see the exact same code again being used in anger in one of the monster applications.

This would give the book greater “cohesiveness“ in that the chapters would tie together, and seeing the same example twice (or more) would hopefully make the new technique more understandable.

This has proved to be a lot more difficult than I anticipated – each time I say to myself “in the next edition I will ensure 100% of examples are in the applications“ but I never get there. The best I have managed is have a higher percentage of examples in the applications each time. In the places I have succeeded the code in the example program has comments saying in which monster application you will see the same code again.

NARRATOR: There will be more about the book writing process in general, and the downloadable code in particular, in each subsequent blog. Meanwhile, the series of bizarre events which would culminate on that – fateful night – of the SAP Press gala party were already in progress…..

The Narrator – an SAP Expert

Slin Shady – a Hunchback (he is a Czech)

The BAS Street Kids – a bunch of Travelling Showmen

The Monsters – a Chorus Line of Monsters

Appy „Mac“ Gyver – an Investigator, assistant to Code inspector Clouseau of the Surete

NARRATOR: Evil criminal mastermind scientist Dr. Frank Bopf escapes from a maximum security prison on an asteroid in the year 2156 along with his twisted deformed hunchbacked assistant Slin Shady (he is a Czech), for whom he promises to create a new, beautiful body. They flee through time using the BW bridge to the Transylvanian suburb of Glenbrook (Postcode 2156) in the year 1792. Once there, the two encounter and murder the BAS Street Kids, a band of traveling showmen, and take over their horror exhibit. And all this before the story even really starts…..

The guests inside my Castle can

But none were ever stranger than

He jumps on top of a big brown ball (pictured below) and starts singing. 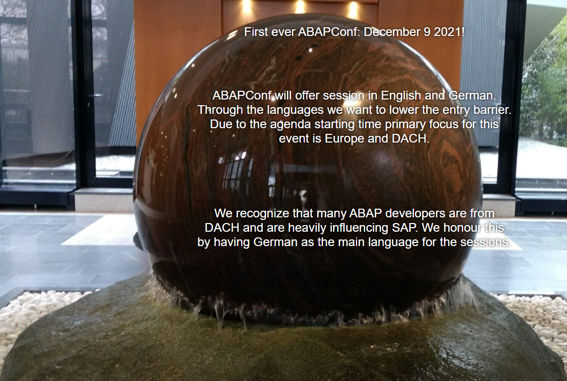 Well don’t go ROUND( tonight )
Well IF BOUND to take your life
There’s ABAP moon on the RISE with SAP, all right

(Jumps off ball – joins a chorus line of Monsters; all do high kicks)

AMG: All is not well. I can feel it in my bones. There is going to be a horrible murder very shortly. I am going to need your help here. The first few people who solve the murder mystery and send a direct message to Paul Hardy (which is a puzzle in itself which many have solved) together with the logic behind your conclusion, will win assorted mystery prizes. As well as identifying the murderer…

This is like a math exam – the correct answer is important but even more important is showing the detailed workings as to how you reached your conclusion. The world being what it is these days the temptation will be to post your answers in comments to one of the blogs or on social media – please don’t!

Alien Sailor: Cheating is not against the rules. It is simply … less distracting.

Doctor: Spoils the fun you mean!

NARRATOR: As things stand it is not looking good for the star-studded SAP Press gala party to celebrate the release of the fourth edition of „ABAP to the Future“. The author has barely begun to explain the mechanics of book-writing, bizarre gatecrashers are on their way to the party, and worst of all it appears there is to be a murder on that – fateful night – which YOU will have to solve! Stay tuned for next weeks episode of “I can see ABAP Moon Rising“

Just saw that the book also covers WebDynpro - can't want to see what is all new and exciting there! The picture of the ball in WDF01 brings so many memories... though somehow the rotating wheel in front of WD03 is more emblematic...

Is there anything new in ABAP Web Dynpro?

As might be imagined SAP is not putting a lot of effort into Web Dynpro anymore. You would expect them to have put no effort at all into it but in fact there were two or three new things added in the last two years. And you still get the "Team FPM" blogs right here on SCN every so often. Nonetheless I imagine this will be the last edition where I mention the technology.

The strangest thing is the vast amount of effort SAP spends adding new features to the SAP GUI given that the message is to stop using it altogether, not that anyone will. SAP GUI 7.70 had tons of new things in it.