Have you ever wondered what impact your consumption choices have on the world? For example, when you are buying a new car, how much employment generation, how many carbon emissions, or how much water consumption does that entail? If you want to take it to the extreme, you could even ask those questions for something as commonplace as ordering pizza.

Admittedly, this might not seem of the utmost importance for you as a private person, but for companies interested in their total environmental, economic, and social impact, it is crucial to be informed about the effects of all their actions, including everything that happens in their value chain. As organizations do not exist in a vacuum but all activities are linked to other entities, a comprehensive impact assessment must comprise the value chain, especially the upstream part, reflecting the fact that they are responsible for the selection of their production material. Consequently, also the impacts generated on the supplier side can be attributed to a company, since the ingredients used are only produced because this specific company demanded them. And with sustainability reporting gaining momentum, the need for organizations to disclose information about how they affect various environmental and social topics rises in significance.

My name is Benedikt, and I am working on the sustainability content in the SAP Profitability and Performance Management Team. In this blog post, I will elaborate on what aspects are to be included in a holistic impact measurement. Moreover, I will give an introduction to Input-Output modeling, a specific tool used for the calculations, and I will present some insights into the implementation of these aforementioned points in the SAP Profitability and Performance Management Value Chain Sustainability Management sample content.

First, let me shortly clarify what exactly is meant by a holistic impact assessment. As said, not only a company’s own business activities must be looked at. Instead, the spotlight should also be drawn to the value chain, consisting of the upstream part, which contains all operations prior to the arriving of purchased goods at the company, and the downstream part, which covers the impacts created by the use of all sold products. As the upstream part is more intuitive, in this blog post we will focus on the impacts on the supplier side.

The impacts can be categorized by two classification systems. For greenhouse gas (GHG) emissions, the GHG protocol defines three scopes: Scope 1 emissions are direct emissions from company-owned and controlled activities and resources; Scope 2 emissions result from the generation of purchased energy, steam, heat and cooling; Scope 3 emissions are indirect emissions that occur in the value chain. In the picture below, you can see a graphic illustration of the different scopes, taken out of the GHG protocol. Whereas the first two scopes are straightforward, the determination of scope 3 emissions requires more complex calculation methods. 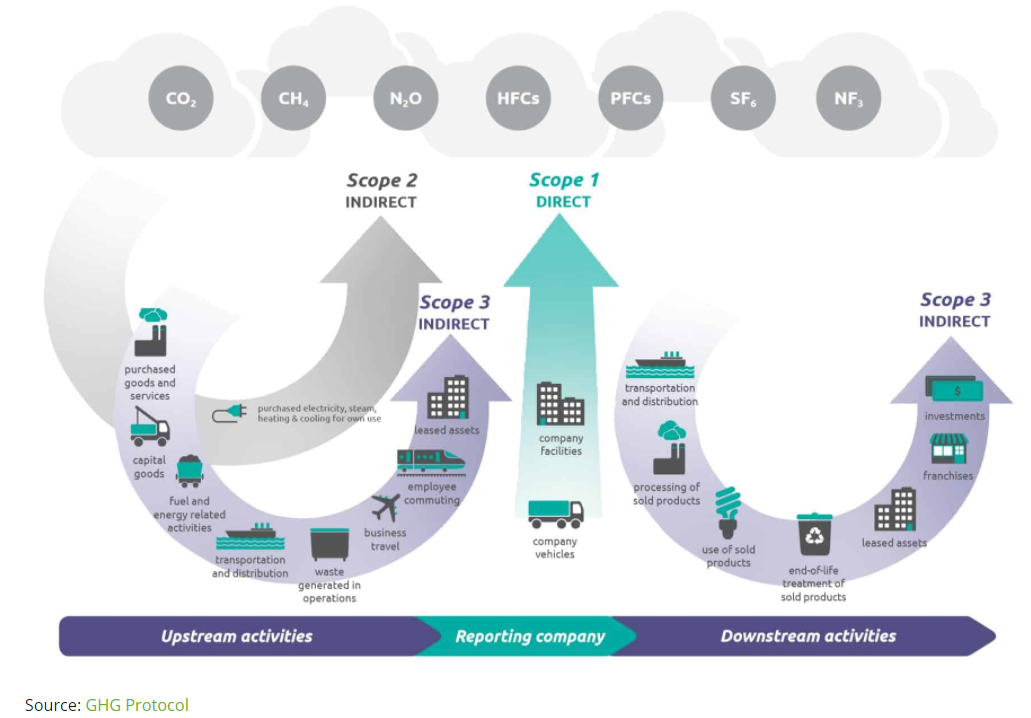 The other classification is partly overlapping the scope definitions but is not constrained to GHG emissions. For capturing a company’s global impact, there are three categories to be considered: the direct impact, which equals the company consumption; the indirect impact, which unfolds in ripple effects throughout the supply chain, meaning that the direct consumption will create further demands and impacts at the sub-supplier level; and the induced impact, which is a consequence of an additional impulse created in the economy through the spending of own employees and of employees of related companies, which manifests itself through higher effective demand increasing the output in the economy, and finally translates into supplementary jobs, value added, income generation, and other impacts. A visualization of the effects can be seen in the following figure. 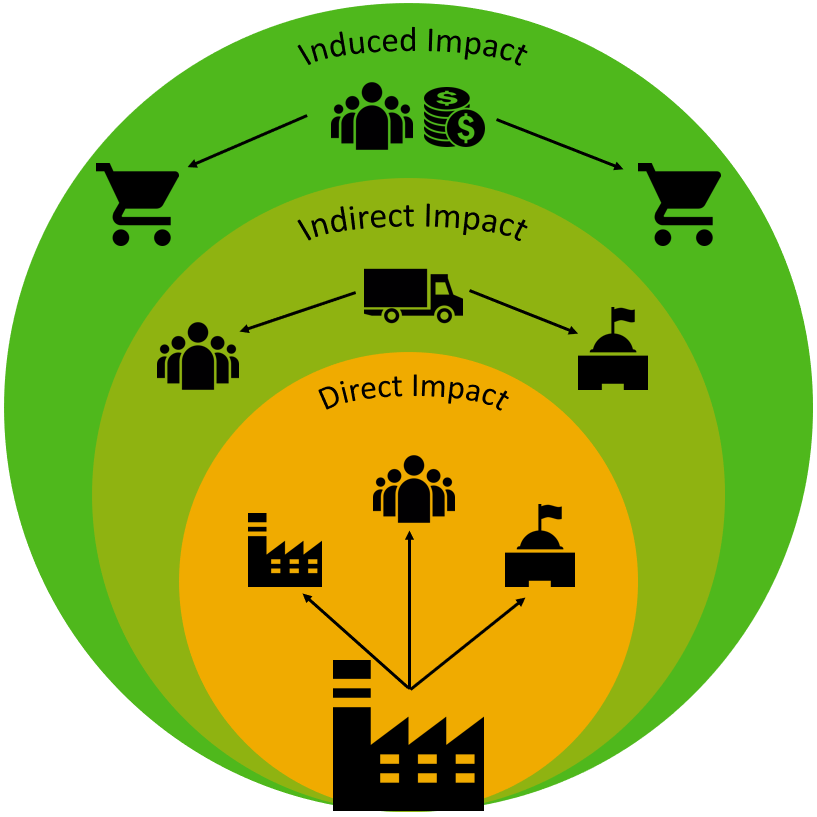 Having set the stage, let me now devote some lines to the so-called input-output modeling, or IO modeling. Devised by the Soviet-American economist Wassily Leontief, who won the Nobel Prize in Economic Science back in 1973 for developing this analysis method, IO models show interlinkages between different industries, which allows for leveraging them for comprehensive impact assessment along the whole value chain.

As stated above, IO models are used to demonstrate interdependencies between industries. This is done by providing a network of exchanges in the production systems of all sectors within one economy. I agree that this sounds complicated. But actually, everything sounds complicated if expressed in technical terms. However, luckily, there is also a way of explaining IO modeling in less intricate words.

After clarifying the row sums, I come to the column sums. For each sector, they represent the amount of products consumed from other sectors in order to realize the production in the given sector. Looking again at Sector 1, you can see that it depends on an input of 20 USD of products from Sector 1 itself, on an input of 10 USD of products from Sector 2 and on an input of 10 USD of products from Sector 3 to be able to cover the desired final demand. Moreover, in addition to the intermediate consumption, you can see the Gross Value Added (GVA) of each sector in a separate row. The GVA is often referred to as the GDP contribution of a company. It can be calculated in two different ways, using the production approach, which starts at the total output and deducts the intermediate consumption, or the income approach, which sums up the taxes less subsidies on production, the compensation of employees, and the operating surplus. Note that the last row of the IO table holds the same values as the last column for each sector. In the tables below, a list of the financial items needed to perform both calculations can be found.

Fortunately for businesses aiming to assess their impacts, they are not required to gather the necessary data to construct such extensive IO tables themselves. The tables are prepared and regularly updated by statistical offices and other public and private institutions inspecting the latest statistical data and market insights.

To conduct the impact analysis for a given entity, the next step consists of converting the total values from the IO table into ratios which show to what extent sectors are dependent on the input from other sectors to create one unit of output. You can maybe already guess that this is done by dividing every single element in the first quadrant of the input-output table, i.e., where the interindustry exchanges are captured, by the corresponding column total. The resulting matrix is called the Technology Matrix and helps to get a better grasp of the magnitude of dependencies between sectors. For our example, the resulting coefficients are shown in the following figure.

Deriving the Technology Matrix from the Input-Output Table

And now comes the magic which will finally facilitate the impact assessment of the complete upstream part of a company’s value chain. First, the Leontief Inverse Matrix, named after its abovementioned inventor, is created. For this, an identity matrix is deployed from which the Technology Matrix coefficients are subtracted, and then the result is inversed. In addition, the company’s final demand needs to be compiled, which in this case will be the purchase data, split across the same sectors as used in the IO Table. Now, a simple matrix multiplication of this Leontief Inverse Matrix and the company’s purchase data will yield the total output, i.e., the holistic impact, as depicted in the following graphics.

Deriving the Leontief Inverse Matrix from the Technology Matrix

Calculating total output by use of the Leontief Inverse Matrix

As the traditional Input-Output models are created on the basis of industry exchanges in monetary units, the impact calculated in our example provides insights into the value of goods and services in USD generated to meet the company’s final demand. However, the IO model can be extended to cover environmental and social effects, such as employment, carbon emissions, or water consumption. To do so, quotas are defined which translate monetary units into impact units, meaning that for an output of 1 USD we assume that e.g., 0.1 kg of CO2 equivalents are emitted. With some in-depth analysis, such quotas can be prepared for a multitude of impacts. In the latest version of the Value Chain Sustainability Management sample content, we calculate more than 20 different impacts in this way. However, each company should assemble individual quota data to get the most realistic assessment of its impacts.

With all that said, we now have all the steps at hand which are needed to do a global impact assessment along the upstream part of an organization’s value chain. To shortly summarize, the three pillars serving for these calculations are the business’s purchase data aggregated by country and sector, the Leontief Inverse Matrix, obtained by public sources, with the same country and sector aggregation, as well as valid quota data to convert total output in monetary terms into other impact categories.

Thank you for reading my blog post. I hope you learned something new and interesting, and I wish you much fun applying the presented calculation methodology for gauging your personal impact or the impact of a company you are interested in. I for myself am going to create some positive effect on our economy now by ordering a 10 € pizza, thus generating a total output of 26.38 € throughout the whole supply chain using the IO model applied in the SAP Profitability and Performance Management Value Chain Sustainability Management sample content. If you have any remarks or questions, please let me know in the comment section below. Have a nice day and see you soon.