At time of writing, SAP Analytics Cloud (Q4, 2021.20) does offer dynamic calendar-based time filtering. This enables users to quickly analyse data for periods such as Current Year, Quarter and Month to Date. The same functionality is also exposed when working with SAP BW Live models containing a 0CALDAY dimension.

The limitation is that for BW Live models, the platform has no awareness of Fiscal / Financial periods. SAC offers no native mechanism to dynamically present common reporting scenarios such as Financial Year to Date, or even just Current Financial Year. All dynamic options Calendar based only.

My organisation needed a solution which allowed Self Service users a way to easily build Stories which rely heavily on Financial Year time periods (July – June FY in Australia). The solution had to be:

Below I describe an architected solution enabling users to create dynamic Restricted Measures or just add dynamic time filtering to Stories in SAC.

To start off, I first needed to address another age-old limitation which is that the delivered BW time characteristics cannot have custom attributes added to their master data. The solution here was simply to create two new standard InfoObjects which would carry the attributes that could not be added natively to 0FISCYEAR and 0FISCPER3.

FISCYEAR is created as NUMC(4), with Master Data and also Texts (optional) selected: 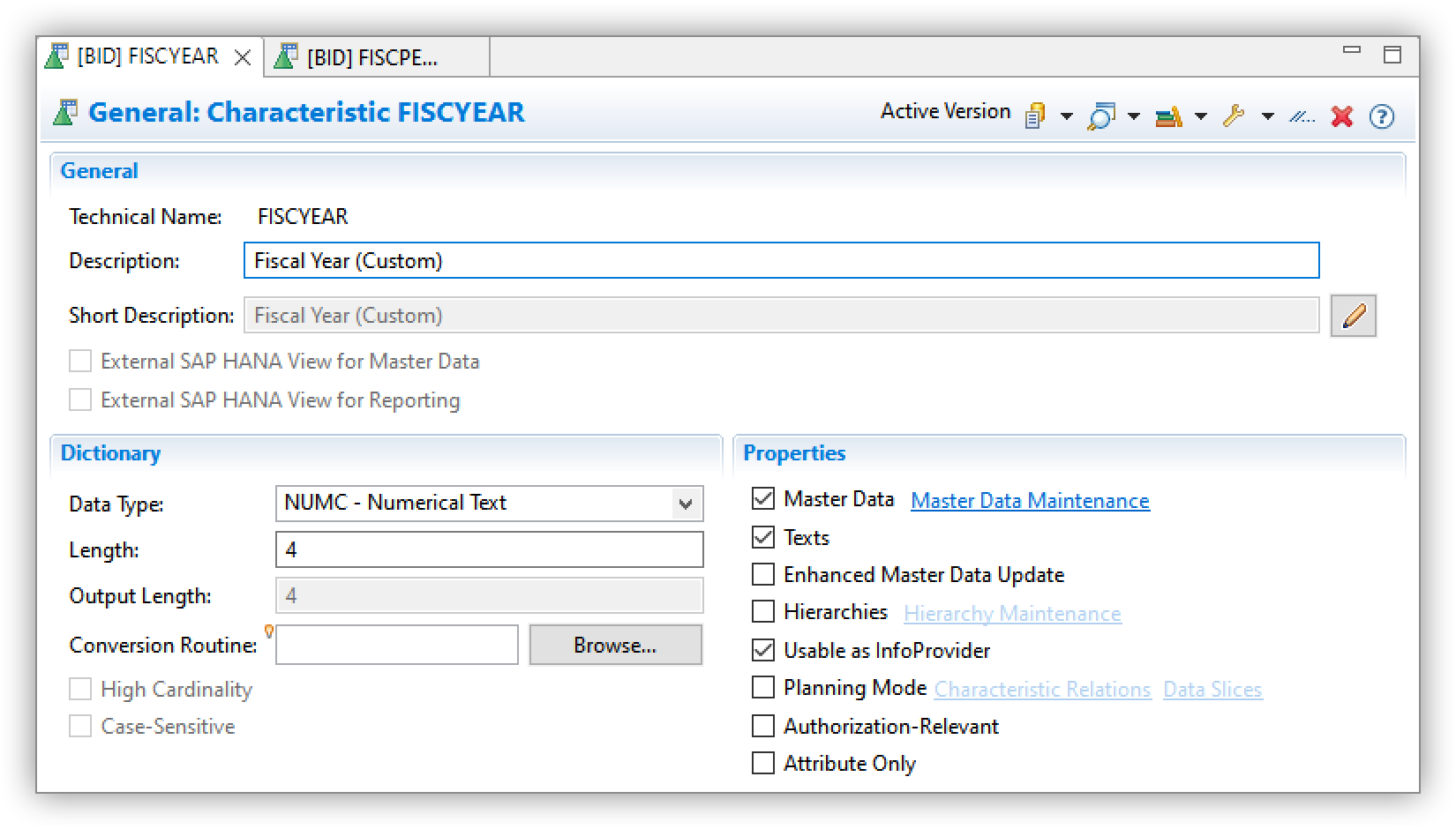 Six attributes are then added. The first four are a simple flag and so are typed as CHAR(1). The last two are CHAR(5) to contain some offset values which will be calculated. All are marked as Navigational.

Not all of these are critical for the solution, in fact only the last two will be exposed to SAC later in the demo. The other flags we have in use for specific unrelated modelling requirements.

FISCPER3 is created as CHAR(3) to mimic 0FISCPER3. It just has Master Data defined.

Four attributes are defined, in this case all are CHAR(1) just containing a flag.

In order to provide dynamic master data to these new objects without requiring any additional data loads or persistence, a choice was made to provide virtualised master data sourced from a HANA View.

We can natively read an SAP HANA Calculation View to provide master data for an InfoObject, but in this situation I wanted to script the logic so began with two Table Functions which were then exposed through Calculation views.

The Table Function for FISCYEAR master data provides a generated list of Financial years, determining all the required attributes in addition to the Display Text used in other reporting:

The above function returns several flags based on the determination of the current Financial Year, derived from the current system date.

It also calculates offset values from the Current Determined Financial Year which are the ones critical to this solution.

You will notice two variations in the flags and offsets determined above. One set will support reporting where the user needs to include derivation from the current open Month, and the second set calculate values based on the last Period.

Within my organisation most financial reporting takes place against completed periods, so the current open period is generally excluded. Some reporting requirements however do need to reference the current month. Providing both sets allows flexibility for end users while building their SAC Stories.

It is worth noting that the above code assumes the Australian Financial Year, beginning in July and ending June the following calendar year. Within my organisation we do not have a requirement to support international reporting for different Financial Year Variants. If there was a requirement to do so, then the likely approach would be to compound FISCYEAR against 0FISCVAR as per standard BW, and enhance the code above to provide determinations for the different Fiscal Year Variants.

Noting also that this function leverages SERIES_GENERATE_INTEGER to provide a generated input list of Years. I chose to provision data for a range of 1970 – 2100. This range could be enlarged or reduced by updating the parameters, or even dynamically determined using the current year to provide a sliding window.

For the ‘Year Offset’ values, I chose to provide unique text values for the Current, Next and Last Financial Years to improve the SAC user experience, but these could be omitted and just left as numerical values depending on preference.

The function outputs a list of values similar to the following:

The Table Function for FISCPER3 master data provides a generated list of Financial Periods from 000 – 012, determining all the required attributes for both contexts of based on current open period, or last completed period.

SERIES_GENERATE_DATE is used to supply a source list of dates which are processed for the attributes. The generation start and end Years are not important as long as the months align with the start and end months for the required Financial Year construct.

Again if you needed to support multiple fiscal year variants then the object could be compounded to 0FISCVAR and the function updated accordingly.

The function outputs a list of values similar to the following: 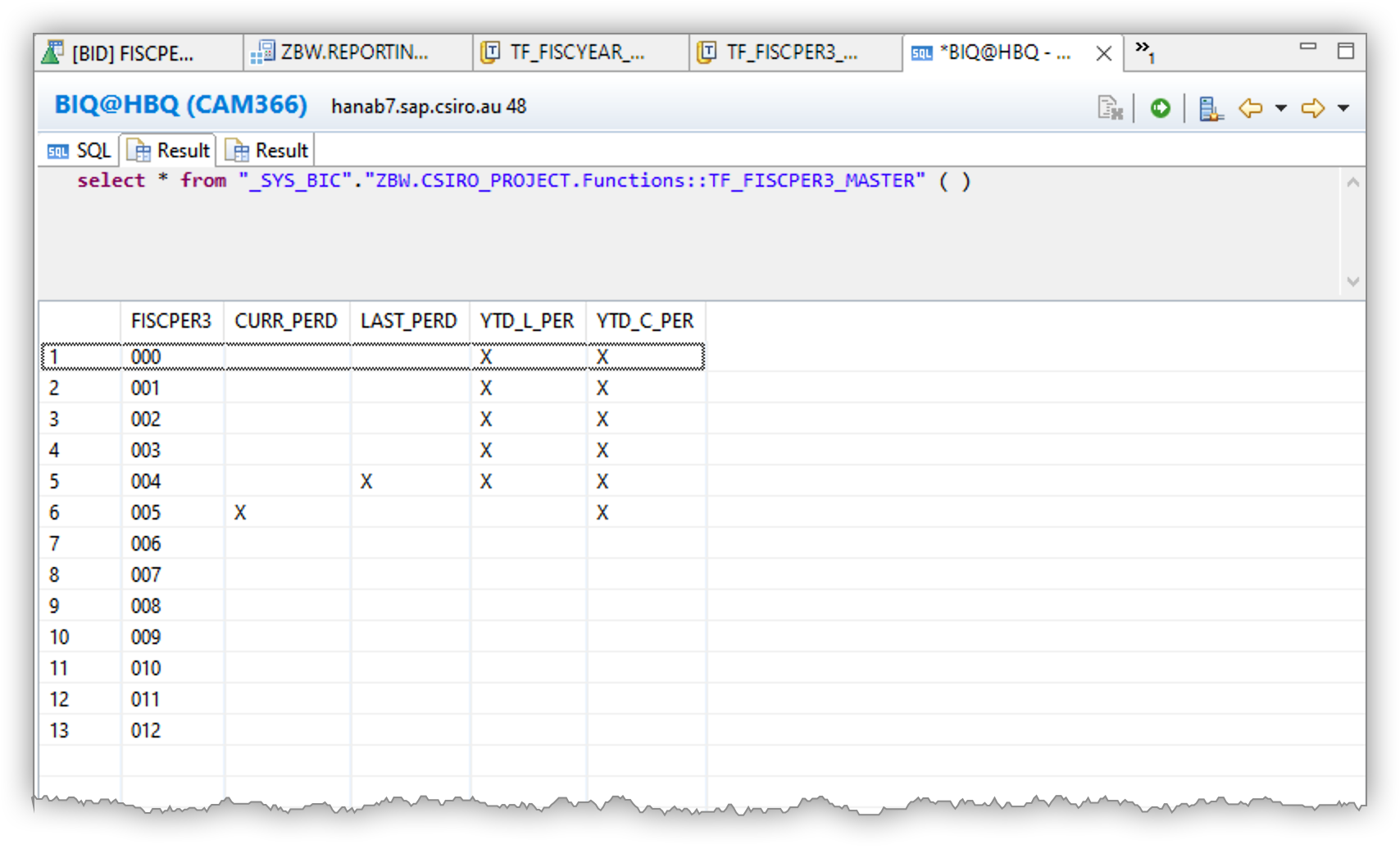 Now that we have the two HANA Table Functions in place, two graphical Calculation Views are created to just present the output directly. Since there is no additional logic contained in the Calculation views, I have not included additional detail for these. They are configured with a Data Category of ‘Dimension, and just use a single Projection node to map all the Table Function fields to the Semantics. 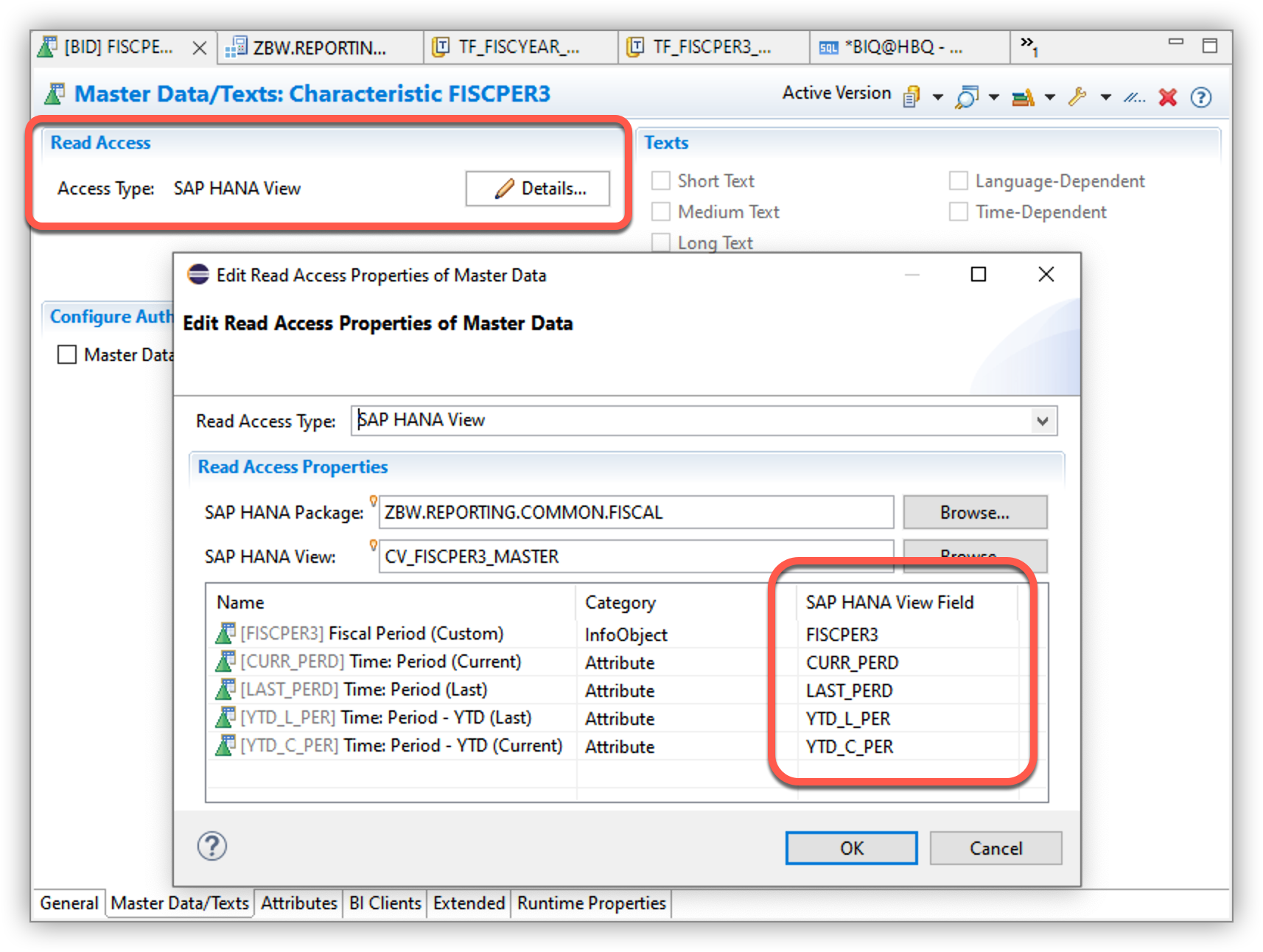 The results are now visible in the Master Data view for the InfoObjects:

With the new InfoObjects now available, they need to be added in to the Composite Providers as required. This can be done just with a field mapping in the Target scenario 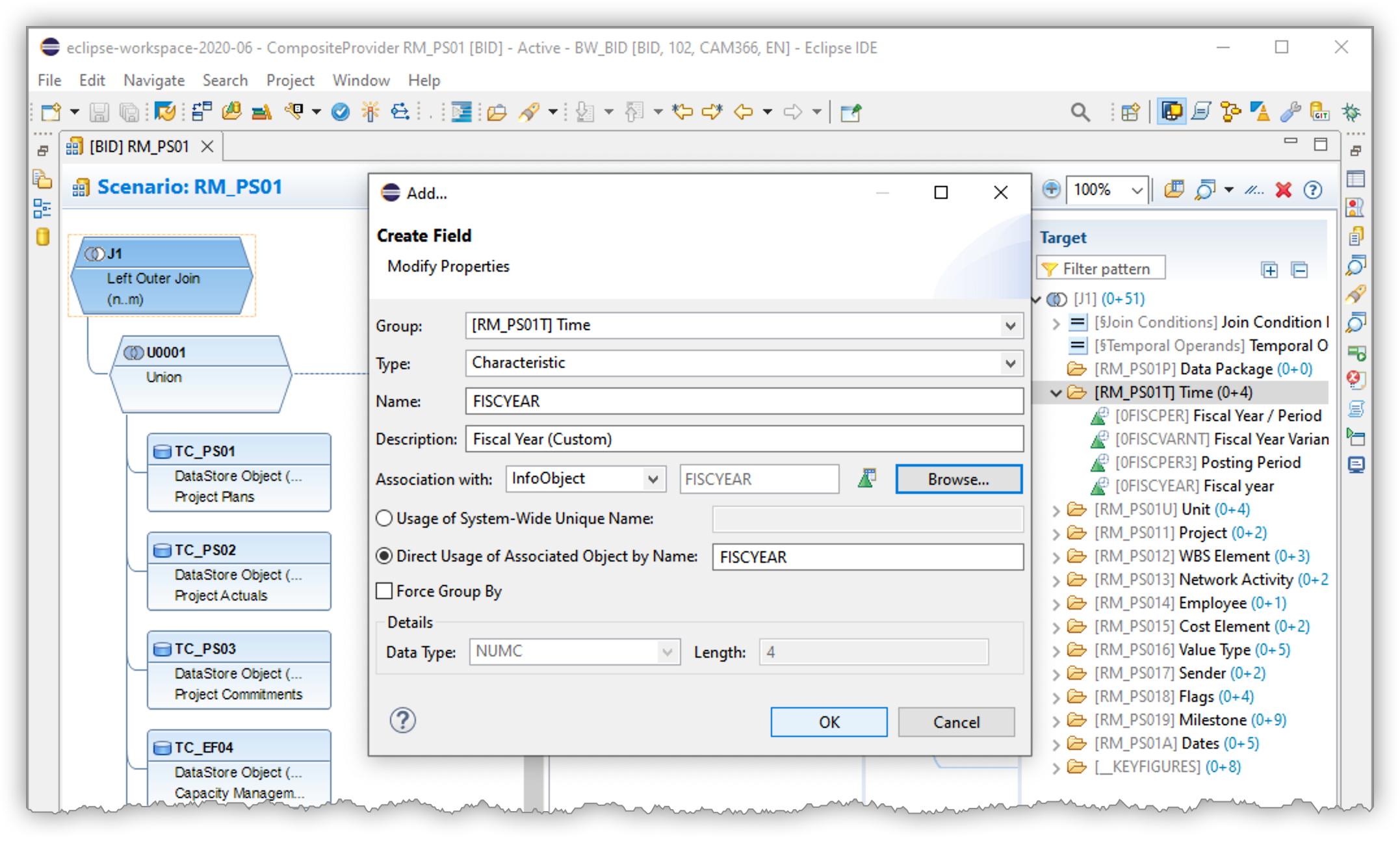 Once the target fields are created and associated with the new InfoObjects, then the existing source fields for 0FISCYEAR and 0FISCPER3 can be directly assigned.

In the Output tab, all Navigation Attributes are then enabled for both FISCYEAR and FISCPER3.

With the Navigational Attributes now available in the Composite Provider, they can be added directly to any Queries used as BW Live data models in SAC. The new Nav Attributes will then become available as dimensions within the Live BW Model. 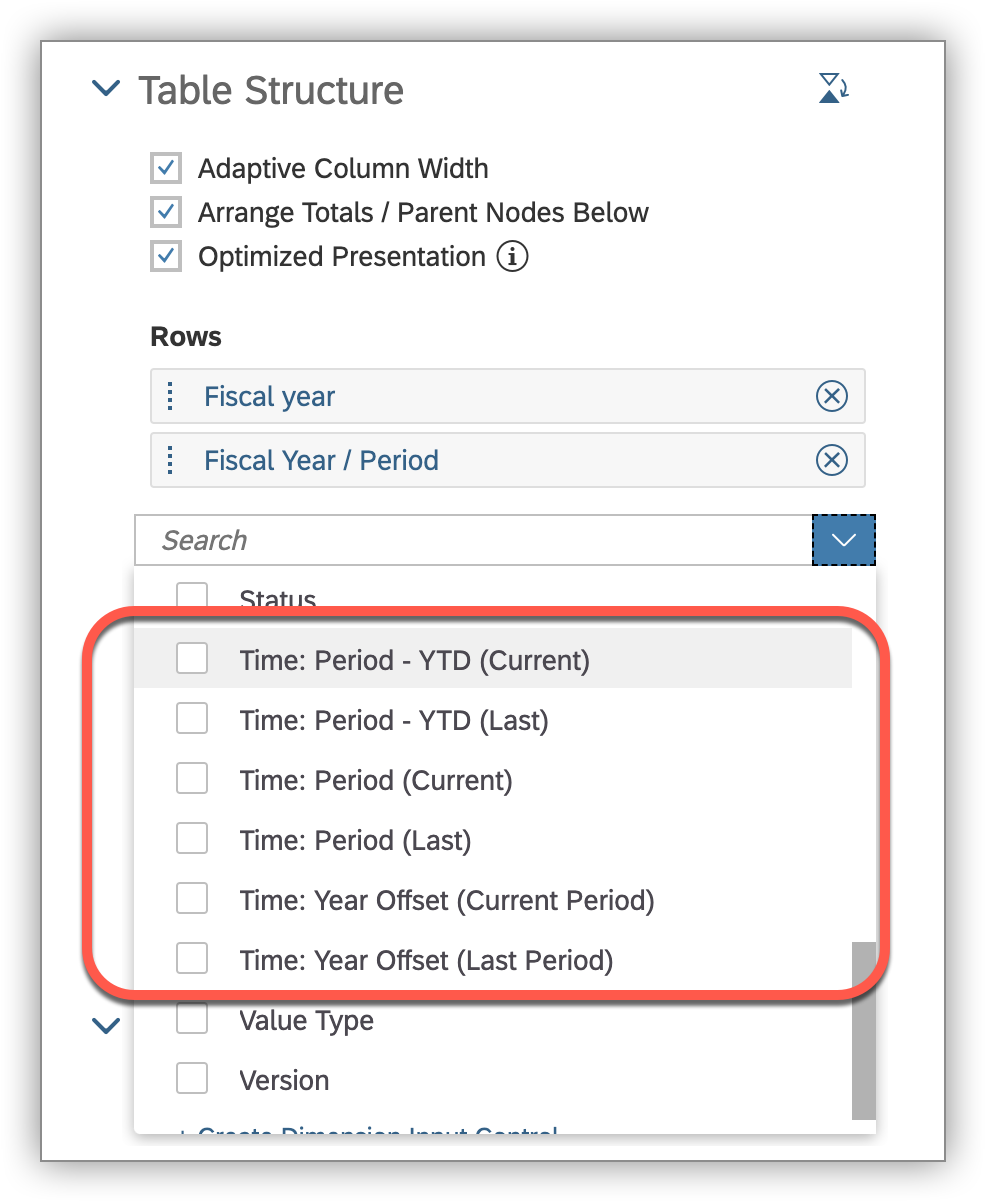 In their simplest form the new dimensions can be directly added to any Story in SAC. The example below is for illustration purposes to see how the dynamic dimensions come through.

Note that for the flag based dimensions, short texts have been maintained in BW just for presentation purposes. 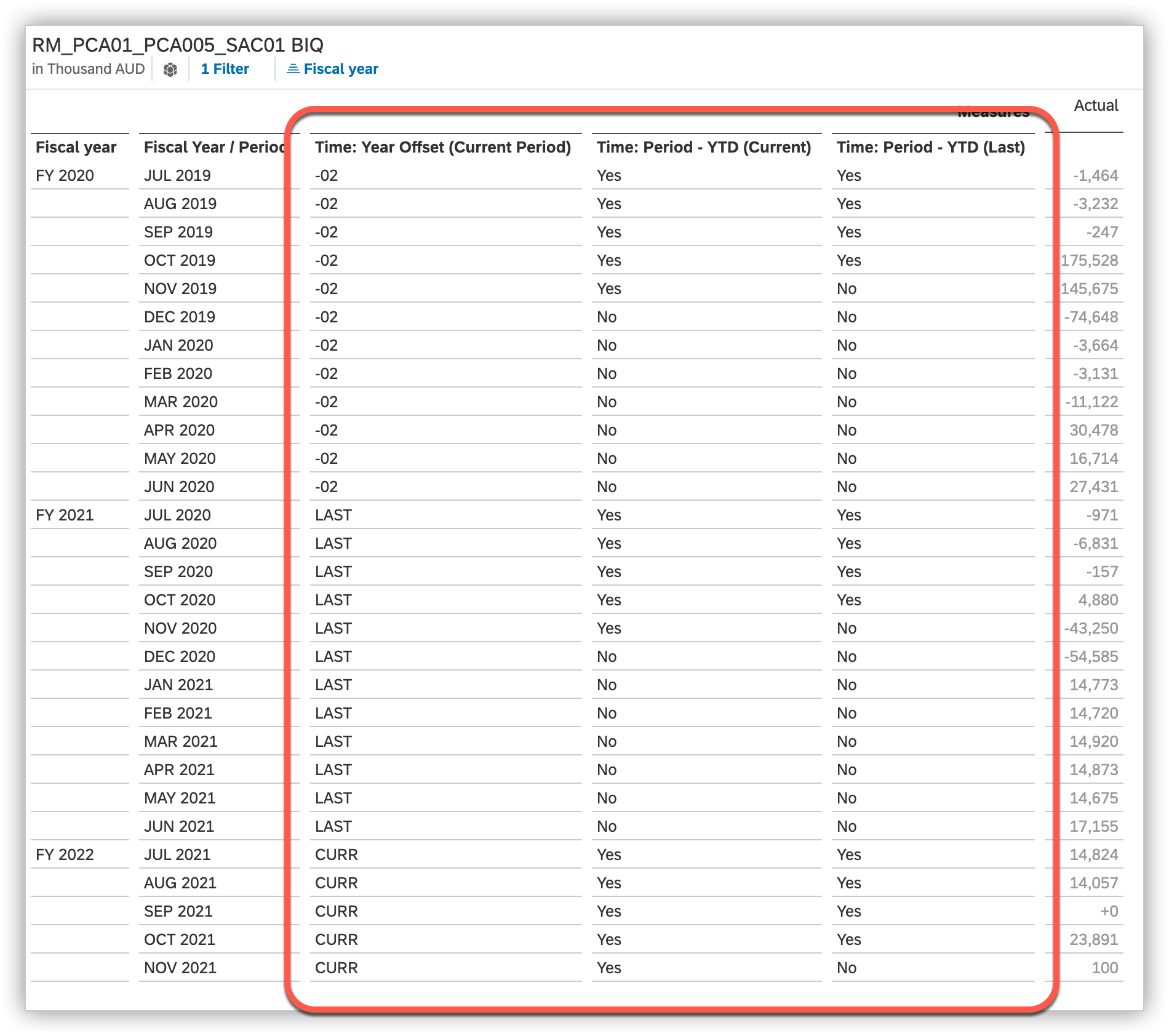 Probably the main purpose for the new Dimensions however would be to create dynamic Restricted Measures for use in charting and reporting. The benefit being that as time moves forward, the parameters for the Restricted Measures do not need to be updated as the values in the Dimensions will change according to the date.

For example, creating a Restricted Measure for YTD Budget values (not including the Current Period):

Because the Period flags have been added to FISCPER3 rather than FISCPER, it is generally necessary to restrict on the Fiscal Year dimension also to avoid a selection spanning multiple years. However in some situations this also may be useful. For example, in the figure below the Financial Year filter has been intentionally omitted from the Restricted Measures. Instead, a breakdown by Year is performed indicating the year on year performance against budget for the same YTD time frame. Here a filter is applied at the Widget level, selecting the LAST, -02, -03, -04, -05, -06 & -07 relative years. This time window would also increment dynamically as the years rolled over.

KPI widgets for showing Current Period values are as simple as filtering the widget for Current Period = YES (or ‘X’) and Year Offset = CURR. Again the selection is dynamic and will roll forward automatically. 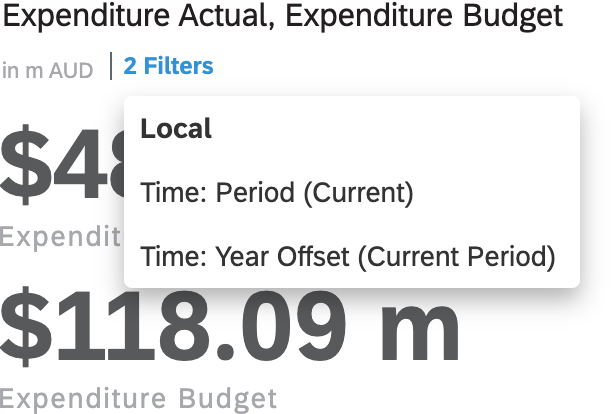 Although still not as elegant as the native dynamic time selection baked into the SAC UI for Calendar based date ranges, the above approach will enable very flexible selection options. End users will be able to self-serve when configuring dynamic Financial based time periods and they will not need to constantly update filters to include the next period or roll the year forward.

The development approach within HANA and BW is minimally disruptive and the solution can be rapidly deployed to any existing standard Composite Provider and Query without revisiting the underlying persisted data model (assuming 0FISCYEAR and 0FISCPER3 already exist in the Composite Provider).

I hope this idea helps anyone else looking for a temporary solution until SAP add native Fiscal support to SAC for BW Live Models.

Thanks Ivan Camac this is very impressive! regards, H

thank you for this great Blog.

we followed all steps but we are getting "user is not authorized" when trying to view the master data in the /BIC/M Table of the infoobject.

did you also encounter this kind of error, i think this is because of missing authorization on HANA DB Side. have you created a role for this or which DB User have you granted which privileges?

Ok we solved the problem, so for others who may struggle with this error, the SAP<SID> User should be granted the analytic privileges which you have to define for the calc views in you package.