An overview of Extensions, Development and ABAP in SAP S/4HANA and SAP Business Technology Platform Extension Suite for Functional Consultants

This blog covers what functional architects and functional consultants need to know about the new technologies used to extend and develop SAP solutions.  This topic can be difficult to understand because there are so many new technologies, terms and choices.  I will focus on SAP S/4HANA and this blog may be useful if you are currently working with ECC systems.  It may help you talk to and understand the technical architects and developers you work with.

I aim to give functional people an overview of what they need to know about “Keep the Core Clean”, “Fiori”, “Business Technology Platform (BTP) Extension Suite” and environments such as “Cloud Foundry” and “Kyma”.  Along the way, I will provide simple explanations of some of the terminology aimed at functional or business people rather than technical people.  I find that most content on these topics is written for a technical audience.

When you move from ECC to S/4HANA there are more choices than before for the development of new features and extensions to the standard solution.  These new approaches allow upgrades to be done faster with less cost meaning that new software versions and innovations can be adopted more easily.

The old approach to ABAP Extensions in ECC

The new approach to Keep the Core Clean

SAP and the SAP ecosystem now advocate an approach called “Keep the Core Clean”.  This means migrating to and adopting new approaches to extend the solution.  Note: some of these approaches started life in the public cloud version of SAP S/4HANA where SAP executes software upgrades multiple times per year.  Many are now also available in S/4HANA on-premise and cloud private edition.

Where possible, extensions in the core S/4HANA system are done using new “in-app extensibility”.  The Custom Fields app and Custom Logic app are used. The ABAP code is “restricted” meaning that it will not impact the upgrade process.

Alternatively, extensions are taken outside the core system and done in the Business Technology Platform Extension Suite (previously called the SAP Cloud Platform).  BTP is a “platform as a service” solution and runs in the cloud. The BTP Extension Suite allows developers to build extensions or applications with different programming languages e.g., ABAP, node.js and Python. BTP connects to the ERP system (ECC, S/4HANA, cloud or on-premise) through standard SAP Application Programming Interfaces (APIs) in the core ERP system.  Using these APIs stops any custom source code impacting upgrades in the core.  This is referred to as “side-by-side extensibility”. 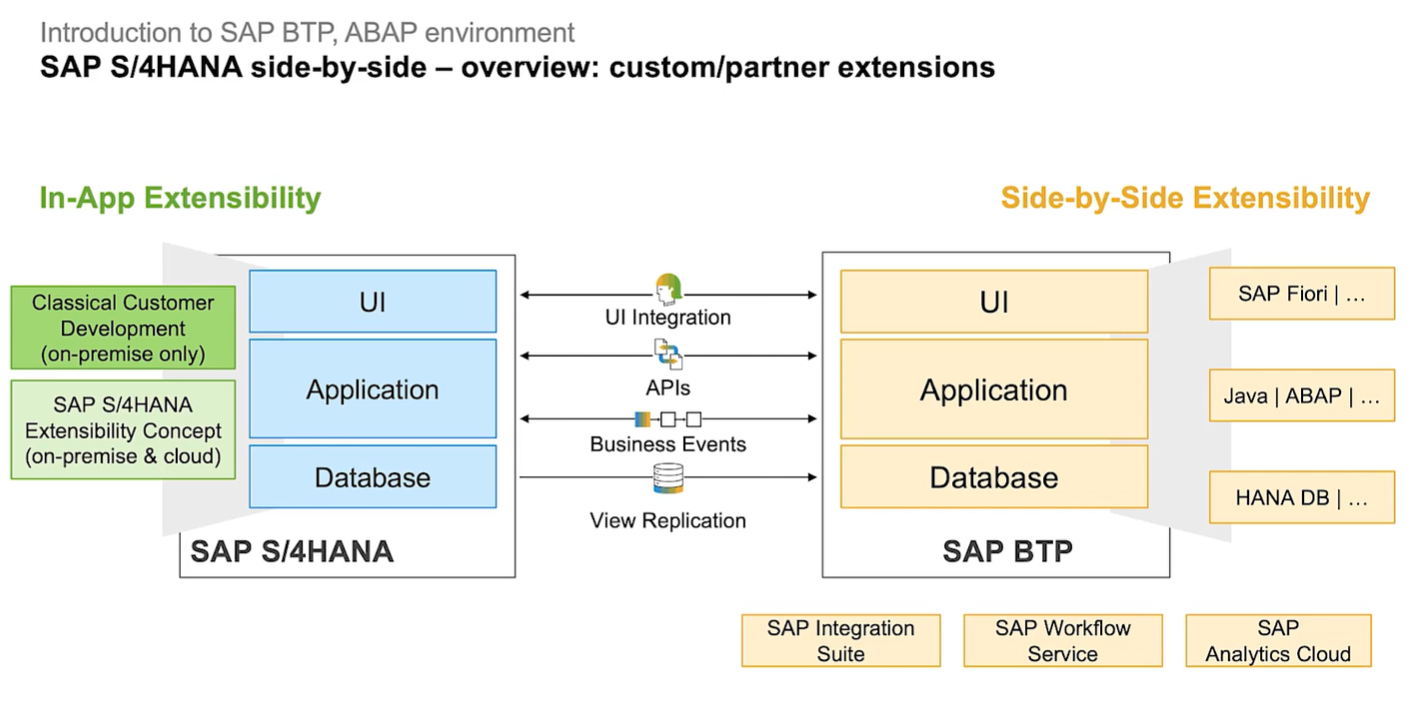 Node.js is based on JavaScript and runs in the central server rather than locally in the browser.  This is different to the Java that ran in the Netweaver Application Server in ECC.  Python is a language often used to for data analysis, machine learning and mobile apps.

Why Business Technology Platform is Important

The BTP solution (previously called SAP Cloud Platform) was launched in 2012. Competing platforms are available from other vendors. Six advantages of SAP BTP Extension Suite are:

BTP allows new applications to be built outside the core ERP system. SAP and SAP partners create and sell solutions that run in BTP and are often integrated into S/4HANA. This is referred to as a “modular” approach. For example, SAP Central Business Configuration product is built in the node.js language and runs in BTP.

SAP’s approach to industry specific solutions has changed.  Less dynamic industry features close to the core ERP processes are still part of the SAP S/4HANA core. More dynamic and innovative features and solutions are now delivered in BTP as the “SAP Industry Cloud”.

Note: the Business Technology Platform is bigger than the Extension Suite but I have not covered the other areas in this blog.  BTP has the Integration Suite which is a cloud alternative to SAP on-premise integration solutions: SAP PI/PO.  BTP also covers analytics, database and data management solutions.  It includes intelligent technologies (e.g., Artificial Intelligence, Machine Learning and Internet of Things) that were previously branded as SAP Leonardo.

ABAP and the move to SAP S/4HANA

Existing ABAP developments in your ECC system are impacted by a move to SAP S/4HANA. A lot of ABAP code will continue to work the same but some may need to be adjusted. SAP provides tools to find code that needs to be changed and assist in the changes.  The changes in the underlying tables are hidden from custom ABAP through CDS Compatibility Views (more on CDSs later). Some ABAP extensions might be moved out of the core to BTP or re-implemented as in-app extensions.  This will probably not be possible for all extensions yet  e.g., if a suitable API does not exist for BTP or a BADI is not available within a published in-app extension.

In the past, the main SAP ECC user interface was SAPGUI.  Year by year, SAP has provided new easier to use role-based Fiori apps as alternatives or replacements of SAPGUI transactions.  Fiori app technology is not ABAP specific and not S/4HANA specific and Fiori apps are also available in other SAP solutions.  As a functional architect or consultant, it is good to understand a little about the technology used by Fiori transactional apps in S/4HANA.  Here are some key aspects.

With SAP’s HANA database technology, came Core Data Services (CDSs).  These are data models that allow data to be read and updated without needing to know about the underlying database objects and tables.  CDSs are available for nearly all business objects in SAP S/4HANA.  These CDSs can be used via published “services”.  A commonly used open protocol for services is “OData”.  The published service provides an internet URL (web address) that can be used by a web browser app to execute operations.  Common operations are to Create, Retrieve, Update and Delete (CRUD) records.

Fiori apps work on the “model view controller” concept. The ABAP programming model for Fiori is used in SAP S/4HANA applications. It uses OData services fed by Core Data Services (CDS).  The User Interface can run on any device (e.g., laptop or phone) and is built using SAPUI5 which is a development kit for HTML5 (open code that drives web pages).  “Fiori elements” are used that provide common features in the app such as floorplans, icons, messages and paging through lists.

Development in the BTP Extension Suite

SAP BTP is a multiexperience development platform (MXDP). Gartner classifies SAP BTP as a leader in their MDXP quadrant. What is MXDP and why is it valuable?

As with other technologies, innovation in software development is accelerating and new improved approaches often leapfrog established approaches. The new approaches cannot be ignored because of the competitive edge they provide e.g., lower running costs and higher performance.

An environment provides everything required to build, manage, run and update a cloud application.  There are 3 main environments in BTP:

SAP provide a “Cloud Application Programming Model” (CAP) that is relevant for the Cloud Foundry and Kyma environment. This provides a recommended approach for defining data models, defining services, adding logic and building Fiori apps. As a framework, it provides out-of-the-box solutions for common requirements such as authentication, authorization and country localization. Following the recommendations will avoid lock-in to specific third-party software and make switching to new emerging technologies easier in the future.

“Open source” tools and resources are used by developers in BTP. For example, in the ABAP environment, developers may use the Eclipse Integrated Development Environment (IDE) software on their desktop with an ABAP Development Tools (ADT) plugin.  This is the BTP equivalent of the traditional SE80 transaction.  Developers connect these tools to BTP using the browser based “BTP Cockpit” through a “space” in a “sub account”.

The ABAP RESTful Programming Model (RAP) allows database tables, CDSs and services to defined and built from code in flat text files.  “Annotations” in “CDS Projected Data Model” are used to define user interface parameters like column positions and search parameters. Developers may use GitHub which is a web-based repository to share, version control and collaborate on open source code.

In the future, SAP plan to make the ABAP environment in BTP (aka Steampunk) available “embedded” in the S/4HANA instance. This will help with extensions that would create heavy data traffic between S/4HANA and BTP. 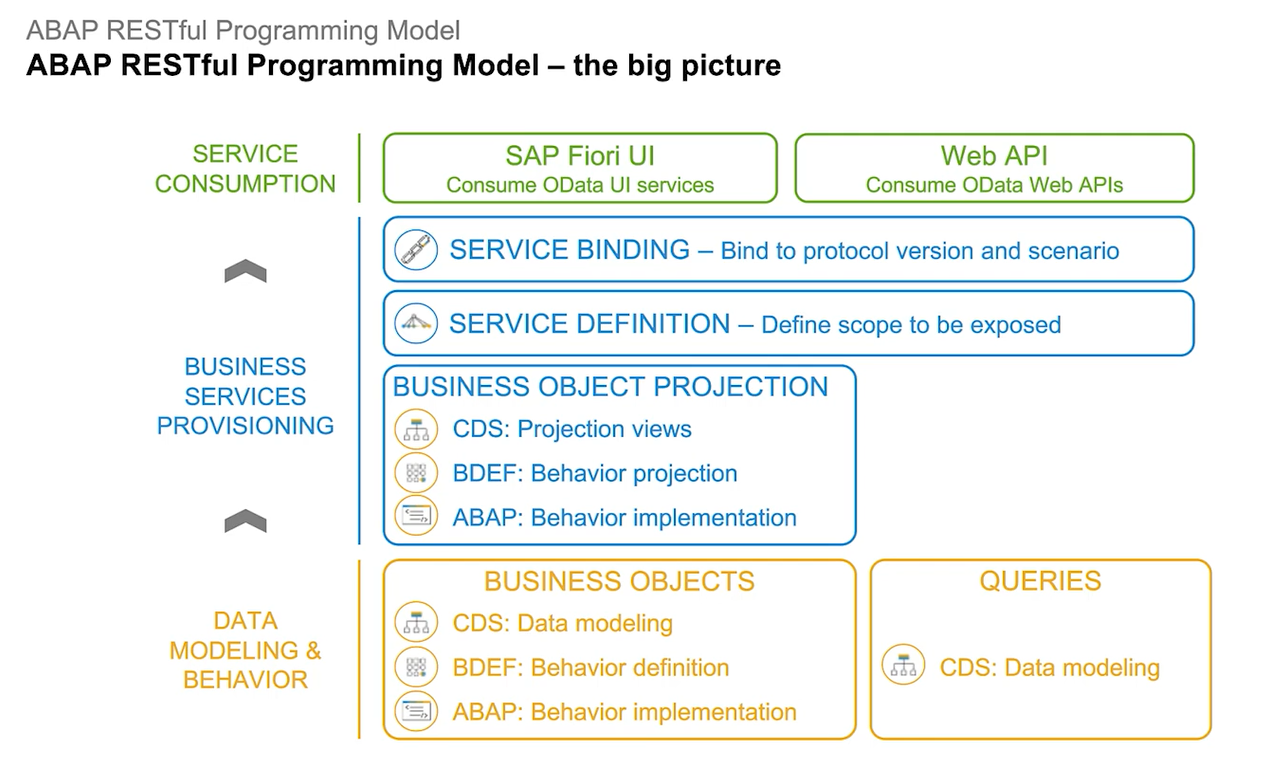 The SAP Business Application Studio IDE is used to build out the front-end Fiori app.  Alternatively, a no-code / low-code approach may be preferred using the SAP AppGyver Consumer Pro for web and mobile apps.  SAP AppGyver was purchased by SAP in February 2021.

Complete apps are often made available to end-users through the SAP Launchpad Service that runs on SAP BTP.  This provides a Fiori launchpad that enables access to apps running on different instances e.g., BTP, S/4HANA and SuccessFactors.

I hope you found this blog informative.

Thanks for sharing this, good summary!