My SAP Analytics Cloud User and Team Provisioning SCIM API Sample Scripts recently received an update to version 0.6. This blog post is for those that already use the samples and would like to understand what’s new and a few tips on how to update to this version from 0.5.

If you’re new to the samples, then there’s no need to read this as the main introductory blog post and the user guide have already been updated. The ‘Sample Scripts Presentation’ will soon be updated. It means everything is in one place for you, rather than having to read lots of different blog posts. Nevertheless you might find it interesting.

Here’s a little more details on each of the above (except the Transferring a Hidden team, as that’s detailed in the blog post mentioned above):

Before this update you had to edit the scripts to ensure the ‘userName’ property had the correct value. You don’t need to do this anymore. All you need to do is define a Postman environment called ‘SAMLSSO’ and set its value to:

It’s as simple as that!

And it even works for the 9xx transport samples, only the variable is called ‘Source-SAMLSSO‘ and ‘Target-SAMLSSO‘.

To ‘update’ your existing environments, all you need to do is run the updated samples 001 (and 011 if applicable) and the new environment variable will be added for you, setting its value to ‘default’ (by default! ). You can then change it if you need to and you don’t need to worry about making any code changes any more just because your using SAML SSO.

You no longer need to use the 1xx, or 2xx samples to update the role a user has directly assigned to them. You can now use a single sample script to update just that aspect.

They both have the usual ‘add’, ‘remove’ and ‘replace’ actions. As like the other sample actions, a ‘replace‘ action with an empty array [] will remove all roles from the user, even when you don’t know what roles they currently have. (i.e. works in the same way that 403 will remove all teams from a user, when you don’t necessarily know which teams the user is a member of)

If you are using your own custom Identity Provider and configured SAML SSO, then these samples are handy to update the user property, called userName, that is the thing you’re mapping the user on. Both samples, 409 and 429, will update both the email or the ‘custom’ (external id) for the user, whichever you’re using. (remember the samples are now SAML SSO aware, so they will make sure the update is right for which ever SAML SSO mapping you’re using)

Sample 409 is when you want to identify and update the user by the ‘SAC userid’. An example data file when using ‘custom’:

and you can update the email, still identifying the user by the ‘SAC userid’:

Sample 429 is when you identify and update the user by their ’email’ and so the sample data files now have email as the ‘id’ allowing you to update the ‘custom’:

and updating the email (identified by the old email!):

The sample script creates teams and adds users into the team that meet a certain criteria. It scans all the users that are defined in SAP Analytics Cloud enabling each user to be checked against the criteria.

For those users that match the criteria, the user is added or removed. It means you can easily identify certain users, by adding them to a team, to then update or process them by another sample script!

In turn, it should help resolve issues with your users’ configuration and I suspect it will become a script of choice for many administrators.

There are some 18 different types of ‘tests’ and include things like:

The script enables both ‘and’ and ‘or’ operators between the different tests allowing for complex logic, such as ‘users not in a team AND created in the last week’.

And because the target is a team, we have the usual ‘actions’, like with the other ‘team-on-team’ samples. But because we’re scanning all the users registered we have a few more!: 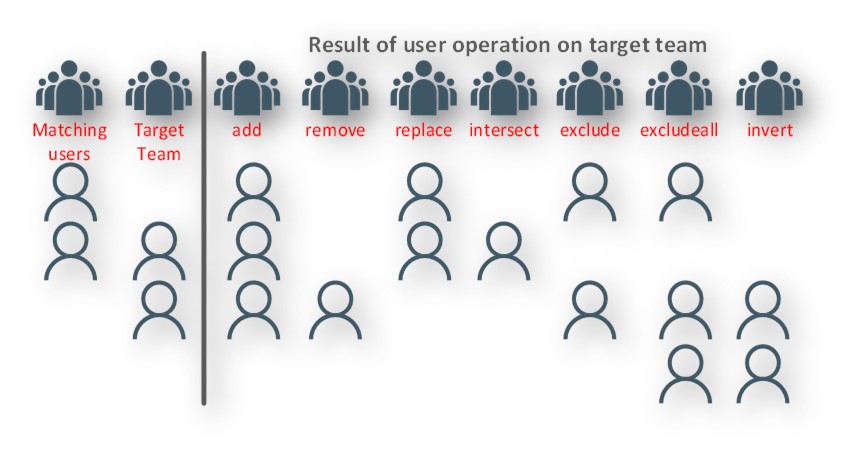 Additional actions when scanning all users

Actions include ‘replace’, which removes all users not fulfilling the defined test (just like the other samples), and ‘invert’ that is simply the opposite of the matching users. This ‘invert’ is only possible because we’re scanning all the registered users.

You really need to see the details of what all the ‘tests’ are but to cut to the chase, these are the types of teams that can be created (the sample data files provided creates these and a few more):

It might be this script fulfils your need entirely, like ‘Users without a team’ or ‘Users without a role’. But the power of this AdminToolKit is further demonstrated by ‘Scenarios’ which is explained below.

I hopefully thought of everything and tried my best to keep the script as versatile as possible. It includes a few extra’s bits to polish things off:

To get going, just use the sample data files provided, and search and replace the following in all the data files:

The AdminToolKit enables a great deal of additional use-cases because it creates teams of users that help other sample scripts process users. To save you the time and effort, I’ve preconfigured a bunch of sample data files so you can start to understand the power of the ‘Admin Tool Kit’.

All you need to do is tweak the data files for your own needs, such as the team names, roles names, manager ids. You’ll find these data files in a new folder called ‘Example data files\Scenarios‘.

Each scenario just consists of sample data files, that if ran in the given order, will fulfil the task at-hand. They are documented in the User Guide with suggestions to further tailor them to suit your needs.

I can imagine other scenarios will be added over time and please do make suggestions here.

How to update to version 0.6

You should have changed the code on the scripts that create users (1xx and 2xx), to only define the correct date/time/number formations and language. You’ll still need to re-apply these changes to the latest version. So consider creating a new Postman workspace and importing the new samples into the new workspace allowing you to then copy the lines of code you made from your old workspace. The changes you made, should be very simple and easy to copy/paste!

If you made code changes because you have SAML SSO enabled, then you can ignore any changes you made, you’ll not need to make them again. The scripts are now SAML SSO aware.

Once you imported all the new sample scripts into your new Postman workspace:

Don’t forget to download a fresh copy of all the sample data files. Many more have been added.

A few extra bits and bobs: