It is quite often the case to select the value from one specific source item out of two or more different source items depending on a boolean expression so that this value can be individually processed and accordingly written into mapped target node. For example, the source MIG has an “Amount” node which allows values based on different currencies and this amount must be converted to one target currency. Another example is a “Date Time Stamp” source node which follows different time zones, and this date time stamp must be converted into the only target time zone. In both examples are the code values (currency and time zone) responsible for the further processing into the appropriate target result. Especially this can be expressed by a conditional expression in form of an if-then-else statement. Another example is to write a temperature into the target node, if this is within a specific range of temperatures. This blog explains how you can use define a conditional expression using XSLT V2.0 xsl:choose, XPath X2.0 functions if ( … ) then … else … function or by the Integration Advisor specific qualifier approach which indirectly enable a conditional expression.

You are at Mapping Guidelines (MAG)

A conditional expression has one or more conditions with comparison or test expressions that return a boolean value true or false. Each expression compares one argument ($arg1) with another argument ($arg2) by using a comparison operator such as is equals to, it is less or greater than, etc. Each comparing argument can be a single value, a constant, a set of values, or a XPath functions which returns a single value or a set of value. Depending on the kind of arguments, you must use in XPath different representations of comparison operators. If you want to compare exactly one value with exactly one another value you can use the operators: eq, ne, lt, gt, le or ge. If you want to compare a single value with a sets of value, you should use the operators for general comparison: =, !=, < (alternatively: &lt;), > (alternatively: &gt;), >= (alternatively: &lt;=), or > (alternatively: &gt;=).

The following table lists you the different comparison operators and their behavior:

If you want to create in Integration Advisor mapping functions with a general comparison it is recommended to just use the alternative operators: &lt, &gt;,&lt;= and &gt;, because all the mapping functions are expressed within XSLT elements.

It is not necessary to just use the in the test expressions comparison operations. You can also use all other XPath functions, which returns a boolean value, such as

Furthermore, you can write further complex functions as arguments that calculate boolean values.

In Integration Advisor, it is possible to do a conditional expression by the following optionss:

How to create these conditional expressions and their different behaviors can best be explained by an example use case. The requirement is to calculate the target amount in its target currency ‘EUR’ (Euro) from the source amount (Source node: $nodes_in/D_6345) by using the corresponding exchange rate of the specific source currency (Source node: $nodes_in/D_5004s). The supported currencies are CNY (Yuan Renminbi), GBP (Pound Sterling), INR (Indian Rupee) or USD (US Dollar).

The xsl:choose has a per different condition a xsl:when element. The attribute @test of the xsl:when element provides the comparison expression. The xsl:choose may have a xsl:otherwise element, which indicates the else state to be taken if none of the other xsl:when choices matches. xsl:choice, is useful, if you want to involve creating complex and deep XML structures in the processing. But this is quite seldom the case, because the mapping elements in MAGs are just focusing on value of leaf-nodes.

In the following Integration Advisor mapping function example each xsl:when tests, if the node $nodes_in/D_6345 has a specific currency code. For better readability this currency code is set into a variable $vCry and the amount is set into the variable $vAmt.

If a currency code in $vCry matches to a specific xsl:when statement, the corresponding function in xsl:value-of will be taken for calculating the output amount by multiplying the input value from variable $vAmt with the specific currency ratio. The function format-number converts the output into a numeric format with two digits. All non-listed currency codes will be covered by the element xsl:otherwise, which generates an error.

If you like, you can use xsl:sequence or xsl:copy-of instead of xsl:value-of. The different behaviour is described in blog Integration Advisor – Mapping element functions, the use of xsl:copy, xsl:copy-of, xsl:sequence, or xsl:value-of

The XSLT function xsl:if represents a conditional test against the input content. It is in other words a if-then-else statement without the else. Similar like xsl:choice, xsl:if is useful, if you want to involve creating complex and deep XML structures in the processing. But as I said this is quite seldom the case in context of the mapping elements in MAGs.

xsl:choose and xsl:if are not a very elegant way to express a conditional expression. Since XPath 2.0 it is also possible to do the logic of conditional expression in a XPath expression itself by using if ( … ) then … else …. . It is useful in context the MAG related mapping elements, because the processing does not quite often involve creating complex and deep XML structures. The focus is almost on source and target values from leaf nodes.

The if( … ) then … else … can be expressed within a xsl:sequence or xsl:value-of

As you can see in the following Integration Advisor mapping function example the different conditions of currency codes can be expressed by a nesting of the if( … ) then … else … expression.

The Integration Advisor provides a further elegant way for conditional expression, especially if one of the comparing arguments is a constant which can be expressed as a qualifier value. For this case it is useful to set for each condition a qualified node because all created qualified node based on same node will be considered as choices and will implicitly work similar like a comparison expression. This approach further reduces the amount of coding and increases the readability for business users. It requires a definition of qualified nodes per condition in the source MIG, the duplicates of nodes in a target MIG and the mapping elements between the corresponding nodes in the MAG.

The following figure shows how the different conditions for each currency can be expressed by qualified peer nodes in the source MIG. The blog Integration Advisor – The precision of semantics – Use of qualifiers | SAP Blogs describes how you can set these qualified nodes. 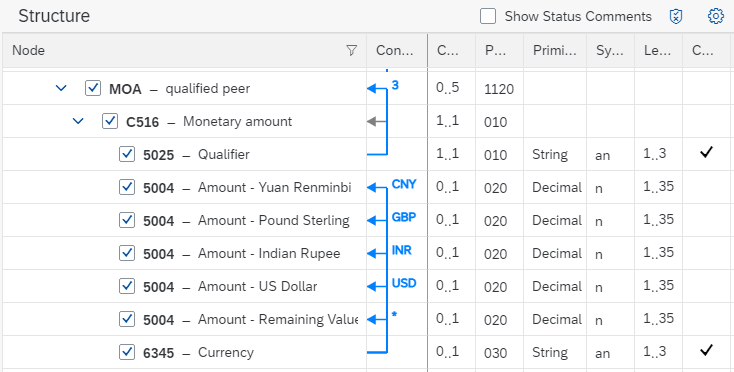 This approach requires duplicates of the same number of qualified nodes in the target MIG. However, since the Integration Advisor does not provide the duplicate node feature a workaround must be used for the creation of these duplicates. You’ll find this workaround in the blog ###BLOG###. The target MIG should look like the following figure.

Based on this source and target MIG it is now very easy to create the mapping elements between these prepared source and target nodes. Like in the following figure shown, each currency specific condition has a 1:1 mapping.

Figure 6: Use of qualified nodes as conditional expressions

The complexity of the function is significantely reduced and just cover the rule for conversion and the transformation into the target decimal format:

The else condition in where the remaining code values should throw an error can be defined as following:

The only reason, why the source node D_6345 is also mapped is that the currency code will be shown in the thrown error text, if this condition will take place in runtime.

Now you learned three different options for defining conditional expressions in a mapping guideline. How have now the choice. I personally prefer the use of the XPath if( … ) then … else …, if I have to create complex conditional expression in where especially the comparison expression needs more complex calculations and not just the comparison of constants. In case of comparing constants, I’m using the qualified references, if it is possible. Because this reduces the complexity of mapping functions, increases the human readability, and especially increases the efficiency. How? For example, in the case if you have a source MIG which might have many different conditions with different values which will be differentiated by constant values and this source MIG must be mapped to many target MIGs. It is than easier to explicitly express each condition by qualified nodes and focus on the just the necessary conversion rule between the mapped peer instead writing very complex and nested functions per MAG. It also reduces the maintenance efforts, if you must regularly update the source MIG with new constant values and further data dependent on these constants.

Read the following blog posts for more information related to the MAG editor and the functions:

Thank you for sharing Gunther! It is detailed and useful as always.

Note to the future readers including myself, "Conditional Mapping" is a different feature in Integration Advisor that is documented here:

Thank you for the insightful comment. Since the new feature didn't have any posts yet, the search engine always showed this article as the first result.

I wanted to contribute a blog post explaining the "Conditional Mapping" feature, I hope it is up to your standards!

you're correct, the issue was the mssing article. Many thanks that you contributed a blog. It looks great to my and I'm more than happy you also written a blog which helps us to share and enable the power of Integration Advisor. If you have any further blogs regarding Integration Advisor in your mind, please go ahead and share it with the community in blogs.sap.com.