In this blog post, our aim to explain about the error “Synchronous Timeout Exceeded” in SAP Process Integration/SAP Process Orchestration and provide some troubleshooting tips which will help better understand where exactly is the problem and how to avoid/prevent it in the future.

To better understand this blog post, it is expected that you have some kind of knowledge on how the Messaging System works. It is advised to read the blog post Tuning the PI/PO Messaging System Queues, which provides a good overview of it.

Every synchronous message which is processed by a SAP Process Integration/SAP Process Orchestration system has an internal timeout. This is to ensure that it follows the synchronous pattern and that it must be processed within this time. So once a message is created, it has this exact time to complete its processing, no matter at what exactly it is doing. If it doesn’t complete its processing and return a response to the sender system, then the system will raise the error “Synchronous Timeout Exceeded”.

This usually comes along with the MessageExpiredException error as well.

How the message timeout is defined? 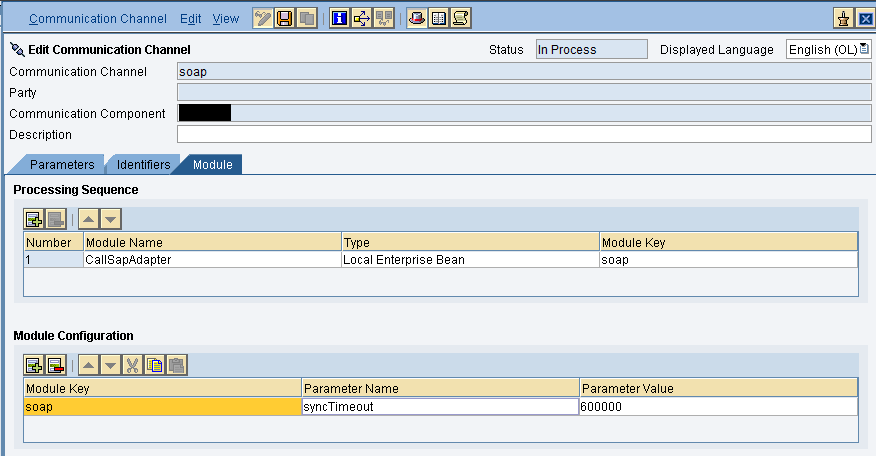 If no specific parameter is defined at the Communication Channel, then the default message timeout from the system will be used. It is defined by the parameter “xiadapter.inbound.timeout.default” within the Service “XPI Adapter: XI”. 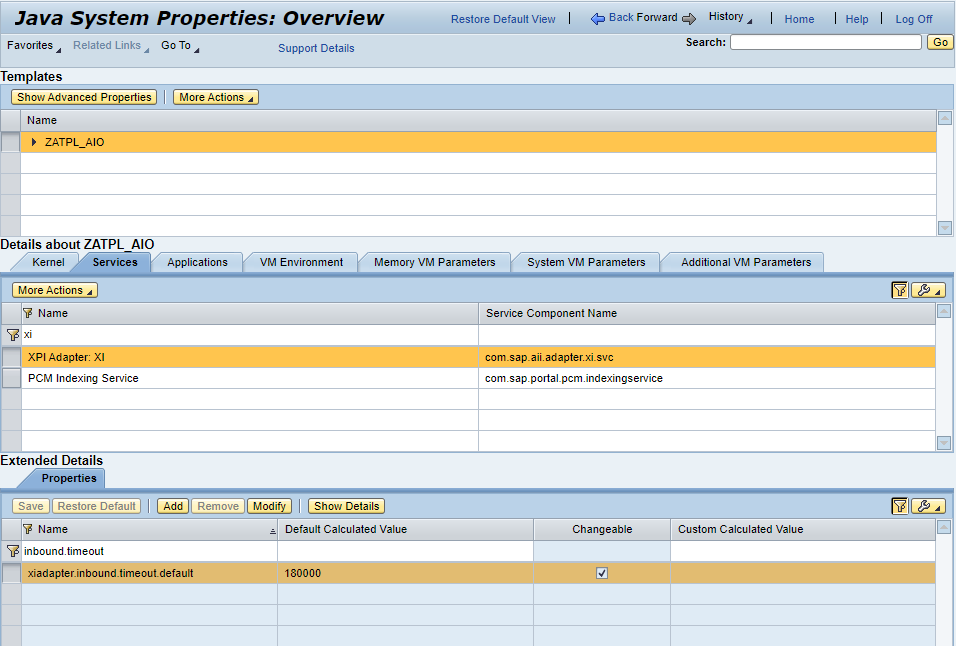 Why would a message timeout?

If you see the error “Synchronous timeout exceeded” in your system, then this means that message wasn’t able to complete its processing within the defined timeout. This usually occurs due to the following reasons:

In order to show you some troubleshooting tips, I have created an integration scenario in my SAP Process Integration system where I can reproduce the “Synchronous timeout exceeded” error.

Using this double scenario setup, I can put a thread.sleep in the Java Mapping of the second scenario, which will simulate a delay in the response from the receiver system.

The message timeout is set to 5 minutes. So once 5 minutes goes, the error will be raised in the message processed in the first scenario.

The message audit logs can tells us a little bit about the situation, however in order to get more details about the current situation of the system and better understand the problem we will need some traces. For that, we will use the XPI Inspector tool, which is available in SAP Note 1514898 – XPI Inspector for troubleshooting SAP Process Orchestration / Integration.

For an overview of the tool, feel free to check SAP Wiki Tracing PI issues with XPI Inspector tool

Once you deployed the XPI Inspector tool in your system, open it and capture a trace with the following settings: 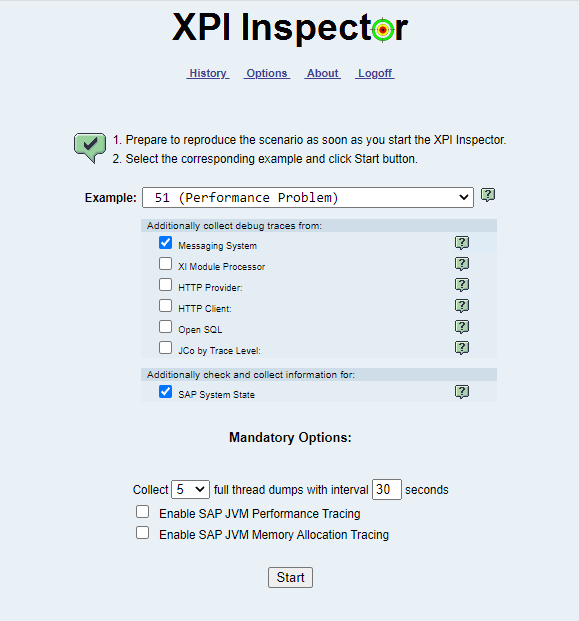 This trace needs to captured while the issue is happening, as they will capture relevant information about the system threads, adapter threads and the messaging system of the PI/PO system.

If the trace is not captured while the problem is happening, it will not assist in any way in identifying the problem.

Alternatively, if the system is too slow to run the XPI Inspector traces, you can also try to get thread dumps in a different way. More in SAP Note 1095473 – How to get a full thread dump in AS Java

It all comes to identify at which step of the message processing the “Synchronous timeout expired” error was thrown:

Also it is important to iterate that in some some situations, there can a mix of the 3 situations above. So it is always important to check the whole message audit logs and pay attention mostly to the timestamp in each step.

For example, in case there is a performance issue in the receiver system and a lot of new messages are arriving, it could be that one message times out and another message which was waiting in the queue for a long time receive a resource to process it. So once it receives the resource it makes the call and right after it the “Synchronous timeout exceeded” is raised. But when checking the message audit logs, you will see that it took for example 4 minutes in the queue and just 1 minute after the call to the receiver system.

So again, the timestamps play a huge role here to better understand it.

Within the XPI Inspector trace, there are 2 important things to check. The Messaging System Overview and the Thread Dumps itself.

Once you open the Result page in the XPI Inspector trace, you can open the Messaging System Health Check page:

Once the page is open, you can scroll down until you reach the MS Queues table. This table will show all the information about the current adapter thread usage within each adapter queue for all server nodes running in the system.

When the issue is happening, you will see the Call threads (responsible for synchronous message processing) for your sender adapter with all (or with some*) entries in use: In this case, as my scenario is SOAP -> REST, we can see that the SOAP Call threads are all in use ( 5 out of a maximum 5). This means that whenever a new request reaches the system it will have to wait in the DispatchDisp queue (or in the Adapter call waiting queue*). So when I triggered 4 more request to this scenario, they were allocated into the DispatchDisp queue and will be waiting for a SOAP Call thread to be released so it can continue its processing.

* This depends on your message parallelism configuration

The next step is to check the thread dumps captured in the XPI, as they will provide information about what exactly the thread in the sender adapter Call is doing that it is taking too long to be released.

This will open the Thread Dump Overview, which will have some general information about thread usage within the system. For us, the most important are the ones which are under the Application Threads section, which are the ones related to the adapter threads. If there are entries in the DispatchDisp, you can see some entries in the Application Managed Threads section. 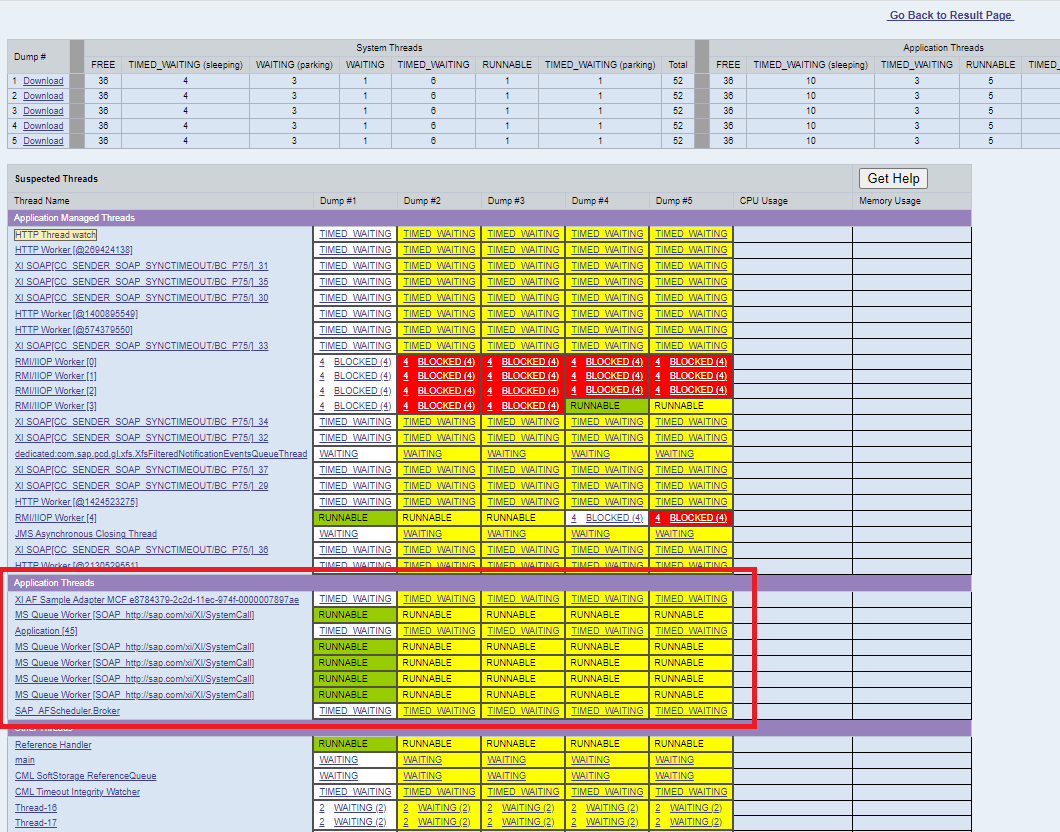 Just by a simple look at it, we can already see 5 threads from the SOAP Adapter Call which are currently being executed by the Messaging System. In every thread dump taken, they were at a runnable status, which is an indication that they are running and probably waiting for something.

There are two ways to check it further:

So from the thread above, we can see that the REST Adapter (the adapter from the receiver communication channel) is executing a call to the configured target server, and is waiting for a response from. Whenever you see “java.net.SocketInputStream.read”, “java.net.SocketInputStream.socketRead0”, this means that the system is waiting a response from the server it has connected to.

If you read this whole blog, you should be able to have a better understanding of this error and possibly will be able to troubleshoot it on your own it if it happens in your SAP Process Integration/SAP Process Orchestration system.

Given the above, there are a few things that can be done in the SAP Process Integration/SAP Process Orchestration which can help minimize the impact of such kind of issues (as the main problem usually resides in the receiver system as discussed above).

For info on the above configurations, please check:

Another related SAP Documentation which might be informative about this topic:

Great Blog with detailed Information. Thank you! for sharing