For all the Mobile Development Kit (MDK) Mac users out there, you have probably heard that Mac OS Monterey has been released.  What you may not know is that Monterey officially only supports running XCode 13.  You can read Apple’s official announcement about it here.

Trying to run older versions of XCode will give this message. 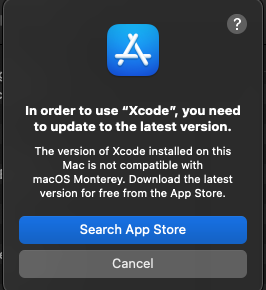 This means that you will need to update to XCode 13 and also update to a version of MDK that is compatible with it as well.  However, that presents an issue since the currently available MDK versions are not compatible with XCode 13. We are testing a patch now that will be released in the next week or two that will introduce support for XCode 13.

I am writing this post in an effort to spread the word about the fact that Monterey only officially supports XCode 13 in the hopes that if you have not already upgraded, and are an MDK user, that you can consider delaying your upgrade until MDK has XCode 13 support.

If you have upgraded to Monterey and need to try and run an older XCode version, I have seen this YouTube video post that appears to support launching XCode 12.5.1 from the terminal.

I will post an update to this blog post when MDK 6.0.5 with XCode 13 support has been released.  Until then, keep on building MDK apps!