As an integration consultant at BTM Consulting AG in Switzerland I recently got the requirement to connect an SAP system using SAP Process Orchestration (PI/PO) to a Google API (“Google BigQuery” in this case). I realized that the task is less simple as it sounds…

I ended up loading third-party libraries into PI/PO and playing with private keys in different formats. Eventually I replicated the scenario on Cloud Integration (ex. CPI) just to see if it would work there in the same way.

But let me first explain the challenge:

When I looked at the API documentation I understood that Google requests API calls to be authenticated by Oauth 2.0, which is not surprising and state of the art. OAuth in a nutshell: This protocol enables an application to authorize at another application using a so called token. That token gets issued beforehand by an authorization server (of the API provider) based on authorization grants provided by the user during the user authentication. The OAuth 2.0 standard includes several mechanisms to transfer these so called assertions (see RFC 7521 [1]), depending on whether a user (which enters his credentials) is involved in the flow or not, or depending on security requirements.

For API calls issued by a server (server-to-server communication without involving user interaction) the token request to the authorization server does often contain a client id and secret, which are two strings (credentials) that were generated by the API provider. Many of us are used to this and this is called the Client Credentials Flow. My further researche however showed that, for enhanced security, Google requires for their API an OAuth assertion in the form of a signed JWT token instead of the Client Credentials. This is called the OAuth JWT Bearer Flow (see RFC 7523 [2]) (which is similar to the SAML Assertion flow).

CPI supports “Client Credentials”, “Authorization Code” and “SAML Bearer Assertion” flows. Neither CPI nor PI/PO support the JWT Bearer flow out-of-the-box at the time being. UPDATE: Actually there is support on PI/PO since v7.50 SP18 (patch 2892050) for the JWT Grant Type, but this does not yet include the usage of the JWT for client authentication (signed token). It is on the roadmap however for Q1/2022.

The trust between JWT issuer and API provider is established by the use of a PKI. The client uses a private key to sign the assertion (JWT token). The signed JWT token is presented to the Google API (or others which implement the same grant type) in the http request parameter ”assertion”. The OAuth server validates the token/signature and on success returns a base64 encoded string in exchange. This will serve as Bearer token in the subsequent requests to the actual API endpoint (as long as the bearer token is valid). The private key can be created and downloaded in the Google Cloud Console while linking it to a Service Account.

The authorization and grant flow in the end looks as follows: 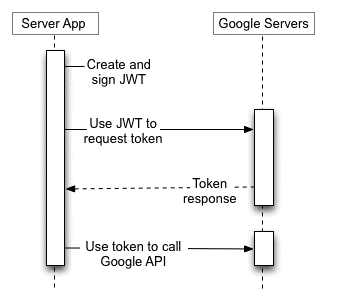 In this post I will show you how to develop this scenario with help of an open source Java library. Like this, we can easily implement a JWT token flow without being restricted by the integration platform’s capabilities. The approach therefore is very similar on PI/PO as well as on CPI. I have built the solution on both platforms but mainly show here how to do it on CPI. You should be able to easily adapt it and use it in a UDF on PI/PO if necessary. I will give some hints regarding modifications for the two target systems.

I assume that you’re an experienced SAP integration developer and therefore will not go into every detail of the development process. There is an excellent blog by Santhosh Kumar Vellingiri which explains every implementation detail of a very similar requirement for a Salesforce API, mostly using CPI’s built-in functionality [3]). I decided to go another way since I implemented this first on PI/PO an since I wanted to make use of libraries to create the JWT.

My description here is tailored to the Google Cloud API, but generally the Oauth Bearer Flow standard is used by other API providers and the approach is therefore very similar with slight adaptations related to the target application.

I basically implemented what Google describes on their corresponding help page under “Preparing to make an authorized API call” [4]. To achieve this in practice, we’re going to use the jjwt Java library [6] to create an JWT assertion token.

Google suggests to use their own client library instead to avoid mistakes. I have in fact successfully used this library on PI/PO in a User Defined Function (UDF), however on CPI it seems not allowed (or is at least not best practice) to issue http calls directly out of a Groovy script – and that’s what the Google library tries to do. (Update: The best practice part was an assumption. In the meantime, I have seen Groovy scripts written by SAP which issue HTTP calls, so it IS possible, you can give it a try if the Google libs dont’ work for you). So I’ve implemented the JWT creation with help of the generic jjwt [6] library which I believe is as safe as using the Google libs. Especially so when we use the Cloud Integration’s key store to store the private key.

The process in short:

Let’s begin with creating the private key in the Google Cloud console:

In case you use the approach of step 3b above (you use the PEM string (e.g. on PI/PO) in a parameter instead of a key in a key store), you have to replace the code in the try block by the code below:

Update: Correction to above code as per Sunil’s comment:

A simple Iflow on Cloud Integration could look like this (this is just for demonstration purposes – in practice you would better create these steps as local integration process and call it from the main process when you need a Bearer token):

In PI/PO you would have to write some additional code in the UDF to fetch the Bearer token providing the JWT Assertion token (which is what we above performed with a Request/Reply step on Cloud Integration). Then you would extract the token from the response and save it for example into an ASMA (Dynamic Configuration for setting it as HTTP Header in the REST Receiver Adapter).

To keep this blog concise, I don’t go into detail how to do an HTTP lookup or how to set the ASMA within a UDF. There are many other blogs which explain this, please refer to them.

Actually, if you’re dealing with a Google API on PI/PO, I suggest you use the Google library in a UDF and feed it with the content of the Json key file [5]. You just have to make sure to upload all dependencies as jars as Imported Archives. Find sample code to fetch the Bearer token using Google’s lib below.

Import the jar of com.google.auth.oauth2.GoogleCredentials and all its dependencies into Imported Archives and reference them in the Message Mapping UDF section. 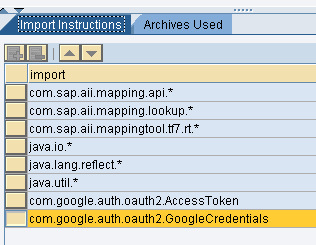 Of course you can be more creative with storing the token and reusing it. Some ideas: store it in a (global) variable, use it from the same or other Iflows the next time, and fetch it only once it is expired (by time, or when the API returns a 401 Unauthorized – then only fetch the a new token, e.g. in an exception sub process).

Please let me know if you found this helpful or insightful, or if you have any inputs or need more information. I am sure there are other ways to achieve this (maybe by avoiding this OAuth grant flow completely in some way) or in the future perhaps SAP is going to release a feature to do the same out-of-the-box, who knows. 😊

UPDATE: Actually there is support on PI/PO since v7.50 SP18 (patch in support note 2892050) for the JWT Grant Type, but this does not yet include the usage of the JWT for client authentication (signed token). It is on the roadmap however for Q1/2023. 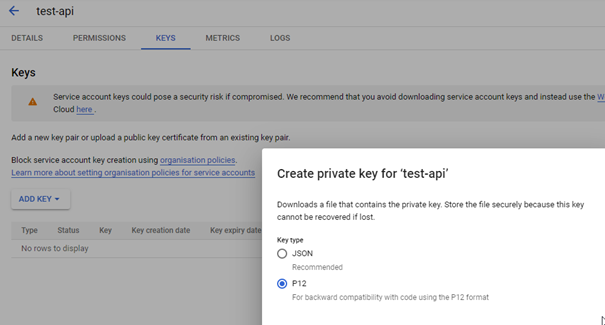 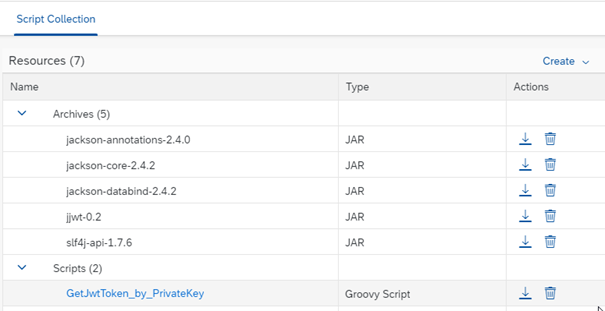 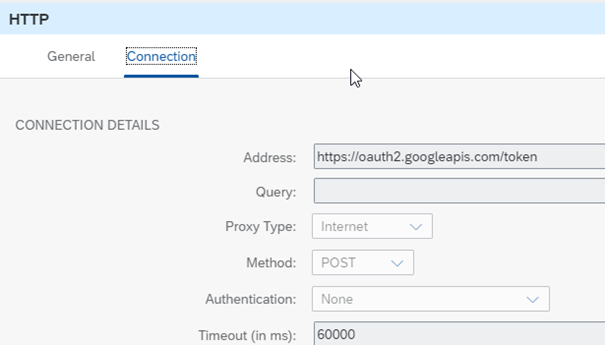 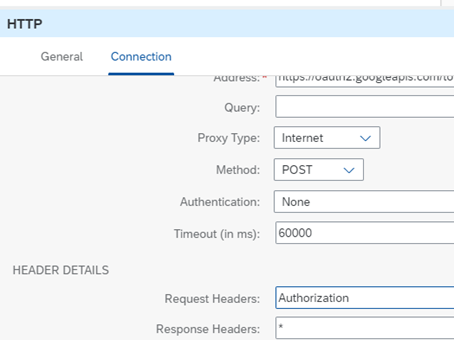 Unfortunaly when I use this grant_type = urn:ietf:params:oauth:grant-type:jwt-bearer I get error

Can you explain your scenario and what exactly you have done a bit more? Which API are you trying to connect to (in case it's a public one)? I assume it's not a Google API. Are you on Cloud Integration or PO?

Hm, the error message is strange, it mentions the string "jwt_token", but that is not the grant_type  value that you passed, right? That parameter should look something like this (it has to be URL encoded, and there is no space before and after the equal sign):

I applied the instructions and worked beautifully.  Only minor cosmetic changes are related to our Google account.   One was the scope, in my case the scope was: https://www.googleapis.com/auth/devstorage.read_write

I was using the Google Upload API using https://storage.googleapis.com/bucket/ContanetName

I attached a screen print that is specific to utilizing GCS. 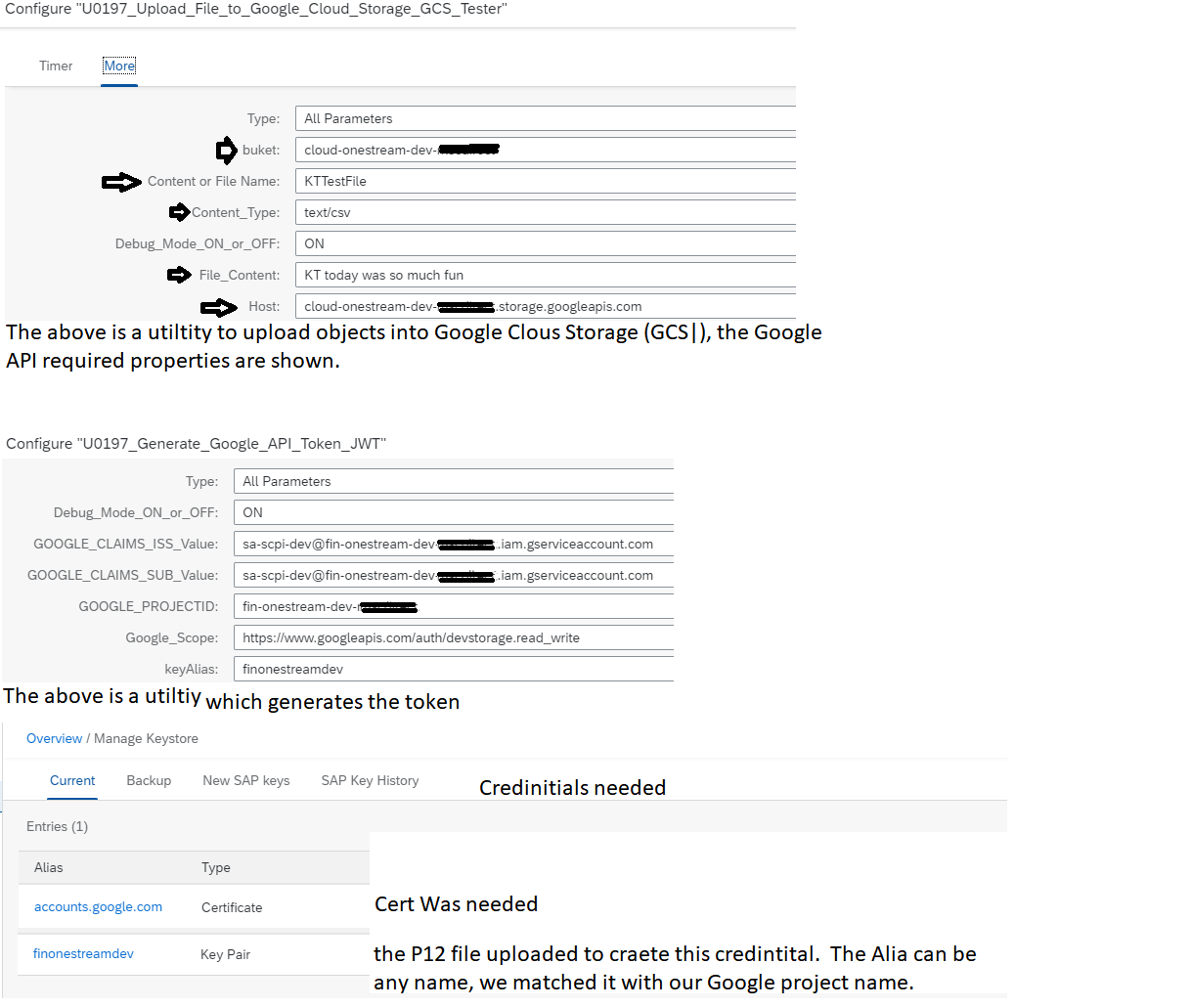 The above were the 2 credentials we created.

Happy to hear that it worked and thanks for sharing your solution!

I have adapted it to be used for JWT authentication for DocuSign.

As background DocuSign supports both OAuth Authorization code grant as well as JWT. Since in CPI you can create OAuth Code grant credentials that was my first choice.
But to my surprise I couldn't use these credentials in the http adapter. Apparently if I want to authenticate that way CPI needs the OpenConnectors license which has a DocuSign connection.

So onwards to JWT.
I could not get the Docusign RSA keys to work. I did not succeed in creating a .pfx from the public & private key, so I used another keypair and uploaded the public key to DocuSign.

The implementation only differs slightly from the google API. The header required two parameters, both algorithm & type. The payload contained a few more parameters, most notably epoch timestamps for current time and expiration time. I've used 10 position timestamps for this as that was in the DocuSign specs.

So all in all pretty happy with this!

Thank for sharing your adapted solution Tom! Good to know that the approach works flexibly.

I made it work in CPI with just RSA Private Key!

With this adjustmen and the RSA Private Key (without line-breaks and annotations) it successfully generates access-tokens.

I also switche assertion with grant_type in the request body. I dont know if that makes any differences.

DocuSign provides a huge package of postman sample requests and there they also put assertion first.

The code provided for 3b variant did not work.

I would like to add the code which worked.

In case you use the approach of step 3b above (you use the PEM string (e.g. on PI/PO) in a parameter instead of a key in a key store).

Thanks Sunil for letting me know and adding a working code snippet for that case!