With the growing popularity of SAP deployment in the public cloud, SUSE engineering further modernized and simplified SAP HANA and SAP NetWeaver deployments using Salt. Salt is a configuration management system that is also supported by SUSE Manager and SUSE Linux Enterprise Server for any sort of automation. The Salt automation is included in newer versions of SLES for SAP and fully supported by SUSE. There was one drawback, the installation and some configuration of SLES for SAP was still a manual process which had to be done before the Salt automation could be started. Combining Terraform with the Salt automation, SUSE engineering continued to modernize and simplify SAP HANA and SAP NetWeaver deployments by automating the creation of the infrastructure. The combined automation was started with and is available for several of the Public Cloud providers – AWS, Azure and Google Cloud Platform. In addition to the public cloud providers mentioned above, the open source automation works with OpenStack and libvirt.

I am proud to announce that the automation is also now available on IBM Power Virtual Servers running in IBM Cloud.

A 10 minute youtube video has been posted which demonstrates setting up terraform and salt along with showing the deployment of a highly available SAP HANA System Replication on Power Virtual Servers in IBM Cloud, all following SUSE’s best practices. Below is the diagram of what is deployed in the video along with a high-level explanation of the steps to prepare and run the Terraform and Salt automation which the video explains in detail: 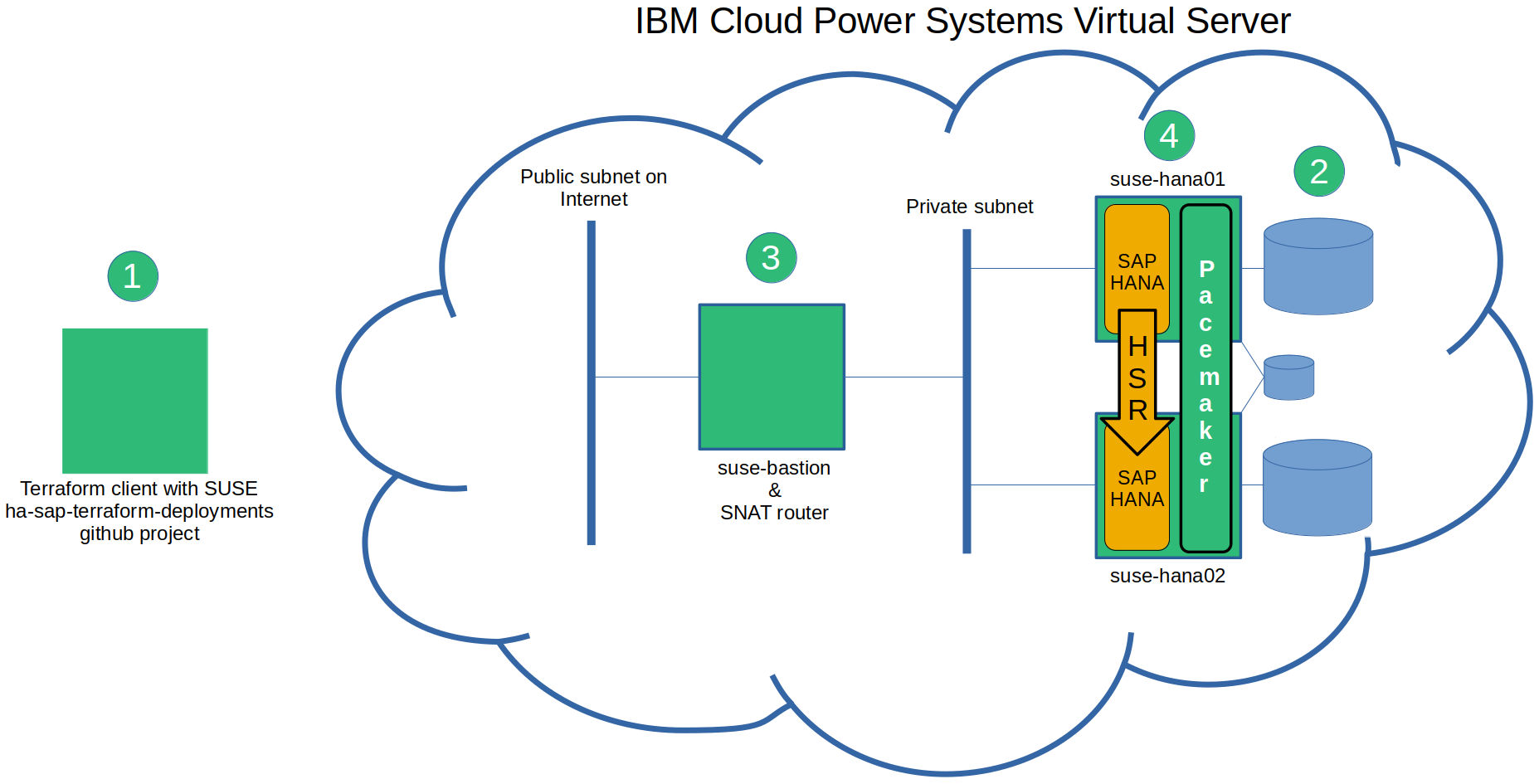 First, to prepare the automation for your environment, clone the github project locally on a Terraform client. Edit the terraform variable file which defines what the automation will do. The “terraform apply” command starts the deployment by communicating with IBM Cloud.

Second, Terraform instructs IBM Cloud to create PowerVS storage LUNs. Multiple LUNs are being created that will be assigned to the instances where the automated SAP HANA installation will be run. Each HANA instance gets its own dedicated LUN to store data and log. A shared LUN is created and assigned to both SAP HANA instances, and used by SUSE Linux Enterprise High Availability Extension (Pacemaker cluster) as a STONITH device. The Pacemaker cluster will automate the takeover of HANA System Replication in case of primary system failure.

The timer in the demo measures the time taken from starting the “terraform apply” command to the end, around 1 hour. Such setup may take days or weeks if done manually. What’s more powerful than the time saving is the avoidance of human errors, and the ability to replicate a test/dev environment using exactly the same parameters.

If you are interested in testing the PowerVS automation in IBM Cloud, you can find the Terraform and Salt in the SUSE github project for IBM Power Virtual Servers running in IBM Cloud. For any questions, you are welcome to leave in the comment section or contact the IBM alliance at SUSE mailing list.

Another great piece of work from Mike, I am proud to be working with Mike on PowerVS to show case SUSE automation, Award winning software from SAP and our very own IBM Power Systems Virtual Server.

Thank you Graham.  I am honored but the real praise goes to SUSE engineering that created and maintains the https://github.com/SUSE/ha-sap-terraform-deployments project/.