A World Forever Changed by Fintech and Crises

With unprecedented and disruptive change affecting economies throughout the world, financial technology (fintech) holds the promise of delivering financial inclusion and innovation in both advanced and emerging market economies. Yet, some also believe fintech bears the flip side of the proverbial coin (bitcoin), calling it a speculative bubble that will crash and burn fortunes.

The cost of delivering finance skyrocketed as a function of tighter regulation post- 2008 Global Financial Crisis in developed economies. However, this also led to an explosion of fintech from Bigtech and small fintech startups offering new business models, products and services.

China, the 2nd largest economy in the world is a stark example, 16% of its Gross Domestic Product (GDP) is made via mobile technology in payments, largely driven by wide adoption and usage of Bigtech platforms like WeChat and Alipay. The United States on the hand has less than 1% of its economy (predominately credit cards via AMEX, Mastercard, VISA).

Similarly, you might have encountered when visiting Japan where it is widely known as cash-loving country, although it is also now changing due to COVID-19 pandemic.

Let’s discuss how the modern banking system originates and then explore Fintech in different contexts and use cases.

History leading up to the Modern Banking System Financial Services

The ancient Sumerians in Mesopotamia (present day Iraq) first used money to facilitate exchange as measure of value. Units of value thousands of years ago were could even be shells or beads. However coins minted in gold and silver with the first real currency, the Mesopotamian shekel dates back to 650 and 600 BC. The Chinese were also known to use coins 1600 yo 1046 B.C. during the Shang Dynasty period Coins. were very successful as it has attributes of portability, durability, transportability and inherent value. 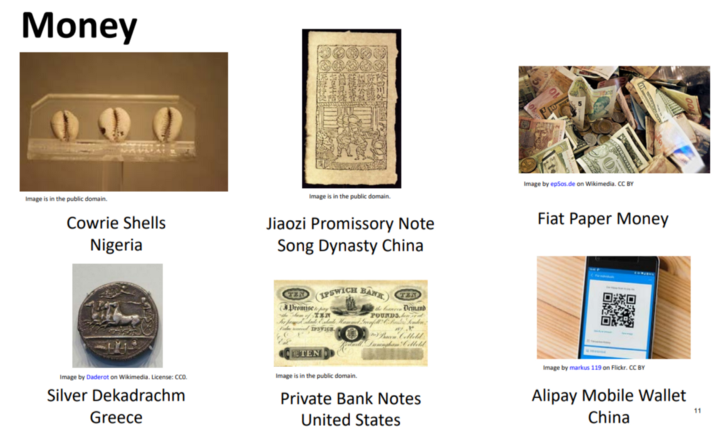 During the Tang Dynasty (618–907 CE) merchants started to leave money (gold/silver coins) with a trustworthy agents and there will be promissory note being exchanged (not true paper currency as this a private arrangement). It was the Song Dynasty (960–1279 CE) who first invented a real paper currency after the imperial authorities took control of the system of direct deposit shops and produced a state-backed currency systems. Thus after, money became the instrument of political control.

The modern banking financial system as we know today however is an European invention. The Medici family from Florence, Italy first opened the family bank in 1397 and introduced double entry bookkeeping, letter of credit and the holding company model. In essence, their enduring legacy could be expressed in this equation “Assets = Liabilities + Equity”.

Now, let’s explore some of the basic Fintech that has first emerged circa during the Global Financial Crisis.

The patterns of fintech payment adoption in the world have been interesting as it does not reflect the state of economic development or political ideology. Fintech is crucial in developing and emerging countries like Kenya and India with their large populations. We have seen the interesting use of basic mobile technologies SMS on feature phones with the M-Pesa platform. From 2007–2021, this fintech mobile platform has now grown to serve 79 percent of the market (48 million customers), removing significant barriers to entry to previously unbanked and underserved population. India also seen a tremendous surge from 53 percent to more than 80 percent of its adult population following the higher adoption of cheap smartphones and development of more advanced technologies in Application Programmatic Interfaces (APIs) compared to Kenya’s reliance of older technologies. With that, we now discuss what are some of the more popular and commonly known use cases of artificial intelligence in finance.

Now, if we look into the history of modern banking systems innovations to-date in the areas of funding and risk management, we have evolved from the rudimentary private bank deposits to the machine learning models for loan underwriting.

Benefits include reduced default rates, increased approval rates and also regulatory compliance. The Medici’s would have loved to have these technologies for sure!

On the other hand, the risks associated with these algorithms include potential biases in lending on targeted segments of the population. This is prohibited by law. 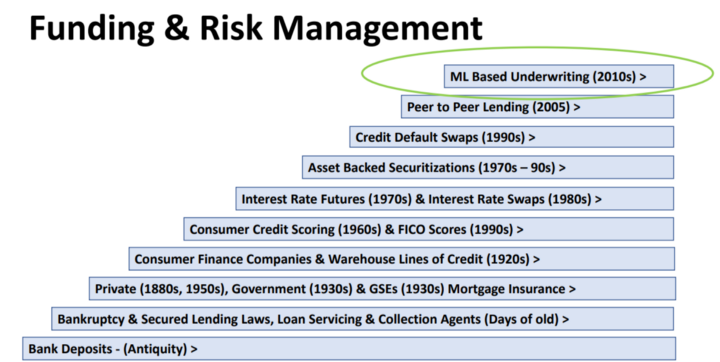 On the customer frontend, we have really evolved through the tents and temples of Mesopotamia to the chatbots that we consumers use to today to communicate with your bank. Over the course of 4000 years, the way we bank has changed so significantly, that we have not even realized it. An example of a chatbot is Bank of America’s Erica with19.5 million users and 105.6 million interactions over period of 3 months in the first quarter of 2021. Again, this can attributed to the result of the COVID-19 pandemic with significant drop in physical visits to the store. The classical bank we know of today has been under pressure in the past decade from challenger banks (small and nimble fintech) startups using AI.

It will be of interest to everyone to understand what other financial technologies how it will affect trends in the world of finance and eventually our wallets. I will attempt to my learnings with the key points here:

Open banking is the sharing and leveraging of data by banks with third-party firms to build applications and services. The data however needs to permissioned by the customer. This opens up opportunities for real-time payments, market and cross-selling for firms and greater financial transparency of the account holder.

Various countries are at stages of implementation and development. Singapore for example has introduced the world’s first cross-border open architecture platform APIX with principles with its regulatory authorities publishing a Finance-As-A-Service API Playbook with standardization as their framework. 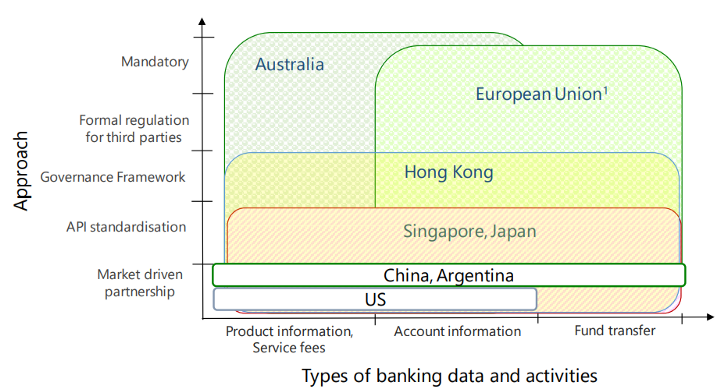 Australia on the other hand has been slow to uptake as banks are unwilling to invest in new products and features because of a perceived lack of consumer demand. Since its launch in 2020, only two use cases have emerged in the market. Full data transfer consumers will only become available on 1 Feb 2022. So, with the different approaches, countries are not uniformly the same in terms of market penetration and growth.

The benefits for customers are nonetheless going to be super impactful. Just imagine being able to sign up easily in real time for new credit/debit cards, getting your home loan more efficiently and reducing the switching costs of moving from one bank to another.

What is there to talk about blockchain and cryptocurrencies other than the frenzy Bitcoin investing, initial coin offerings, stable coins? Recall back in July 2021, the speculative surge in price of Dogecoins after Elon Musk tweeted about it and crashing violently down after he made his debut in Saturday Night Live (SNL) performance.

However, blockchain is more than just investing. It has many use cases below:

There has also been new market opportunities in Non-Fungible Tokens (NFTs) which are part of the Ethereum blockchain. A new digital market for unique art for example, Everydays: The First 5000 Days was sold by Christies for $69.3 Million. See below, I got it for free 😊. Again the debate rages on whether NFTs are speculative bubble or virtual paradise of riches. 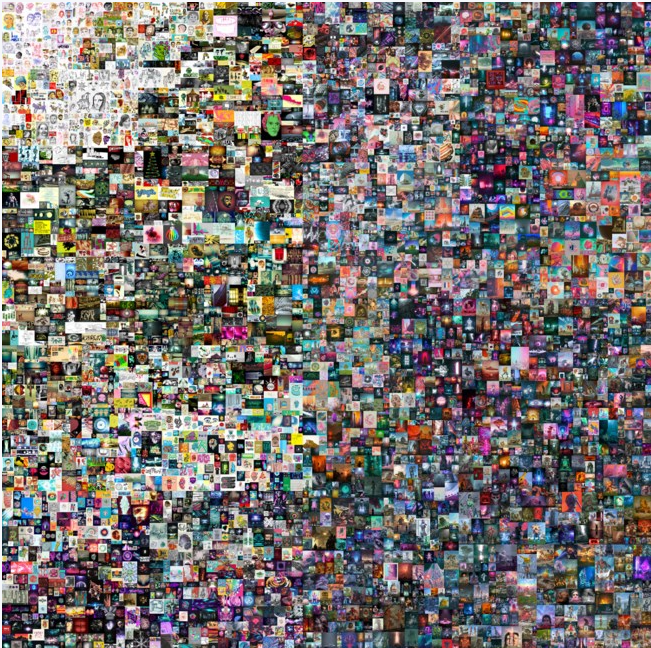 The question therefore is about what do we humans consider as a ‘store of value’. In the past, it was physical metals like gold, will the future about bits and bytes as fiat currency as central banks worldwide begin to issue their own digital currencies as they battle for control against decentralized cryptocurrencies. Most notable would be China’s digital yuan which is in pilot launch and direct competition with Big Tech’s payment mechanisms like Alipay and WeChat Pay. This will be discussed in the next section.

Perhaps the most aspect of a financial system is the ability to make payments securely and efficiently at minimum cost. The history of modern payment systems started with evolution of personal checks, telegrams, to credit/debit cards, digital wallet payments and to cryptocurrencies today.

The central bank is in effect in the middle of the modern payments system for all commercial banks outside the cryptocurrencies method of payments.

Now, the question now remains whether bitcoin payments can be traced since it is decentralized and do not go through these normal legal channels.

The answer is yes, the government can still trace these payments especially in the event of a malicious activities like the Colonial Pipeline ransomware hack whereby the US Justice Department was able to recover 64 out of the 75 bitcoins that were paid out to the hackers by merely reviewing the public visible bitcoin ledger.

The future trends for payments are nonetheless clear, Big Tech firms like Alipay, Wechat, messaging apps like Facebook and cryptocurrencies (decentralized or central bank backed) will rule over. Fintech unicorns like stripe and Wise (formerly known as Transferwise) are some examples.

In terms of credit, the buy now, pay later payment model through integrated shopping Super Apps are now also becoming crowded as other Bigtech ApplePay, GooglePay and banks starting to join in the fray. 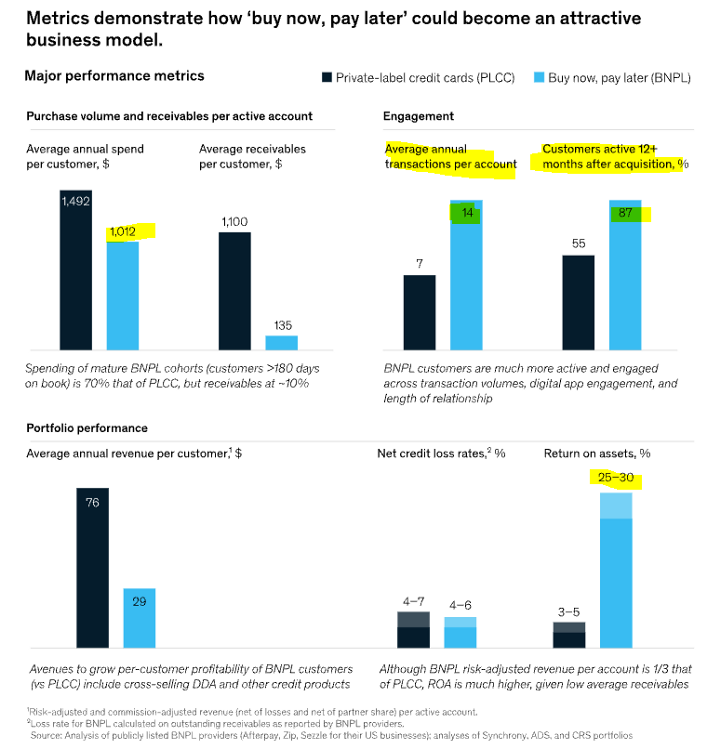 According to Mckinsey, Although transaction sizes are small (between $100-$110), there are high frequency of use of up to 20 times a year, with annual spend of slightly above $1000. Engagement of these super apps are also very high with repeated usage. During the COVID-19 pandemic as it grew 300 to 400 percent in 2020 and accounted about $15 billion. Mckinsey estimates this will increase to $90 billion by 2023.

As of October 2021, with nearly 170+ startups, challenger banks and traditional banks,, This point-of sale credit financing for consumers are flooded with competition as the market opportunities are huge and profitable.

Some have argued about the amount of unsustainable debt that this will bring to consumers and the United Kingdom have started regulatory reviews. It remains to be seen how this business model will turn out.

In 1959, US President John F. Kennedy used the well-known quote about the Chinese words for crisis consisting of danger and opportunity although it is linguistic blunder, many still mistakenly repeat it various fields.

In the spirit of this article, I would however would like to propose this quote

“Danger and Opportunities Abound in Fintech After Crisis Events”

This article was first published here

this is a very comprehensive post with links and references to many places on the internet.

unfortunately, there is a risk of my comment being removed because it does not address how your topic at hand relates to what is happening in the SAP ecosystem.

i wish that i could address the subject matter in some depth but i don't want to dedicate more time if someone flags this post and marks it for deletion.

Cheers and thank you for sharing your fintech ideas.

The article is written from a business trend perspective. Thanks.