Especially with the new development around Advance Shipping and Receiving released in S/4 HANA 2020 OP the Overview, as the central place for execution processing, became one of the most important screens in our Freight Order. But as we learned from Ben Parker “with great power comes great responsibility” and in our case this is the responsibility to serve and handle also customer specific requirements/enhancements.

As the overview is a completely transient UI, which is built up over different entities and not based on FBI with a direct mapping of views to BO nodes, the enhancement process is rather specific and requires some knowledge around the underlying UI framework we introduced called TBI(Transient BOBF Integration) Sidenote: at least it is since 9.4, for the long term TM supporters you might remember the old BO transient node TOR~Overview.

In this two part enhancement guide series, I will describe the steps necessary to enhance the overview by a custom column filled by a field from a persisted field as well as a custom action to change this field as per the example requirement described below. The first part will focuse on required DDIC, BO and ABAP enhancements while the second part will mainly include the corresponding enhancements in the FPM layer.

Remark: Several Steps could have been performed in a different way, e.g. using customize component on the FPM side. Feel free to comment if you want to share any best practices from your projects on how you would alternatively tackle such a requirement.

Requirement: The customer wants to add an additional status to the WH Load/Unloading Stop Level. This Status should be nicely visible represented by a traffic light on the corresponding lines of the TOR overview. The user should be able to change the status on either a single or multiple Sub-Stop instance at once, as he wants to e.g. trigger PPF activities based on the status.

An additional NFR is to not do any enhancements or modifications to any ABAP coding.

In this section we will take part of the structural changes on the backend object, that will enable us to store and manipulate our customer specific status.

This is a well known step for most of you and mainly included for the sake of completeness.

To properly enhance the structure of an existing standard BO node, navigate via the BO to the structure assigned to the BO node. In our case, for the TOR~STOP node, this is structure /SCMTMS/S_TOR_STOP. Identify the named include EEW, this is the include intended for customer appends, which is part of every major TOR BO node. Navigate to the underlying structure of the include (/SCMTMS/INCL_EEW_TOR_STOP). Click on Append Structure and create a new structure as per the naming convention of your project. Include a field in your new structure with a data element required for your scenario. In our scenario the field MY_STATUS, will be a “boolean” and only have 2 values X and blank. Save and activate your changes.

Make sure that the activation was completely successful. Specifically check that DB table /SCMTMS/D_TORSTP is active and includes your new field. Speaking from experience, missing authorization and ending up with a partially active DB table, is a save way to project visibility. 😉 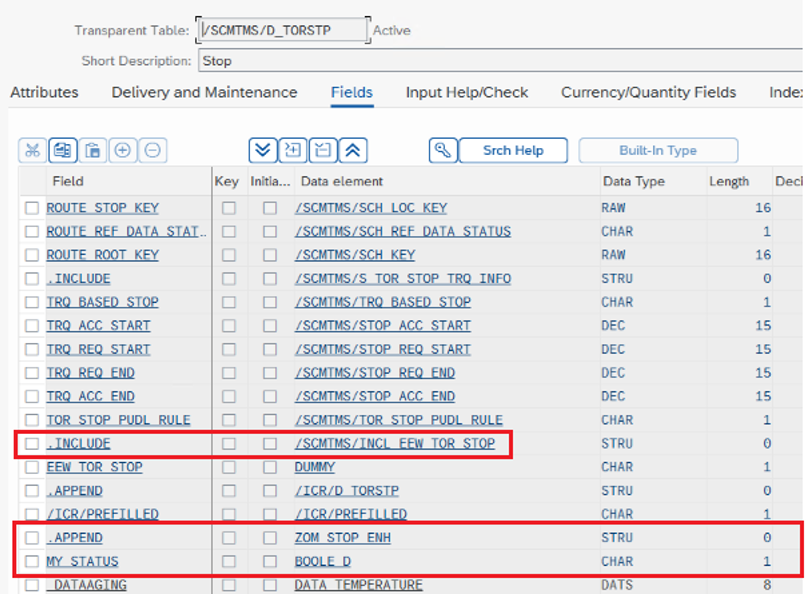 Enter the name of your new enhancement business object according to the naming conventions of your project. For Super Business Object enter /SCMTMS/TOR. 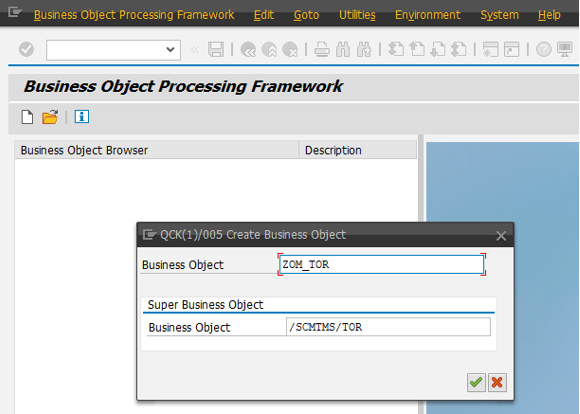 In the result tree you will find a new a new entry for your enhancement Object. 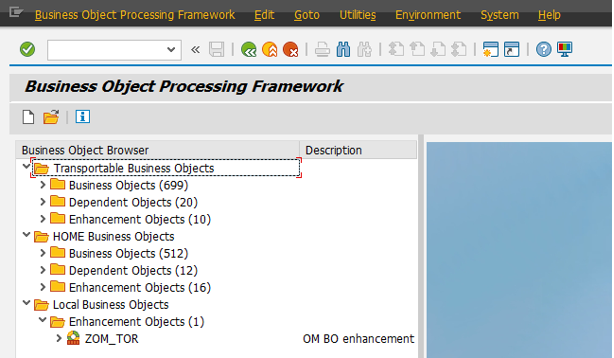 Navigate to your enhancement object. The Object contains the structure of its original Super BO /SCMTMS/TOR.

(You can also use the propose repository name functionality before to name your constant interface).

In the node tree of your Enhancement Object. Navigate to Node STOP -> Actions. Right click on folder actions and select create Action.

Create Action with the name SET_MY_STATUS_X.

Set the action cardinality to Multiple Node Instances, as we want to be able to set the status for multiple stop instances via a single action call.

For this simple case we will use the same implementation class to handle both actions, setting the status to X or blank.

In the newly created class navigate to tab Interfaces and add the BOBF action interface /BOBF/IF_FRW_ACTION.

Navigate to the tab Methods and implement interface method /BOBF/IF_FRW_ACTION~EXECUTE. In the simple example logic below, we set the MY_STATUS field on the corresponding stop to either blank or X, depending on which action is currently called, which can be identified via the is_ctx-act_key, so we can use a single action implementation for both BO actions.

Assign the implementation class to the previously created BO Actions and save your changes. 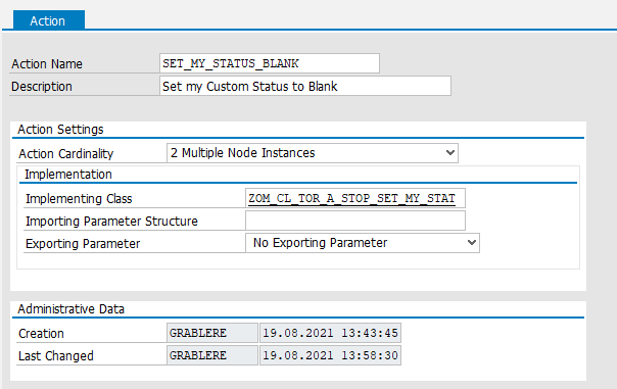 The standard overview uses structure /SCMTMS/S_UI_TBI_OVW, which defines the field catalogue(columns) for the Overview tree UIBB. In Order to enhance our own Overview UI, we must create an enhanced version.

Via SE11, create a new structure that contains the standard structure as an include and your custom fields in addition. In our case we add the status itself + an icon representation of the status. The suffix TRA is added as the Feeder Class buffer will use this suffix later for the include, we will append.

The buffer is constructed of multiple named includes that are mapped again to the corresponding backend instances, which are included in the corresponding UI instance + a transient include for all kind of fields which are not mapped to a certain instance.
For example take a location entry from the Overview, which contains information from multiple instances: the root, the departure stop it is representing, the arrival stop it is representing.

In our case we will keep it a bit simple and will just add the fields to the transient include, as this gives us the most flexibility to adapt to requirements, where the status should be available on other intance e.g. for items. This is for example also the case for the handling execution status, were you have a single column but it is filled from different backend nodes depending if we are on an Item or Stop entry.

Therefore we will append the same structure we added to our Stop node to structure /SCMTMS/S_TBI_BUF_UI_OVW_TRANS.

Now the actual interessting part can start as we get to the enhancement of the new TBI based feeder class. The standard Overview UI uses feeder class /SCMTMS/CL_UI_TBI_TOR_OVW_BO and our own feeder class will inherit from the standard. Therefore create the class as described below:

Navigate to tab Methods and create a redefinition for:

So much for Part 1. With these steps performed, we are ready to consume our new feeder in the UI and create the new UI artifacts, to fullfil our customer requirement, which we will do in the second part.

Find the conversation on LinkedIn: