Integration Suite is the future-proof and strategic integration platform from SAP with a long term roadmap. This is the recommended solution from a product strategy perspective.To help developers/customers working on migrating integration scenarios from SAP Process Orchestration to SAP Integration Suite, we will be starting off with series comprising of multiple technical how-to guides.

In the below blog post we will see how to move Graphical Message Mapping from  SAP Process Orchestration to SAP Integration Suite.

What is currently supported:

Message Mapping not having any requirement of User Defined Functions and Lookup logic can be imported into Cloud Integration by following below step by step video tutorial.

Message Mapping having User Defined Functions and without lookup logic can be imported into Cloud Integration by following below step by step video tutorial.

What is planned for future release

With the release of Message Type and Data Type editor in SAP Integration Suite it is possible to reuse existing content from SAP Process Orchestration.

What needs to be reworked and how

Parameterised mapping was one of the key aspect of SAP PO to avoid design time changes and provide flexibility to developers for managing the key parameters at Configurations to further reference in message mapping.

With the move to Coud Integration, Parameterised Message Mapping needs to reworked and parameter externalization can be used  to simplify the same.

Create parameter and bind the same in operation mapping

Map the value of same to output field. 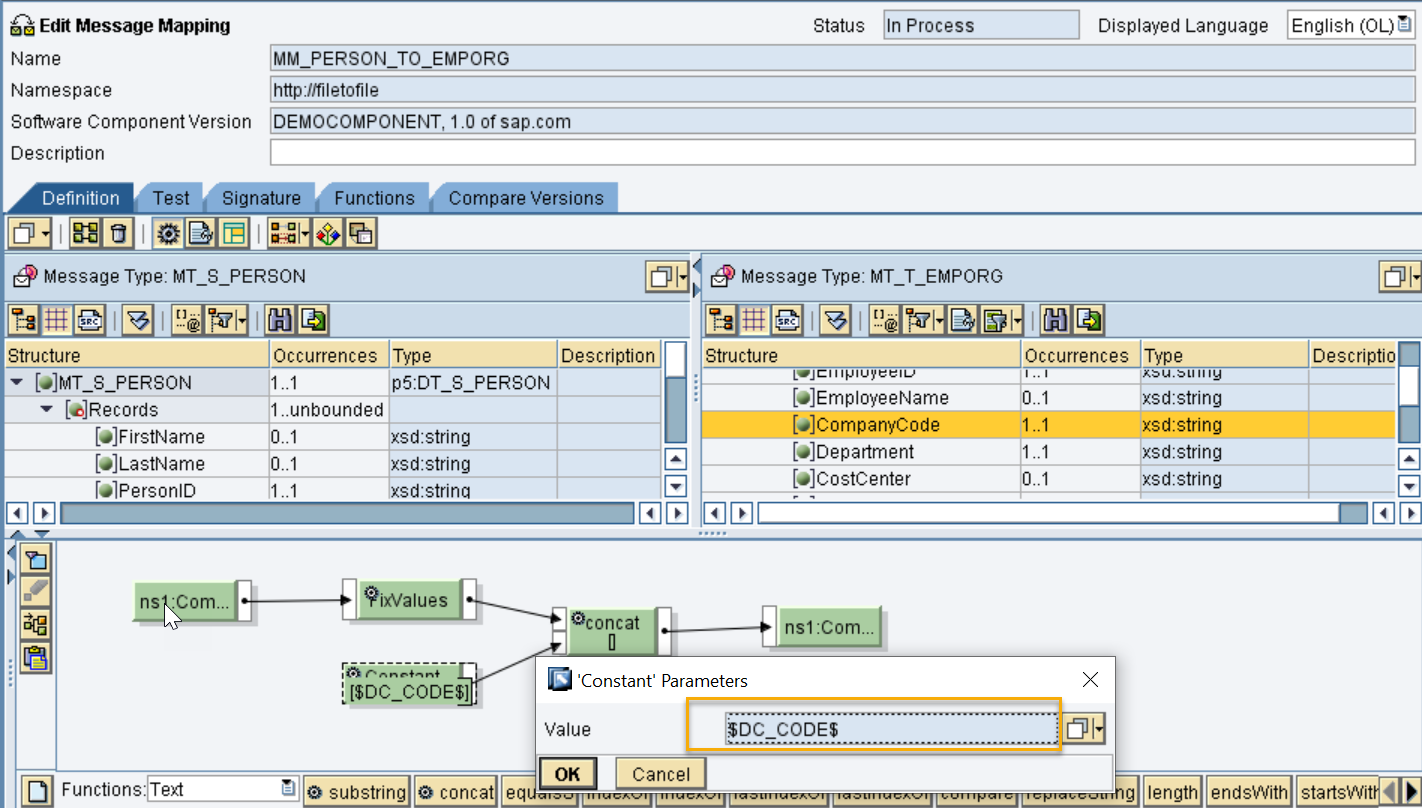 Bind the paremeter in Operation Mapping

Pass the value from ICO- Receiver

Steps to achive the same in SAP Cloud Integration:

Add content modifier and create header with name DC_CODE with below configuration so that values can be passed runtime.

Create a custom function in your imported message mapping and perform the same logic.

I do like your idea for the Parameterised mapping. I would probably recommend setting it into parameters and not headers. (The headers will be sent to external parties in ie HTTP adapter)

I think we will try to adopt this approach in our migration tool to simplify some processes.

We also have support for Function Libraries and RFC Lookup.

Thank You and agree setting as header would spam receiving system if in case not filtered properly in integration process ( usually most of the receiver adapters have explicit option to clear headers before sending the data to receiving system ).

With the release of Message Type and Data Type editor in SAP Integration Suite it is possible to reuse existing content from SAP Process Orchestration.

so message type editor is not released yet as I got from roadmap? so how message type are organized now in Integration Suite?

Message Type and Data Type are planned for Q4 2021.Please keep a watch on this blog series and will give complete details as soon as its available.

Thanks for the great blog. Will definitely help in the migration process. Day by day SAP Cloud Integration is getting better and better.

Thanks for the idea we added the automatic migration of the parameters to our migration too.

We use much the same UDF but wanted to just have one UDF and then use the parameter from the constant.

We have a short video about the migration process.